The Eye Of A Tiger

We've been away on vacation and getting ready for the week off has tied me up more than expected. This update is actually from 2 weeks ago so disregard the date on this post and realize that all you are about to read happened during the second week of September. Look for this weeks blog to be posted Friday night (we just wrapped up classes for this week tonight (Thursday)).

Janice has completed the last window of this pattern! I think she can do them in her sleep now. She still has a few more to go but they will all be made from the secondary pattern. But before she starts those she plans on taking a bit of a break and work on a window for her son. 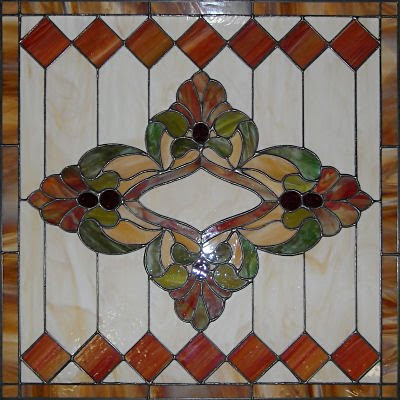 Julie accomplished a lot this week when she began cutting the background pieces of her window. She got the laurel wreath section tacked together and then cut the glass between it and the rose. After that was ground and wrapped she tacked it into place and then got the right side of her window's background cut and ground. She took those pieces home with her to wrap and will tack that section together during her next class.

Cheryl began working on an LSU/Tiger window but I forgot to take a picture before she walked out the door with it. So I've found some early pictures of the last one she made and am re-posting one of those pictures to let you see just what it is she's working on. Regrettably, one of Cheryl's cats jumped on her project and broke 10 pieces when it landed on the floor. It's a set-back but only a slight one. She'll be back on track when we see her again during the next class.

Grace has the front side of her window almost completely soldered. There's no doubt in my mind that she'll flip it over and begin the back side of her window during her next class. We're removed it from the board that it was built on and I must say that it's a nice and sturdy window when you lift it up. 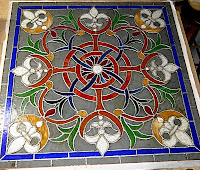 That's about it for the second week of September. As I said, I'll have another post for this week on Friday evening which will bring us up to date again.