We had a birthday feast for Russell on Wednesday night thanks to Janice, Cheryl and Grace. The cake was (as always) to die for. Thanks to everyone who had a hand in this for the wonderful food.

Grace has completed her first box. She had a hand in every part of this right down to the design of the 'invitation' to the left of the stained glass flowers. It's very pink and came out perfectly.
Grace will be starting an LSU Fleur De Lis window next week. 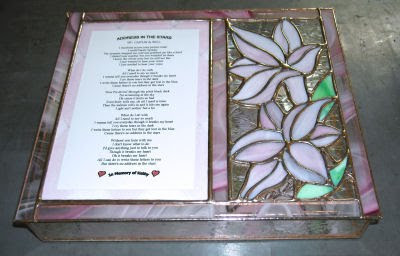 Cheryl worked on 3 box bottoms and then attached the lids to all 7 boxes. She's well ahead of time for Christmas and that's always a good thing. I wish I could take note on this strategy! Don't these look great? 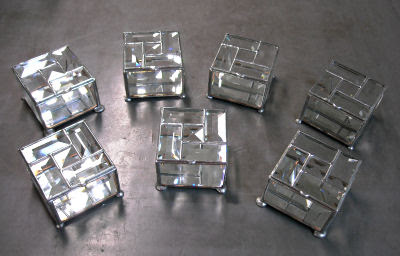 We had a Camille begin classes this week which means that we have a new butterfly to look at. Camille chose different shades of purple for his butterfly but the shading of the glass didn't photograph well since there was no sunlight left in the day at 9pm. :-( Still, this gives you an idea of what he accomplished on his first night. Camille had no problems whatsoever and I think we're going to see some wonderful work from him in the near future. 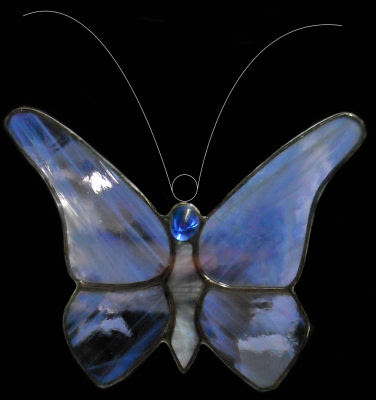 Patty has her border attached and the front side of her window all soldered. This one is going to be finished next week and I must say that the pearls added a certain style to the window. They're hell to solder but the more work you put into a window the more enjoyment you'll receive from it.

Janice has cut her last piece of glass for this window. With her borders all cut and tacked into place she began soldering this beast of a window. Don't forget that the size of this is 4 foot by 3 foot which makes it very large. Alas, soldering it should be fairly easy since there aren't many pieces and there's not many lead lines. 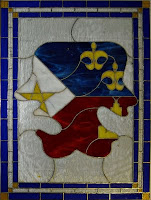 Just look at Steve's Turtle! With everything cut but the small pieces on its head and legs, Steve is making excellent headway with his window. He cut his large sections of water without even batting an eye. He'll begin grinding this next week.

Jane began working on her lamp. This is the mold with the pattern attached to one section. She'll make 6 sections and join them all together to make a completed lamp. She plans on making 2 of these but is working on them 1 at a time. She's discovered that the recommended amount of glass is GREATLY overestimated by about one third. She was pretty sure she didn't have enough glass for her secondary color but we got all the pieces out with some left over to spare in case there's breakage. 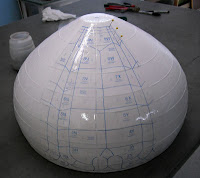 Pam is back in from Texas and decided to come to class so she could make a cross window. She got the cross cut, ground, wrapped and tacked together and half of her background is cut. She plans on working on this while she's staying at Jane's. 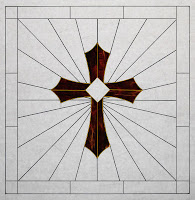 That about wraps it up for this week. We'll have a lot of new projects starting next week so come back and see what get's laid out on the cutting table next.