'Point to Point' is NOT an option

[edit: Well apparently I never pressed the POST button before I left on vacation 2 weeks ago. I came here to write up the events of last week and found this sitting here unposted. Sorry about that Myrt!]

We hear it all the time and I can never say it enough. When you cut an inside curve the first thing you have to do is cut a straight line from the staring point to the ending point and break away that excess glass. If you don't you will most surely break the ends off of your curve or even break it in half if the curve is very deep.

That said, it looks like Myrt has paid attention to that rule. There are a lot of inside curves on this window and as you can see none of them are broken. Isn't this a nice window? It's always been a favorite subject of mine so it's always a pleasure to watch a student make one of these Moon/Sun combinations. Myrt was even able to use glass globs for the eyes so they're rounded rather than just plain flat glass. She played around briefly with the idea of a two colored border but in the end the red glass just looked best surrounding the entire window. Good job Myrt! 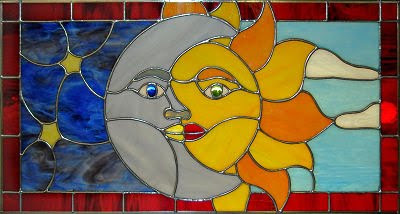 Terry is moving right along with her Mardi Gras Mask window. Not only does she have it all ground but it's all wrapped now as well. She's taking it home with her to tack together and when she returns in 2 weeks she'll begin cutting out the background glass. 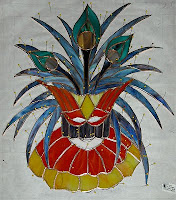 Ray has completed all the glass cutting for his window and has moved on to the grinding process. He still says he's worried about soldering this but he's got nothing to worry about. No matter how bad someone might be with their soldering they can't be any worse than I was way back in 1979 when I made my first project. And the best thing about soldering is that you can do it over and over until it comes out the way you want it. Ray has nothing to worry about. 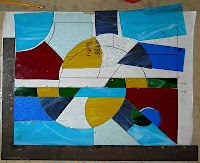 Paul ground his clear pieces to his terrarium and made sure that everything fit together in this wooden frame that we made. This will insure that all his sections line up perfectly and that all the straight lines are straight. He has only 28 pieces to go before he starts putting the bottom of this together.

Since Paul didn't want to waste time in class wrapping the pieces that he'd finished grinding he decided to start a quick small project to work on while his first one is 'tied up' (so to speak). He had seen this suncatcher on TV, made a pattern of it and brought it in to glass. Before the night was through he had cut it all out of glass. Now there's a guy who's getting a lot accomplished in a night. :-) 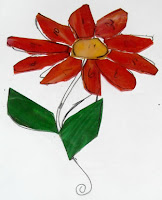 Jane's lamp is just about ready to be colored and cleaned. She soldered it at home and I did some minor touch ups before she took it back home to solder the inside. I'm going to say that this will be completed when we see it again. The big question is which lamp will she be working on when she comes back in? It's either going to be another color variation of this one or she'll start making another of the previous lamp that she made (see it here). 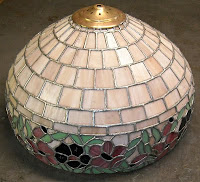 That about wraps it up this week. I want to remind everyone that we'll be away on vacation next week so it will be 2 weeks before we get to see these projects (and others by the students that couldn't make it in this week) move further along to completion.

[edit: better late than never, right? Luckily everyone remembered that we would be gone and no one came in the following week.]