We have a lot of finished projects this week and more than a few windows still under construction. Before you know it they'll all be finished but for now let's see what everyone is working on this week.

Terry has completed her Egret window just as I predicted she would last week. She was worried about how the grey and the white would mix together but I honestly believe that she has nothing to be concerned about. And her choice of glass for the sky is stunning. 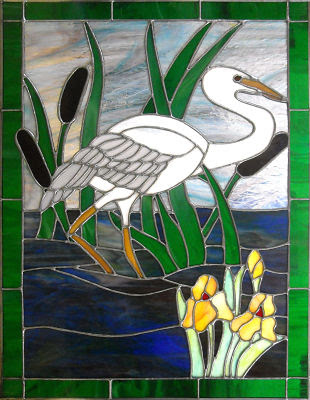 Pam's second box came out every bit as beautiful as her first one did last week. This one has iridized glass on the lid of the box. On solid colors it's a nice subtle effect that adds that little extra something to the project, not that this needed something extra to look great! 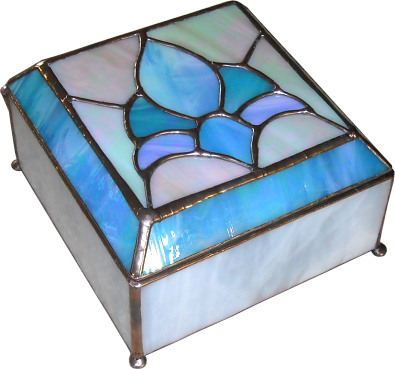 Patty has completed her 8 cabinet door inserts right on schedule. I only have one pictured because the second one didn't photograph very well. Besides we've seen these before so I think it's plain to see that Patty knows what she's doing when it comes to making these inserts. 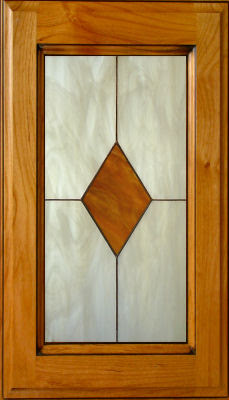 Next up we take a look at another box. This one was made by Susan and it's a flat topped box with a tasteful Fleur De Lis design. To be honest, the color placement went against almost every rule I have but sometimes rules are made to be broken. This Amber/Gold Box has a beautiful baroque glass background with matching sides. The baroque glass has just a hint of the amber/gold color running through it which ties everything together perfectly. 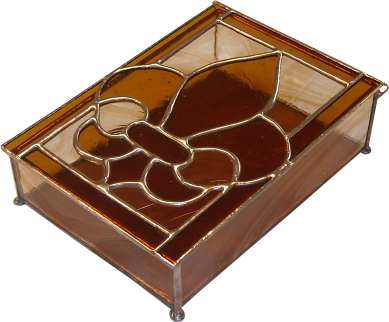 Cindy's Louisiana Tiger Eye Fleur De Lis got the finishing touches put on it this week. When she brought it in all it needed was some hooks to hang it by and a good bath. Cindy opted to leave the lead on this silver because it really stood out nicely against the black baroque glass that she used for the border, trims, and the main body of the Fleur De Lis. 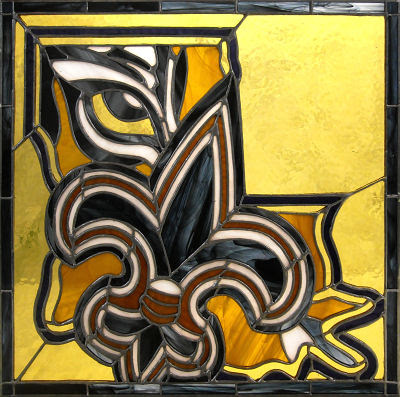 Cindy also brought in 4 more hand mirrors that she made at home. For some odd reason I only have 3 of them on the camera even though we both recall my taking pictures of all four of them. Cindy added a little something to 2 of the mirrors pictured here. Did you notice the initials Z and S on the left side of the bottom 2 mirrors? 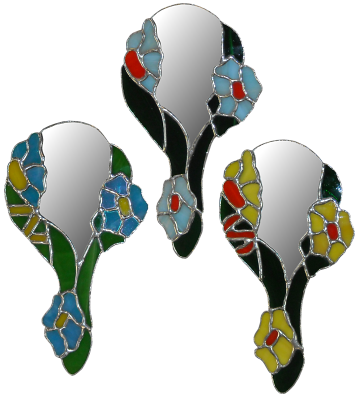 And just because she's Cindy she also made progress on her Fleur De Tiger Eye. There are a lot of tiny, thin pieces in this pattern but Cindy prefers working with small pieces rather than large ones. Myself, well, I'd much rather work with larger pieces than smaller ones. But like I always say, The extra work that you put into a window shows itself in spades when the window is completed. And Cindy's Fleur De Tiger Eye will be no exception. 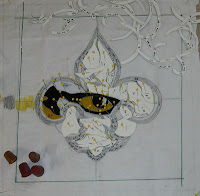 Sonia's Pokeno Girls are really fleshing out now. She ground the flesh colored glass to fit and got everything wrapped and ready to be tacked. The girls still need some hair and some shoes but after that it's all background. 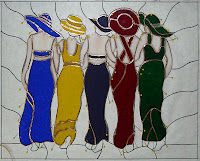 Pam not only worked on her latest 3D topped box (as seen above) but she also worked on this flower window as well. It's about 12 inches tall by 5 inches wide and the only thing left to do before this project is finished is to solder the back side. I know Pam will do that while she's at home so I'd expect this to be completed shortly.

Fran is making more of her 'patented' Diamond Fleur De Lis Windows. She would have had the border cut for this one but she forget to bring the glass with her and we didn't have any more in the shop. I believe that she has a second FDL cut out already for the next one so we'll be seeing a lot progress on these when she returns.

Bonnie's Saints Fleur De Lis is just about finished now. The front has been completely soldered and the lower letter portion of the window has been soldered on the back side (as you can see in the photo). This one will surely be wrapped up when Bonnie returns. 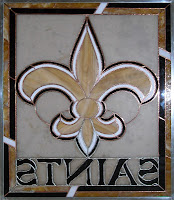 Ann's got all of her Flower Window cut out and has even begun grinding it already. She's started in the upper left corner and you can easily see how it's beginning to fit together. She said that she's not sure about some of the colors she has chosen so we might see some changes as she grinds this project. But sometimes it's difficult to tell just what a window looks like until everything is fitting together so perhaps there won't be many changes at all. Either way, her window is drawing a lot of attention from the students in the other classes, and for good reason.

Myrt has made big progress on her Traditional window. Now that it's all cut out she can begin grinding it. Although the pattern only has 1 border drawn on it Myrt's toying with the idea of going with a double border. I've always loved the look of a double border and think this window would look great with a second row of glass surrounding it.

The first window we looked at in this update was Terry's completed Egret window and now we're going to end this post with a look at her latest work in progress. She's making her own variation of a Rooster Window and it's really looking good. This is the most realistic rendition of a Rooster that we've seen so far. It's not so much the Rooster itself that makes it realistic-- it's the grassy foreground that really sells this window. Expect to see this one completed next week since Terry will be working on this one at home during the week. 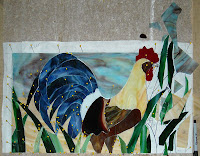 And with that we'll call this a wrap.