Cindy's Pelican Window has now been officially completed and has flown out the door.  This is a nice pattern and Cindy did a great job on it.  I love the way the purple in the sky is reflected in the water.  And the contrast between the background glass and the bird is perfect so he isn't lost in the busy water and sky sections.   Since the water was cut up into so many pieces Cindy was able to use thin scraps of blue/purple that were just lying around.  Sometimes it pays to save all of those medium sized scraps... 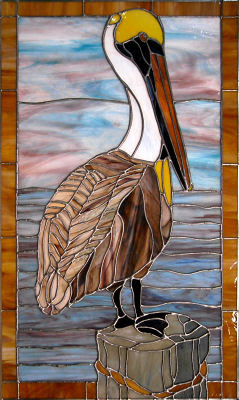 Cindy also completed this football hanging ornament that's been LSUified.  The tiger eye itself is a football but the stripes that Cindy added make it look so much more complete.  Her eye for detail can't be beat.  :-) 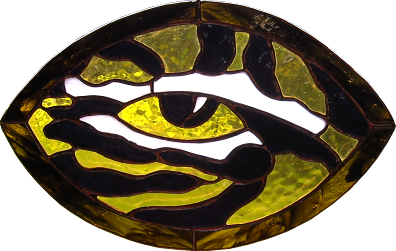 Terry had an insanely busy class this time around.  She started things off by completing her 2nd large Victorian window design and as you can see below it's a stunning window.  Her choice of colors really give this pattern a more delicate look. 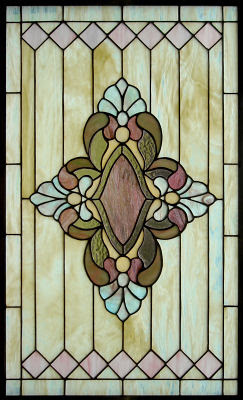 And Terry didn't stop there.  She also managed to finish this window that she made with the superfluous pieces that she cut while making her 2 Victorian windows.  Waste not want not! 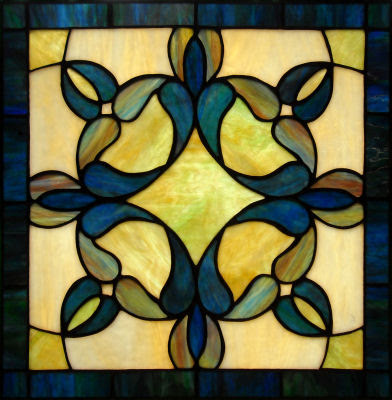 Susan finished this Lawn Ornament Pumpkin, which she now has down to a science.  For some reason I think this one came out looking particularly attractive.  Maybe it's just the shape of the pumpkin or the shade of the orange glass that she made it with.  All I know is that it really catches your eye. 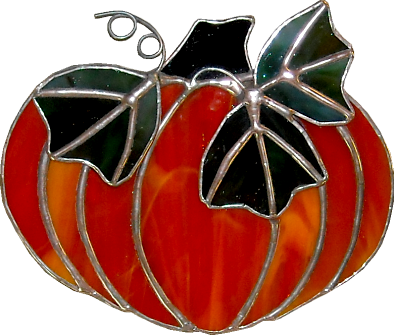 Susan couldn't decide what Holiday she wanted to celebrate so she finished her snowman this week also.  Again, this is a Lawn Ornament so it will be decorating a yard once the feeling of Christmas Cheer is in the air. 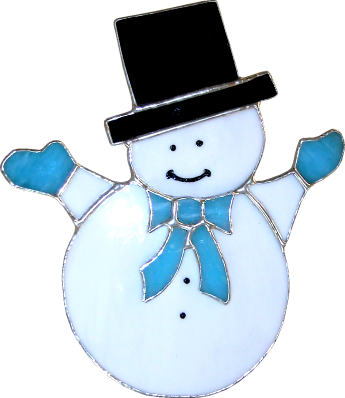 And as you may already know (if you read last weeks update), Susan couldn't wait to get started on her LSU/Louisiana/Tiger Window so she didn't let the 2 Lawn Ornaments she made stop her from also working on this window as well.  And I must say that Susan's made some serious progress on it.  It looks like there's only the Orange/Yellow left to cut and she'll be ready to put this all together.  Susan's doing a wonderful job especially when you see how many tiny, thin pieces of glass this window is made up of.  Just wait until you see this up in the air with some light behind it. 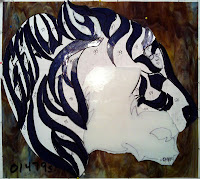 I don't think this window needs any introduction at all.  Even though it's the back of his head and there isn't a face in sight I find it hard to believe that there's someone out there that couldn't recognize Charlie Brown and Snoopy.  Sonia's really excited about this one (she's a big Peanuts Fan) and the only thing left to cut is the setting sun that CB and Snoopy are looking at  That means that Sonia is going to be standing in front of the grinder when she makes it back into class.  It won't be next week though because she and Patty will be traveling to Texas for a wedding.  I hope they eat some cake for me!

Ann has most of the cutting done for her 2 windows.  I say 'most' only because there may be a piece or two that we overlooked while tracing things out.  Nonetheless, Ann has been busy at the grinder and she's managed to get the upper right corner of this window fitting together nicely along with a good portion of the lower right as well.  I think she'll be at the grinder for another 2 weeks but when she has this all soldered and you realize just how small this is, you'll be thoroughly impressed.

Ann had a visitor this week so she ended up bringing her daughter Korie along to class with her.  Korie decided to make a butterfly rather than just sit back and watch her mother grind glass all night (which was a great idea considering how boring that can be).   Sadly, Korie won't be returning as this was just a one week deal.  I say sadly because Korie really made making this butterfly look easy.  It's just a shame that she can't be closer so she can continue with this new talent she developed.  Look at her butterfly and see for yourself. 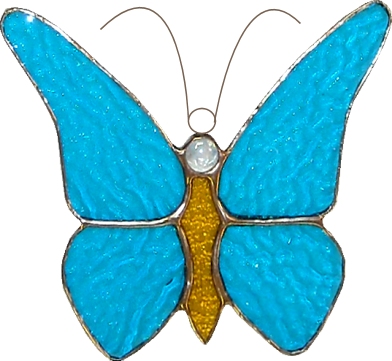 Meanwhile, Lynn worked on the miscellaneous pieces of her large door insert.  The only thing left to do on this project is to cut out the background glass.  Since they're all fairly large pieces I don't think she'll have any problem finishing this off.  We're going to cut everything from the peices you see in the picture so grinding won't be an issue at all.  Everything should pretty much fit together after it just gets a quick skim at the grinder.

Bonnie made a quick trip into class this week and left early due to a Baby Shower that she was helping to organize.  She had a hummingbird left to grind and that's what she did.  All the pieces you see below are already ground so this is going to fly together since once it's all cut she'll be able to move directly to wrapping her pieces.

Roxie, who is also working on Humming Birds managed to get 4 of hers cut out and a 5th one repaired.  She's had the 5th one for a few years now and it accidentally fell to the floor and damaged its largest tail feather.  But it's fixed now!  And Roxie will begin grinding these when she returns for her next class. 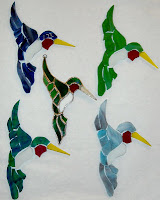 Meet Twister the cat.  Sadly, Twister isn't with us anymore so Shelley decided to make this window as a memorial to Twister.  She's got the colors all picked out to match and just to be sure there's no mistaking just who this cat is she's also going to spell out the name below it as well.  Shelley has done a wonderful job cutting out her glass and I think that she's really going to be pleased with this when it's completed. 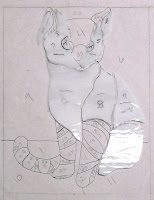 Look!  More Humming Birds!  This is Myrt's window and she's certainly got this one completely under control now.  In fact I'm going to go out on a limb and  predict that she finishes this  when she comes in again.  But that won't be next week because she has a Garden Club meeting that we can't seem to convince her to skip.  I guess we're going to have to learn how to share her from time to time.  :-(

Now, for our last exhibit we're going to take a look at the work that Martha has accomplished.  As you can see her two red Fleur De Lis' are all ground and tacked together but what you might not be able to see is that she has the background glass all cut out for them as well.  Since the background is clear glass it's hard to get a picture so you'll just have to take my word for it.  Next week Martha will be wrapping and prepping her windows for double borders. 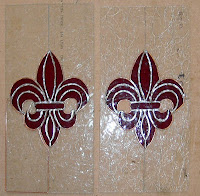 And that is going to do it for this update,  We still have one more to go this week so expect a new post Monday night which will bring us back up to date.  Until then take care and don't spit on your glass cutter no matter what you might have read elsewhere!

Posted by Bayou Salé GlassWorks at 12:30 AM