With vacations, holidays and other setbacks we've had a plethora of short class weeks.  And it will continue to be this way for the next 2 posts.  I'm still late with these updates but as I'm typing this I can say we've had our first Thursday night class in what seems like ages here. Okay, now that my excuses all out in the open let's get this under way.

Susan completed this Mickey and Minnie Mouse window that she's been working on for the past few weeks.  It's been a sort of project between projects for her.  The sky is actually a nice shade of sky blue but the sun was shining so intensely on the window when I took the picture that it washed the blue out of the sky in the photo.  Trust me when I say that in person it's a very nice blue sky. 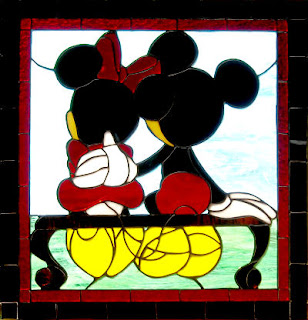 Susan also made these Mardi Gras Lawn Ornaments.  I didn't get a picture of them last week bust she brought them back so I could get a shot of them completed.  The trick to making multiple masks is simple: You cut out one blue mask and one green mask, then mixed up the pieces between them.  The two masks aren't mirror images but they ARE negatives of each other.  The only common colored piece that they share is the yellow nose... 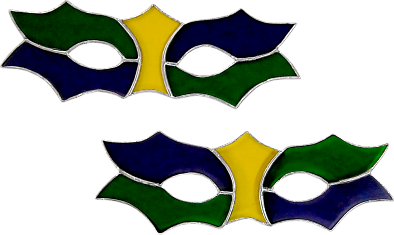 This is Brenda's version of the Pokeno Girls.  The original pattern has been elongated but the subject is the same.  Five ladies with five vibrant dresses.  This has been an attention getter each time it's been made.  With the front of this window soldered and only the back side to go (or is it the front side in this case?) I can easily say that we'll see this completed in our next update.

Brenda also worked on her latest Soccer Ball window and it's at the same point that herLadies above are at--  There's only some soldering needed on the back of this and then Brenda will be able to call this one finished and deliver it to Slone.  If I make one of these I'm going to name it Wilson. 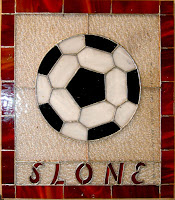 Lynn has been busy working on a pair of cabinet door inserts. This pattern (like her last one) is her own design and she has the lion's share of the work completed.  In fact, she's already begun grinding this first panel and is currently deciding if she wants to incorporate the center flower that she drew into the pattern.  She's thinking that smaller pieces might clutter the center but I think it's a personal call myself.  No matter which way she goes these will look great.

Meanwhile Martha has been assembling her State Police Badge Window. She has the hard pieces all cut out and has begun grinding the top sections so everything fits together perfectly. There's some lettering that will be painted onto the glass and we'll see what that looks like soon enough.  Until then, consider it to be a surprise unveiling.  :-) 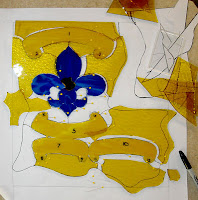 Shelley has started her next project and although it's hard to see what's been accomplished I can tell you that almost all of the clear background is cut for this Flower and Bird window.  Shelley had a break in one of the background pieces but we're going to hide it by putting a leaf in the center of the break.  When the window is completed you'll never know that the leaf wasn't originally part of the pattern.

Next up we look at Susan's 3rd project this week.  She's been working on this one at home and has made some amazing progress all on her own.  We drew the pattern last week and made sure that each of the flowers are identical but twisted in different positions which makes this much easier to cut and grind.  (There's always a trick somewhere.)   It's actually a pot, three leaves, and 6 of the same flowers just made in different colors.  This one is ready to be wrapped so we'll see what it looks like completed in a near future post. 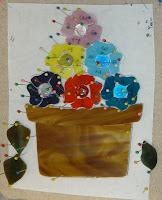 Terry's Rooster is really an amazing piece of work.  And this week we're seeing the real window not a picture of the pattern.  I'd love to count the pieces in it but I just don't have the time to begin such an endeavor.  All those pieces mean a lot of extra work and time but it pays out when you see the completed project.  This is a stunning window and my hat goes off to Terry for following it through so quickly.  With only the back side of this left to solder (it seems to be a common theme this week) you'll see this finished in our next post.  I've already seen it lit up and all I can say is, "Oh My!" 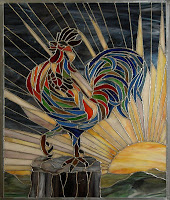 Speaking of windows with a lot of pieces, Myrt was so quick cleaning up and getting her window out to the car that I had to take a picture of it with bubble wrap covering the glass so it would transport safely.  I would have removed the wrap but Myrt wasn't taking any chances with this and had it VERY securely bound.  Trust me when I say that this is looking great also. 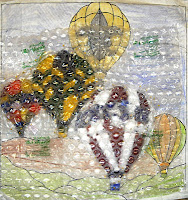 That about wraps up what happened in our classes during the second week of November. I have another set of pictures for the 3rd week all ready to go so we'll have our next update within the next 2 days, but most likely on Monday.  So expect a notification in your email and/or on Facebook!