Be a Deer and Hand Me the Flux

Well, it looks to me like Linda's Vegetable Window is ripe and ready for hanging.  This makes her old window look almost abysmal (it was hanging in her kitchen so I can't insult it too much!)  But seriously, Linda did a great job on this window and I could tell by the way she was always smiling that she had a great time making it.  And let's not forget that she's currently redecorating her kitchen to match this window... I think that speaks volumes as to how much Linda loves her latest creation.

Meanwhile this week, Mary Grace put the finishing touches (meaning the bottom tray section) on her first Stained Glass Box.  Apparently she's tried her hand at making one before but the hinge assembly didn't work out very well.  But now that she see's just how easy it is to do so she won't be having any problems with them from here on out.  Of course, it's always easy once you know the secret.  Mary Grace's Flower Box turned out so nice I'm posting 2 pictures of it--one slightly opened and one with the lid closed.

Last week Bonnie got slightly side tracked from working on her lamp so she did some last minute adjustments to it and then started this Cross Suncatcher.  This week she finished her cross, which is a  more traditional squared off design with a beveled center and 4 small accent globs that make a BIG difference in the overall appeal of the project.  The off-white cross makes the blue beads stand out beautifully, don't you think? 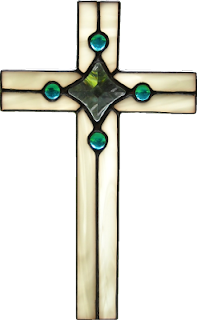 Of course Bonnie wasn't going to walk away after her cross was soldered.  She planned on getting all of her lamp assembled and tacked together-- which she did.  We don't have the brass cap attached yet but the rest of the lamp completely assembled and VERY sturdy even with just a flat bead of solder holding it together.  Bonnie will certainly begin soldering this next but first we'll attach the brass cap (for stability) that will allow it to hang from its lamp base.

Terry's lamp got assembled this week as well.   I started Terry off showing her how to place the pieces on the waxed mold and about an hour later I looked over and found that Terry had it all together.  She tacked it and then ran a flat bead of solder on everything leaving us with the task of separating the full lamp from the mold.  We heated it with a hair dryer and inside of 10 minutes it popped off nicely.  Terry, like Bonnie, will begin soldering her lamp when she returns. 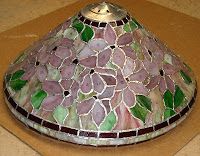 It would appear that Lamps are the 'thing' to make now.  Susan's been hard at work on her panel lamp for a while and this week she began cutting out the third and fourth sections.  With the first two panels ready to be soldered Susan is at the halfway point of this project.   It won't be long before she solders her four sides and then tacks them together to form a completed lamp.

Brenda has the front and most of the back of her Purple Ballerina window all soldered which means that this will certainly be a complete window when she returns.  She's already got her next few projects planned out and they're going to be beveled cross windows with far fancier borders than we're used to seeing.  And we'll see those get started in our next update! 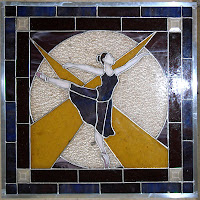 Becky came in and went right to work cutting out the green glass for her flowers leaves.  Once they were cut she then ground everything so it fit together perfectly.  She moved quickly and efficiently  and by the time class ended her glass was ready to be wrapped.  She's taken it home and if she manages to come back with her pieces foiled I'm going to say that she'll easily have the background cut and ground.  Everything fits together wonderfully and this is shaping up to be an outstanding piece. 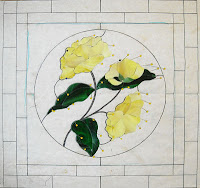 Cindy made a few alterations on her Deer's antlers and then wrapped any tacked it all together save for the background which she is cutting out now.  She has a good portion of it cut but since it's a clear, textured glass it's hard to see in the picture.  I  suspect that Cindy will be adding a border to this next week and then it will basically be complete.  Meanwhile she's also working on a Crab/Corn tray for herself since she loved how the last one turned out.  As you can see she already has the front and back finished so the hard part if this project is already behind her. 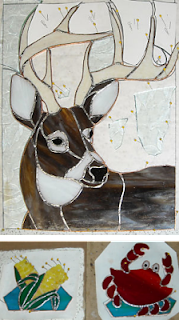 Ann worked on her Angel Hand Mirror which she has wrapped and ready for tacking (but I somehow didn't get a picture of it).  She also worked on her newest Fleur De Lis Window which I did managed to photograph.  She only has to cut 4 corners to cut before she tacks this together but  the glass she decided to use for the corners is at home so she just left the corners empty for now.  That didn't slow anything down for her during class so I'm sure that this will be another completed project next week. 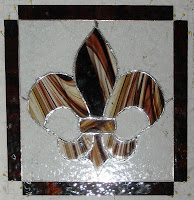 Helen came in with most of her Iris Window completed.  She had run out of glass and still needs to cut  three more of the 'ribbon-ish' sections of the inner border but one they're cut and fitted into place she'll be home free with her first window.  Once this is tacked together all she'll need to complete this are two borders and some solder!

Mary seems to be in love with clear, textured glass.  And that's fine because I love clear, textured glass as well,  but it really makes it hard for me to show you what she's accomplished because it doesn't show up in the photos!   That said, her window is 100% cut , ground and even wrapped.  She plans on tacking it it home and perhaps she'll even solder it there as well.  We'll know for sure when she returns next week. 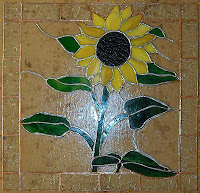 Myrt took a small break from her Balloon Window to make this Dove/Cross Suncatcher and start another Fleur De Lis Window as well.  Both of her new projects are all cut and ground which means that she's only got to wrap them before moving on to the next steps.  I'm pretty much expecting the cross to be finished  and the fleur de Lis to be ready for it's background which will involve a fancy border much like the one Brenda plans on using for her Cross window.

Wow, Tami really impressed me this week with the cutting on her first window.  When she completed her butterfly she told me that she would like to make the top of Mary Graces box as a stand alone window.  Honestly, I thought it was too simple for a stand alone project so I asked if I could 'flesh the idea out some' so to speak,  Tami agreed and this is what I came up with.  And since she already  has all but 5 pieces cut I'm glad I went with the more complex design.   So that was the long way of saying that Tami did GREAT working on her first 'real' project.  I could see her confidence grow with each cut she made and there's no doubt that she'll be grinding this next week.

Betty continued working on her 2 windows.  It's hard to see but she's got all of her background cut and ground in her Flower/Hummingbird window.   That means that the only thing left to do is cut out the border and she's ready to tackle that while she's at home during the week.  Meanwhile she's going to cover the brass channel she put on her Fleur De Lis Window with lead and then touch up some rough spots to finally (did I just say 'finally'?  She's only been working on it for a week!) call this window complete.

And ending on a sad note we take a look at the 3D star that Tim began at home.  He brought in the triangle bevel pieces all ready to be assembled and he also brought in a new LSU window that just needed some channel on it (that I never got a picture of).   What's so sad about that?  Well, it was Tim's last class with us.  I'll state for the record that he's officially graduated with honors and I'm pleased that Tim will be continuing to make stained glass at home.  Looking at the work he accomplished on his latest LSU window proved to me that he knows what he's doing.  He, Jane and Donna are going to missed on our Wednesday night classes. 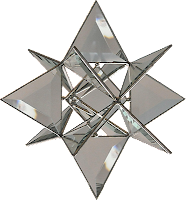 That about wraps it up this week--  See you all in again seven days!

Posted by Bayou Salé GlassWorks at 10:55 AM