Ironing Out The Details

Our tip this week is short and simple.  When cutting your glass you want to focus on three things:  1) An even pressure throughout the score, 2) A slow and steady pace, and 3) Following the line accurately.  People often tell me that they can't follow the line and when I watch them score the line I see that they're moving at 65 miles an hour.  Remember, slow and steady wins the race.  If you take an extra hour cutting out your pieces I can guarantee that you'll shave at least that much time off of your grinding time.

Okay, Brenda's latest Wood Duck looks anything but fowl.  She didn't cut her sky from one continuous piece of glass but she did line everything up in the order that the pieces appear in the sky.  This gives almost the exact same effect and looks far better than just placing pieces randomly and having nothing match. 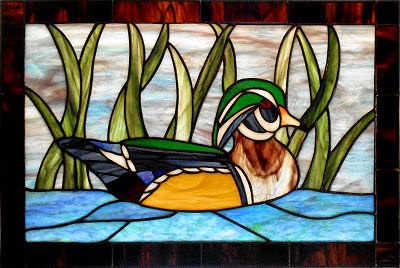 Rowena's Butterfly Lawn Ornament has been affixed to its stake and is now ready to be skewered into the ground somewhere in her garden.  The orange color scheme is classic and anyone who can't tell what this is needs a kick on the side of their head! 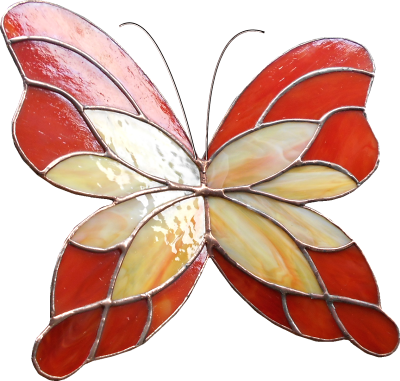 Paula sure surprised me and came in with this G Suncatcher completed and ready for hooks.  She drew it up herself and did it all with no help at all.  I looked over her soldering but it was essentially flawless with no need for me to touch anything up.  And her circle is perfectly round-- something that a lot of people overlook, but not Paula. 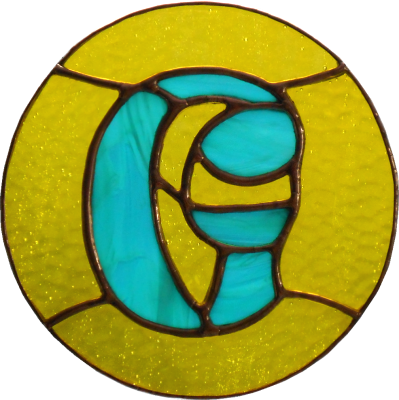 Linda L walked out the door with her three Kaleidoscopes ready to be gift wrapped.  There are some thick and long lead lines on the body of these Kaleidoscopes but Linda got a bead on them with nary a problem.  Her wheels are nice and round (on the kaleidoscopes!), spinning freely without resting at the same position due to any unevenness.  There are only 16 pieces of glass in each of these but this project requires precise fitting which Linda delivered on in spades. 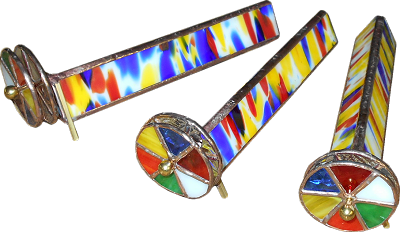 Here's a look through one of them: 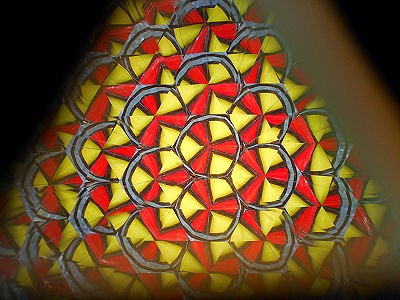 Carol's pair of Fleur De Lis Boxes worked out perfectly as well. When she came in she had the tops completed and the four panels that form the box sides already wrapped.  Once they were tacked together she cut the glass bottom and then soldered it to the sides to finish off the bottom box sections.  When they were washed, colored and waxed,  Carol learned just how easy it is to attach the Fleur De Lis lids and this is what she had. Wonderful gift boxes! 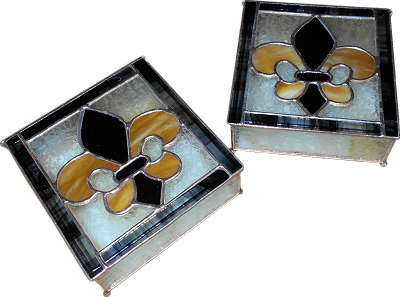 Becky S completed three more of her Double Bordered Frames and even resumed work on her Fleur De Lis Window as well (but I forgot to get a picture of that project).  Here are her finished frames complete with views of her yard throughout the seasons.  When Becky returns we'll check out her Fleur De Lis Window. 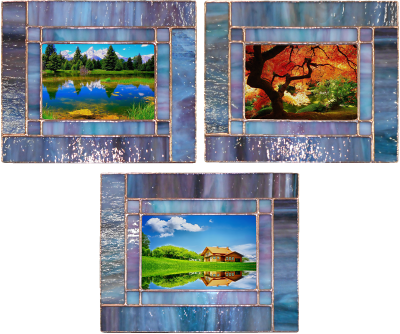 Brenda not only completed her Wood duck window-- she also finished this 'C' Window as well.  Brenda tells me that she'll be doing a 'D' Window next.   I'm guessing that an 'E', 'F', 'G' and 'H' will be under way soon enough. 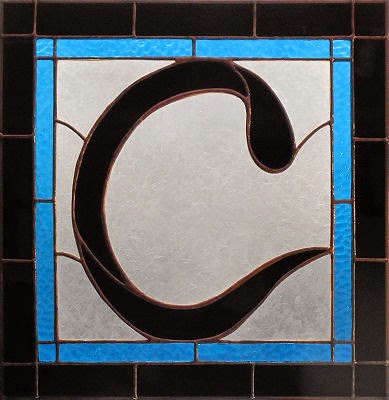 Terry's version of Santa Claus certainly is jolly and fitting for this time of the year.  Once she got the border tacked on she got the front side completely soldered leaving only the back side and the brass channel to surround the edges to go. 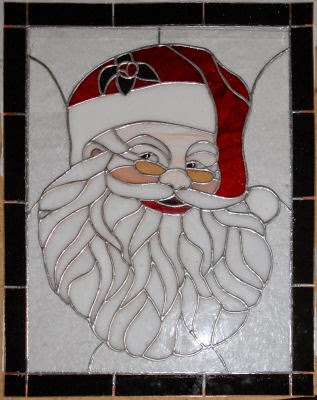 Mary Grace just needs to grind the glass she used for her sky and add an eye for her deer and then she can begin soldering this project.  The sky practically fits into place already so she won't be spending much time at the grinder, that's for sure.  We're just about a border away from calling this window complete! 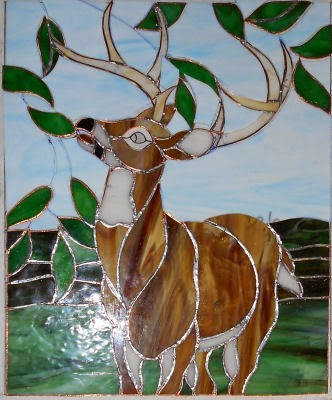 Betty's pair of Nativity Windows are very close to being finished now.  In fact, the one on the left just needs to be soldered.   The one on the right still needs its border wrapped and tacked as well as 2 corner pieces but that won't take Betty any time at all. 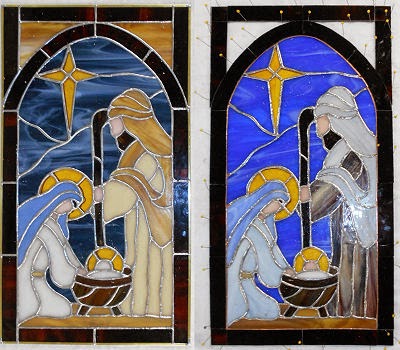 Cindy's Birds are just about finished-- she has this all tacked together after getting all of those little, tiny eyes cut and ground (that was fun!)  It's looking great and I can't wait to see what it looks like with some light behind it when Cindy returns with it.

Linda F has all of her glass cut and almost all of her Wise Men Window wrapped and ready to be tacked.  She'll need a border on this but that won't take any time at all.  I suspect this will be done just after the new year. 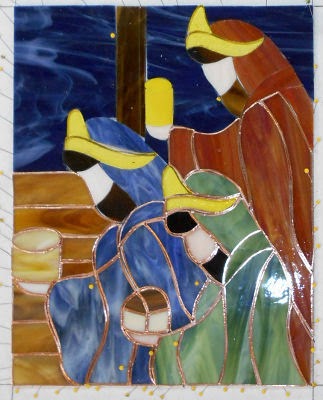 Well, it turns out that I misled all of you readers.  I forgot that Brenda has already begun working on this 'H' Window so I guess she's attacking the alphabet in a different sequence (so as not to be too predictable?)  As you can see, this window is all cut out already.  It looks like Brenda may be onward to the letter 'D' when she returns. 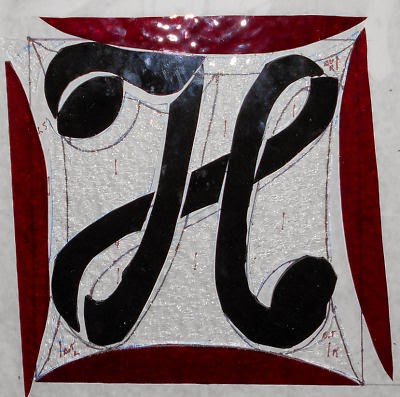 Talk about taking an initial window and livening it up!  Lynn has all of the glass cut and ground for her 'G' window and has taken it home to solder.  Once that's done she'll be able to add a zinc channel to the edges and then wash it and color it.  I suspect that will happen when she returns and that we'll get a final look at this with some light behind it before the end of the year. 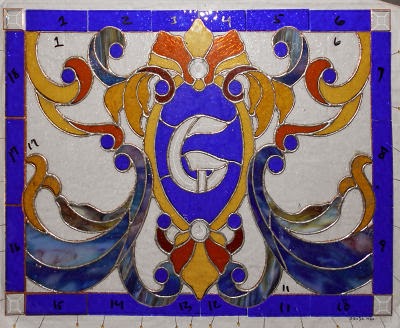 Martha resumed work on her Dragonfly and Irises Window and as you can see it's looking...wait a minute... there's nothing to see.  Martha certainly is a fox isn't she?  Well, rest assured that any day now we're going to blow the cover off of this story! 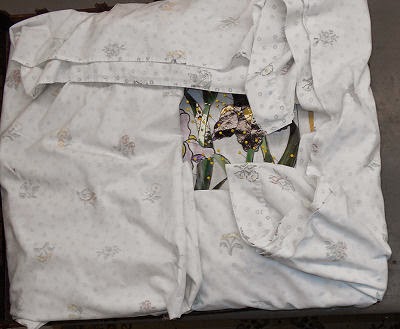 And Myrt has all of her Beveled Transom Window tacked together save for a small piece on the left hand side that was cut a little too short.  Once that's put in place she's going to be able to sit back and relax while soldering this bad boy!

Next we take a look at Susan's Traditional Window design.  All of the bevels have been tacked into place and all of the difficult long cuts have been made.  All she needs to do now is fill in the triangular pieces along the top and bottom to make a straight edge and then add the final beveled border.  There's not much to solder on this window but those long straight lead lines have been known to drive people a little crazy at times.  But I'm sure Susan will muscle right through them though. 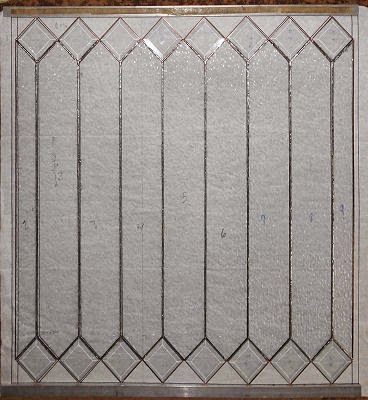 There's not much to say here.  Bonnie's Triple Tiered Sunflower Window is all tacked together and the front is completely soldered. With just the back side to go I'm sure that this will be another window that is completed during our next set of classes.

And Rowena is also working on a Sunflower pattern but hers will be a Lawn Ornament when it's completed.  With just one round, brown piece left to cut I'm sure that this will be another quickly made project for Rowena.  She can stake it in the ground next to her Butterfly when it's finished! 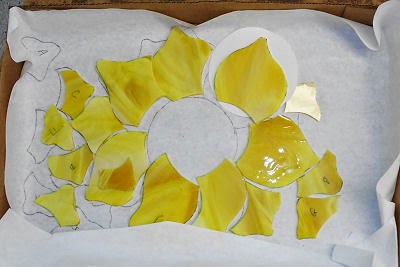 And that wraps things up this time around.  I'm very late with this post (by over a week) and I have another one to get out within the next two days so expect one more update before we ring in the year 2015.