It's All Fun And Games Until Somebody Loses An Eye

Grinding to a pattern always involves following the lines and although the pattern can be altered here and there without consequence, there are other times when it can't.   Sometimes there are hidden lines that need to be followed because although you can see a line, one exists in your mind and breaking it will cause the pattern to 'fall apart'.  The red arrows in the picture below point to blue lines that I've added to the picture to show you that the edges of the amber glass should form a circle.   If these amber pieces are off the cross will just look wrong because something doesn't quite line up in your minds eye.  Although it's not a line you can point at your mind can see it as plain as day. 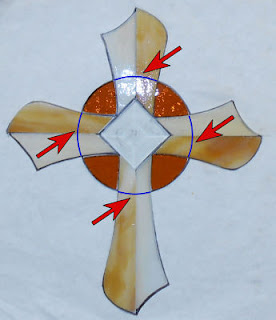 Here's a great example of the same effect done correctly and incorrectly.   Can you spot the difference between the two?  In the picture on the left the stem appears to connect even though there is another stem crossing its path.  On the right the stem doesn't line up and the flower no longer looks correct.  It's a subtle difference but it's the difference between good art and bad art.  Always be sure to pay attention to hidden lines by watching how pieces connect when they are crossed by others. 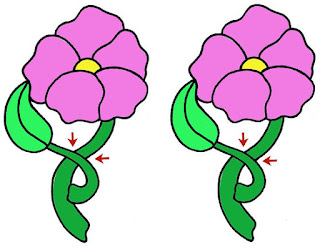 You know what? Linda L's Wine Bottle Window turned out even better than I'd expected, and let me tell you that I was expecting quite a lot.  Her soldering on this was nothing short of amazing and hopefully the two pictures show you how the bottles make this window 3D.  The round bottle bottoms on the right of the window have been cut so nothing pokes out on the back side of the window but the complete bottle on the left is centered within the window so that half of it is poking out of the front  and half of it is poking out of the back.  This was a lot of work but it's beautiful. 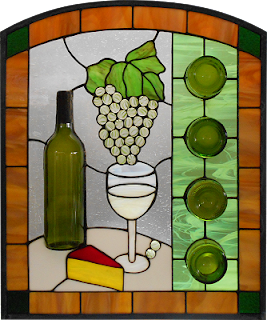 Ann's Acadian Flag Window is officially complete and it features some fancy wire work on the top of her castle towers.  The deepness of the red glass makes it hard to see in the picture but trust me when I tell you that it adds another dimension to this window.  And just look at those tiny pieces in the Fleur De Lis!  That's a lot of work! 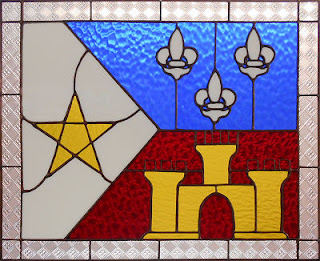 Terry has finished the top (and final) section of her spiraling window and she's thrilled to be moving on to a new project.  These big windows have a way of sucking the life out of you when the weeks turn into months, but in  the end it's always worth the effort as you can plainly see here. 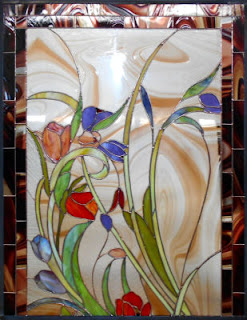 Lynn finished her Beveled Fleur De Lis Window an decided to leave the lead silver rather than coloring it with patina.  The choice is perfect when you consider the colors in the window and Lynn's work was top notch.  By the time she got to the second side her solder line were forming into nice smooth lines.  Practice makes perfect and I don't think it will take Lynn but one more project before she achieves perfection.  (I love putting the pressure on!) 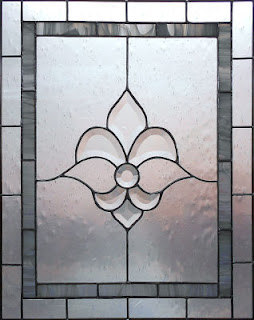 Jeannette completed her second Beveled Insert and this week we get to see what it looks like inside of its wooden frame.   Just imagine two of these side by side because that's what Jeannette has in her home now that this one is completed. 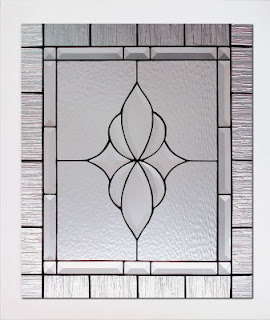 Cindy has even more Suncatchers completed this week including two etched glass pieces, a Christmas Candle, and her rendition of the Peacock and Flying Pig. 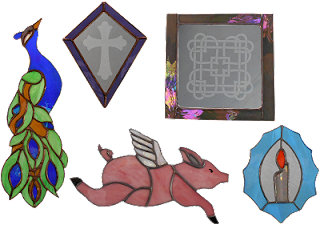 Ann started cutting out this Stylized Fleur De Lis Window after she finished soldering her Acadian Flag Window and she's already got a lot of it cut out. I love her colors and even though she didn't plan on making (needing) this I think she's going to be very pleased with the final piece. 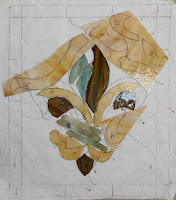 Barbara has begun working on a Crab Window of her own and will learn how to cut a background from the completed subject very soon.  She's got all of the crab itself cut out as well as the leaves that work as accent pieces throughout the window.  Now she's grinding everything and once it is ground she'll tack it together, place it on top of her background glass and cut everything perfectly. 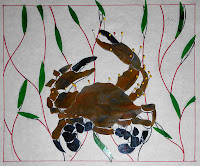 Becky S's version of the Eagle/Flag Window is all cut and ground.  She's using a glass eye rather than a dot of black paint and now Becky knows that the small 1/4 inch grinding head can also be used to drill  hole into a piece of glass.  Only the small round black pupil will be wrapped but the lead that surrounds that foil will easily hold the piece into position.  It's a little more work but the window will never need it's eyes dotted again. 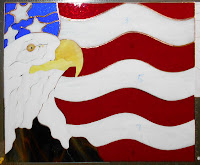 Carol's back!  It was great to see Carol again-- she's certainly been missed.  Although she didn't bring her oval Iris Window she did return with a Fleur De Lis Window that is completely cut out save for the final border.  She does know what glass she'll be using on that final border and we'll see that along with her Iris Window when she returns next week. 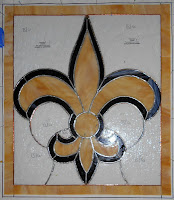 Myrt has moved along to a widescreen version of a Mermaid Window which is already proving to be popular this week.  We almost had two other people start the pattern that this was based on. This pattern was actually derived from a naked woman pattern and we'll show you side by sides comparisons of them next week.

Mary Grace has all of the scenic section of her WELCOME window cut out and has begun grinding it to fit together.  We've gone over the 10 steps of grinding and Mary Grace now understands why grinding as you go can make things more difficult rather than easier.  Still, this window is  already looking great.  And Mary Grace's sky has been cut from one piece of glass and that alone will make this look better than the average stained glass windows that you see in stores nowadays. 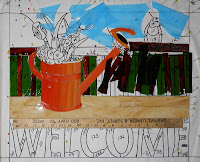 Linda is grinding what I thought was a geometric design but upon closer inspection it turns out that it's flowers.  Calla Lilies to be exact! Sometimes I associate things with patterns from the past and see what I want to see rather than seeing what is plainly in front of me.  The grinding is moving along wonderfully and soon the flowers in this window will be readily apparent. 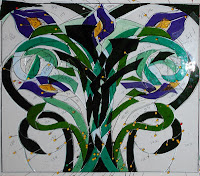 Susan R already has most of the work completed on her Pineapple Welcome Window.   In fact it looks like she's just about ready to cut out the two background pieces for the actual pineapple section already.  She's got colored bevels in her corners and I'm sure we'll see a border attached to this when we see it again. 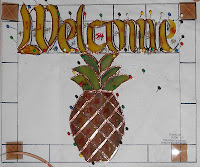 Jan has all of her Large Basketball Window cut, ground and tacked together.  In fact, she even has the zinc channel cut to size and ready to be attached but that's something that we'll handle when she comes back in next week.  Look for some big time soldering to have happened on this when you next see it.

Rowena's got all of her Long Tall Iris Window cut out and now you can clearly see why this has always been a favorite window of mine.  Rowena's colors really shine on this window which you will clearly see when it's lit up.

Meanwhile, Lara is working on her own rendition version of the Mermaid window that was inspired somewhat indirectly by Shelley.   Lara got her pattern picked and already has her Mermaid hair cut out which is VERY nice progress for a first days work.  I love how the various shadings from the same sheet of glass make the hair look lifelike rather than flat. 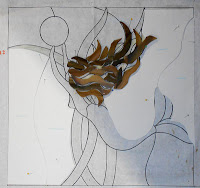 Roxanne's American Flag/Eagle Window is coming together at an astounding pace.  You can tell Roxanne has paid attention in her weekend workshops with us because she's moving along quickly and confidently.  With her glass all cut out she's begun grinding already! 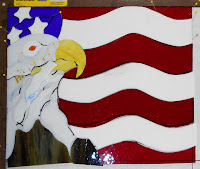 Sheri started work on this dragonfly window which although is on one pattern now, she'll make in two separate sections and then merge together.  By cutting and grinding the background as if the dragonfly weren't going to go in the middle of it everything will line up perfectly.  Once the dragonfly is completed it will be tacked together and the traced out on top of the fitted background pieces. This ensures that nothing will become distorted and the final piece will look as good as possible. 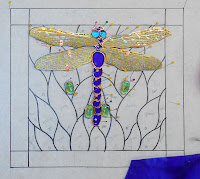 Cindy also found time to begin work on this Christmas Bulbs Suncatcher.  It's certainly colorful and is made from all of the tiny pieces that Cindy loves to work with. 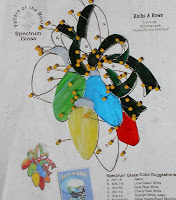 Shelley had no clue what she wanted to make when she came in but after sorting through patterns she decided to make this straight line String of Birds.  The beauty of this is that you can use a lot of small scrap pieces to make the birds and that's just what Shelley is doing as she works from right to left on this pattern.  She's got one down and just nine more (okay, eight and a half) left to go!

Betty continued working on her four snowmen and has them pretty much together now.  At this point all they need is a corncob pipe and a button nose with two eyes made out of coal.  Next week she'll finish these up and move on to spring projects. 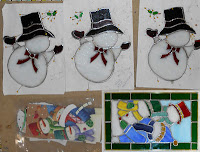 And lastly we have Brenda who is working on a beveled Transom window (and it's a biggie).  At only 12 inches tall by 67 inches wide we've decided that the best plan of action for this window is to split it into three sections to make transportation easier and to avoid any breakage that such a long, thin window is so susceptible to .

And that marks the end of classes for the week of July 17th.