Don't Try This At Home

No tips this week because I'm running late.  It's been a Hell of an evening and I'm just not prepared to come up with something on such late notice.  I promise a tip next week though.

Brenda's pulled out all of the stops in her Mardi Gras Mask Window.  From the extra feathers to the triple border this window looks great.  The interesting thing is that her next Mardi Gras Mask Window makes this one look like child's play!  I can't wait to show you how that one looks with glass cut on the pattern. Until then, look at this beautiful Window that she made this week. 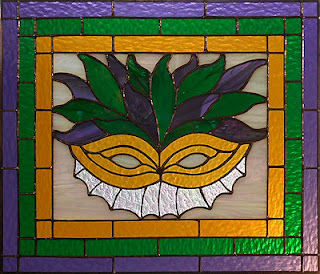 Bonnie finished her Cardinal Suncatcher and discovered why the tail that she had cut for it  had a large hole in it.   We had altered the placement of the tail so that we wouldn't have to add a tree branch to keep the weight of the tail from pulling itself off of the back of the bird  but we never marked the change on the pattern.  A week later we forgot about the re-design until Bonnie pointed out that she had to add a piece to the tail to get it to line up to the pattern.  That's when the light clicked on in my head and I remembered what we had done.  As you can see it all fits together nicely and the new placement of the tail makes it VERY secure. 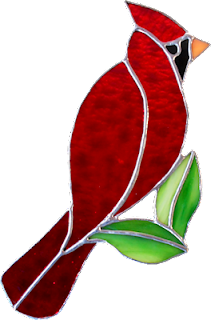 Carol finished the last of her Beveled Star Windows and again did a beautiful job on trimming the bevel in a colored glass.  This 'trim and matching border' is the same effect that Mary will be doing on her window that we'll see down a little further on in this post. 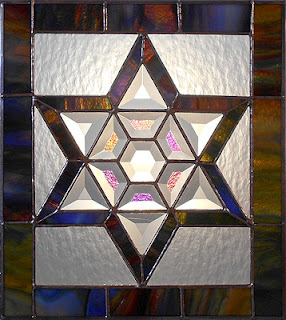 Jeannette finished her Address Window and then had to decide whether she wanted to leave the lead silver or color it copper.  After careful consideration she opted for the copper color and her window looks spectacular.   Another great job by Jeannette all around. 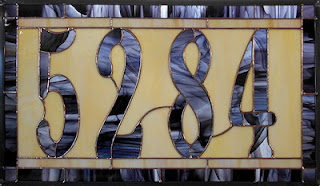 Linda F completed her Mardi Gras Mask which was the inspiration for many others that we feature throughout this post.   You know what they say, Imitation is the sincerest form of flattery.Linda complains that her cutting isn't great but her end results never fail to impress. 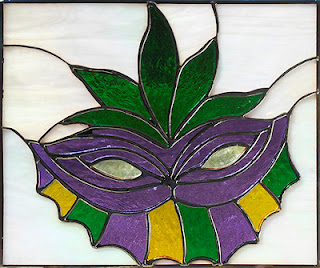 Jeannette also made these two Easter Rabbit  Lawn Ornaments.  She has a third one under construction and we'll see what that looks like when she returns next week.  All I know is that these two certainly look good to me. 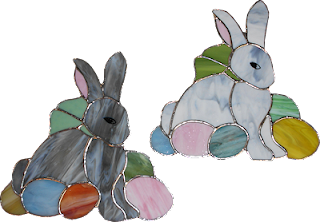 Becky started working on her Cheetah Window that always had people scratching their heads when they saw that pattern hanging sideways on the wall.   Now that the Cheetah is all cut out  I doubt that anyone will have any problem recognizing what the subject matter is.  I also have to say that her color  choices are purfect!  Just wait until you see what happens to this glass when we give it a spotted effect. 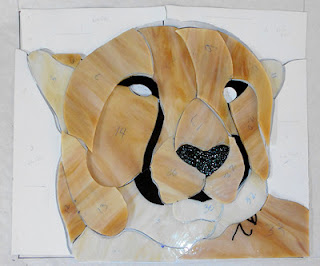 Judy came in and showed us the progress that she's made with her Seafood De Lis Window while she was at home and it's truly a work of art.  She's finished cutting the main section of the window and has  begun wrapping her pieces.   In my opinion the hard work is all behind her now.  There are abut 50 tiny pieces in this window but Judy has them fitting together perfectly.   She's still deciding whether she should use a color to trim the FDL or use a lead border-- either way will look great so in the end it just comes down to personal preference. 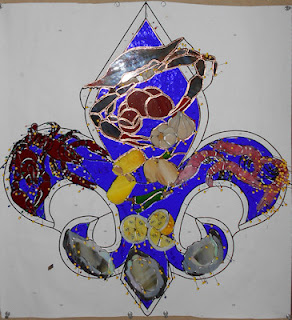 Terry pretty much wrapped up the work on her newest Butterfly Window.   Not only has it been cut and ground inside of one week, its also got the front side soldered!  That fast work and Terry is the queen of quick and efficient windows. 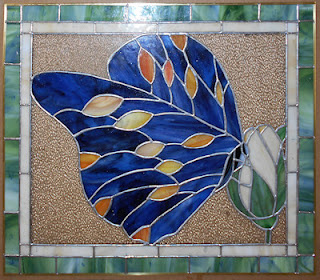 Tracey was looking through some of the work that our other students have done over the years and decided that this Mardi Gras Jester would be something that she'd like to make.   She's had no problem cutting out the glass so far and I honestly don't expect that to change.   At the rate she's going she'll finish cutting this out when she returns.  That means that she'll be on the grinder shortly. 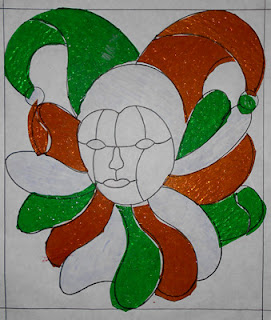 Tasha  started work on a pair of Mardi Gras masks of her own.  The cuts in these two masks are very complex  due to the depth of them which will have to be ground out rather than cut out.   Since she has all of the mask pieces cut she will start grinding them so the long thin points don't accidentally break off. 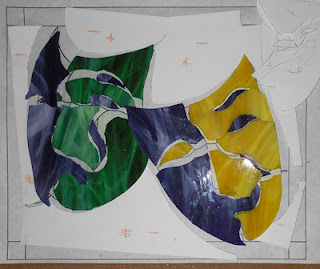 As you may can see, Mary has decided to make a beveled Fleur De Lis for her first project.  She's doing the same design that Barbara  is making with one small exception-- she's surrounding the bevel with a thin trim of color which will match the thin inner border as well.    We'll see what the bevel looks like completely trimmed in the blue glass that she picked when Mary resumes work on this window in her next class. 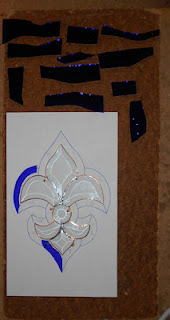 Sheri has most of her Secret Window cut out now as well as having the majority of it ground and fitting together. Giving the pieces some wiggle room is ever so important here because the foil will add more width to each piece. If there isn't room for foil then the pieces start expanding which then stretches the window until it becomes distorted (not unlike this picture!) On a flower window where petals are positioned somewhat randomly this is not a problem but on geometric windows and anything with a face it can be a window breaker. 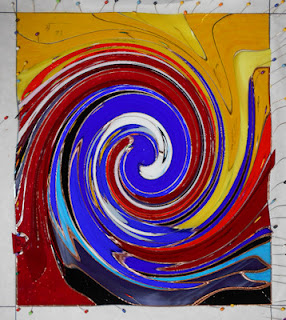 Susan D  has her Santa completely ground now,  She wants to re-cut the belt but I don't see where there's a problem.   I'd just wrap that piece in 3/16ths foil (which is smaller than the foil she's using on the rest of this project) and use it as it is.  I have no doubt that this Santa will look great no matter what her choice may be. 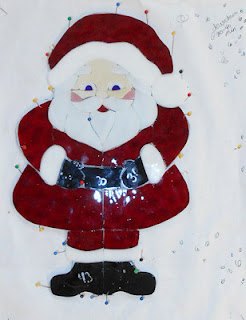 Mary Grace got all of her flower window wrapped and tacked and then she was able to fill in the two bottom missing pieces of her background (which she didn't have pattern pieces for).  Once they were tacked into position she added a thin inner border of purple glass and then finished it all off with a thicker border cut from the same glass as her background.  This is now ready for solder and according to her text to me the other day she's completed this piece.   Hopefully I can get a picture of it next week. 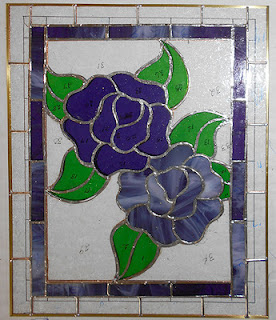 With her background all sketched out Myrt has placed her Cardinals and added some branches and five leaves into the mix.  She'll have them all cut out before you know it.  Interestingly enough, this window is being made for our newest student Tracey! 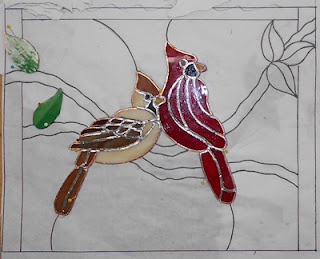 Roxane got all of the glass cut out for her own Pair of Cardinals Window and will start grinding it when she comes back in.  Roxane is a slow but steady cutter and because she's taken her time her pieces fit together really well.  That means she'll be spending the minimum amount of time at the grinder grinding these to get a perfect fit. 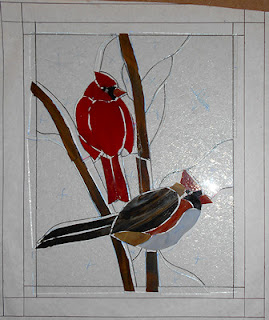 Martha has all of her clear textured glasses in a row and made this elegant Cross Window.  She just needs to attach the final border and then solder it before we can get this ready for its close-up Mr. Demille. 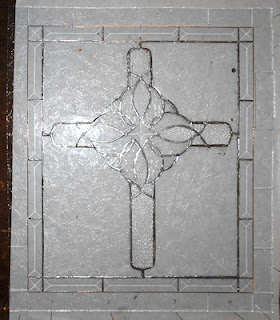 Linda L cut the eight rounded border pieces for her Santa Mickey Mouse Window using only one pattern piece.   When she came to a section where Mickey cut into the border she placed the border under the window and then traced around the overlapping section and then cut the border accordingly.  She's got a perfect fit and the front side is completely soldered already.  When she comes back in we'll add a channel and then this window will be completed. 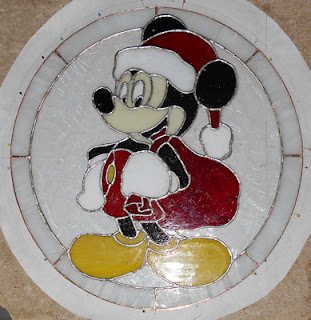 Susan R started working on a Mardi Gras mask window of her own and she's steadily moving along on it.  With Spectrum Glass having closed its doors our standard Mardi Glass colors are no longer available.  Some of our students have worried about this but we've already found substitutes for Mardi Gras and LSU colors made by other suppliers.   As you can see, Susan's colors are already looking beautiful in this. 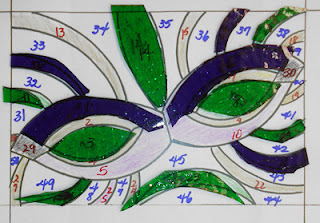 Linda F not only completed her Mardi Gras Mask but she also began working on this Wise Men Window.  She got a lot of it cut out while she was at home (all of it in fact) and began grinding it in class.   This is another project that she'll make quick work of. 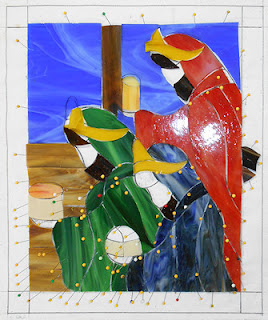 Ann now has her large Cross Window completely soldered and the zinc channel is firmly attached.   She'll be touching up any run-throughs that occurred on the front side when we flip it over and I think it's safe to assume that this will be completed when Ann returns. 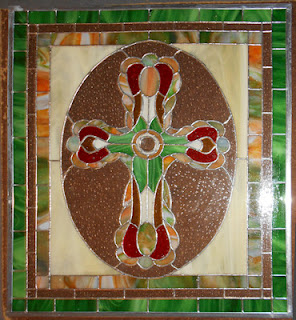 Jeanne has all three of her beveled Crosses tacked together and she'll be finishing these up when she returns next week.  These are always exquisite pieces and these three suncatchers are no exception.   People tend to underestimate the complexity of this project because they assume that the bevels are all the same and will just drop into place.  Sadly this is not the case and each bevel needs its surrounding glass fitted individually. 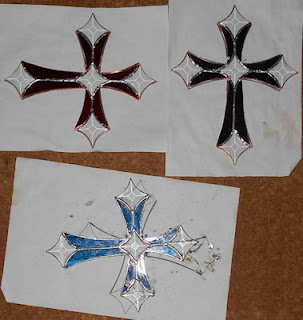 Cindy has made major headway through her Birds On A Wire hanging piece.  It's too big to be called a suncatcher and it has more pieces in it than you can shake a stick at.   She's managed to use most of her scrap glass with this project and it looks GREAT!

I must say that Betty's work on her Industrial Fleur De Lis has changed the way that she works on windows.  One thing that she's completely embraced is a  controlled use of flux .   Just a little goes a long way and stops problems from occurring later on dead in their tracks.   If you see trails of flux on your window you plainly are using too much.  As Betty texturized her foiled pieces with a lead coating I had to look twice to make sure that she had any flux on them at all.  She most certainly did and her soldering is looking better than ever.   Just a little is enough. 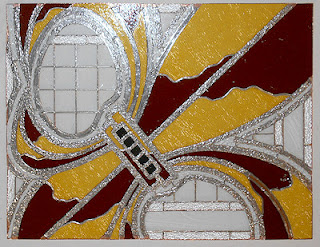 Barbara was busy working on the double borders for her Beveled Fleur De Lis Window and by the time she left class she had her window completely tacked together.   She's done great work on this and she'll be finishing it before you know it. 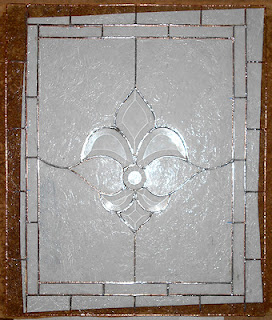 Brenda's next window will be these ornate Mardi Gras Masks and these are going to be stunning.   In fact, I may have to make one of these myself! 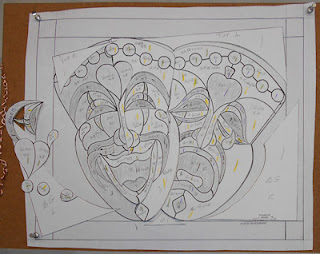 Lastly, it seems that Lara was my escapee this week.  She's run through many, many parishes at the bottom of the state and by that I mean that she has a good portion of her pieces ground already.  Sadly I have no picture to back up this claim.  The fact that I carried it out to her car really makes feel stupid for forgetting to take its picture but just wait until you see how much she'll have accomplished when you see her window next week!

Well we have another post coming up before the weekend about out last Stained Glass Workshop.  Keeps your eyes peeled about all the details on that when we return.