Saying So Much With So Little


What is one of the most important areas of your window?  It's the lines that square off your window before the border is attached (outlined in red below).   If these lines have pieces of glass that are poking out beyond the pattern then your border will be crooked and create  a very obvious flaw.   It's actually amazing how much this line matters so be sure to pay strict attention to it, especially if your window has to fit into an opening or be a certain size.   Patterns aren't drawn to give you a rough idea of where the glass should go-- they are drawn to be followed precisely.   This also includes making sure that your corners line up which we will discuss next week. 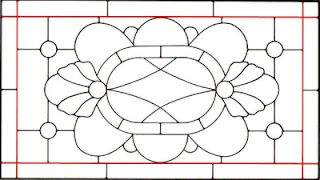 So Mary has completed her first window with us and it's a winner!   She did excellent work throughout the process of making this and even in her first window I saw real growth in her abilities.   She's got her next window all picked out and if it turns out even half as good as this one did then she'll be doing great! 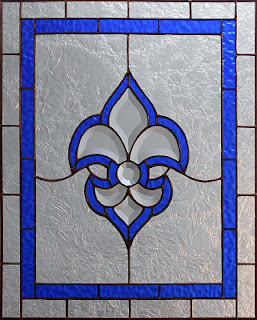 Cindy finished her large Peacock Suncatcher just as I suspected she would.  She made quick work of it especially considering that she didn't do anything on this at home.  I have two of these cut out myself and seeing this completed has got me itching to finish mine (right after I get a few orders out of the way).

Mary Grace finished her Medium Sized Beveled Panel and should pat herself on the back for plowing through this window so quickly and efficiently.  I think she's really getting the hang of this! 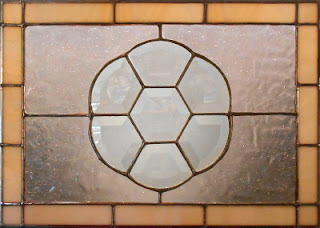 Rowena completed two projects this week, the first being this  LSU Window.   This is a window that she's done many times before and has down to a science at this point in time.  Although it's hard to see in the picture, I love the rough, irregular glass she used for her background.

Betty completed her Christmas Bells Window and even cut and attached her own brass channel!  Although she feels she has limited strength in her hands she has learned that it doesn't actually take a lot of strength to cut channel-- just firm pressure with a gentle rocking motion.  Attaching the channel went very easily and as you can see the finished window is gorgeous.   The berries took about 10 minutes to incorporate and really add to the overall look of one of my favorite Christmas Windows. 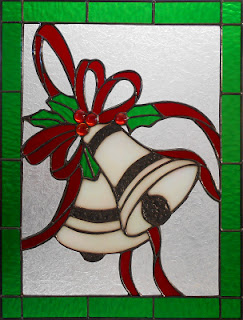 Rowena also came with with a Flower Hand Mirror already tacked together just needing a piece of mirror for its center.  Once that was cut she quickly finished this piece. We haven't seen one of these in a while now so it's nice to see it again. 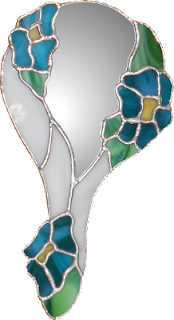 And wrapping up out completed projects we have two more Crosses that were made by Terry.   She knocks these out faster than you can say, "Abracadabra!" 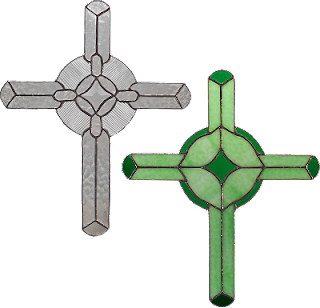 Susan D resumed her grinding and has perfect fits on all of the pieces she's ground so far.  And I don't expect that to change as she works her way downward on this window.  I can already see that this Fireman's face is looking perfect.

Carol got her final border and a zinc channel attached to her Long Tall Waterlilies Window.  I must say that the secondary green that she picked for her final border works wonderfully with the rest of her colors.   Since she has the front side soldered and she's taken this home with her I'm going to go out on a limb and predict that we see this completed when she comes back into class next week.

Linda F has been missing for the past few weeks but as you can see she has not stopped working on her stained glass.   All of her Dragonflies and Waterlily's Window has been cut out and she is now grinding all of those pieces.   She got a lot accomplished in just one class and I have no doubt that this window is going to be one of the brightest feathers in her cap. 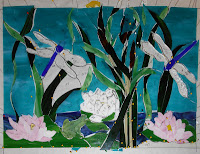 Susan R is putting the finishing touches on her Easter Rabbit Window now.   There are only eight pieces of border glass to wrap before she can start soldering this project.   Rabbits are the in thing now and I'm happy to see everyone finishing them in tome for the holiday. 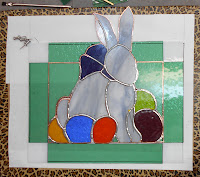 Shelley got this John Deere Tractor window started while she was at home and then stopped working on it.  This week she brought it into class so she could get it up off of her work table and hanging in a window.   She got all of it ground and almost all of it wrapped while she was in class so I'd say it's safe to say that this window will be out of her way soon.   I love the pattern that Chad drew up for her.

Jeannette  cut out all of the background glass for her double Humming Bird Window and then got it ground, wrapped and tacked together.  Once that was done she was able to get a border cut for it.  She's skimmed her pieces and took them along home with her to wrap so she can get this window fully tacked together when she comes back in.   That will give Jeannette almost a full class to start soldering this. 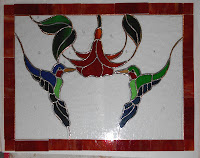 This week we saw Jeanne begin working on grinding the first of her pair of Butterfly Lawn Ornaments.  She's just got 6 pieces to go and this one will be ready to be wrapped and soldered. 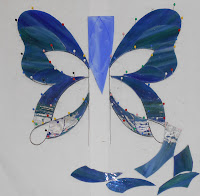 Lara now has all of the glass cut for her Louisiana Parishes Window.  She got the clear sections of her background attached pretty quickly and then got her inner border cut and attached.   The green she picked out was striking enough to not blend in with all of the colors in the center of the window, but not too brilliant as to take your eyes off of the focal point.   She's taken her final border wit her so she can get them wrapped at home so this is another window that will be soldered next week.   There no chance a window of this size can be soldered in just one class but possibly in the following week, well, who knows! 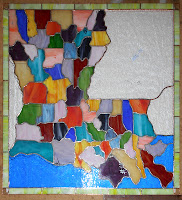 Linda L is another student who went full steam ahead on a project this week and knocked it out of the ballpark.  Linda decided to work on this breast cancer window and came into class with just the pattern sitting in front of her.   By the time class was over with Linda had the top all cut ground and tacked!   Next she got her border cut as well, which she's going to try to wrap while at home this week.  She really is making this  a quick little diversion.

Jan got her Baseball Field Window's border tacked on to the window and then we put a zinc channel around that to add stability to this large piece.  The size of the channel is always dependent on the size of the window.   Larger windows need more support than brass channel can provide  around their outer edge.  Once you start hitting the four square feet mark it's time to stat thinking about using zinc channel and that's just what Jan did.  She's got the front side soldered and may very well wrap this up next week.

I do believe that Ann has just about all of the pieces cut out that she needs to begin grinding her large Fleur De Lis Window.  Once the four corners and the center FDL are ground she'll wrap them, tack them and then use them as pattern pieces to cut her background from.   Grid work backgrounds always go together easier this way. 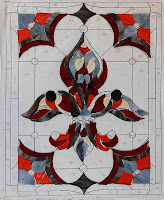 Barbara cut out even more of her Autumn Scene Train Window and is thinking that she may move over to the grinder next week to help break up the monotony off all the cutting and color selecting that she's been doing.  Sometimes you need a little break and in this case she'll get a much better feel for how this will look once some of the pieces start fitting together.

Mothra started working on another Fleur De Lis Window but unlike her last one, this doesn't have any bevels in it.   She's replaced the pre-cut bevels with pieces that involve tight curves with many cuts.   Your average FDL is made up of seven pieces but this one has 17!  And I do believe that she'll be making three of these! 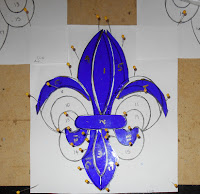 These are two Suncatcher Angels that Mary Grace has been working on.   With just their Halo's left to go I'm thinking that these will be finished and we'll see Mary Grace start a new project when she returns to class.

Becky S has begun making a new double Sunflower Window.   This isn't the same pattern as the one that our Tuesday morning ladies make, however.   This is based on a Spectrum Glass Pattern of a single Sunflower that Becky doubled and then assembled as a single window a few years back.  Wait until you see the colors in this one-- Becky always does a bang up job on her color selections. 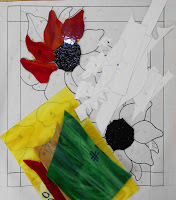 Terry also worked on two more of her large Cross Suncatcher and is utilizing the grain of the glass in the green one to give it some added depth.   Sometimes a simple angular approach can really spice things up as Terry is seeing here.   We'll discuss this in more depth once we see this completed.

And Brenda is also making a large Cross Suncatcher and she's just about ready to get it wrapped and soldered. 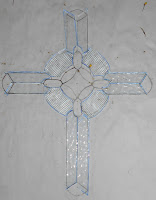 This week we have no missing pictures but not because I forgot to take them.  Myrt finished her Pair of Cardinal Windows but she planned on washing them and coloring them at home.  It's actually going to live with another student of ours so hopefully someone will be able to get me a finished picture of this window.

And lastly, Bonnie got all of subject matter ground on her Mystery Window this week and then began wrapping it.   When I turned back around she not only had it wrapped but she had it tacked together as well.   Then as she departed I saw she had the background glass cut as well!  That's what I call progress with a capital P.  It's too bad I can't show you what she's accomplished though because this window is a secret.