I know I promised to explain how Mary Grace had cut the Basket to her Easter Egg Suncatcher so  easily but with our weekend workshop I just didn't have the time to make up the images for it.   I promise that we'll discuss that when we return but for now I'm going to go over some advice that most people don't realize.  It's the order that your cuts should be done in and it never changes.


First you cut your inside curves.   These are ALWAYS cut first.  Always.  Without fail.

Next you cut you longest cuts.   These are always done after inside curves are cut.

Lastly you make your shortest cuts.

By working in this order you'll find yourself breaking glass far less often.  It's a fact. (Remember to cut point to point to get that inside curve out first!)


Okay then, let's get down to business here.   Carol completed her Water Lilies Window and is it ever a winner!  Her colors are a huge part of what make this window look so good but that doesn't mean that the work she did is any less a part of this windows good looks.   Now that this is completed I suspect others will want to make it so I will warn you all this it is a large window reaching 36 inches in height.

Bonnie completed her mystery project and since it's been posted on Facebook and it's already been gifted it is obviously now safe to reveal.  This window was no problem at all for Bonnie and the only question she had involved with the black slits for the eyes (which we painted on).   A great job all around. 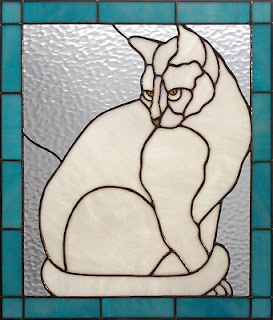 Terry completed this wonderful Magnolia Window and did it in record time to boot.  Last week this window didn't even exist in pattern form but Terry knew exactly what she wanted, drew it up and then made it within seven days.  But that wasn't all she did... 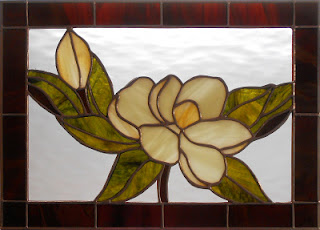 We saw Terry begin this project last week and here we are just one week later looking at the finished project.   I have to give Terry two thumbs up for both the design and the colors on this project-- I think it's perfect! 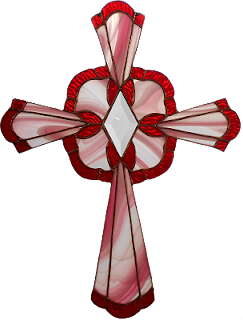 Tasha completed her Sailboat Window and did a nice job on it.   She even went as far as soldering the brass channel to complete this flowing peaceful scene.  Well done! 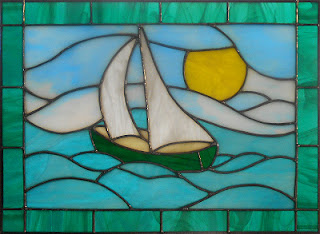 Susan R completed her JOY Suncatcher and the extra berries in the 'Y' on the right did the job of stabilizing the leaves and preventing them from bending off.   Sometimes you will find stained glass patterns that double as patterns for needlepoint and other crafts.  Most times these patterns need 'tweaking' to actually work as a stained glass pattern as this one did. 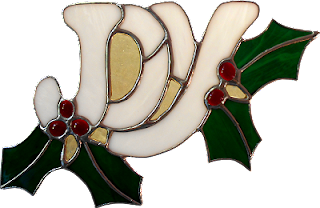 Jeannette completed this Hand mirror that she designed herself.   It was all based around the bevel that rests in the bottom of the handle and it just sprang upward and outward from there.   Jeannette's also widened the mirror so it reveals more of the users face.  You'll soon see that someone else has the same idea this week. 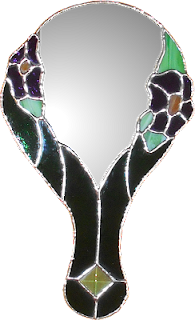 And if making a Cross and a Magnolia Window weren't enough, Terry also completed her First National Bank Logo window as well.  These (logo's) are always fun to do and this one turned out beautiful.  In fact, if you didn't know that it represented a bank you might very well hang it up in your own house just for decoration. 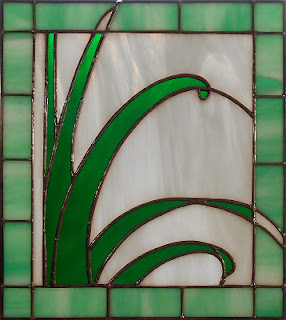 Cindy completed her first two (of many) flower hand mirrors.  She also designed a mirror of her own which has more mirror area making it more practical than decorative.  I'm sure well see one of those completed soon. 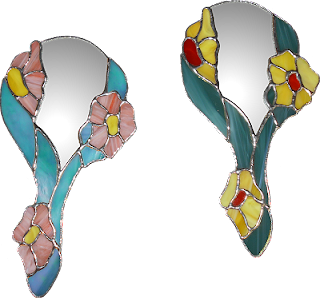 After Bonnie wrapped up the work on her cat window she started immediately on this colorful fish.   She has it almost completely cut out and will be grinding on it before you know it. 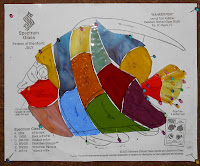 Shelley made incredible progress on her Sunburst Window.  How incredible you ask?  Well she traced out her pattern, cut out the paper pieces and then got all of the glass cut out for this window in just one class.   And it doesn't look like Shelley will need to spend much time grinding because she cut her pieces on the inside of the line.  This is going to be a beautiful window for sure. 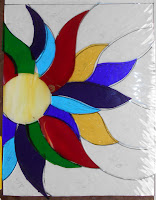 Tracey started her newest project and it's going to be a Street Address Window.  She's going to make the center rectangle with the numbers 7256 in it and actually tack that together before she grinds anything else on this project-- this will help ensure that all of those horizontal lines remain straight.   Although there are a lot of pieces in this window she only had to cut pattern pieces for one half of it since the pieces on the left side are identical to the pieces on the right side (just flipped upside down).

Becky S has all of her sunflowers wrapped and waiting to be tacked but before she pulled out her soldering iron she decided to start working on the clear background pieces.  She picked out her glass and had the pattern pieces traced on to the clear glass so Becky will be at the grinder again next week. 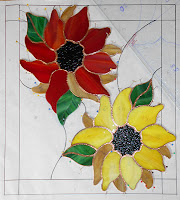 Susan D is now a good third of the way through the grinding portion of her Fireman Window.   The redesigned helmet gets two thumbs up from me and Susan is showing great pattern awareness with her ability to make such a large change from the original design.   Drawing stained glass patterns is all about knowing how to hide necessary lead lines that make the window possible.  I started drawing my first patterns by altering existing patterns just as Susan has done here. 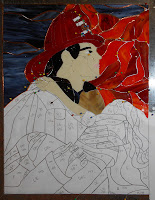 Next up we have the Easter Basket that Mary Grace started working on last week.  This week we see that she has it all cut out and ground which means that she should be finishing this up when she returns to class just in time for Easter.   Next week I promise to show you how the basket itself was cut out so quickly and efficiently. 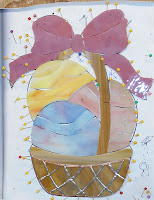 Linda L continued grinding on her Welcome windows and she's very close to having the first one completed.   There are always more pieces than you'd think when letters are involved in a window but Linda is working her way through them at a nice steady pace.  If you're going to do something you should always take the time to do it right. 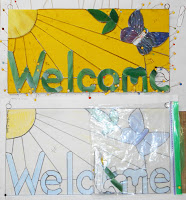 Jeanne now has her two butterfly lawn ornaments all ground and she'll be moving on to the wrapping phase of the project next.  She's taken pieces home with her so there's a chance we'll see these get some solder on them when Jeanne returns. 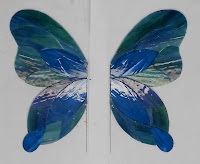 Jeannette is so close to finishing this Humming Birds and Fuschia Window that I have the hooks completed for it already.  There is little doubt that we'll be seeing this completed when she comes back in. 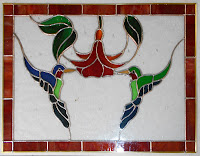 Linda F kept grinding away at her Dragon Flies and Water Lilies Window.   She's already got so very much of this complete with only really the center section left to go and she may very well get that ground by the end of her next class.   It's a beautiful window and her colors are just outside of the norm to really make this a stand out project.  Art should never imitate life as life is rarely so fun to look at

After spreading JOY through the world, Susan R began cutting out this Lady Bug Suncatcher.  The tight curves in the wings are always a paint to do as most of them have to be ground out but Susan's reduced the grinding by whittling away at some of the red glass.   This has always been a nice pattern and it's good to see it being made again.

Martha now has all of the glass for her three Fleur De Lis' cut out and is working on grinding them to fit together.  Once these are tacked together she'll trace around them on top of a piece of background glass and get the three backgrounds done all in one night.  Yes, it will be that simple. 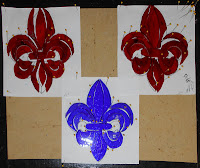 Barbara spent her night in front of the grinder and was another student who went above and beyond by accomplishing far more that I ever thought she would in just one night.   With almost all of her pieces ground (that she has already cut) she'll finish cutting the remainder of her glass soon.   And if you enlarge this picture you can actually see the train penciled in along the top!

Mary made great strides on her ULM Warhawk Window by getting almost all of the glass cut out for it.  I believe there are only a few pieces of clear glass to go before she begins grinding all of her pieces.  I can guarantee that will happen when Mary returns.

Myrt's latest project is moving along so quickly it's almost a blur.  Oh wait, it's a large Cross Suncatcher!   Myrt thinks she moves slowly but I say that she moves precisely-- and that's a good thing because I always believe in quality over quantity. 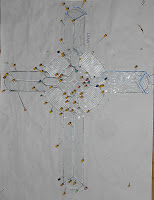 Ann has moved on to the grinding phase of her large Fleur De Lis Window.   She has her four corners fitting together perfectly and when she returns we'll get to see the actual Fleur De Lis start to take shape.   This is a window that really affects me. 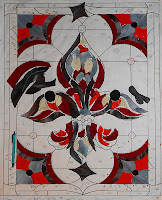 Roxane got all of her two Cardinal Windows completed but after she left I realized that we need to cut through a few of her pieces to make thin tree branches in lead.  It's a simple fix that won't take more than five minutes so we'll see this get a border on it and some solder when Roxane returns next week.   She also attended our Weekend Workshop and has a familiar yet beautiful window to show you from that class as well. 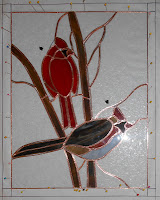 Ok, I'm going to say her name one last time this week:  Terry also worked on this Cancer Ribbon Cross Suncatcher and as you might suspect, its already been cut, ground, wrapped and tacked! 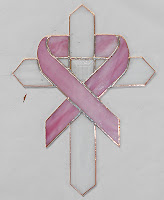 So, technically Lara has completed her Louisiana Parishes Window, but she hasn't been able to wash and color it yet.   She finished soldering this with plenty of time but a window this size needs to be washed outside with a hose and it was already dark outside.   Look to see this hanging up when we return next week.  All I can say is that this really looks great. 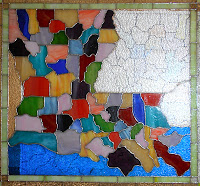 Rowena started working on a pair of Cross Suncatchers which include one made out of bevels that she's begun to trim in a teal glass.  cutting the angles can be a bit tricky and I even screwed on up while trying to show her how it's done.  Nonetheless I think Rowena will make quick work of these.

Brenda completed the Cross that she was working on last week and already gifted it so take my word for it when I tell you that it was a most lovely cross indeed.   This week she worked on yet another one but by the time I got to take a picture of it Brenda already had it under wraps. 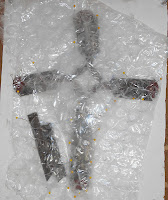 And that's what happened this week in classes.  We have another Weekend Workshop to publish and I'll get to that very shortly because I don't like them hanging over my head for long.  Expect another update shortly!

Posted by Bayou Salé GlassWorks at 12:02 AM