We're Off To See The Wizard

Slow Down.  That's the best advice I can give to any of our students and reader out there.  This past week I watched numerous students cutting glass and saw the majority of them race through their cuts as if the line was a suggestion rather than rule.   If you take your time while cutting and keep your cutter head on or better yet inside the line that you've traced, well, you can shave hours off of your time at the grinder.  I cut out a window just yesterday and spent 3 hours cutting glass and then spent just 40 minutes getting everything to fit together at the grinder.  The kicker is that this window had almost 100 pieces in it.   Just because you like to grind doesn't mean that you should allow yourself to cut poorly.  Slow down and master this craft that you love so much.   Never forget that slow and steady wins the race.

So then, Tasha's Woman In A Hat Window is certainly striking and sure to turn many heads.  She did a wonderful job on this and is moving along quicker and quicker each week she's with us.  Like all of our students she started out with some skills that needed some extra work but as you can see, she's got all of her skills down now. 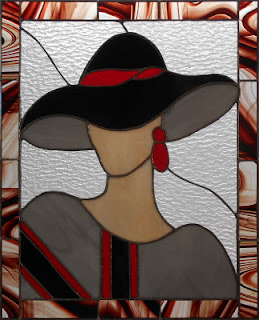 Cindy has officially completed her Six Sided Panel Lamp and look at what a wonderful job she did on it.   The key to a good panel lamp is precision grinding and wrapping so that each of the panels line up with one another.  Because Cindy paid attention to all of that, this lamp aligned together perfectly.   She's applied a brass channel to the bottom edge of the lamp to help strengthen the bottom edge and this lamp is rock solid (unlike the cheap ones that you find in store now days.) 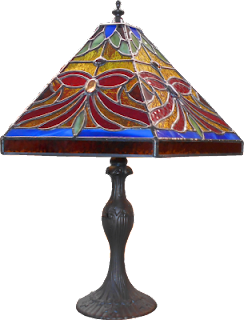 Linda L's Love Window really turned out wonderfully.  In all my years of doing stained glass I have  to say that I've never seen anything quite like this.  The idea is very novel and we've had at least 2 students ask how she got the word 'LOVE' cut into the glass.  Tricky! 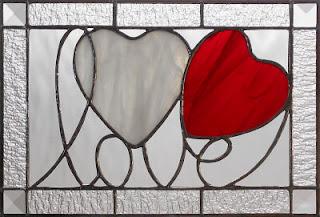 Terry got all of the soldering done on her Round Poinsettia and Ribbon window and it's another beauty.  The hardest part of making a circular window is keeping it perfectly round.  As you can see, Terry managed to easily stay within her lines and make this as round as round can be. 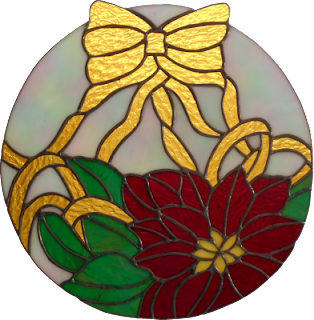 Martha put the finishing touches on her Deer Window this week and it certainly looks beautiful.   She's contemplating making a different Deer Window a little later on down the line but up first will be a Daylily Window.  As for this window, well, what can I possibly say that the picture doesn't. 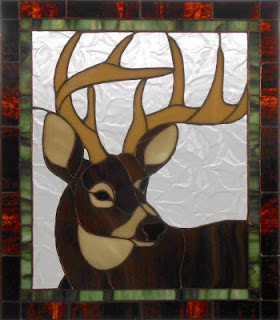 Rowena easily completed her Beveled 'S' Window and it certainly didn't need any extra bevels to fill up any blank areas in the background glass.   The oval that she put around the 'S' helped free the window from extraneous and ugly lead lines while filling up the window as well.  Very nice. 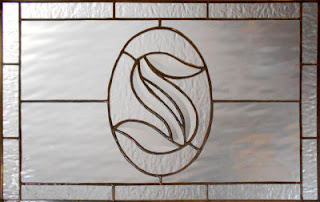 Tracey's Deer Window was made from the same pattern that Martha used but Tracey went with a completely different color scheme which makes the windows look very different.   Tracey's soldering abilities are really starting to take shape and I suspect that it won't be long until she's an old pro at this. 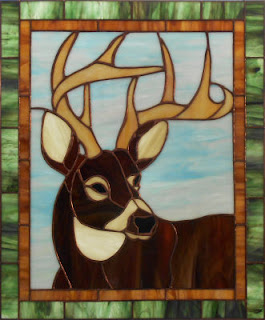 Bonnie managed to keep pretty busy this week as she completed her Pumpkin Suncatcher (which she will be displaying in a plate easel), and two of the cutest Ladybugs I've ever seen.  Although the pumpkin is large for a suncatcher, both ladybugs are so small that they can easily reside on top of the pumpkin.  Small is never easy but I really do believe that Bonnie had fun making these. 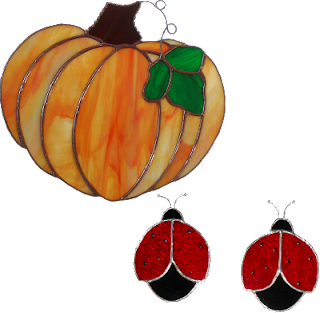 Sheri completed her Curved Wing Butterfly while she was in class and even had time to move along to cutting and grinding another.  She had a great time seeing how this was tacked together to form all of the curves that make these Butterflies so impressive. 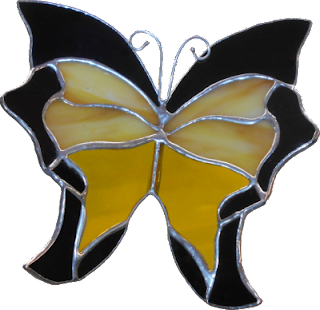 This week Susan R manage to get all of her Welcome Window wrapped and then tacked together.   She's was unsure what color border she wanted to go with so we'll see what she picks when she returns next week especially since the front side is essentially soldered.

Shelley's Kokopelli Window is now all ground and fitting together perfectly.   I love how she always gets her panels squared by grinding it within wooden yardsticks-- it helps insure that her border will go on as straight as possible because there's no way that any pieces can extend beyond the line.   I'd honestly love to see this done on every window that is made.

Mary got to work cutting out the purple glass that she's making her Iris Window with.   The glass is very rough and certainly feels as though it should be hard to cut, but by using a light amount of pressure on her cutter Mary was able to score these pieces and have them break just the way she wanted them to.  This is going to be another beautiful window for sure. 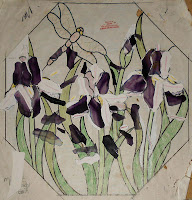 Susan D spent her time soldering the edges of all of her leaves and making sure that the outer edges had a bead on them.  Without a bead the copper foil would surely pull away from the glass especially since this project will be outside in the element (i.e., the weather) when it is completed.   If you ask me these are as sturdy as they can possibly be.

Myrt is busy grinding away at her ribbon bordered Fleur De Lis Window and she's making excellent progress.   A great portion of this has been ground and it won't be long until Myrt is ready to begin wrapping.  Sadly, wrapping that heavily textured clear background glass can be tedious.   A wooden dowel with a sharp point on it is VERY important for getting into all the nooks and the crannies on the back side of the glass. 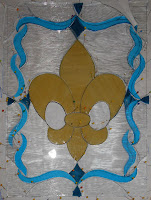 This is the second Butterfly that Sheri worked on this week and as you can see the lowermost part of the wing doesn't quite fit the pattern.  She had one piece of glass that broke while she was cutting it and it was so close that we altered the other two pieces that it touched so we could still use it.  Once this butterfly comes off from the pattern you'll never suspect that we changed it. 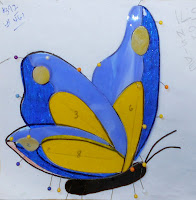 Jeannette came in and worked on getting her final border attached to her Large Pumpkin Window.  once that was done she began soldering the front side of this window.   Before the front side was completed I cut four pieces of Zinc channel and Jeannette got those attached as well.   This window is very close to becoming a completed project and it is very lovely indeed.

Betty began work on this geometric design and she's not only moving along quickly with it- she's moving along precisely as well.   Symmetry is VERY important on a window like this and in just one class Betty has managed to get everything cut out and even partially ground. 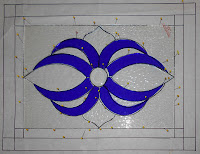 Roxane was back in class this week and she got the entire front side of her Cross Window soldered.   With just the back side of this window left to solder, and with some of that back side soldered already, I'm going to say that it becomes a completed project when she returns to class.  I can't wait to see this lit up. 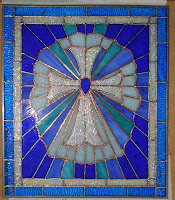 Angie is back with us for the month of October and she started her version of the Woman In A Hat Window while she was at home and almost completed it while she was in class.   She decided to go with two borders and is just about ready to get the final border attached to her window.  Once that's done she's free to solder.   I'm going to say that this will easily be completed upon her return. 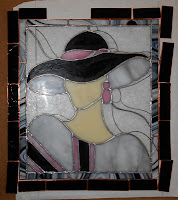 Cindy has started a very small Mermaid Window which will be measuring just 8 inches wide.  That's not a lot of space,but Cindy is still managing to get a lot of detail in that little Mermaid.  She's cutting the scales for the mermaid tail one at a time and grinding as she goes just to make sure none of the detail is lost along the way.

Brenda got the background cut for her first small Beveled Transom Window  and you couldn't even begin to guess that the bevel clusters were altered to fit inside of her beveled border.  I'm not sure what will happen next for Brenda though.   She can either finish this off with a border and some solder or move along to get the center of the second window while she's fresh off cutting the background to this one.

Mary Grace got the front side of her Hibiscus Window soldered and we were able to knock out the two pieces of the leaves that stopped at the edge of the left side border (see the red arrow below).   Since all of the other leaves overlap the borders it was odd to see one leaf cut flat.   After knocking out two pieces we replaced them with longer leaves and now the effect is complete.  This will almost surely be done next week. 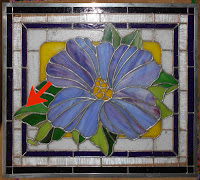 After she completed her Beveled 'S' Window, Rowena started working earnestly on  this Sunflower.  She's already begun wrapping these pieces so we'll surely be seeing her working on something new when she comes back to class. 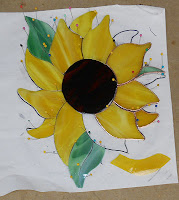 When Jan came in she had all but one piece of her Flower/Sunburst Window wrapped.  The only reason she didn't wrap that last piece was because it wasn't cut yet.   After she tacked the other pieces together we were able to put a piece of glass under her window and then trace around the edges of the missing piece, then a quick skim on the grinder gave her a perfect fit.  With the front side of this almost soldered I'd say that Jan is well on the way to carrying this window home as a completed project when she returns.

Ann re-cut a few of the pieces to her latest Stylized Cross Suncatcher and then set upon grinding it.   Once that was completed she started wrapping all of her glass pieces with copper foil and by the time she left it was all wrapped and ready ti be tacked together. The most amazing part of this story is that she got all of this done in just one short hour!  If she hadn't had to leave early she would have easily finished this in just one class. 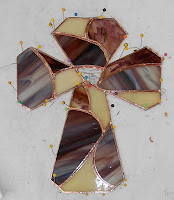 Barbara H has officially finished cutting all but the borders for her Tulip Window.   Once she cut out her final piece she put a metal square on the lower left corner of her window and then moved on over to the grinder.   If you look closely you can see that she already has a good start on her grinding and I think Barbara is more comfortable than ever when it comes to making stained glass.

And that's it for this week.   Classes start again tomorrow so expect to see even more windows completed when we return again.