The Colorful World Of Black And White

Your windows will only ever look as good as your pattern.   Sure, you can make minor changes 'on the fly' but there's only so much you can compensate for.   When tracing out your pattern onto poster board it's so very important to take your time and to follow the lines on the original pattern as closely as possible.  Rushing through this important step will almost always cause your window to suffer.  In the picture below you can easily see how the hand traced copy (on the right on the florescent yellow/green paper) follows every nuance of the original pattern.   It your pattern pieces start off badly, your window will surely finish that way as well.   And pay attention to how you cut up your paper pattern with scissors as well.  Your window will only ever look as good as your individual pattern pieces look. 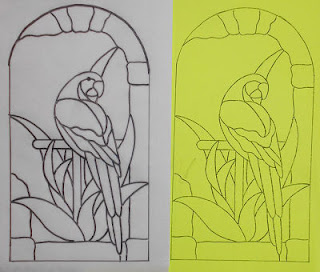 Well now, Jeannette completed her Donald Duck Window and as I always say, you just can't lose with a comic character window.  They make perfect stained glass subjects due to the fact that they use a limited color pallet.  Jeannette did most of the work on this while at home bringing it in only to solder.  The end result is truly brilliant, wouldn't you say? 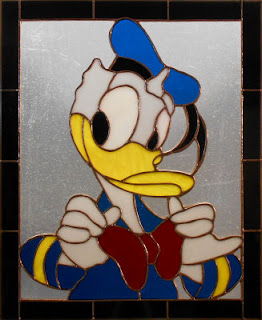 Terry's Poinsettia Wind was completed this week and what a burst of color it is!   Her use of glasses with varying degrees of transparency really makes this window sparkle when it has some light behind it.   The pieces are plenty but the troubles were few for Terry as she completed this in record time. 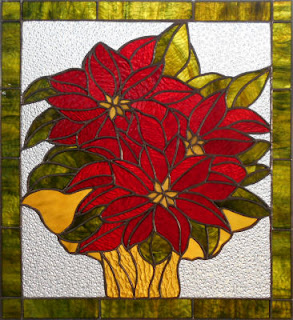 Betty finished her Geometric Window this week and the blue and clear textured glasses that she used combine to make a very striking window indeed.  All is symmetrical in her work making this a great example to show how precision work pays off. 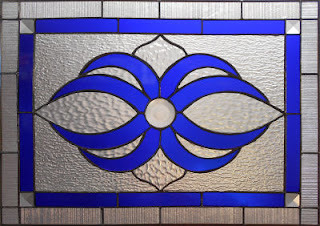 Tasha finished her smiling Teeth Window and although it's an odd subject matter it's a wonderful window when it's completed.   This is going to be a gift for a friend who's a Dentist so in the end it's the perfect window for that application. 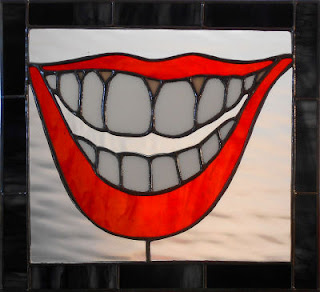 Linda L made these two Cardinal Suncatchers quickly and efficiently.  Everything from the cutting to the soldering flows together masterfully, and that's a fact! 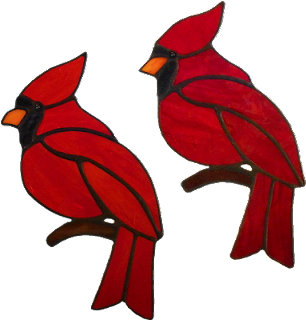 Sheri completed her second Crawfish Panel and did something slightly different with this one.   As you may recall she used a painting as the inspiration for this design but after the first one was completed it was pointed out to her that the legs of the crawfish were actually coming out of the wrong place.   She's re-positioned the legs on this second window and all is right with this beautiful Crawfish.

Melissa completed her first Cross Suncatcher while she was at home and brought it in for some VERY minor touch-ups and a hook.  The end result is a beautiful cross that Melissa already has more of in the works (as you will see later on down in this post). 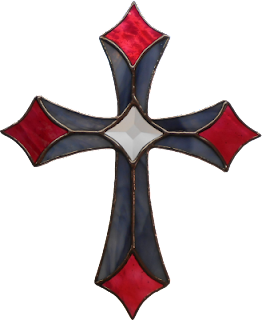 Tracey completed her first Butterfly Lawn Ornament this week and it turned out beautifully.   The wings perfectly aligned down the center perfectly and her soldering was out standing.  Next up for Tracey is a 3D Bumble Bee! 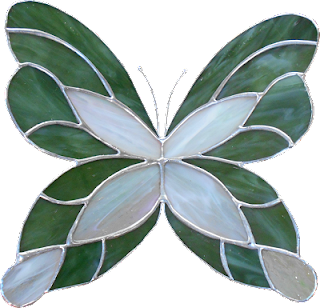 This is Lara's interpretation of Van Gogh's Starry Starry Night Painting.  It was a little overwhelming starting it but by just working on one color at a time you can see that Lara has made wonderful progress on this in a short amount of time.  In case you aren't familiar with the original I'll post a side by side when this is completed.  It's already looking fantastic. 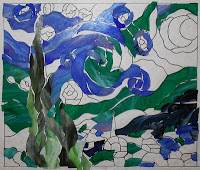 Roxane pretty much worked on her own this week and when I checked things out near the end of class I was amazed at how much of the grinding she had completed on her Compass Rose Window.   Roxane fully understands the importance of grinding within the lines as this window plainly shows you.   This will be a delight to see completed and I don't think that will be too long from now. 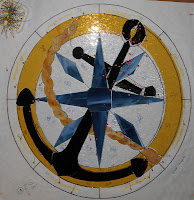 Terry has also been hard at work on her latest Caduceus Window.   Yet another hand drawn design, Terry has a full command of all the required skills needed to make stained glass. 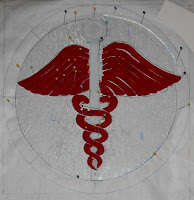 Linda L is making great strides on her Mickey Mouse Easter Window  with just one day of work on it.  She's picked out some wonderful colors for this and you can already see how it will all come together. 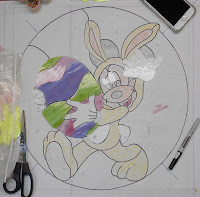 Jan's making a beautiful Mother Mary Panel and she has it all cut out, ground and ready to be wrapped.  I love the look of this and may end up making one myself.  Once this is tacked together Jan will add a background glass and a border to 'square' it off. 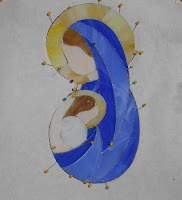 Linda F now has all of the glass cut for her Nouveau Tulip Window and she's already midway into the grinding process.   I'm thrilled at how Linda knows that when something doesn't follow the pattern on one side it has to not follow the pattern on the second side as well.  It's only a mistake if both sides don't match! 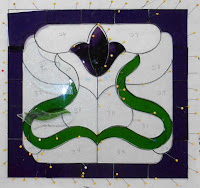 Next up we look at Susan R's Fall Harvest Pumpkin Window.   It's all been tacked together and she's currently working on her multi-colored corn kernels.   These really look great and the best thing is that she didn't have to cut them individually because she found a container of glass beads at a local hobby store.   She still had to wrap them and she needs to cut a few of them in half to fit perfectly but that's easy compared to the work that she would have had to do if she hadn't found the beads. 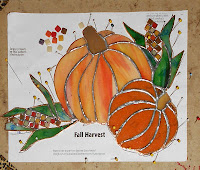 With her grinding coming along every bit as great as her cutting, Mary Grace's Tree of Life Window is certainly well on its way to becoming her defining piece.  I can't begin to tell you how impressed I am with her progress on this. 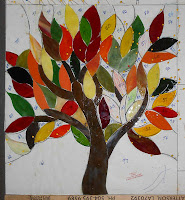 Fran was back in this week and quickly resumed work on her Fish Window.   Now she has the water cut out and although you cant see it while it is lying down on the table, the density of the glass varies in accordance to the depth of the water.  It's little details like this one that helps draw a viewer to study a window more carefully.   Little things mean a lot. 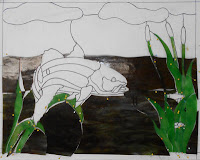 Bonnie has a number of irons in the fire but this week she spent time making these three Suncatcher Tree Ornaments that incorporate bevels and two pieces of glass.  We'll surely see what these look like completed when Bonnie comes back in. 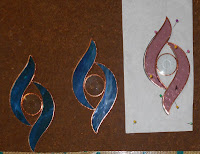 Betty also resumed work on her Rose Window and she's up to the point of cutting out her background.  With her borders tacked together she will be able to start grinding this when her last background piece has been cut. 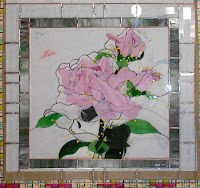 Tasha not only finished soldering her Smiling Teeth Window but she started on these two Beer Glass Suncatchers as well.   These are being done as mirror images and the pair will be gifted to someone who will surely appreciate this wonderful design.   I like how the suncatcher hangs at an angle but the beer itself stays level.   I believe that is what makes these two Beer Glasses look so realistic. 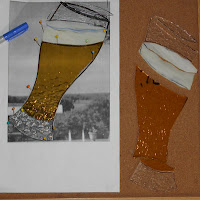 Cindy's Mermaid Panel is ready for solder and that means that it will be completed upon her return.  You can't see them now but there are tiny little letters fired into the sailors cap that she's wearing.  We'll show them to you in a close up when you see this in its finished state next week. 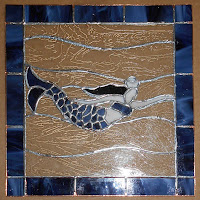 Susan D has moved on to a new project this week which is a large Santa Suncatcher.  She's started this by working on Santa's face because it's the hardest part of this design.  Everything from the neck down should be a piece of cake for Susan.

As I said earlier, that Cross that Melissa made at the top of this post was just the tip of the iceberg.   Here you can see that she has three more already cut out and ground.   And there are even more just cut out waiting to be ground.  Melissa is becoming a Cross Making Machine!

Myrt got all of the glass pieces in her Ribbon Bordered Fleur De Lis Window wrapped and tacked together.   After that she then picked a color for her final border and got that cut into its individual pieces.  Next she'll skim these and wrap them, allowing her to begin the soldering process for this window. 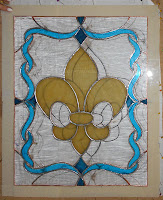 Martha has the glass for her two Cross Windows all cut and ground so she's taken these home to possibly start soldering them during the week.   These need to be done by the end of her next class and I have no doubt that she'll be making that dead line.

Rowena's 'C' window was completed by the time class was over with but there wasn't any time to wash and color it so that's what's on the agenda for Rowena when she comes back into class next week.   This window is a done deal so expect to see it hanging when you see it again.

There's only the soldering left to go on Brenda's beautiful pair of Transom Windows.   Hopefully the next two weeks will be nice, easy, and relaxing for her as she does another one of her wonderful soldering jobs.

Shelley is making her own Tree Of Life Window and this week she got started by tracing out her pattern and then distributing all of the leaf pieces into 7 different piles.   Each pile will be a different color and how it turns out is how it turns out.  You can't lose with this pattern and spending too much time deciding what color goes where is only an exercise in futility. 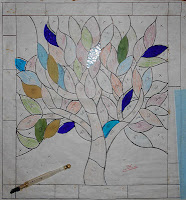 Next up we have the Bee that Tracey cut out and ground in just one class.   Don't forget that she also soldered her Butterfly as well making this past Wednesday one VERY productive night.  She's doing wonderful work on this and it may very well be completed when we return next week.

Becky had an idea that she wanted to use baroque glass for the border on her Geometric Window but the color she was originally thinking about didn't really work with the window when we put the glass next to it.  in the end this was the hands down winner.   We may even get to see this cut for it when Becky returns.

And there you have it.  This time change is really messing with my head so if you find too many typo's in this you know what the problem with me is!