She Says It's A Gladiola


Last week we read how Linda had some problems getting the small pieces of glass that surround her Owl's pupils to fit.   Once I showed her a 'trick' all went well.  This week I'm sharing this trick with all of our readers.

In image 1 you can see that the pupil of the owl is surrounded by three small pieces of glass, all of which I've colored in red.   The first step in making these 4 pieces manageable is to  NOT cut the paper pattern into 4 pieces (yet).  First just cut the pattern as if all the red sections would be just one piece (one large oval covering 4 pieces).   Trace this large oval onto the glass of your choice and then cut the smaller center pupil out of your paper pattern and trace it onto and cut it from a different colored glass.    You should now have 2 pieces of glass as shown in image 2.

Grind the large oval so it fits within the lines of the pattern as shown in image 3.  Remember that if you can't see the patterns all around the glass that you are grinding then it needs to be ground even more.  Remove your large oval from the pattern and now grind your small pupil to fit within the pattern.   Once it fits position the glass pupil piece into place on top of the larger oval.

Using your ultra fine point Sharpie marker, trace around the glass pupil and add the lines that radiate outward from the pupil to the outer edge of the larger oval as you see in image 5.  Now take your cutter and score across the large oval horizontally.  Use your running pliers (adjust them for a tight squeeze to help the break follow this short cut more accurately).   Next make the vertical cut on the bottom piece.   You should now have something that looks like image 6.

Now that all of your glass is cut you only have to grind the pieces (in this case using a small 1/8th inch grinding wheel to get into these deep curves).   Once you grind the line away you should have three pieces that look like image 7.   Position your pieces onto your pattern and drop the center pupil into place.  If it doesn't fit with a little wiggle room for foil you may have to grind a little more off of the larger pieces.   You'll know you've succeeded when your pieces look like image 8.

Given time you'll eventually be able to just glance at a pattern and quickly pick out sections where you can use this handy and extremely time conserving tip!

Up first in our completed projects we have MiMi's Bull Flag Window which she did a beautiful job with.  She's extremely hands-on and that always leads to a fast and efficient learner.  Her next window will have more pieces with even more intricate cuts which goes to prove that MiMi isn't afraid to grab the bull by the horns.  (omg) 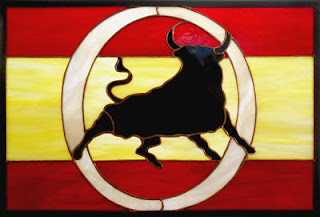 Brenda made this beautiful LOVE panel while she was at home and her work is spectacular.  I'm so glad that she brought it in for a picture because I think this will certainly inspire other students. 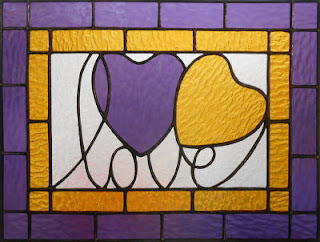 Linda L's Dolly The Owl Lawn Ornament was finished this week and it's yet another project that Linda can be proud of.  The random use of colors ensures that this will easily stand out when it's placed (or should I say 'staked') in her garden. 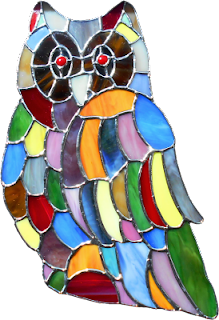 Next up we have a stunning Initial Window that Terry drew up and created entirely on her own.  I love how perfectly all the curves that form the letter 'H' flows throughout the design and feel that this simple window is among one of her best pieces all around. 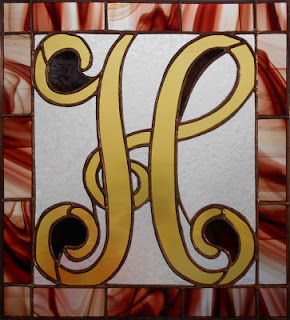 Cindy made a 3D Butterfly this week but not the garden lawn ornament that you might be thinking of.   This one hangs from it's center and actually rotates to reveal two different butterflies as it spins.  It's a design that's both different and eye catching. 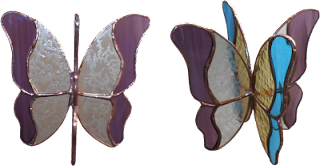 Rowena's first of two completed projects this week is her beautiful Magnolia Window.  She's at the point now where she can knock these out entirely on her own (as the photo below proves.) 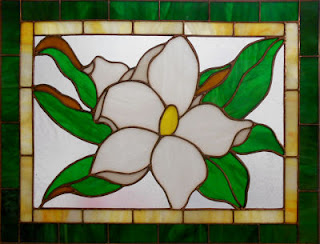 And then Rowena put the finishing touches on this thoroughly Modern Art Suncatcher.   It's a beautiful way to use up thin leftover border strips and it's VERY easy to assemble once you know what can and can't be 'off' while grinding and assembling it.  This one is all 'on' however, as are all of Rowena's projects.

Angie worked so diligently on her Bird Of Paradise Window this week that she got it all cut out, ground and soldered except for the back side.  That means that we'll surely see this completed upon her return next week. 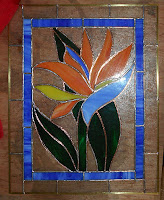 Beth is somewhat between projects and needed to get a few suncatcher gifts done so that's what she started this week.  She settled on two very different crosses and both look great in their own respective ways.  I suspect that Beth will be grinding when she comes back in.

Shelley completed her Tree Of Life Window just last week and already has all of her new Chef Window all cut out.  In fact, she's begun grinding it and before I could tell her to pay close attention to the tiled floor she already had that section completed.  It can be a tricky section because if the points don't line up the illusion of the diagonally tiled floor falls apart.  As you can see, Shelley avoided that pitfall entirely without me even having to mention it.  :-) 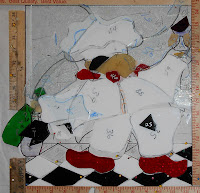 We are very near the moment of truth for Susan R's Pelican Suncatcher.   She told me that even she didn't even know that this would be assembled to be a 3D project with flapping wings.   I can't wait to see everyone's faces when this gets put together. 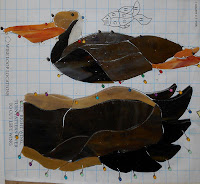 Patrice now has her Sunflower window all tacked together and even has her border cut, ground, and mostly wrapped.   There's a very good chance that this will be completed upon her return and I have no doubt that she's going to LOVE it when it's washed up and has some light behind it.

Rowena also started work on this Cross Window that we've seen her make before.  It's a popular pattern with her and this one will feature an inner border made up of bevels.   I was going to say that I wasn't sure if we've see it done that way before but judging by the pattern I'd say that it surely has. 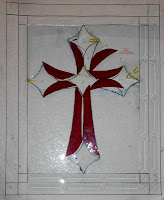 Susan D's Peacock Window is really coming together now as she shakes her tail feathers to get this completed.  She's modified the original pattern and surely doesn't mind a challenge because these tail feathers are FAR more complex than any of the other Peacocks we've seen done here in class.  Oh, and the iridised glass just works so well with a peacock.

Jan is very close to completing her window and I've placed the plate she's using as the centerpiece into position for the picture this week.   The top picture (which at first glance appears to be all stretched out and blurry) was actually taken by positioning the camera at the bottom and against the window pointed upwards towards the top.  This view shows you just how much higher the plate is raised above the surface of the rest of the window (enlarge it by clicking on the picture).   Soldering on this begins next week for Jan. 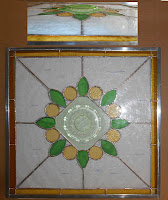 Tasha is back with us and her Cat Window is all tacked together save for the final border.  Normally I don't care for alternating colors in a border but I knew this one was going to look great so even though it didn't look like we'd have enough glass to accomplish it, we worked on trimming the border slightly thinner until she had enough glass for the job.  As you can see it went together (but not with a single piece of gold glass to spare).

Mary Grace has completed cutting out all of the purple flowers on her  large Iris Window and will next move along to the green leaves and stems when she comes back in.  Once those are cut out she'll get a real good feel for what this window will look like after it is completed. 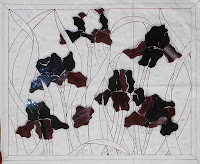 Lara has picked the perfect blue background glass for her Indian Headdress Window.   It allows all of the bright colors to shine without hiding them in a color whose contrast is so deep that it would mute all of these wonderful colors.   Next week she'll fill in the remaining pieces and then pick out some border colors. 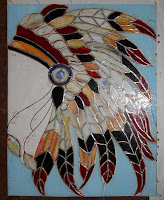 Linda F's Victorian Styled Window has each of its borders attached and it's all tacked together as well.  It's a beautiful design but what you can't see is the fact that she's used all cathedral glass ( translucent mono colored glass with texture on one side) for this project.  Victorian designs really lend themselves to this kind of glass so this window will look a little different once we get some light behind it.

Myrt finished up the remaining work on her ribbon border and has moved along to the final(?) border that straightens this into a rectangle.  Once that's done (and she's already got each of the pieces cut out already) she'll have to decide whether she wants to end the window here or if she wants to add a final border to frame it all out.   I can't wait to see what she decides to do. 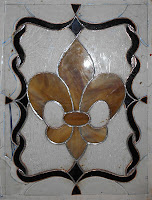 Cindy is prepping for a show and she's making a lot of small items including this UL Pepper Suncatcher.   It's all cut out now and that means that Cindy will be spending some quality time at the grinder when she comes back in!

Martha's Deer Head Window is looking VERY much like a Deer Head now.   She's done the lion's share of the grinding already and it looks like she'll be working on the antlers when she comes back in.

With all eight of her Fleur De Lis ground and pinned into place Melissa is about to start wrapping and tacking them together.   I was thinking that she'd cut her background next but now that I look at this I can see where she might want to get the 16 inner border pieces cut, ground, wrapped and tacked instead.  Neither way is better as they both have their pros and cons so it's just a matter of choice.  I just love how meticulously Melissa has this fitting together. 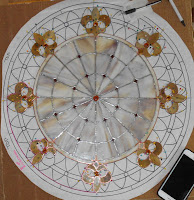 Here's Brenda's first of two Beveled Transom Windows.  Although it's finished, there wasn't enough time to color it before the class ended so she'll add black patina to this upon her return.  Not only that-- she'll also start cutting the background for her second window as well.

Betty's Double Sunflower Window has its front side all soldered and as you can see she has the back side of it almost completed as well.  There is NO doubt at all that this will be finished when she comes back into class and as much as she likes this already, well, I know she's going to love this when it is hanging up with some light behind it. 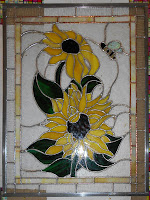 And in wrapping this up I have to admit that Roy got out of the door without my getting a picture of his Cross Window.  It was all tacked together before he left and I believe it even had a channel attached to it already. (We have 30 students so I sometimes have a hard time remembering  little details like that.)   With just a little soldering needed to go before he finishes it I think it's safe to assume that he'll handle most (if not all) of the soldering while he's at home.  I can't wait to see what he comes in with upon his return.