Our tip of the week deals with how I work.   That doesn't necessarily make it the 'correct' way to work, but here's my thought process and in the end what works best for me.  After I trace out my pattern onto poster board I only cut out the sections that I will be working on there and then.  In other words, I don't cut up my paper pattern all at once.  I find that pinning down all of those freed up pattern pieces onto my pattern slows me down immensely since I have to weed through my cut pieces of glass for the pattern pieces that needs to be cut next.   Instead I work one color at a time which also saves me time by allowing me to not number things.  By working with just a few pieces at a time I move quicker and much more efficiently.   Patrice is trying out this system with the window that you see below and you can see that she's cut out two of the flowers from her poster board pattern.   We'll ask her what she thinks when she's finished it and let you know the results. 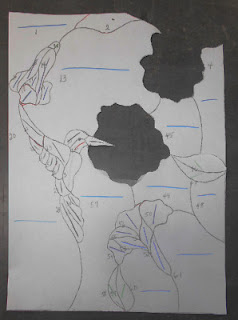 Rowina's Fish Window is truly a work of art.   I'm usually not a fan of realism in stained glass but this is one of those windows that's the exception to the rule.   Everything about this is top notch and Rowena should be very proud of it.  It's even inspired me to make a fish of my own. 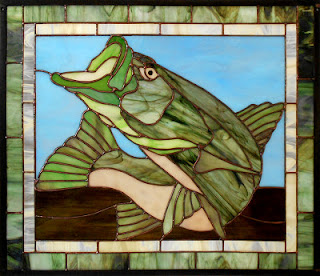 Well now, just look at this Crab Window!  MiMi made this as a gift and I can't imagine anyone being anything other than thrilled to receive it.  MiMi's work is outstanding and her glass choices are impeccable!  And just wait until you see what she's starting when she returns next week... 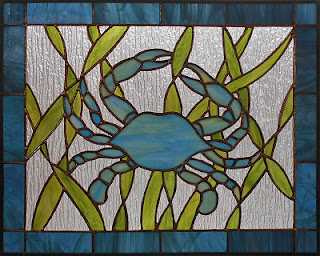 Becky has two out of three of her Frank Lloyd Wright Styled Windows completed this week and they are marvelous!  She's been so concerned about how everything lines up and that  solicitousness has paid off in spades.  Below is the window that will be repeated on both ends of her set of three windows. 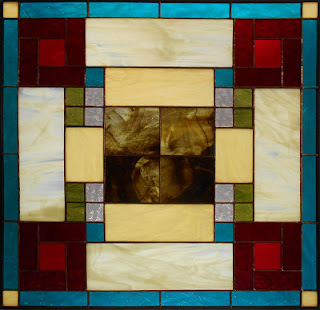 And here is the solo window in Becky's set of three.  This one will be placed in between the other two windows.   When Becky completes the third window I'll post the entire set so everyone can see the full effect. 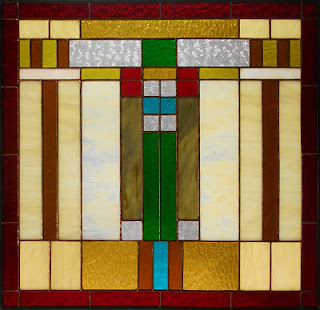 Shelley's Buxom Wine Ladies Window is finished and it's as charming as you could ever hope for it to be!   Now that it's been washed you can easily see these two women in all of their glory.   I will admit that they were hard to make out when Shelley started this project but now there's no mistaking them!  They look like fun.   If they have a third glass I might join them for a drink or two... 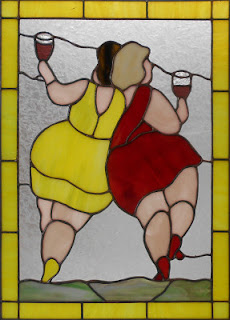 You've got to have Faith or at least that's what Carol is saying in her latest word window.  She's got a series of these inspirational windows in the works and although this week it's Faith while next week's will be.... well, I'm not letting the cat out of the bag.  Come back next week and you'll get to see what her newest window says. 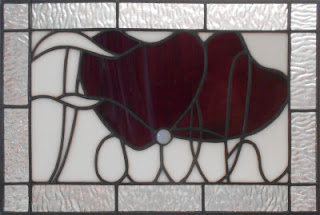 Next we have Rowena's Duck in Flight Suncatcher and it's another winner for sure.   This pattern is catching on as a third student asked for a copy of it this week.  Rowena's excellent work on it surely helps sell this pattern, that's for sure. 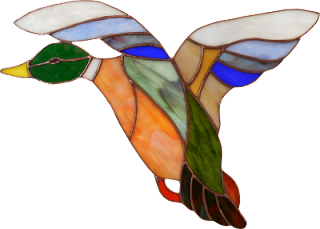 Flight School is almost officially over for Tuesday night class as Cindy, Martha, Myrt, and Terry each completed their Airplane Kaleidoscopes.   Martha made two of these so that explains the extra Aeroscope in the picture, but what about Brenda?   Well, when she returns we'll see what we can do to get hers off of the runway.   She's got a lot going on at home and we're sending both she and Donald our very best. 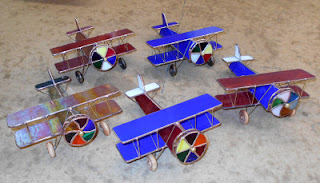 Sheri's Coffee Window is really coming together quickly as she now only has the background left to cut.  Once that's done she can begin grinding.   Now that there's glass on the pattern you can really see the word 'coffee' in the window.

With her hair all cut out, ground and tacked into place this Lady Emerging is looking better than ever.  Susan R has traced out a new background pattern for this and will begin cutting out the glass for it when she returns next week.  With no border on this window her cutting will need to be exact for this to fit in the opening that Susan designed it for.  That said, I have no doubt that it will work out perfectly, 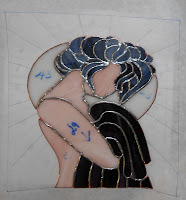 Patrice has the first flower of her Humming Bird and Morning Glories Window cut out and she'll soon start a second flower.   By keeping her paper pattern basically intact, she won't have pattern pieces hogging all of her pattern as she's laying out her glass.  She also won't have too many pattern pieces to keep track of. 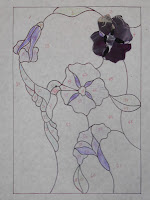 Jan saw this Mary and Child Panel on the internet and after tracing out the pattern last week she got to cut some glass for it this week.  With all of her glass cut she's ready to move along to the grinding process which (as you can tell from the pins) has already begun. 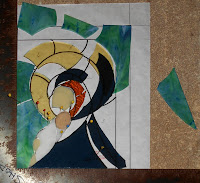 As you may already know, Barbara has decided to make the same Mary and Child Panel that Jan is making and she's got 6 more pieces fitted together than Jan does so it's a little easier to see just what this looks like here.   Be sure of one thing though:  THIS IS NOT A RACE!!!!

With her final border cut out and ready to be ground, Beth's Sand Dollar Window is just about nearing completion.   I have no doubt that the final border will be attached when she comes back in and she'll surely get to soldering this as well.  How far along will she get?? come back next week and see! 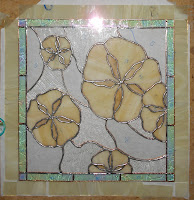 Look out because Linda L got the front side of her Underwater Scene soldered in just one class.  And when I say soldered, I mean soldered beautifully!  Because of the amount of time it will take to wash and color this it won't be completed next week but I'm fairly sure it will be the following week.  The bottom of this window really looks alive with each of those  different colors of sand.   All of those colors help add some realistic looking depth to the sea floor.

Well now, this may look familiar and that's because it's the third panel of Becky's set of three Frank Lloyd Wright Styled Windows.  It just so happens that this one perfectly matches one of the windows that she's already completed.   Everything on this has been ground and Becky is ready to start her foiling now! 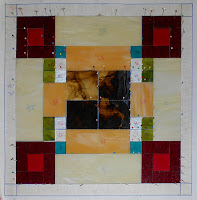 Susan D has her tree of life all tacked together now and is ready to begin working on a double border for it.   She wants to go with an amber glass for the thin, inner border but what we had in the shop was either too dark of too light so Susan will be bringing in a piece of glass that she has at home next week.   Hopefully it will be right in between the shades that we have here in the shop.

Jeannette's J Window has its front side all soldered and now she's working on getting solder on the back side of her window (as you can plainly tell by the backwards J in the picture) .   I have little doubt that this window will be posted as a completed project when we next return. 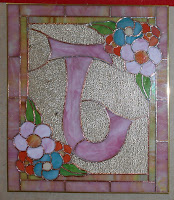 Next we look at Roxane's Compass Rose Window which she was soldering this week.   Like Jeannette, Roxane has the front of her window completed which means that she'll be flipping this over and soldering the back side when she comes back in. 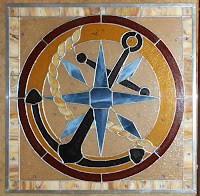 Last week Melissa discovered a small trick that helps to keep the marker line on the glass longer while she is grinding.  This week she moved quickly through her pieces getting far more accomplished than she did the week before.   This Autumn Leaves Window is really coming together now!

Mary came in and wrapped the final four pieces of background for her Dream Catcher Window and then worked on tacking everything together.   Once that was squared away (literally) she picked a color for her first border and got that tacked into place as well.   She's moving along quickly and I have no doubt that her second border will be attached when she comes back in. 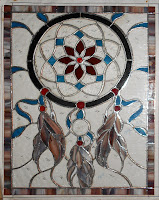 Betty's doing a second Noel Window and she officially got it all ground and ready for foil.   She's a little unsure if she'll make it in next week but if she does I'm thinking that this will be completed. 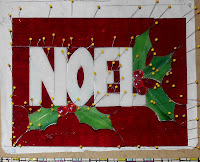 And this is Tracey's second Cardinal Window.   It looks like she's just about got this all cut out so she'll be able to start grinding before you know it.  I know she's upset that it doesn't fit together better but this is par for the course when you cut out a window-- it NEVER fits together nicely until you hit each piece on the grinder. 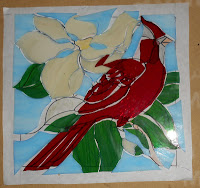 Lastly we look at the next Butterfly Lawn Ornament that Rowena is working on.   She was grinding it when she came in but as you can see she's past that now and well into the wrapping phase of this Butterfly. 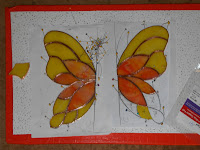 When you realize that we had 11 finished projects this week you realize that things were hopping in our classes!  And things don't look like they'll be settling down soon either. Come back next week and be prepared for even MORE beautiful work done by our students.