Our tip of the week is actually more of a hint of the week.  Sometimes you have small sharp angles that you want to grind a corner into like the piece below.  If you don't have a glass saw you might think it's impossible, but there could be a way to grind these by using your 1/4 inch bit in a slightly different way. 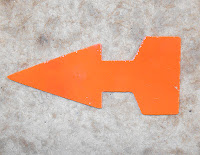 By holding your glass piece vertically against the small grinding wheel rather than horizontally you can make tight angles as shown below.   A word of warning though-- it takes practice and you MUST hold a sponge against the grinding wheel as you do this.   Also, be quick when soldering these areas as they WILL break more easily than other pieces due to that sharp corner.

Okay now, Brenda put the finishing touches on her Caduceus/Rod of Asclepius Window and she even cut and attached the border all on her own.  Using a different gray glass for the circular border was a great and almost unintended choice as it prevented the duller gray from washing out the window in a mass of gray. 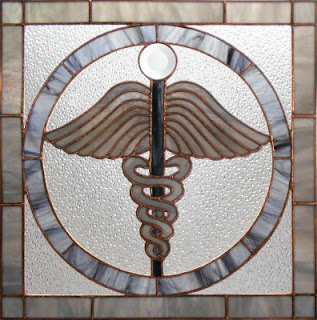 Jeannette got two suncatchers completed while she was in class this week and since the Cross was something that she hadn't originally planned on making she was happy to see it completed quickly.   Both suncatchers turned out lovely and Jeannette is already moving along to a new project. 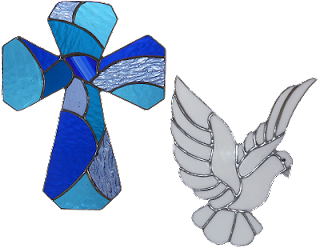 This Iris Window is something that I've been making for almost 40 years now.   My Uncle drew it up for me long ago and although he's no longer with us his Iris will go on forever.   I usually don't worry about colors nearly as much as our students do but I put this window on hold for a week until the blue/green border glass came in since I couldn't find anything else that really worked for me.

Linda L is working on a new window and you'd be remiss to not know that this is the Houston Astro's Logo.    There are some sharp points in this design and yes, if you look at the top piece of orange between the 'H' you'll see that this was the subject of the tip of the week in this post.   Linda will make this window in two distinct sections-- the center Star/H which will be tacked together and then the lettering that spells out Houston Astros. 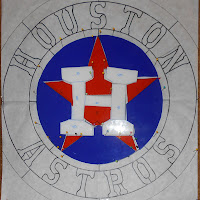 With another bird completed in her Humming Birds And Flowers Window, Martha is approaching the end of this project.   Everything fits together like a glove and this is definitely going to be a big feather in her cap when it's completed. 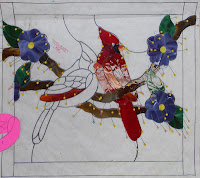 Cindy began work on this clear textured Cross Suncatcher while she was at home and it's near finished already.   I have a funny feeling that both this and her Santa Face (which you'll see a little later) will be finished when we next see her. 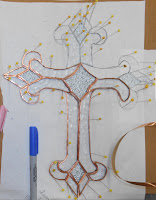 Sheri's first Circular Butterfly Window just needs a few more pieces of border wrapped and then she'll be soldering.   These Butterflies are large enough to bend a piece of zinc channel around them which will not only make them more sturdy but finish them off nicely as well. 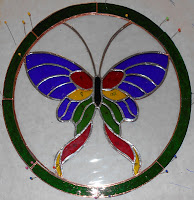 Terry's going strong on the second section of her two piece Spiraling Flowers Window.  She's got more than half of it cut out already and it takes her almost only seconds to wrap her pieces.   Moving quickly is the name of Terry's game. 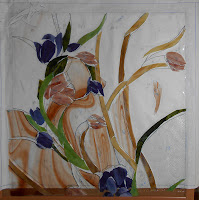 Here's a look at the Santa Face that Cindy is working on along side of the Clear Textured Cross that we saw earlier on in this post.  This week she got the border attached to this as well as a channel and then she completed the soldering on the front side. 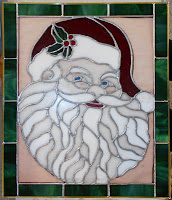 Patrice came in and immediately tacked her background into place and then mulled over different color combinations for a double border.   Although she initially wanted to use a bright green as an accent color she ended up changing her mind once she held it near her window.  Now her thin border is another hue of purple which accentuates the flowers wonderfully.  The final border finished off a pair of good choices made by her this week.  This is almost finished! 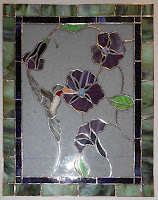 In the past week or two Becky S's window looked only marginally different from what you see her.  The big, but hard to see, difference is  that the Egret you see below is actually white glass that has all been cut and ground.    I can't wait to see this lit up!

Beth came in and got to work figuring out how to line her latest Iris Window with bevels.  She knew she was going to do this so the window was made to fit within a beveled border but Beth still had decide on the sizes and placement for the bevels on each side.   Once that was done she wrapped them, tack them and then cut out and ground a final border which she took home to wrap.  A busy night for sure.

This week we got to see Rowena tack together the Tiger/Louisiana section of her latest window.   She's picked out a background glass the should be in by the time she comes back and if that happens then she'll be ready for borders soon enough. 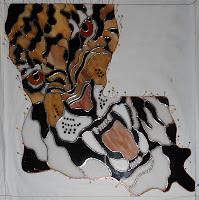 Shelley's Once Upon A Time Window officially got a face this week and the evil queen has never looked better.  Yes, this is stained glass and none of this will ever wash off or fade in the sunlight.   Excellent!

Mary got all of the grinding done on her Santa Claus Window and even had time to start wrapping some of her pieces.   What she didn't finish wrapping she took home with her so with a little luck she'll get this tacked together so she can get the beard and face cut out upon her return.

With even more of the leaded pieces ground and wrapped, this Industrial Fleur De Lis is looking better and better each week.   It won't be long before MiMi is cutting bevels for this which will end the anticipation of cutting something you aren't supposed to cut or grind. 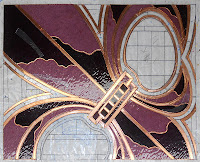 With all the fill-in pieces to her latest Cardinal Window cut out and tacked into place, Tracey was able to concentrate on getting her double border attached.  As you can see, she not only got both border ground and attached-- she also got a channel cut as well.  She's taken this home with her to solder so I can't wait to see how far she got when it comes back in next week. 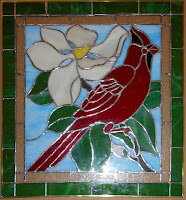 Susan R decided that she wanted to grind the pieces in the flower of her 1920's Lady so she could tack them together which I feel is a great idea.  Doing that will turn 12 pieces into one which won't be shifting around while she's grinding the pieces that surround it.  And after the flower is completed the rest of this will likely be a piece of cake for Susan.

Lara has the front of her African Woman all soldered and the back is so close to completion that I can't see any reason why this won't be completed upon her return.   Essentially, all she has to do is wash and color this! 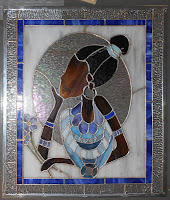 Here's another window that's just about 'out the door' as well.  Angie's Rose Window has its front side almost soldered already so this will get a channel and hooks when it comes back in.   Angie's work is getting better and better and she's certainly able to handle just about any problem on her own now!

Roy's working on a second LSU/Tiger Paw Window and since I forgot to take a picture of his progress I'm posting this view of his last version of this design.   This week he was able to get the claws cut out but I have little doubt that Roy will be much further along than that when he comes back in.

Lastly we take another look at something I didn't get a picture of.  Susan D worked on cutting the glass for both a Dragon Fly and a 3D Humming Bird.  I don't have a copy of the Humming bird pattern but this is the Dragonfly.   I'll be sure to give you a much better look at these when we return next week. 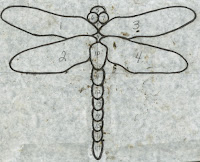 After a 2 week vacation, it's actually good to start to get things back to normal.  Thanksgiving  had us shift Thursday classes to Friday, but next week things will be right back to normal.