The Statute of Limitations


Mary's Santa Claus Window was completed this week and all I can say is, 'Wow, job well Done!"   Mary too her time, never rushed and never moved along until the piece of glass that she was grinding completely fit the pattern.  The end result is spectacular! 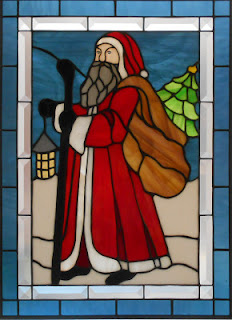 Betty finished her Angel Window which features a small amount of wire filigree to give the wings an air of delicacy.  All she did was bend wire into the elongated loop and then tack the ends into the solder that surrounds the piece that it's resting on.   Why not just cut it?   Because it wouldn't be near as elegant as it looks when doing it with wire since the wire can twist in a more natural fashion than glass can be cut in such a small area.  Can you spot the wire work? 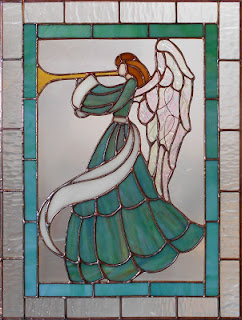 Cindy Completed this delightful Fairy Suncatcher which is larger than you might initially think.   It stands12" tall by 8" wide which explains how she was able to get so much detail into it.  Lovely. 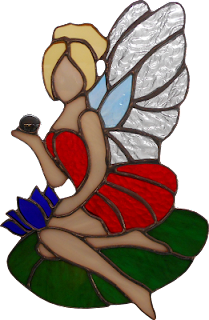 Carol's pair of Easter Bunny Lawn Ornaments will surely be a wonderful touch to her yard.  She's first out the gate with completed Easter projects (only by a day though) and I hope that other students are paying attention because Easter will surely be here before you know it. 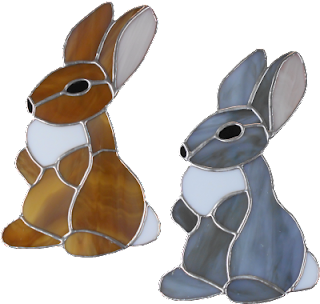 Jeff is our newest student and as long time reader know, a new student means we get to see a Butterfly.  Let me tell you that Jeff completed his with total ease.  From cutting to grinding to even the soldering, Jeff made it all look easy.   He'll start his first 'real' window when he comes back next week and I can't wait to see what it is. 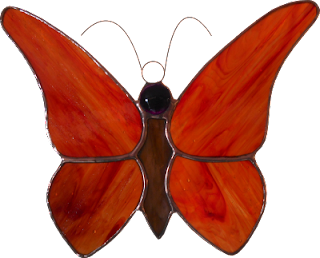 Jeanne M is the second of our three new students this week and his is her Butterfly.   She did a great job and I think she has a great eye for color so I can't wait to see what she decides to make as her first project. 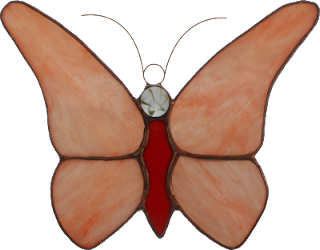 Kerry is Jeanne M's husband and since this was also his first class with us we're showing off a third Butterfly.  He had no problems at all making this and like I always say, 'A family that does glass together stays together!' 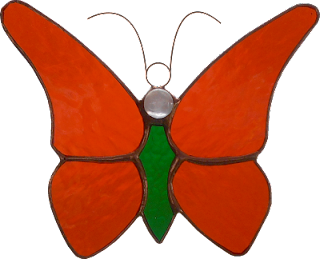 Rowena  finished an Easter Lawn Ornament of her own but this one is different from the ones that Carol made.   It's nice to see that we have Easter projects completed by two different people so early.   That's what I call good planning. 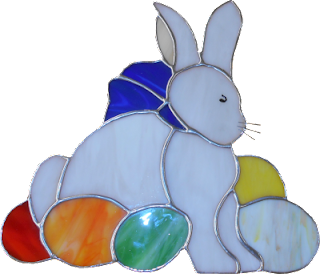 Rowena put the finishing touches on her Stylized Fleur De Lis Window and the black glass that she used is striking indeed.   I may be mistaken but when she first took a weekend workshop with us I believe that this was the window that she made.  Now she makes them all on her own flawlessly in just scant hours! 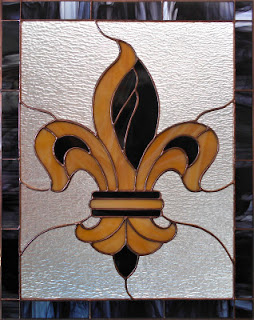 Here's Tracey's second Mary and Child Panel.   There are subtle differences between this window and her first version of this pattern but the work remains the same-- beautiful! 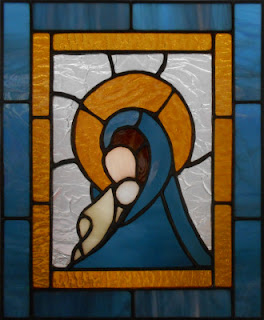 Roy sent me this picture during the week of two colorful window that he made to hang on his porch.   They certainly add  a lot to the area and from the looks of things he's doing absolutely fine on his own!  I also love the Wine and Grapes window hanging up in between his two new windows as well! 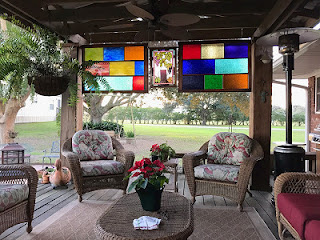 And when he's not making colorful windows for his house Roy is busy working on a Cane Window.  Although it might be considered intimidating it's already coming together in a beautiful way.  It will take a little more time than other projects he's made but i the end it will be completely worth it.  Just wait until this all fills in!

Susan R has the beads that will form the pearl necklace that this beautiful 1920's woman all picked out, skimmed, ground and wrapped.   Right now they are just resting on on the glass but next week they will be cut into place meaning that this window is almost together already.

Lara has starting a Wedding Box and got the invitation sealed in glass as well as getting the flowers cut out for the side panel.  It's been a while since we've seen a wedding box made and in the past one usually begets a second (and even possibly a third) so we'll see what happens when this is completed and new students see what a great wedding gift these can be. 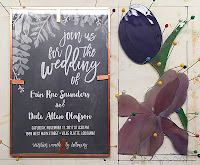 Mary Grace is about to embark on a new creation.   Her Flowing Flower Window looks wonderful and she's already cutting glass for it.  She's working one color at a time and I don't think this will be a problem for her at all.   She's considering adding a single border for some added style-- we'll see what happens as she progresses throughput the weeks.

Terry  is working on her Spiraling Flower Window again now that she has a definite size to fit it in.   With almost all of the second panel of this ground, Terry hopes to come back in with it tacked together and ready to get a border attached. 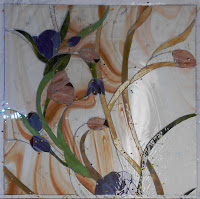 Shelley is making excellent progress on her Dragonfly and Flower Window.  She most everything but the background glass cut out for this already and I doubt if it will be long before we find her at the grinder working on getting everything to fit together.

Jeannette had already finished cutting out her Compass Rose Window but she had a lot of grinding to do.   Three hours later she had the entire window ground!  The reason she was able to grind all of this so quickly was because she took her time while cutting out her glass.   By spending and extra half hour cutting she managed to shave off hours of time grinding.   Accurate cutting is the first step to becoming more than just a beginner when it comes to making stained glass. 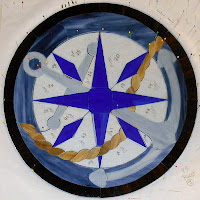 Linda L is grinding all of the letters in the final outer circular section of her Houston Astros Window.   She's also learned that letters are not as easy as you might believe.   You surely don't want sloppy handwriting and if you aren't careful when grinding, well, that's what you can easily end up. 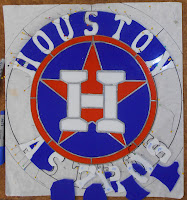 Sheri got the beads assembled and wrapped for her Poppy Window this week.   Next week she'll get the final cuts made which form all of the stems that run through the design.  Looking at the picture below you can't even tell that they aren't cut yet but perhaps we'll get a better look at them next week. 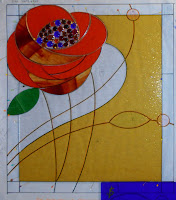 Brenda left her Hair Salon Window at home so she could work on this clear Cross Suncatcher.   Let me just say that she didn't waste any time at all on this! She finished her grinding and then even got all of her pieces wrapped.   This cross is ready to be soldered! 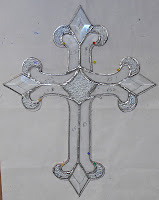 MiMi has all of the bevels cut for her Industrial Fleur De Lis and she's leaned how to double wrap the wider sections of the bevel where it's been cut so that both sides have copper foil on them.  With just a few random pieces of borders left to cut out I have a sneaking suspicion that all of the glass cutting will be completed on this by the time MiMi finishes class next week.

Linda F is just about ready to wrap her Flower Basket but as she wraps each piece she'll remove the pins from in between all of her pieces.  They are there to provide room for the foil so once the foil is applied the pins must go!   She'll be turning this detailed suncatcher into a panel by adding a background to it but that won't happen until after this is all wrapped and tacked together. 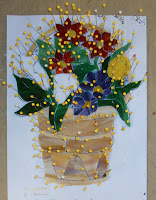 Becky S resumed work on her Egret Window by working on the bottom section which shows the Irises and leaves. She could have easily gone with brown along the bottom edge to form some ground but Becky went with an all water look instead.  With a good deal of this wrapped already, Becky will be at the finish line before you know it.

Barbara H is working on her version of the Traditional Santa Claus Window and will most likely be happy to see Mary's completed so she has something to inspire her as she works her way to the end of this festive window.  Also, she can now see what the eye's will look like painted onto the glass. 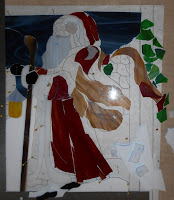 As I suspected she would, Martha was able to tack together her pair of cardinals and then get the background cut as well.   After she cut all the pieces out she ground them, wrapped them, and even tacked everything together.   That means that she's all ready to get some border glass cut when she comes back in.  Although it's hard to see the color of the glass that she picked it's running along the top edge of her window. 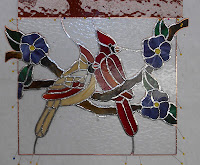 Jan is about to work on a window that should keep her busy for a while.  Although it consists of a lot of pieces, they are easy enough to cut so this will surely be a fulfilling project all around (but especially when it's completed!) 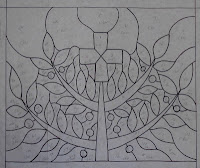 And lastly, Jeanne L is beginning a Humming Bird and Flowers Panel that she adjusted by adding a second flower to in the lower left.  With the pattern now completed and her glass all picked out, Jeanne is about to begin cutting when she comes back in. 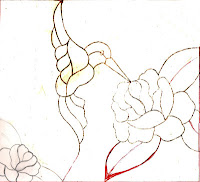