Ok, let's just dive right in here!  Jeanne L's Humming Bird Window is surely impressive and actually much smaller than you might think.   It's only 12 x 12, so the amount of detail in it is just as impressive as the overall window itself.   Small pieces are difficult to work with but Jeanne has made it look absolutely simple. 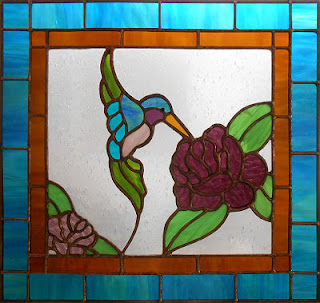 In just two short weeks Jeannette was able to complete this fantastically sporty Corvette Window!   There's no mistaking the car, and her work is meticulous.   Even though the car is an off white color I find myself humming 'Little Red Corvette' when I see this window.  Oh, and there's a joke in my head when I see it as well but we'll just let that one dangle. 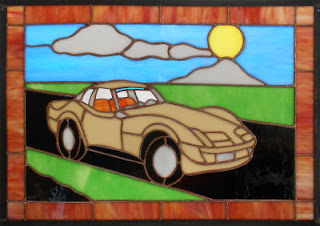 This is the first of three different Address Windows that Angie is currently working on.   The numbers will all be similar (though different of course) and the style will be the same, but the colors are a bit of a mystery to me as I have no clue if she'll go with the same color scheme or not.   I guess we'll find out in the weeks to come. 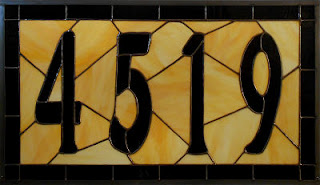 Jan put the finishing touches on her Dove Suncatcher and it's inspired me to make a few of my own (since I'll be doing a show soon).  She did wonderful work on this and the only reason it looks crooked is because I was holding it at an angle when I took the picture.  :-( 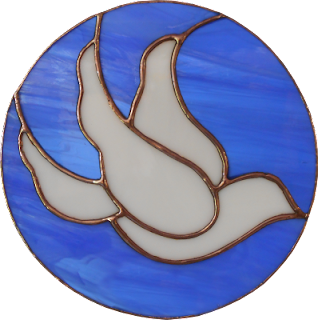 Circular Suncatchers are the rage now as Mary Grace completed this beautiful Tulip all on her own.   I think she understands now that confidence plays a big part in perfecting your stained glass skills. 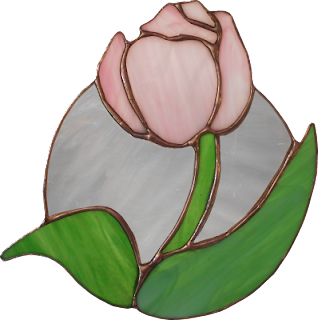 Here are two more Shepherd's Hook Panels that Rowena made.   We saw her start the Iris last week but the Spiraling Design came out of nowhere!  Rowena surely works quickly and efficiently. 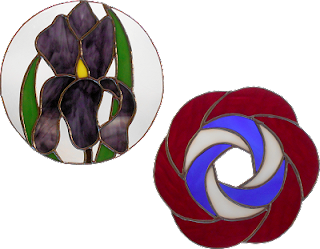 I made one of these small Dragonfly Suncatchers and passed out a lot of patterns for it but Susan R is the first person to actually make one of her own.  It may consist of only 6 pieces but the iridescent wings really set it off and make it special. 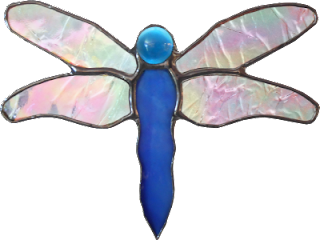 Next week we'll be seeing Tracey work on a new Cardinal Window but this week we're looking at her Butterfly Lawn Ornament which looks great indeed.  I think she liked making this as it went together quickly while not looking simplistic at all. 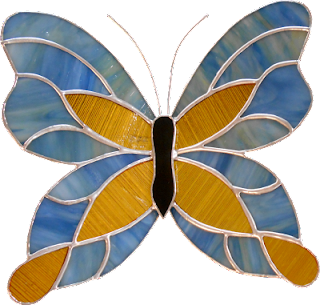 Lara has begun working on her new window and it's a grand design indeed.  This Peacock pattern has always been a favorite of mine because it allows you to go wild with colors without making the window look gaudy.  Also, it's VERY impressive when completed!

Annette is getting real close to finishing the cutting for her Pair of Cardinals Window.  There's no doubt in my mind that she'll begin grinding all of her pieces when she comes back in. 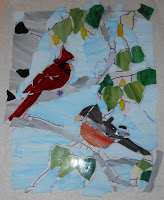 Just look at how fast Becky S's latest Egret Window is coming together.  The feathers for the actual Egret haven't been cut out yet but they've all been traced onto her white glass and will surely be cut out upon her return.

Linda F has put her Study of Rectangles off to the side so she could make this UK Window as a gift.   With the blue parts of the UK cut and ground Linda then cut strips of white glass which she is cutting to their correct length by placing them against the blue glass and then marking it.   She's making excellent time on this and before you know it she'll be back to her Rectangle Window. 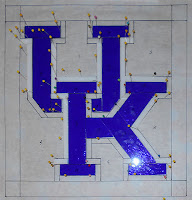 Betty has the first of her two Cabinet Door inserts all tacked together and 'channelized'!  That means that she'll be soldering this when she returns and possibly tacking together some of the second window as well.  Time will tell...

Now that Jeanne M has her pieces all ground and fitted together she's made the leap on to the foiling stage of the stained glass process.  This is coming together nicely and people are asking about the pattern which means that Jeanne's progress looks wonderful indeed!

Belinda has begun grinding her Moon/Sun Window and she's already almost at the half-way point just one night into grinding.   She's mastered the art of using an adjoining piece to shape the previous piece and that's what's making this go so quickly for her.   Grinding is actually easy once you know the secret! 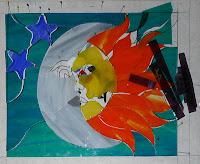 Martha's got four Crosses in the works but next week we'll see her move along to a gift that she needs to get done ASAP.   I won't tell you what it is so I guess you'll just have to read our next post to find out for yourself. 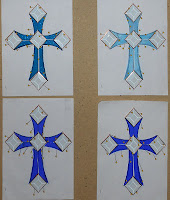 Tasha is someone else who has begun to wrap her glass pieces now that everything has been ground.   Her Buxom Wine Ladies are looking very good indeed and I wouldn't mind having a glass of wine with them myself!

Here's the 6th panel for Jeff's set of Windows.   He says that next week he'll be coloring all of them so we'll be able to see the full effect of all six windows completed.

Kerry's Crane Window is yet another project that has entered the foiling stage.    Between its stylized look and its bright, vibrant colors, it's hard not to admire this window.

Rowena also worked on a Rose and Fleur De Lis Suncatcher.  She's got them both ground and knowing Rowena we'll be looking at new items that she'll already have cut out when she returns to class. 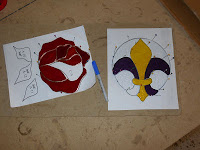 Becky B has turned her African Violet Window over and is a good way through soldering the second side.   She's on fire now and her next window will surely grab your eye indeed.   Perhaps we'll even see it in our next post. 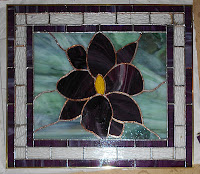 Shawn filled in her flower centers with an assortment of clear glass globs and then began soldering her window.  She's used a uniform pattern throughout the centers rather than a random effect and when we lifted her window off the table to put channel around the edges we all agreed that the centers are as stunning as the rest of the window.

Linda L's LSU Fan Lamp is all ready for solder.   She would have had it tacked together before class ended but Linda is going away on a cruise next week (along with Mary Grace)  so she didn't want her project sitting around with solder and flux on it for that length of time.   Still, this will be completed upon her return and we hope that both our girls have a great time.

Next up we take a look at Sheri's second Colorful Circular Butterfly  Window.  She's got the butterfly itself all cut out and almost completely ground already.   Once it's tacked together she'll drop it in a circle and cut out a border for it. 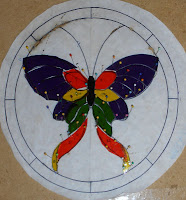 The last line of solder has been beaded on Roy's Cane Window but he's taken it home to do some touch ups here and there throughout this very impressive window.   There are a lot of thin pieces throughout this but Ray made sure that everything lined up beautifully.   I think we'll see this completed in our next post.

Melissa's wedding obligations have ended so she was able to take her Le Pieta Window home so she could work on it during the week.  Now that it's all ground you can easily see that the background is a building with columns.  Melissa was concerned about dealing with all of those straight lines but as you can see they posed no problem at all for her.

Finally we have Barbara who is about to put together her first butterfly Lawn Ornament.   NOt only is this almost finished but she has a second one well under way as well.   Yes, the body is upside down in the picture but it isn't attached- just resting there. 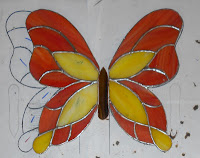 And that about wraps up all the window we saw being worked on this week!