One Of these Nights

Our tip this week is about the maintenance of your soldering iron.   It's one of the most important tools of the stained glass trade and it should be cleaned from time to time.   How you do that is something of a mystery but I'm going to  set the record straight for you here and now.   Every soldering iron accumulates a buildup at the area where the tip slides into the iron itself.  This build up should be removed from time to time but how do you do that?   All you have to do is heat your iron up, unplug it and then rotate your breaker pliers around the bottom of the tip while applying just a small amount of pressure.  You'll see the build up fall away with just one or two twists.   Also, from time to time you should brush off the tip of your iron with a brass or steel brush (a pack of these can be found in almost any hardware store for under $3.00).   Remember that the iron should be hot but unplugged while you are cleaning it.   Following these two cleaning tips will easily add years of life to your soldering iron.

Now onto our completed projects.   At almost 7 feet wide, Jeannette's Transom Window Insert is a marvel to behold in person.   The design itself was based on the framework that this window this will fit into.   Our pattern started off simple enough but when we saw just how much glass was going to be wasted we altered the design to have more cuts that repeated in a 1, 2, 3 pattern that looks great without revealing why the cuts were made.  All in all, Jeannette did WONDERFUL work on this and her soldering alone was stellar.

Angie finished off the pair of Santa Clause Windows that she has started last week and they look very festive indeed. I can't help but wonder how many more of these we'll see in the next two weeks because I've sure passed this pattern out to a lot of people.  Now that we see two of them finished I have little doubt that I'll be passing out even more of them! 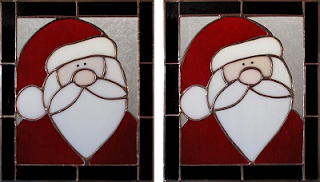 Sheri's latest Bee Suncatcher has her taking a different kind of spin on a pattern that she had found on the internet.   The original pattern called for wires to be used for the legs of the bee but we cut pieces of clear glass thus making this far more sturdier than wires would ever make it.  And you know what? The end result is just as appealing. 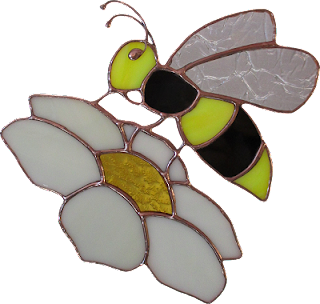 Keeping with an insect motif, Angie managed to cut out this Ladybug Flower Pot Decoration  while she was at home and then ground, wrapped, and soldered it while she was in class.   You just can't lose with a Ladybug. 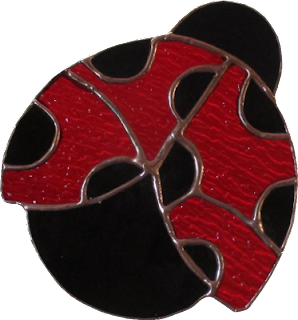 Belinda put together this simple but elegant Ornament Suncatcher while she was at home and then brought it in to get a hook put on it.   Now that she knows the secret to making and attaching hooks she may just very well become an unstoppable stained glass force! 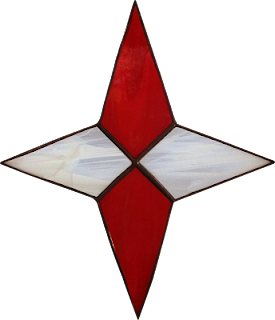 Also, the Wine Cat Windows that Belinda makes are getting done faster and faster.    She says she's looking forward to working on her Church Window next year (which is only about 3 weeks away!) but until then, she has to make what the people want and there's certainly nothing wrong with making these in bulk! 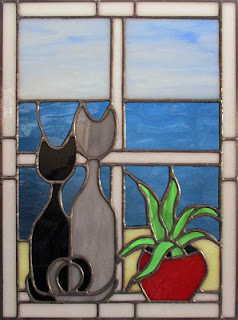 Martha worked on two Leaded Christmas Ornaments and managed to get them both completed.  Sadly, one of them didn't photograph well at all.  The one that did, however, looks incredible as you can see below. 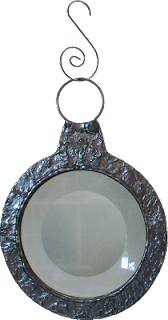 Rowena started and completed this Saints colored Fleur De Lis Suncatcher without a moment to spare this week.  Her attention to detail is readily apparent when you look at how perfectly circular and symmetrical this is as well as how evenly it hangs. 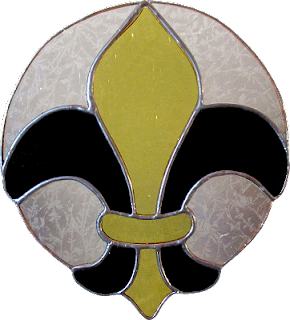 Lara wasn't sure what she was going to do when she came into class this week but after spending some time sorting through our patterns she stumbled across this somewhat Victorian Style Window that I've always loved.   It turned out beautiful the first time that it was made and I have no doubt that Lara's rendition will turn out every bit as beautiful.

Jeanne M started a new 'Suncatcher' this week which will involve wire work and some beads as well.  This pair of Cardinals is going to look very nice when it's hanging in a window and I know they'll be hanging up before Christmas comes. 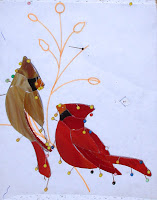 All alone at the end of the evening, Patrice worked on her Eagles Tribute Window.  Or IS it an Eagles Tribute window?   Someone said they thought it looked like a Uterus and as preposterous as that sounds, well, that's just what it is!   We might very well see this finished upon her return...

I'm loving Melissa's Peacock Window and can't wait until we get to see it completed.   This week Melissa worked on the Peacock's 'butt' by grinding the green circular pieces in the lower center of the window.   Once that's done she'll wrap them and tack them as well.   This will make grinding the pieces that fit fit up against them much easier and with more perfect fits.

Susan R's Seafood Window is being ground very precisely and that's the key to a standout window.   You take your time and do it right from the very beginning to the very end and that is just what Susan's doing.

Shawn's Sunflower And Cardinal Window is moving along a a beautiful pace.  This week we saw her cut out all of the leaves, stems and the Cardinal itself which is an impressive amount of work indeed.  She also decided how much curve to put on the letters and music  that will make up the center section of the sunflower and although I wanted to show you what that will look like we're going to have to wait one more week due to a problem with the secondary printer that is used to accomplish the printing of text on glass.  We have it under control now (I think) so expect a reveal next week.

Annette also got a lot done this week as all of her pieces were wrapped and tacked before she called it a night.  Now that it's tacked together she can get a border cut for it next week and then begin soldering which means that she'll easily finish this up in time for Christmas just as she was hoping! 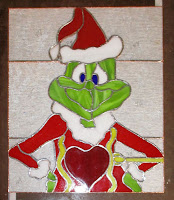 Kerry got all of his Pelican Window ground and wrapped in foil while he was in class this week.   Like Annette, he's hoping to have his window finished for Christmas and at this rate I'm pretty sure that he'll get it done in time.  For the record, this Pelican doesn't have a white neck-- Kerry was just wrapping that piece when I took the picture and what you see is the paper pattern behind the hole.

Cindy got all of her clear textured pieces cut and about 90% of her window has been ground which means that she'll have to decide what color she's going to color her lead.  That color will determine what kind of foil she uses on this piece.  Since you can see the back side of the foil through all of these clear pieces she's going to want the back adhesive side of the foil to be the same color as the lead after she colors it.

It's a Boll not a Blossom!  Even I learn new things during our classes (quite frequently, in fact) and when I previously called MiMi's window a Cotton Blossom I was wrong.  It's a Cotton Boll Window, and this week it's all been ground and the foiling process has been started. 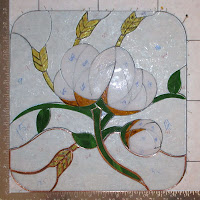 Rowena has started a small LSU Suncatcher and it's all ready for it's final soldering to complete it.  At less than 8 inches wide, it's size here on the blog still confounds a lot of our students when I print the pattern out for them.

Mary Grace was busy as she worked on 2 Crystal Hangers, a round Tulip Suncatcher, and a Holly Leaf suncatcher as well.   The last two were pretty much completed by the end of class but they weren't washed or colored yet.  Perhaps we'll see them all next week.

Susan D is making Crystal Hangers like they're going out of style.   Here are four more that she has just about finished.

Finally, Carol is about to embark upon a stained glass journey involving two of these Beveled Cross Windows.  She got the background glass for both cut out during class, but she didn't place the pieces on the pattern, hence the barren picture.  So head back to camp, I have nothing for ya.  :-) 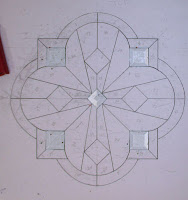