Aspect ratio.  Sometimes it's hard to understand but in its simplest terms it's all about an image retaining it's composition when it is resized.  Let's start with the fish pattern below where it's easy to see that the image is wider than it is tall.   When redrawing this pattern to fit a different size it will only maintain its aspect ratio if the finished size scales either up or down closely to what the original pattern started as. 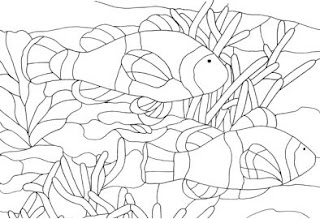 Here's the same pattern when it's scaled to twice as high as it is wide.  Do you see all of that empty white space above and below the fish?   That undefined area is a result of the image not being able to be scaled entirely to the new size.  This is what happens when you try to put a pattern that is wider than it is taller into a space that is taller than it is wider.  The same occurs if you try to resize it in the other direction but in that case the large white areas would be on the sides rather than the top and bottom. 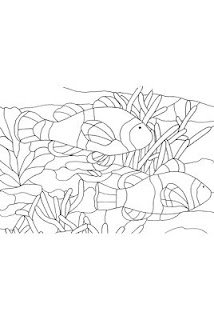 If we were to make the original image fit the new size exactly then everything in the pattern would lose its height and width ratio thus stretching it out of shape like below.  Now the fish aren't long-- they're kind of square! 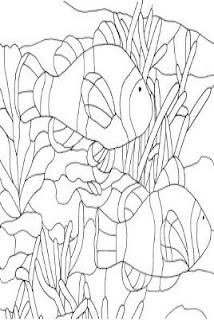 Without redrawing new scenery for the top and the bottom of the image, the only way to make it fit our new dimensions and make it look un-stretched is to cut out some of the pattern on both sides as follows.   Sadly, we lose a lot of what made the window look so good in the first place if we do that. 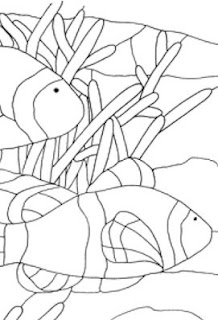 So when you are choosing a pattern that has to fit a certain size be sure that the pattern matches in terms of length and width otherwise you'll be changing the overall design of the pattern in a big way.  We crop things almost every day in life because aspect rations don't always line up with what we have available to us.

Now I must say that I knew that the colors of Lara's Victorian Design Window would set this project off spectacularly but when it was lit up even I was surprised at just how vibrant this window is without being overpowering.  There are plenty of times when bright colors translates to too much, but not in this case at all!  I've seen this window made twice and I've been impressed both times.

Shawn's Sunflower was completed this week although and although she wasn't able to get it colored before she left class, I did that for her the next day.   I just couldn't wait to see what this looked like with some light behind it!  And my verdict is that this is something that she should really be proud of.  Firing the sheet music for 'Here Comes the Sun' onto the glass really makes this window special along with the initials in the bottom corner.   In case I haven't mentioned it before this is a tribute window and all of the pieces of the subject matter represent a life.  This will surely touch more than a few hearts when Shawn delivers it. 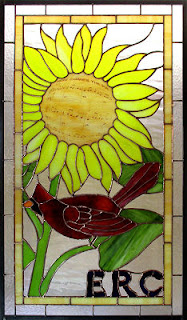 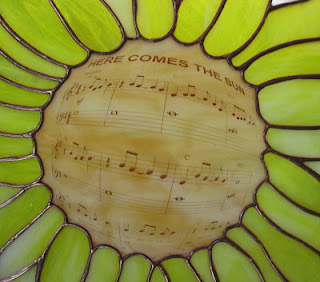 We have a new Cross Suncatcher to unveil this week and although I don't know where Carol found the inspiration for the design I'm pretty sure that other people are going to want to make this.   It's fancy without being overwhelming and the colors that Carol picked for it accentuates the design perfectly. 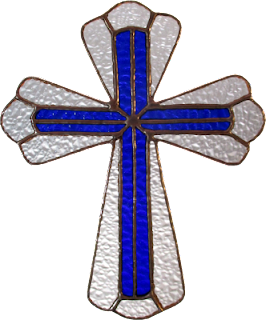 Lisa made her Butterfly Suncatcher last week and when she came in this week she was eager to start work on a 'real' window.  She's chosen an Owl and all I can say is that I'm thoroughly impressed with her glass cutting abilities!  After tracing out her pattern onto poster board and cutting it into its individual pieces Lisa then began tracing those patterns onto her glass and then cutting the glass itsilf.   She's texted me a few times during the week so I know that she's working quickly on this.  I can't wait to see how much she has cut out when she comes back in! 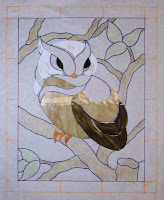 Belinda now has all of the glass cut out for her church window and after getting the first clear border cut, ground, and tacked into place she moved along to the final green outer border.   Once that's wrapped she can attach it and then begin soldering this window!

Cindy's been busy cutting and grinding two Rooster Suncatchers and all I can say is that the glass that she's going to be using on this will be spectacular.   I never worry too much about my glass choices but sometimes you see a certain piece of glass and just know that it's just perfect for what you have in mind. 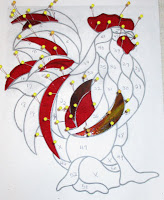 Now here's a complex project that's really coming together quickly.   Linda F's Underwater scene is not only all cut out but more than halfway ground as well!  I thought that this might take her some time to finish but I was obviously wrong on that count.  This is looking good, without a doubt. 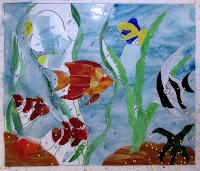 With the center of her Coffee Cup Window all tacked together Angie was able to cut out a border and get it almost entirely tacked before calling it a day.   She wastes no time at all and there's proof of that in the picture itself because that missing piece of border that you see on the right side was in Angie's hand getting foiled when I took the picture.  She was intent on getting this done!

Next up we have one of two different renditions of our ever popular Stylized Fleur De Lis window.  the first one here is being made by Betty and she's all ready to begin grinding this window. 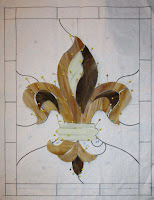 This second Fleur De Lis Window is being made by Rowena who got hers all tacked together and then 'borderized'.  I have a sneaking suspicion that this will be finished when we next see it again. 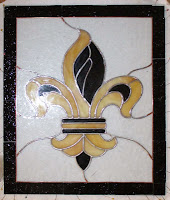 There are only a few pieces of background left to go in Susan R's Seafood Window before she can start soldering this.   It's been a long haul but windows that are this complex don't come together very quickly.  Still, the end is in sight now and I know that Susan's painstaking attention to detail is going to pay off in spades in the end.

Tracey worked on this new Nativity Scene Window at home for the most part but this week she brought it in to get two borders attached.   With her son's wedding having occurred over the weekend I doubt that she'll have time to work on it before her next class but it's still very to close to completion already. 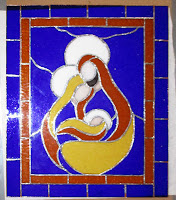 Jeanne M had to deal with a migraine while she was in class but that didn't stop her from getting all of her large Easter Window cut out and ready for some work at the grinder.   For the record, I'm going to try to talk her into a double border on this because the clear background that she's used will really look great with two borders.

Annette was busy soldering her Max the Dog window and I think that there's a distinct chance that this will be among our completed windows when we return next week.   I can't wait to see this all washed up with some light behind it because as cute as it looks now, well, it's just going to look even better after a bath! 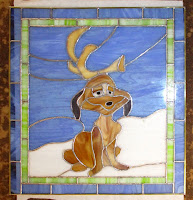 Kerry finished grinding the last few pieces of his Deer Window and then even managed to get it all wrapped before he called it a night.  This will easily be tacked and bordered when Kerry comes back in. 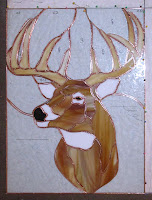 Susan D 's Dog Window is certainly taking shape quickly.   In previous pictures all of the fur that makes up Ali the dog wasn't yet ground while this week's  picture shows only glass that HAS been ground.   As you can see, there's not much left to go! 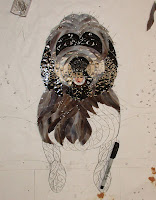 Melissa's Peacock Window is sweeping around in a circular motion and she's just about ready to complete the grinding phase of her design--  Well, the tough grinding at any rate.   There is actually a lot of cutting left to go on this window but once this is ground the rest of the cutting will go quickly.   We'll go further in depth about what will transpire to this window in about two weeks or so. 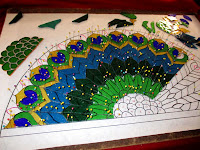 MiMi's Leaf Suncatcher is now officially ready to be tacked together and soldered which means that this will be completed when she returns-- without a doubt!   I just hope that it doesn't fold in half... 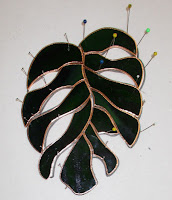 And there you have have it.   Everything that was fit to print from our shop during the 3rd week of February.