I Think I'm in Trouble

Belinda's Woman in a Bathtub Window is surely stunning.  Everything from the blue drapes which match the blue tile flooring to the iridised bubbles makes this window an exercise in perfection.  Belinda will next be working on an oval Iris Window and also a circular version of Birds On A Wire as well! 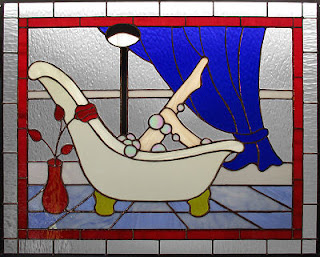 This fashionable Woman was made by Jeannette over the course of one week and if you want to talk about a stylish window, then this is it.  The nose and lips were painted on the glass to give it a little more detail but in all honesty if they weren't there it wouldn't affect the overall feel of this window. 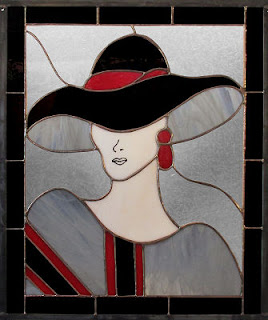 Trouble the Cat is ready for hanging and Susan D did another wonderful job not only working on the window itself but designing it as well.  When it comes to stained glass Susan is branching out in wonderful ways. 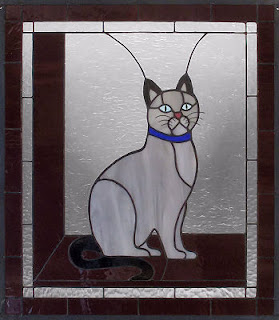 Lara made this new Feather Suncatcher utilizing nothing but clear scrap glass.  For a bit of a 'kicker' she interspersed some iridescent glass as well and ended up with a beautiful suncatcher.

Linda F completed another multicolored Owl and like her first one, this is also wonderfully inventive. She literally flew through the construction of this and managed to use a lot of scrap glass in the process all the while learning that color placement, in something 'random' like this, really don't make or break the project. 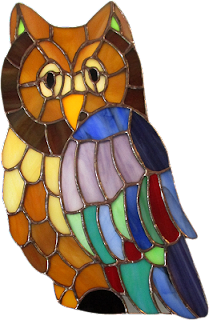 Next up are four babies, two boys and two girls, that our other Linda completed this week.   Her work is so precise that the two pairs are identical so I only pictured two of them but rest assured that they look identical. 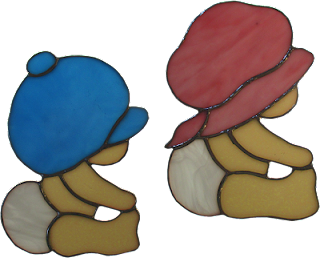 Pairs are the way to go as you see here.   MiMi made two more Bird Suncatchers and it's always a testament to the artist when they can create essentially indistinguishable copies of a project, and that's just what MiMi did. 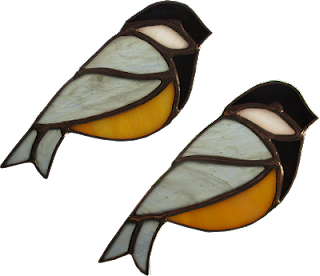 And we end our finished projects with a similar but not identical pair of suncatchers that Betty made this week.  First she has Mary, Joseph and the baby Jesus and then she has just Mary and Jesus.  The thing is, these don't need any identification as they speak for themselves. 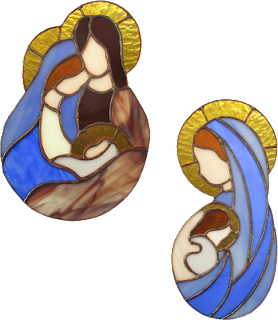 Annette was back in action this week and she completed the grinding process of her Cross/Dove Window.  Before class was over with she managed to get quite few pieces wrapped as well.   This window is almost done! 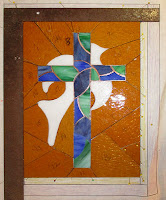 Angie got the background cut out for her Peacock Window and then got the two borders and a channel attached as well.  That's what I call progress!  Expect to see this completed when we return.

Linda L also worked on a Butterfly Window this week and although it's hard to see, those pins can should tell you that all of the background glass has been cut as well.  The grey that she used for her background blends into the paper pattern but it's there and fitting together nicely. 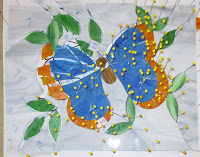 Lara, after completing her feather, also traced out and cut the leaves for her new Flower Window.  This is window two of a set of three and as you can see this one will go VERY quickly for her.

Shawn decided to add one more border to her Address Window and the end result is spectacular.   Surrounding the bevels with the same red that she used for the numbers really framed this out nicely.   There's a good chance she could finish this upon her return.

With her border now attached Cindy has officially finished cutting and grinding her Sunrise Window.  She's all ready to solder this now and that won't take her long at all. I really love the look of this very tall window.

Linda L also began cutting out 4 Bird suncatchers while she was in and she's moving along at a break neck pace as you can see for yourself.   These will be completed before you know it.

Mary Grace began work on a Votive which means that her four sides will need be be assembled in a jig for them to fit together to form a 3D candle holder.  She has all four sides cut out and two of them ground as well.  there's a very good chance that she'll be wrapping these when she comes back in. 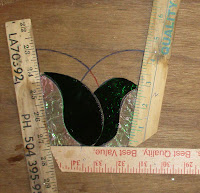 Shelly's Titus Inspired Woman is really taking shape already.  She forgot the glass she wanted to use for the sunglasses at home so she spent her class time grinding what she could.  It's really coming together quickly and it's fitting together wonderfully as well!

Tracey got her border cut and ground for her Sunflower Panel and then she went to work on wrapping all of her pieces.   Normally we tack the center of the window together before cutting the border but this isn't the case if you have rounded corners because the borders can't be cut on a strip cutter. 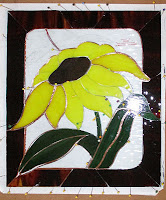 Martha's Franklin, LA Street Lamp Window got its final border cut and even though it isn't finished yet it's been sold already!   Martha's so happy about it that she's going to maker a second similar window but the next one will be made in shades of blue rather than green. 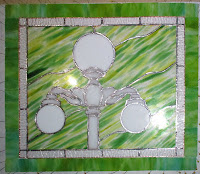 Kerry tacked together the top Tiger Face section of his LSU Window and then cut and ground the letters for the bottom portion of this window as well.  Not bad at all. 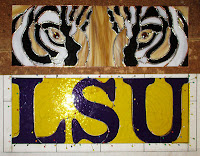 Jeannette started and completely cut out another Bee Suncatcher but this one will be using clear glass globs for the Bee's eyes.  These are so nice I'm going to have to make a few for my next show. 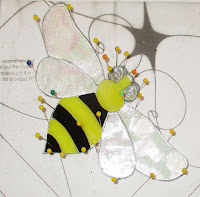 With all her glass attached Susan R has begun the arduous task of soldering this massive window.  As I always say, 'slow and steady wins the race' and when it comes to soldering you just can't rush things or it looks terrible.  We don't have to worry about that with Susan though because she always does a good job with a soldering iron.

Lastly we look at the pattern for the Angel that Roxane has begun working on this week.   As she cut out all of her pattern pieces we kept hearing people saying, "That's a LOT of tiny pieces in that  Angel".   Although that's true I have no doubt that Roxane can handle this with ease.

And that's what happened in our classes during the first week of June.  Attendance is really picking up with just Thursday morning lacking in attendance.  All things in time though! Hopefully we'll see some Thursday morning faces in the week to come.