It's a Dumpster Fire

Lead lines are a very important part of making stained glass.  They provide us with a way to make complex cuts much easier.     Below is a window that I found on the internet.   You'll note that any time any part of the flower forms a point there is a lead line running from that point to the outside edge of the background glass.  The thing is, not all of those lines are necessary.  Also, by making those lead lines run straight  the look jarring and detract from the rose itself.  Simply curving those lines will soften the look of this window dramatically. 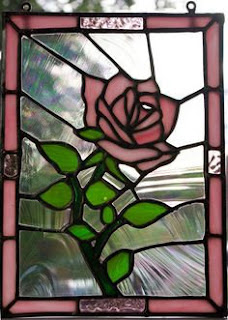 Now here's my modified idea of the same basic pattern.  First I removed two of the top lead lines that previously ran to the top of the window.  Although the petals have points there they are very soft points that honestly don't need lines running from them.  To 'fix' the other lines I simply curved them so that they flow with, rather than fracture, the background glass.  Scroll back and forth between the two images and I think you'll see that the bottom one is a far more graceful window.  Next week I'm going to curve the flower itself to show you just how important curves are. 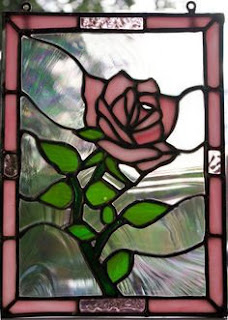 With that out of the way we now turn to Martha who put a zinc channel around her Pelican window, washed it, patina'ed it,  washed it again and then waxed it.  Yep, that means that she has completed her window.  She believes that it took her forever to make but I disagree.   She worked with great precision at a perfect rate of speed leaving her with a window that she can be proud of. 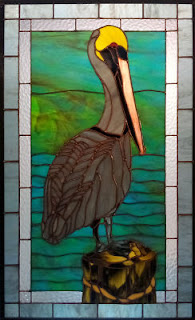 Linda L  has three more Beveled Diamond Suncatchers completed and you can even see that one of them has a chemically etched initial in the center of the bevel.  I think that this may be the first time we've seen a student work with etching cream, but it may not be the last time... 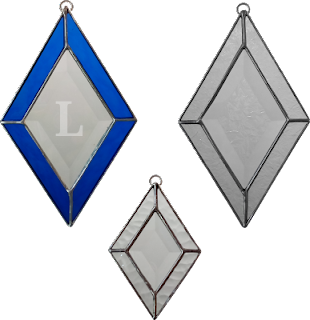 Here are Susan D's latest Beveled Christmas Ornaments.  Susan trimmed the two of these using gold Van Gogh glass which is actually a sheet of glue chip glass with a gold backing applied.   It's application in these ornaments is pure perfection! 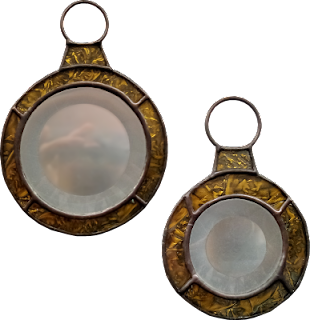 Angie finished soldering her latest Address Window and I know it will surely be appreciated.   I love the background that she picked--  That white with just a hint of blue running throughout it works in tandem with the dark blue border wonderfully. 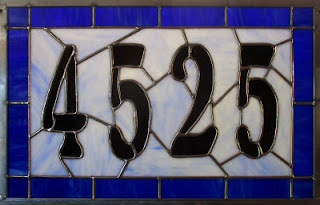 Judy started her first 'real' window with us and for that project she decided to make a Cardinal.  In just one night she managed to get the entire window cut out which means that next week she'll find herself working at the grinder making sure that every piece fits together flawlessly. 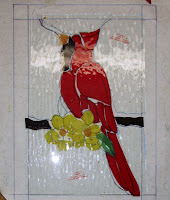 Bee finished cutting and grinding the remaining pieces of her somewhat avant-garde Flower Window which means that this is ready for a border.   She has the strips cut out already (you can see one of them to the right of the window and the entire sheet of border glass above it).  Bee hopes to get her border attached while at home and then solder it before she comes back. 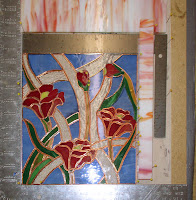 Betty has begun work on a large Transom Window which will be her first piece for hire.   It's a good three feet wide but the pattern repeats which means that she'll be making all of the accent sections and then, after they've been cut, ground, and tacked she'll trace them onto the background pieces.   Working this way will make the creation of this window go quickly and efficiently.

Rowena is making a LOVE Panel and in the span of just one class she managed to get the pattern drawn and traced out, then the glass cut and partially ground.   She's a quick worker who just LOVES her work. 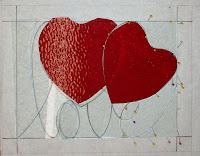 Susan R's  Flower Teapot was ground while she was in class and now she's wrapping her pieces in copper foil   This is going to be the centerpiece for a window so we'll most likely see a background cut around this Teapot when Susan comes back in. 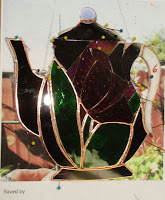 After completing the Pelican Window that we saw at the top of this post Martha then began working on a Sunflower Heart which, as you can see, she's already begun to grind.  Looking good! 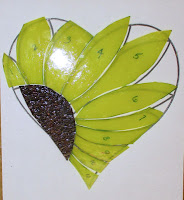 Sheri got all of the background wrapped for her Koi Fish Window  after which  she then moved on to tacking it all together.   There are four or five pieces that didn't fit as perfectly as she would like so she left them open so  she could place a piece of glass behind her tacked window and then trace around the inside of the opening to make a perfect replacement piece.  However, before she does that she'll need to add a border to make sure that her window is nice and sturdy before she starts lifting it to slide glass underneath it.

Cheryl's Lighthouse Window got its double borders attached  which means that this is all set for solder.   She really hopes to be able to finish this project next week (it's a gift) so she's taken it home to get a head start on the soldering.  Time will tell what will happen but I have a good feeling about this being finished for a very timely unwrapping. 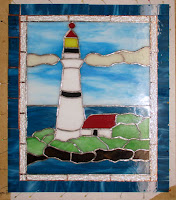 With all of her pieces ground and fitting together wonderfully, Ann began wrapping her Cross.   She only has the center circular section left to go and then she'll tack this together and work on getting her clear textured background glass cut.  After that she only has a few border pieces to work on and that won't take any time at all. 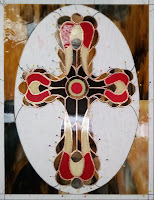 Mary Grace finished grinding her Angel Suncatcher and then set upon foiling all those carefully ground pieces.   At the end of the day she had the task completed and is now ready to solder this beautiful, delicate suncatcher. 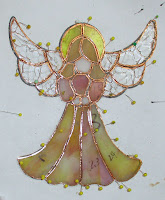 Barbara H came in and cut out the background for her small Tulips Panel, ground those pieces, wrapped them and then tacked it all together so she could get a border attached as well.   By the time she left for home she was ready to solder this small but stunning stained glass vista which we'll see completed upon her return. 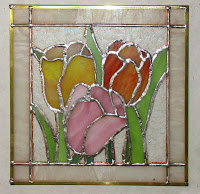 Cindy has four of her stained glass feathers all ready to be soldered with another three ready to be wrapped.  I won't be surprised to see these amongst our completed projects in our next post.  Cindy wastes no time at all when she has a soldering iron in her hand. 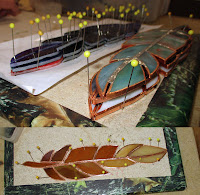 Kerry got the border cut out and attached on his Nicholls Dog Window and even got the front side soldered as well.   What you see below is the back side of the window and you can see that he's already begun soldering that side as well.   This will almost surely be completed when he comes back in.

MiMi, the work horse that she is, has begun grinding all the hexagon pieces for her third Cabinet Insert Panel.  She says that at this point in time it isn't really going much faster (she picked up extra speed on the second panel that she made) but that it is far less stressful and much easier for her to manage all of these hexagon pieces now.

Lisa came in the with bottom 2021 section of her United States Coast Guard Window all put together and tacked into place.   She had also brought in a wooden frame that she wants to mount her window into so we measured out what size the finished window needed to be and then figured out the sizes for  a double border to surround the glass.   By the time she walked out of class she had her window ready for its final coat of solder. 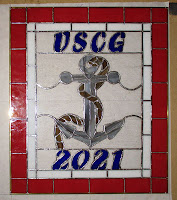 Lastly, Susan D also worked on a slew of Swirling Christmas Trees while she was in class.   At this point they are all set to be soldered and 'wire worked'.  It may look like the majority of the work has been done on these but tinning and twisting all of the wires that finish off these trees takes more time than you'd believe.

So there you have it!
Paul