My Heart Is Broken

Lead lines that make cuts possible are always distracting.  Wher there's a point we have to draw a line coming out from it to make other cuts possible.  We've covered how to disguise and minimize them in recent previous posts but to reiterate briefly I'm going to show you the double sunflower pattern that you see on the left in the image below.  The background glass between each sunflower is not something that anyone would want to cut. I've separated the shape and placed it in between the problem pattern and the workaround pattern so you can see how difficult it would be to cut.  You could use a glass saw to achieve it but each of those points are weak spots that could easily break each time we cut out the next point.  The 'solution' is to add lead lines coming from each point which you can see in red in the image to the right.

Those lines fix the problem but it's FAR from elegant.  In my opinion, the pattern isn't worth making with all of those distracting lead lines because they ruin the flow of the design.  Alas, these are the limitations anyone faces when drawing stained glass patterns.  Sometimes however, you can work your way around those limitations with some fancy thinking as you'll see a little later on below.  Keep reading.

Wow, Mary's Holy Ghost Window is finished and it's another big feather in her stained glass cap (did you catch what I did there?)  That triple border withe the black background really provides a ton of contrast for the circles and diamonds to shine out from inside of and it helps justify the black zinc border that surrounds the entire window.  The colors she picked have such great contrast.  I have to say that Mary did great work on this all around (I'm on a roll here.) 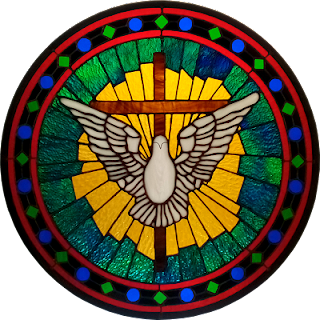 After cleaning up her solder Sheri added some zinc channel to her Koi Fish Window and then spent most of her class washing, coloring with patina, and waxing her finished window.  Her work is spot on all throughout this project and she never rushed it just to be able to finish and move on to something new.  Lovely indeed and very calming to look at, this was a labor of love that Sheri can be very proud of. 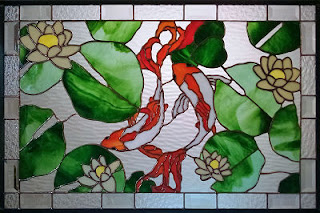 Cindy's Large Butterfly is a stunning piece of work.  This is filled with plenty of small pieces which Cindy created in record time.  The icing on the cake is the inclusion of numerous small glass globs that trail from top to bottom near the edge of the wings.  Stunning. 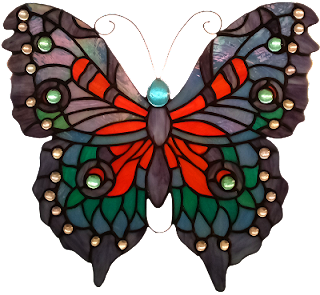 Lisa completed her Monogram 'V' Window and allow me to say that this window should be held as a votive, not in vain, for the value and veracity of beauty that vindicates all vigilant and the virtuous artists. Verily, this vichyssoise of verbiage veers most verbose, so let me simply state that it is Very stunning! 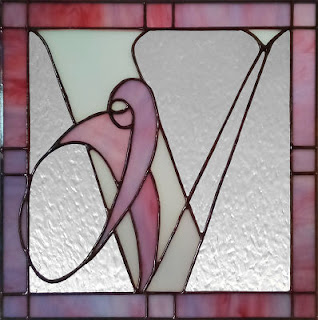 Now, back to what we started at the beginning of this post.  Betty  finished up the first of our 'hoop projects' when she completed the Double Sunflower.   What's the point of having the project in a hoop?  Well,  it provides a strong  edge that won't bend (unlike channel) that allows you to make a window without using any background glass.   That means that each of those red lead lines that we added to the pattern can be avoided because there is no glass between these sunflowers which are held 'together' by being soldered onto a sturdy metal hoop that runs around the entirety of the piece.  Problem solved! 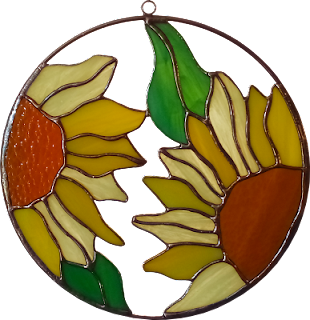 Susan R's newest stained glass 3 dimensional bird  is all finished and ready to be positioned anywhere she wants to put it.  These are cute little ornaments that really help decorate any flower pot. 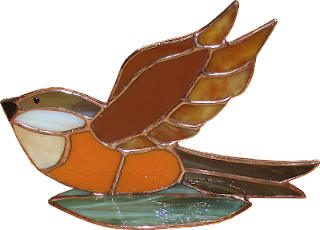 Jodie is our newest student and that means that we have a Butterfly Suncatcher to show off.  Jodie caught on extremely quickly and if I'm not mistaken she never broke a single piece of glass  even during the part where she learned how to use a glass cutter.   She's going to start a standard size window next week and after that I think she'll be ready to begin working on some windows that match other windows that are in her house. 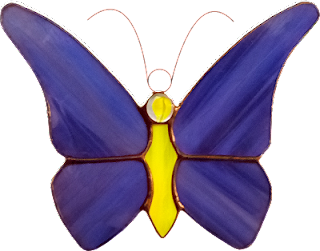 These two Sunflower Hearts were made by Rowena and Angie.  Angie's was done with a dark blue sky while Rowena went with a softer powder blue sky on hers.  Both look great though! 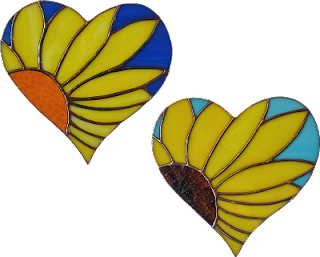 Annette finished up her latest Faux 3D Cross and another hanging Butterfly as well but I really dropped the ball on getting a picture of that.  The problem was that the butterfly was moving back and forth and all three pictures were so blurry that I just tossed them out.  But look at this gorgeous Cross! 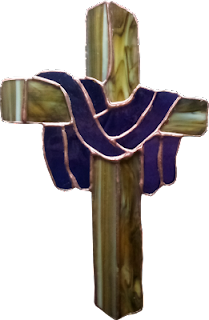 Here's a much better look at the Transom Window that Betty made a few weeks back.   Windows take on a whole new appearance once they're installed and since this picture was made available to me I thought I'd pass it along for all of you to see. 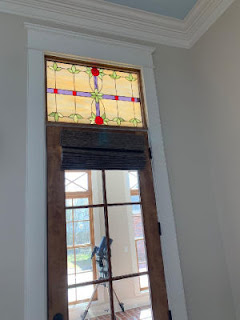 Mary also began working on a project that we'll have to come up with a name for.  She fell in love with a picture that she found on the internet but I modified it considerably to make sure that it just doesn't fall apart the minute after you hang it (as the original picture this was inspired by will surely do).  You can see that it's a Heart but what you don't see yet are the wires that will attach and entwine with it.  It sounds odd and it's hard to explain, let alone imagine, but we'll show you what that involves when she gets to it. 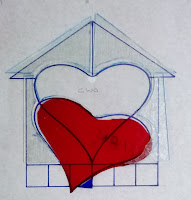 Sheri also began working on a Ladybug Suncatcher which has me wondering just how to do the legs on this sweet looking piece.  I know that we'll work it out somehow so don't worry too much about this minor conundrum.

Angie also began working on a beveled bird in a tree.   She could have simply soldered the bevel cluster together, put a hook on it and called it complete but Angie has decided to turn it into a small window by adding a branch under the bird and then some background glass and a border.  This was one of those rare cases where the background glass was cut by placing the subject (the bird) on top of a solid piece of glass the exact size of the background and then tracing around it and cutting on those lines.  You can't use this technique often but when you can it's a big time saver.

Susan D Began cutting out a Winter Panel for a stand that currently has nothing in it.  By the end of her class she had a great majority of this complex window cut out!    Maybe that's because I wasn't heckling her as much as I normally do...

Jeannette is hard at work on her latest Heron Window and by the time she left class she had all of her glass cut.   Will she be grinding next week?  There's a very distinct possibility of that but Jeannette has a reputation for getting a lot of work done while she's at home so I'm not making any predictions as to what might be accomplished between the time this window walked out shop and its coming back in next week. 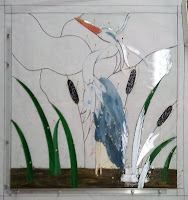 Shawn was in between projects and decided to take it easy and just talk the night away before starting a window next week but at the end of class I couldn't help but notice that she had a cute little flower suncatcher all cut out in front of her.  Nicely done! 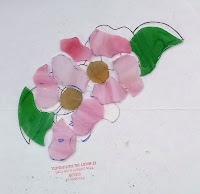 Kerry wrapped all of his background glass and then began soldering his Hummingbird Window.  With both the front and the back completed all he needs to do is attach some channel and then wash this up and hang it up! 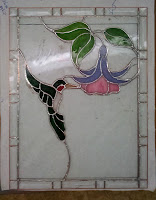 Cheryl's Mr. Bingle is teaching her so much.  She's really got the art of grinding down pretty well now and she even said to me that although the striped mittens scared her, they ended up being not that hard to fit together.  They say that experience is the best teacher and Cheryl is proof of that.  Also, I did actually remember to put a dollar bill on this window to help people see the scale of this project.  It's huge! 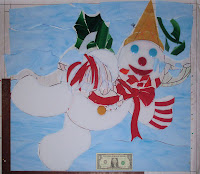 Lisa started and completely ground this cute little Mallard Suncatcher while she was in class.  When there were just fifteen minutes left to go before class ended Lisa said that she was going to wrap it at home but I said, "come on, I'll help and we'll have it wrapped before you leave."  As you can see, it's all ready for solder and Lisa doesn't have to wrap glass all alone while she's at home.  Friends that foil together stay together, right? 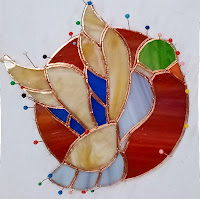 Melissa is hard at work on a new project which involves a pair of Cardinals residing in a circular window.  The background glass is really going to be the thing people talk about and you can see just a sliver of it in the picture to the left of the pattern if you look really, REALLY hard! 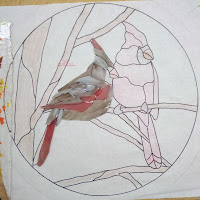 Linda L is very nearly finished with her latest American Flag and Eagle Panel.   She came in needing only to cut, grind and wrap the blue glass behind the stars and by the time class was finished she had that handled and the entire front side of her window soldered.   Linda is considering working on a panel lamp after this is finished and if all goes well that will happen next week. 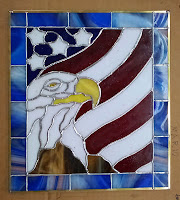 Rowena 's just about finished with her Easter Panel as she only has the back side left to solder.   This has undergone a few changes throughout its construction with the latest change being that the bow has changed color from red to pink.   The pastel color change was a good move in my book and now this window really says Happy Easter!

Tracey's got the bulk of her Circular Cardinal Window soldered with just a bit more to go on the back side.  I'm thinking that this will EASILY be completed upon her return.   Even resting on the table with no back lighting at all this looks great. 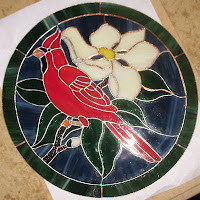 Judy is so very close to finishing the grinding on her Justice Scales Window that it isn't even funny.   Let's face it, with only about six pieces left to grind I'm positive that Judy will start foiling all of these pieces at some point during her next class. 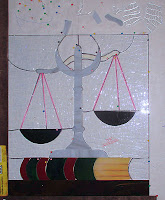 Ann began soldering her Cross widow and by the time she left she was nearly finished soldering both sides!  She's a soldering machine and this window is going to be spectacular when you see it hanging up. 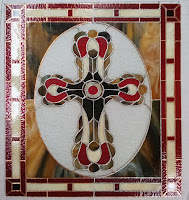 MiMi is working on hexagons, and hexagons and even more hexagons.  She's a grinding fool for sure. 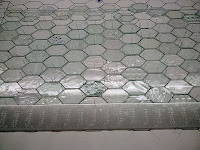 Lara used a glass saw to cut a perfect skyline so that there would be no breaks in her wispy blue sky.  Once that was attached she worked on choosing and cutting out  her border.  She picked graffiti glass which seems to be a favorite of hers (and mine) and before the night was over with she had all of her glass attached and her window ready to be soldered.