Is That A Dollop Of Whipped Cream?

Get ready for a BIG, big tip.  As soon as you open a new roll of foil be sure to take out your marker and write the size of the foil on the center core.   If it's black or silver backed foil note that on the core as well.  If you use your foil outside of your own glass workshop (such as here in our shop) then also include your name.  It's a huge time saver and your name ensures that even if you forget your foil in class that you'll end up getting it back.   Your name should also go on all of your tools as well.  One quick glance tells me that this roll of foil is 3/16 black backed foil and it belongs to the shop.   That's surely easier than borrowing other rolls of foil and trying to match their size against your unmarked foil, isn't it?

Shelley put the whiskers, eyes and mouths on her Squared Cats Window and called it a day!  Actually, she finished soldering it and cleaning  it so that I could take a picture of her cats but they didn't have the eyes or mouths on them when she left because she was going to do that at home.   What you see below is me photoshopping eyes and mouths onto her windows.  I was going to post it without them but they looked so soulless that I had to do something! 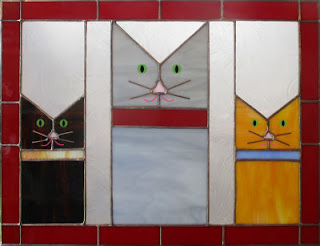 Lara's Flower Hair Band is incredible mainly due to the delightful colors that she used.  She made quick work of this and once again her unique pattern attracted a lot of attention in our other classes.  Looking at the finished piece it's easy to say that it's no wonder people are asking about it! 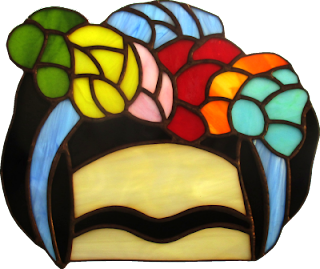 Cindy's Bubbling Champaign Glass  is another magical piece.  I'm rushing through getting this post done on time so I didn't go into detail about how this was so easily cut out but that will happen next week for sure.   Meanwhile, let's make have a toast to Cindy's wonderful window!

Sheri's Green Bay Packers Helmet was completed this week and the end result is perfection.   I have to say that her soldering is incredible even though it's hard to see on this piece. Sheri also plans to print the number 13 on the black ear piece of the helmet with a paint pen when she gets home to help personalize this for her customer.  Go Green Bay! 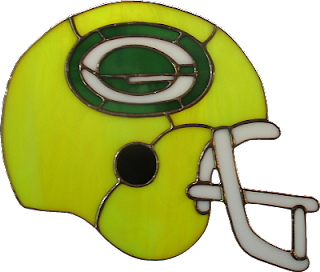 Number 6 is officially out the door.  Or should I say IN the door???  Here's MiMi's latest window as we saw it in the shop.

And here's MiMi's insert mounted into place with its 5 brothers and sisters.  She has more than a few more of these to make but from here on out the inserts will be much narrower than the ones you see here.   MiMi did what I always do-- she did the toughest pieces first.  That makes it easier and easier to see the light at the end of the tunnel! 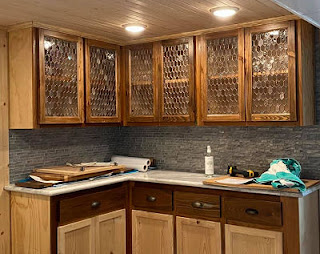 Ann completed the cross that she began last week and you can see how she arranged the pattern pieces on her sheet of glass to that each arm of the cross contains only one dark piece (as well as the center).  Many people just place their pattern pieces however chance lands them on the glass but you can make things look much better with planned glass placement, as Ann proves here. 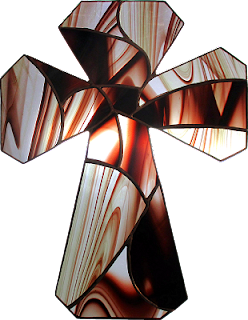 Susan D has two more Angles finished and the gold one was made with Van Gogh Glass.   The picture actually came out very clearly and shows you exactly what Van Gogh glass is--  Glue Chip glass with a colored mirror backing.  Perfect for an Angel, don't you think? 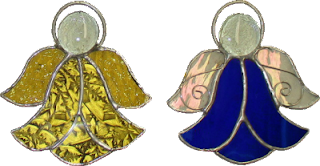 Barbara H started a small Cardinal Panel and to do that she'll cut, grind, wrap and tack together the cardinal (and the leaves) before cutting any background glass.  As you can see, she's well on her way to completing the first step in the creation of this panel.

Cheryl has a wedding Invitation box to make and she's starting her series of boxes with a nice simple yet elegant design that frames the invitation with two different borders.   She's got the top of the box completed which means that the bottom will be done as soon as she comes back. 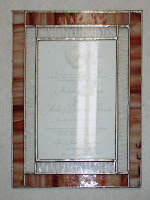 Cindy has begun working on a large stack of books which will end up becoming a large suncatcher. She's making this one book at a time using mostly scrap glass and I think it's the perfect way to handle this many multi colored piece.

Last year Shawn made a Christmas Ornament Window  and this year she's making the ornaments that were found in her window as separate suncatchers.  Ann is also planning on making some of these and Martha also expressed an interest which is why I already had the ornaments scanned as individual pattern sets.  Shawn, though, is the first to start these.

Christmas has very much been rung in here at our shop and Annette has also decided to start making Holiday Suncatchers.  She's begun working on a Mary And Child suncatcher and she's already set to begin grinding her first one.

I only have two words to say about Martha's latest project:  Build Life.   Why?  Because those are the two words that are the only things left that Martha needs to cut out.  She started with the word YOUR this week and by the end of class she's pretty much decided that cutting out letters is for the birds (so to speak). 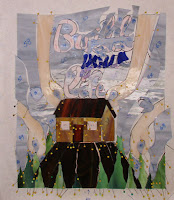 Jan got her Eagle and Flag tacked together and then she filled in four missing pieces before adding her first (and final) border.   This is the last of the Blue Baroque that we're likely to see.  Barbara has been holding onto a small piece since Spectrum went out of business a few years back. Jan asked us if we could get her a sheet of it and when we told her that it was no longer made Barbara graciously gave Jan enough to do her border. 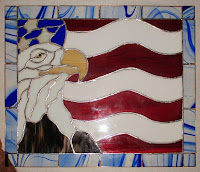 It does NOT take Tracey long to cut and grind a window.   She had about a quarter of this ground when she walked in the door and just three hours later the rest of it was ground as well.  Her window is now ready to be wrapped in copper foil.  This Magnolia design is always a winner but I think it gets better and better with each one that we see made. 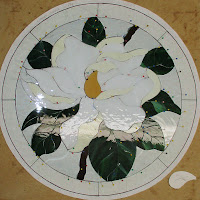 Everything has been cut, ground and wrapped for Mary's Dueling Humming Birds Suncatcher and when she comes back in she'll begin soldering.  There's actually a chance that this could be finished next week and I'm just about dying to see this with some light behind it because I already think that it looks incredible!

Judy M got the elaborate border of her Cardinal Window ground and tacked together which means that she'll begin soldering this when we see her next.  Everything has come together nicely for this and once the channel is attached the edges will become perfectly straight again.   That's the beauty of using channel and NOT using a square to line things up.  It allows any flaws to be hidden by the channel. (Not that this has  any flaws!) 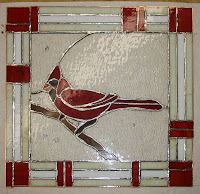 Kerry's Witch is another window that is  so very close to being completed.   In this class Kerry got both the front and back sides soldered as well as getting a channel attached.   With the back side soldering looking perfect the front side only needs to be gone over and smoothed out before Kerry can call this a completed window.  Expect to see this finished when we return with our next post. 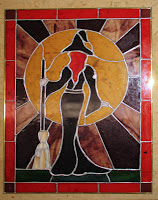 Melissa is getting closer and closer to finishing her Butterfly and Iris Window.   I have a sneaking suspicion that she'll get her two borders attached next week and after that, well, let's just say that soldering is all down hill for Melissa! 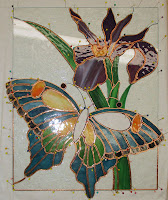 As I said, Christmas is in the air here in our classes!  Or should I say that the threat of Christmas fast approaching is making our students panic to start working on their Christmas Stained Glass Wish List!  Susan D has four more Ornaments started but these will be done purely in glass rather than lead coated glass.   A little color can be a good thing indeed. 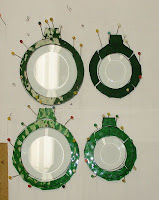 And there you have it.  Yet another productive week in the shop!
Paul
Bayou Salé GlassWorks