Spring Is In The Air

It was another somewhat quiet week here in the shop but that doesn't mean that we don't have progress to brag about. And let's face it, bragging rights are what this Blog is for! We like everyone to see what our students are doing and how far they're coming along each and every week with their projects. So let's jump on in...

Patty has finished the first of her 2 Fleur De Lis Windows. She was originally going to border this with the same glass that she used for the Fleur De Lis' but since we didn't have enough she decided to use the lighter color which I think works better. Dark borders tend to give windows a heaviness that Patty's window doesn't have. This color scheme offers privacy without appearing too formal. And I must say that Patty's soldering abilities have dramatically improved.

Julie has begun soldering her window and she's got all of the front side completed and about a quarter of the back side done as well. From the looks of things I'm going to have to draw up that second window real soon so she won't have to wait to get started on it as this window will surely be completed during her next class.

Roxie has decided on a pattern and has begun working on a window that's challenging yet fun. We asked her to start by cutting out the bird since it's got most of the hardest cuts. The water and the sky will be simple so once the feathers and irises are cut out she'll have no problems at all. As it stands she did great by getting most of the bird cut out in one class.

Jane spent her class prepping her mold for her next lamp. All of the paper pattern (called the 'cartoon') that attaches to the mold has been cut out and pinned onto the styrofoam mold so we won't have any surprises like we did with her last lamp which called for 6 repeats but actually needed 7. We've got this one completely under control right from the beginning. And I feel the need to point out that the Pattern instructions claim that this lamp has 2 repeats in it which I knew was wrong as soon as I saw it. It has 5 repeats which we verified when we got all of the cartoon onto the mold. Hope fully she'll be able to start cutting glass for this next week. 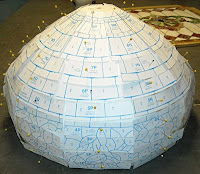 Lastly, with a few shows looming up ahead of us I wanted to be able to bring something flashy and this Peacock Window always does the trick. This is a bit smaller than we normally make it but when it's finished it will still stand just a hair over three feet tall. It's all soldered now (this picture was taken a few days ago) so I'll post a completed picture of it next week.The borders really add a lot to it.