Deadlines? Not A Problem!

This post is a little late, but not by that much. Christmas has manage to keep me off of the computer but I really wanted to be sure to get last weeks progress posted before we started our new round of classes tonight.

First off we'll take a look at the window that everyone in class has been following. I must say that it was VERY impressive looking when it sitting there on the table all cleaned up and polished but when we hung it up in the sunlight our reactions to it were all "ohh's" and "ahh's". Even from Grace and Janice. :-) The railing on the second floor of the "Grace's Pub & Grub" building was made by tacking wires into the lead lines. The overall look of this window was not to be 100% perfect with straight lines, but if we carried that look through to the railing it would have looked all helter-skelter, thus our decision to use wire which made it easier to ensure a straight line. All in all it's a beautiful window, wouldn't you say? 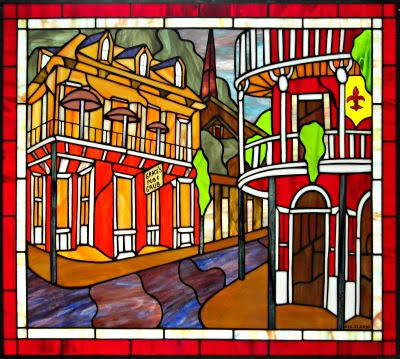 But that doesn't mean that Roxie's Lady In A Tub window is any less beautiful. It's actually harder to make than it may first appear because the window is only about 15 inches long. That makes the rose, its leaves and the stems coming from the vase a pain in the butt to work with because they're so tiny. The original design called for bubbles cut from glass that ranged in size from 3/4 of an inch to about 1/8 of an inch. Both Roxie and Patty had the idea to convert the bubbles into white-iridized glass globs which bypassed a lot of tedious grinding. And the rounded 3D effect of the new bubbles looks so much better than the design in the original pattern. It was hard to get a picture of this window while it was back-lit but you get a good feel for it with the picture I managed to take. 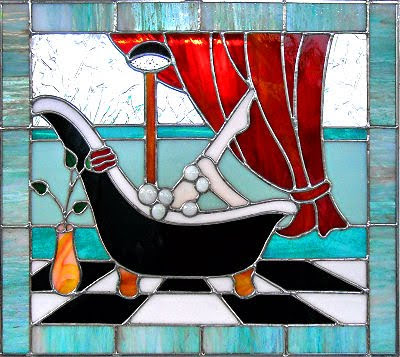 Talk about colorful. Terry's Mardi Gras mask window is all cut out save for the background. She's moving along so fast that I can barely keep up with her progress here in the Blog! There's no doubt that she'll be grinding this window during her next class. I think I can safely say that Terry has gotten the hang of cutting glass. :-) 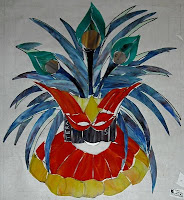 We got to see both Patty and her husband, Marty, this week. He was in to check out just what it is that takes up all of Patty's time on Thursday nights-- And he got to see a lot. Between Roxie soldering and completing her window and Patty cutting and grinding the background glass to her Shrimp De Lis window Marty got to see just about every aspect of making stained glass. And then before the night was over Patty even got her border cut and ground. She took the pieces home to wrap which means that she'll be soldering this one when we see her next. 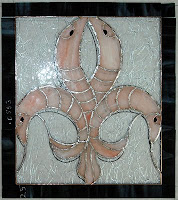 Ray picked out an abstract/geometrical design for his first window and he's moving right along. He started off a little unsure of himself, wondering if he'd bitten off more than he could chew, but now that he has 16 pieces of glass cut and only 12 to go I think he's feeling far better about his abilities. This week he worked with all colored glasses but during his next class he'll be dealing with clear textures as well. Ray should easily complete cutting his glass during his next class and then he'll begin standing in front of the grinder (so to speak!) 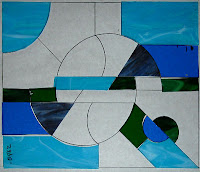 This next project by Paul is really going to be something to watch. I've been wanting to make one of these for some time now but I just don't seem to have the free time to make what I want anymore. When Paul told me that he wanted to make a Wardian Case and told me what he was interested in I knew just the one to do. When I showed him the picture he was was sold and this week he began his cutting. Since it's all clear glass it's hard to take pictures of right now, but these sections that you see will form the 14 panels that make the rounded sides of his terrarium. Mark my words, this will be spectacular when it's completed. 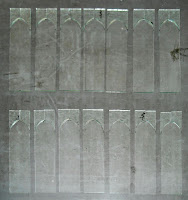 This next subject has always been a favorite of mine and Myrt's interpretation of it looks wonderful. Her Sun/Moon window is all cut and ground and even wrapped at this point. She just needs to pick out a color for her border. In fact, now that I think about it, this may look really good with two different colors for the border-- A lighter color on the Moon side and a darker color on the Sun side. We'll have to see what she thinks.

Anita's Panda window is just about complete. In fact, she's taken it home to solder so it could be more complete than I even know. When she came in with everything wrapped it only took a few minutes to tack it all together. Cutting the border took a little longer than normal only because the window that this will be going into isn't completely symmetrical and we had to pretty much cut the border sections one at a time to ensure that the window will fit when it's completed. But by the end of the night it was all cut, ground and tacked together. Rather than waiting until next week to solder this Anita has taken it home where she'll hopefully get a chance to work on it between all the Holiday things she needs to get done. 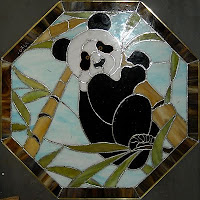 Next we have Fran who's making some good progress on her Ducks in Flight window. She has most of the ducks cut out and is contemplating changing her background design. That means she'll next need to grind and tack together these ducks to accommodate her background changes. We'll see what happens when she comes back in the shop. 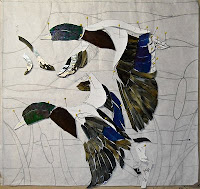 We have one more set of classes to go for this year and then we'll leave 2010 behind us. I'm not entirely sure if anything else will be completed this year or not-- I guess it depends on how far along Anita gets while she's at home since she's the only one close to having a window completed.

And speaking of the end of 2010, I have to say that 2011 is looking like it will be a very busy year. Here in the shop we'll be working on plenty of church windows in the months to come (I have one sketched out now) and I've been hearing our students talking about all kinds of great projects that they want to do next. Hopefully this won't be the last Blog entry for 2010, but in case it is allow me to say "Happy New Year!"