We'll start off looking with Roxie's Yellow Camp Window. The workwomanship is flawless and I must say that I'm going to miss playing with the letters of this window. It was always a challenge to see what else I could make this say on the Blog each week.

Myrt finished her Fancy Fleur De Lis Window and took it home. I believe she said that she wasn't giving this one away and that it was going to be found hanging out in one of her windows. So many of our students don't keep the windows that they make-- it's good to know Myrt will be able to enjoy this considering all of the extra work she put into it on the fancy scrolling inner border. 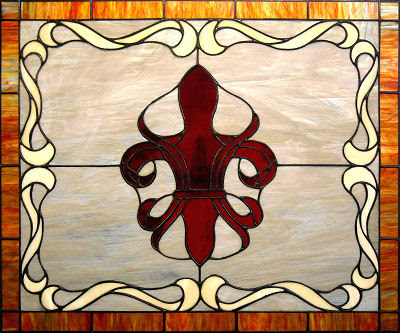 And here we have a look at Susan's first Business Card Holder. And it won't be her last one either. She'll tweak the pattern a bit for the next one but I can honestly say that there's NOTHING wrong with this as it is. (I've saved the pattern....)

This design came from a trophy that Cindy had. Terry saw it and said, Hey, that would make a GREAT window! So she drew it out on paper and started cutting it at home. When she brought it in last week it was all done save for the border and this week it's 100% complete. What a great design. Terry seems to have no limits when it comes to stained glass. 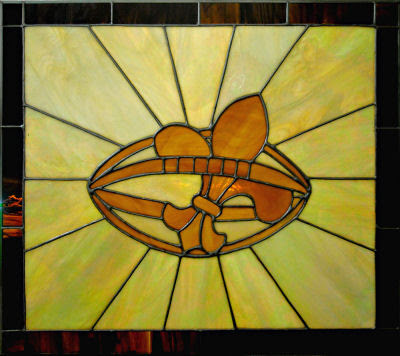 Now, Roxie finished up her Yellow Bayou window about midway into her class so she decided to start a Fleur De Lis box. She wasn't sure about making such a small FDL so we've decided to make it large and simply display the box in portrait format rather than landscape. It will still be hinged on the top and she can make the FDL large. She cut it out of a dark brown glass (Root Beer) but until there's some light behind it you would think it's black glass so don't let the picture fool you 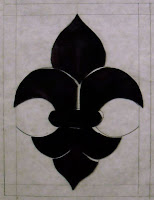 Patty is down to the shrimp. This window is so close to having the lions share of the work done that I can safely state that there's a visible light at the end of this Seafood Medley's tunnel. And it even smells delicious! Expect to see some background being cut soon now. And that will be easy.

Fran's Donkey Window is coming all together now. It's almost completely cut out and Fran has been grinding at home. If it weren't for a delay due to travel plans I'd say that we'll be seeing this tacked together shortly. Fran will be rejoining us for classes in about 3 weeks so her Donkey is going to be placed on hold for a bit.

Bonnie has her borders cut and the inner one all tacked into place. She has half of the last clear border wrapped and the other half she's taken home with her so she can come back next class with it ready to be tacked on so she can start soldering this. In fact, I think she'll finish this next time around. 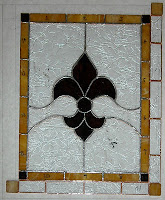 Lastly, Sonia has 4 pieces of border to cut and she'll be ready to solder this Peacock. Since blue is my favorite color I'm partial to this window. Truth be told, I've always loved the stained glass peacock windows that out students have made and this one is no exception.

I'm not going to bother explaining the Superglue title of this post because all of our students know what it means. And no, we don't use Superglue to fix breaks in glass. :-)

Catch you all soon!