Well, it's been a while since I saw one of these Hand Mirrors made. Christine made a slew of them a few Christmases back and Cindy had the exact same idea. I have no clue how many she's making but she appears to have about 15 cut out in various states of completion so there are a lot of them. This is her first completed Hand Mirror, expect many more to follow. :-)

This is Susan's second box but to me it resembles a chest more than a box. And since it was made for a man I think the fact that it reminds me of a chest is actually fitting. And speaking of fitting, I'd say her top fit the bottom of this box rather perfectly. Susan has an eye for detail and perfection as you can see from her finished project.

And as I suspected, Terry brought in her Fish Window and wanted to know what I thought of the work. After nit picking at the solder (I want her to think she needs me to finish a project!) I gave it my seal of approval and she washed it and colored the solder copper. After another bath and a little bit of wax she took it home after I snapped this picture of it. I love her choice of glass for the water. 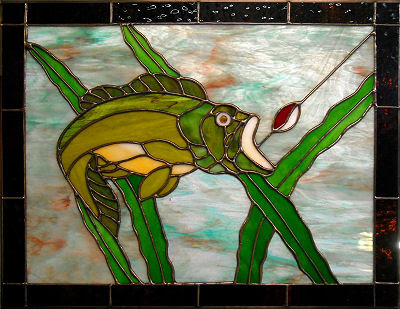 And when that was finished Terry resumed work on her Fleur De Lis Window. She has the front soldered already and all she needs to do now is grind and attach the border glass. Terry drew this pattern herself (as she does with most of her windows) and it looks great. 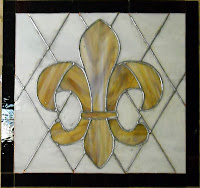 Sonia worked on the 3 layer border for her Peacock Window and now has the inner 2 borders complete. She's wrapping the clear center border at home and I forgot to take the picture of while those pieces were in place so you'll just have to use your imagination on what it will look like. Or you can come back and see what it looks like when she returns for her next class. :-)

Roxie's window is so close to being finished that it isn't even funny. The Zinc channel has been cut and tacked and the front side is completely soldered. The back side is about halfway soldered so this is going to be complete during her next class. I can't wait to see it lit up and I'm glad she didn't listen to me and use green glass for the letters. How she came up with yellow is beyond me. :-)

Pam was in and worked on this Mini-Duck Window. It's just about complete and only needs to be soldered now. We may need to put some brass channel on the edges since there are two long pieces of glass on 2 of the sides that may make soldering those lengths problematic. This is actually a very charming design and I may need to get me a copy of the pattern. 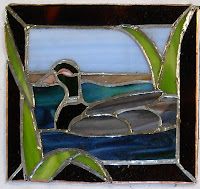 This next window is another one of Terry's and all it needed was a border. She tried a number of different colors with it but in the end we all agreed that Root Beer was the perfect color glass to suround this window. She got it all tacked together and has taken it home to finish up the soldering there. 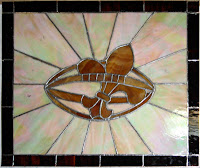 As I promised, there's a lot more to see of Fran's Donkey window this week. She's got it all cut out and has begun grinding it from the top down. With the sky and the leaves all set there's not much more to go to get this donkey on the road!

Bonnie decided that a Fleur De Lis was what she needed to work on next after completing her Rooster Window last week. She picked this fancy but tasteful Fleur De Lis design and set it into a crackle background. She's going with a double border with the last border matching the background glass. There's something about an inner colored border that really makes a window POP! This window will be no exception. 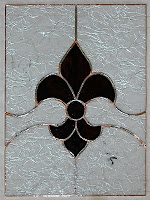 Ann's window looks GREAT! I love the design and her choice of colors. Since the front is all soldered and the back has already been started on I'd say that this may very well be completed next week. And I have to say that Ann really has caught on quickly to the soldering process. Aside from perhaps a little extra solder on some of the joints I'd say that this is a top notch job. I know students who have taken months to get as good as Ann already is soldering.

And Myrt came in and spent the class working on her and Anita's Mallard Window. One small piece of the sun needs to be knocked out and replaced because the grain is running in the wrong direction but other than that this window has worked out well for Myrt and Anita. It's all about teamwork. 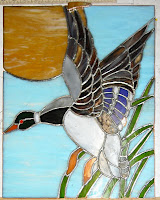 Myrt wasn't sure what color Anita would like for the border of this window she she decided to leave that ball in Anita's court (so to speak) this week. Like Terry, Anita ended up picking a Root Beer colored glass for her border. It's a color that is almost always safe since it resembles a wooden frame. 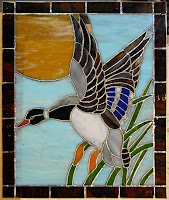 I have only 3 more Blogs to go before we're up to date. We're really making progress now. I hope to get at least 2 more finished this week but we'll have to see how that goes. And this time I'll never fall behind again. (Yeah, right.)

And before I leave I'll answer the question I started this Blog with. I commented that a FID was visable in one of the pictures in the last post and someone asked just what a FID is. Well a FID is used to flatten down the foil after you've foiled your piece they come in plastic now but back in the 70's (when I started doing this) they were pointed wooden dowels with a rounded end that made it easy to hold. The catalogs all called them FID's and when people would ask me what it meant I'd jokingly say that FID stood for Flatten It Down. Years later I saw a show about sailors and while they were untying knots they used a tool called a FID. Sure enough, it was a pointed wooden dowel with a rounded end to make it easier to hold. (look here) Go figure.