Although we have 5 completed projects this week they're all the same pattern.  But there's plenty so see when it comes to projects that are in the works.  Our classes are officially full as of next week so expect to see a lot of new projects getting started.

OK, let's start this off like we normally do-- with a look at a completed project.  Roxie has completed 5 of her Hummingbird suncatchers which means that she has only 3 left to go.  She doesn't have those cut out yet so I know what she'll be doing next week!  She made these as gifts and I think they're going to go over in a big way. 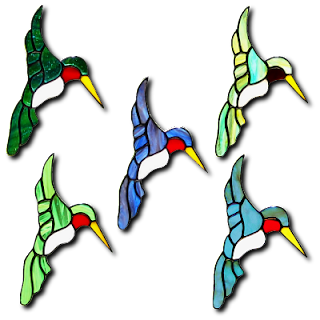 Next we'll take a look at Bonnie's Humingbirds and Flowers window which is really making a lot of progress.  She's ground all her leaves, cut out the red flowers and then ground almost all of them before calling it a night.  She only has to grind the 4 small pieces that make up her flower bud in the upper right corner and then Bonnie will wrap and tack all of this together.  Then she'll lay them on the background glass and trace the pattern directly onto the glass.  Once it's all cut there will be very minimal grinding to get everything to fit together.

Brenda started working on her first official window and it's (as you can see) a geometrical design.  She was so surprised when her first cut broke flawlessly along her score line.  Then, by the end of the class, she just sort of expected all of her cuts to run perfectly which they did for the most part.  I think she only had one break and that is a great batting average especially for someone who's working on their first project.

Lynn has only 4 pieces left to cut and then she'll be ready for soldering!  She made her border match the background of her two ovals and it all ties in together beautifully.  Rather than going with plain square corners Lynn is going to add some flair to her corners by curving the lines that touch the blue border pieces.  You'll be able to see what that looks like next week.

Martha got all of her backgrounds cut, ground, wrapped and tacked together  this week  Then she added some thin inner borders on each of her windows and got them all tacked together as well.  She's going to add one last border on all three windows and those last borders will match the background glass and be thicker than the borders you see on these.  These are all gifts and they're really going to really stand out.

Shelley has begun grinding her cat window now that she has everything cut out she's not 100% sold on how it looks.  But I've promised her that once it's ground and it all fits together she'll see just how nice of a window this is.  This is a normal reaction since the glass she has cut doesn't quite fit together yet, but that's why we have a grinder.  Once this is adjusted correctly on the grinder I'm sure Shelley will have a change of heart for this stained glass kitty that we're calling Twister. 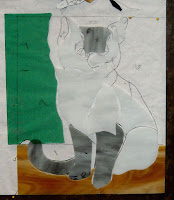 Now, I may be wrong but I only see 11 pieces left to go before Susan can start wrapping this window up (get it?)    She's really done a great job on this complex design and has never taken the quick and easy way around any of the obstacles she encountered while cutting and grinding this.  All of her pieces fit perfectly and line up within her pattern lines so it's impossible to find any fault in her work!  Kudos to Susan for making this design seem so simple. 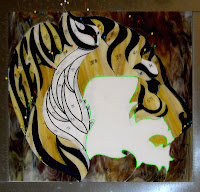 So after Terry left last week I expected her to come back this week with a border around her window but I never expected it to be this elaborate.  What a great look!  (And talk about a lot of work making it!)  It's like I always say, a fancy border really adds so much to any window.  And you can see that effect here in Terry's project. 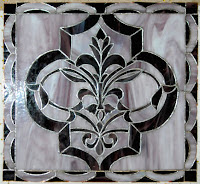 That's about all that's fir to print about what happened in class this week.   Have I mention our class Cruise yet?  About a month ago we  suggested that our students should tag along with us on the Carnival Elation in January and now 5 students are joining us!  It's only fitting that the Elation has a Stained glass design throughout the ship.  If we manage to learn the moves we're going to set the Gulf on fire when we all Gangnam Dance on Lido deck!