Our (friendly) Rival-- The Garden Club


Here we are back for another round.   We lost Myrt to a Garden Club meeting this week but I know we'll see her and her Balloons soon.  Meanwhile, we have thirteen projects to take a look at this week and three of them are even completed.  Actually there are nine completed projects if you want to get technical since Patty made five separate items this week and Cindy made three.  Let's get to business and see just what all these projects look like.

Twister the Cat has been completed!  Shelley worked hard on this window which matches her sister's cat pur-fectly.  For a while she toyed with the idea of adding the name Twister between the border and the floor that the cat is sitting on but in the end we all decided that it would be overkill.  The biggest problem with naming your subject in a window is the fact that the text  takes the eye away from the subject itself.  That said, here's to a job well done, Shelley. 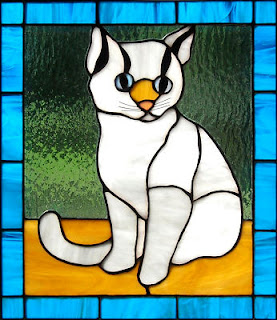 Next we take a look at the 5 Multi-Purpose-Desk-Accessories that Patty completed this week.  I think we'll have to start calling them MPDA's.  The design is subtly different from her first one and now an iPhone fits in it both snugly and securely.   The glass globs on the top of these were all hand picked for color and shape rather than randomly assembled.  And when you look at the finished product you can't miss how much flair Patty's color co-ordination added to these MPDA's.

Cindy also completed multiple projects in the form of three 3D Picture Frames.  She used Clear Iridized Crackle glass for the frames which gives them some color.  Cindy also discovered that every sixteenth of an inch counts when you're assembling something with angles that need to line up.  Each frame consists of just 8 pieces of glass but if your angles aren't 100% perfect, they will not fit together.  But Cindy's  look great and are going to make great gifts.  (And I do believe that Cindy said she had 4 or 5 more to make...)

Ann has started grinding the second of her small and intricate geometric design windows.  Measuring not much more than 12 inches in width you just know that Ann is working with some tiny pieces here.  When this one is completed she'll be cutting out a larger window based on the same design but since it's the same height as this window the pieces will be just as small.  When all three of these are completed  she'll be looking at 3 masterpieces.  In fact, I'll go so far to say that each of these windows is a masterpiece in its own right! 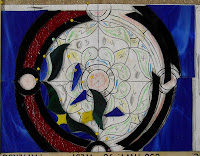 Bonnie's Hummingbirds and Flowers window is just about complete now.  She came in barely able to speak because she wanted to see more progress made.  She was quiet during class but managed to get all of her background fitting together and then tacked it all together for good measure before calling it a night.  Now the only thing left to add are the 2 layers of borders that are really going to make this window shine.  This pattern is elegant, graceful and delicate which makes it a definite winner in my book.

Brenda started a second Soccer Ball window this week.  She got the borders on the first one tacked together along with the name that you didn't get to see in last weeks post.  Now Landon and Slone will BOTH have soccer windows once Brenda gets the final borders on the Slone window (which will happen next week).  I feel I must point out the difference between personalizing these windows and not 'personalizing' Shelley's Twister The Cat Window.  The names on these denote who these windows are for.   We can all see that these are Soccer Balls therefore we don't need to label them with the words "Soccer Ball" or "Wilson".

Birds and Flowers used to be the most  popular subjects in our stained glass classes but I think they may have been overshadowed by Fleur De Lis' nowadays.  They're still VERY popular which is why  Donna came in and resumed grinding her Bird and Flowers window this past week.  Before class was even halfway over she had completed grinding all her pieces and then moved on to wrapping her glass.  She's got half of it foiled but she isn't finding the wrapping process to be as 'fun' as I do!  She'll be back to cutting next week when she moves on to the background and then the hard part of this window will be over with.  Maybe I can convince her to go with a double border also...

Jane worked on the Iris sections of her window this past week and she'll most likely be working at the grinder during her next class. I believe that the only thing left to cut will be the glass for the sky and that won't be cut until we have the rest of this all ground and tacked together.  You can't see the Iris leaves that she cut because she's taken them home with her so she can work on them throughout the week.  Yes, Jane is into her Stained Glass! 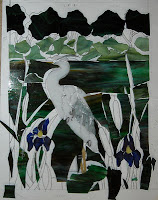 Martha began working on her State Trooper window.  She has the Fleur De Lis section completed and ground and has taken some gold glass home with her to cut the scroll sections out.  The lettering is going to be painted onto the glass because to cut the letters all out by hand would just be maddening-- too many small pieces in a small area.  She's also going to stretch the outline of the state a little higher putting more of a space between the top and bottom of the FDL.  Doing it this way ensures that the sections that she has already cut and traced out on glass won't change and will remain usable. 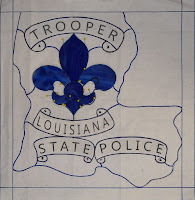 Tim was hard at work cutting the remainder of his Angel Window out.  Now that the oval section is finished he's begun grinding all of these pieces to make it fit together perfectly.  He's got almost half of it done and will probably begin foiling this after he grinds the remaining pieces when he returns next week.  Once that's done it's just 4 corner pieces and a border until this window is complete cut.

Susan is making a few more Lawn Ornaments and this time around she'll be making then in the form of Mardi Gras Masks.  She has 2 of them cut out and one of them already ground.  She took these home with her so I'm going to assume the second one will be ground when she comes back in.  Her next decision is whether or not to make these 3D or flat.  I'm leaning towards 3D myself.  :-) Her attention to detail in fitting her glass together is wonderful.  She clearly understands the importance of symmetry in a project like this.

I'm going to be perfectly honest here and say that when Terry walked in the door with this Rooster already cut out and ground my jaw just about hit the floor.  I think she's trying to give Cindy a run for her money when it comes to working with tiny, little, frustration inducing pieces.  She said it was hard work but just look at this thing (be sure to click the image to see a better view of it).  I know that right now it looks like the Rooster is squirting something out of its butt here-- that will change when she gets the rest of her sun rays cut out.  LOL There are a LOT of background pieces in this window so Terry still has a lot of work ahead of her but I know she's capable of doing it.  Call it a labor of love.  I can't wait to see what this looks like when it comes back in. The patients where Sonia works saw it fit to follow their schedules and allow Sonia to leave work on time to come to class this week.  Lately they've been holding her up and forcing her to miss her very important Stained Glass Therapy Lessons but not this week.  She now has all of Charlie Brown ground as well as having a good portion of it wrapped.  Pay close attention to the spot on Snoopie's  back.  It was actually cut into the his back by grinding a small hole in the center of the piece of glass and then enlarging it with the small grinding wheel until it looked something like an oblong doughnut.  This is the first time one of our students has made a cut like this.  "Look Charlie Brown, No Lead Lines!"

It certainly was a busy week here at the shop.  Next week is Halloween so I'm not sure what to expect but I know we'll see progress-- We always do.  Luckily I don't believe there will be another Garden Club meeting so we'll most likely see a familiar face return to working on her Balloons on Tuesday night.  :-)


Posted by Bayou Salé GlassWorks at 11:19 AM