With an Easter Weekend ahead of us we decided to take a trip up to PA to visit my family for the Holiday.  Classes were cut a bit short due to this trip but there's still plenty of projects to look at.  Having just returned this update is a week late but since there were no classes following Easter we're now (as you read this) up to date and ready to start a full week of classes.

Let's all give Martha a big round of applause for her Cross and Flowers window hanging.  With the bulk of the work being done almost entirely at home this is a project that put Martha's skills to the test.  And the good news is that she passed with flying colors!  She had brought in the pattern for me to look over but the original had the flowers made as a separate entity and then tacked on top of the cross.   That's all fine and dandy if you don't mind the flowers always staying dark since there would never be any light behind them.  Then there's the problem with the fact that they wouldn't be seen from the back side of the cross.  So we re-angled the flowers and stretched them out here and there to make the cross cut-able. Now it lights up wonderfully and the flowers are visible from both the front and back. 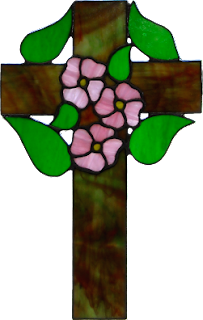 Jane came in and put the finishing touches on her Classic Stained Glass Window Design.  I went over her soldering by simply touching up a few joints to make sure that things were flowing together evenly and then it was complete.  After a little consideration and a small vote within the class it was a unanimous decision to leave the lead silver since that look worked best for this window.  Jane also worked on something else that I didn't manage to get a picture of and I can't remember what it was for the life of me!  (My mind doesn't work the way it used to.)  So I guess we'll see what that second project was in our next update! 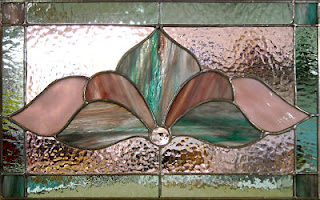 This is Terry's latest window and it's her variation of our Tiger Eyes window.  Terry's simplified it without taking away any of the Tiger's personality in the design.  And the simplification means that this version is much easier and quicker to make (not that Terry can't complete anything quickly!)  This is yet another standout job by Terry. 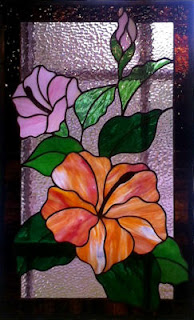 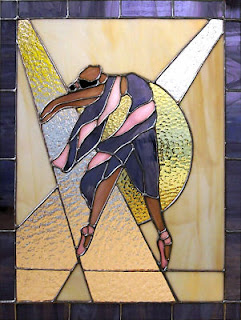 Brenda has certainly been busy.  Here we get to look at the two windows that she completed this week-- Her Ballerina Dancer and her Hibiscus Window.  Brenda's really become an accomplished student and the funny thing is that she had once said that she'd never be able to do this!  Well, I'll just let her work show her how wrong she was.

We've been looking at Ann's project in bits and pieces since the new year so let's take a look at her window in it's entirety.  The upper left quarter circle is already assembled and tacked together.  The upper right quarter circle is ground and ready to be foiled once she cuts 2 final blue pieces (which happen to be the largest pieces in that section so they'll be easy enough).   And the large center half circle is moving right along now that the majority of it has been ground.  Once these three 'circular' pieces are tacked she'll join them into a single window with more blue glass as the background and then finish it off with a final black border.  There are a lot of tiny pieces in this but Ann is sticking to it and seeing a lot of progress now.

Martha took a week off from working on her Frog Window so she could work on this Angel as a gift for someone.  She doubted she could get this far in a single night but she did wonderfully since the angel is all cut out and about half way ground.  I can't wait to see this completed because Martha's moving with lightning speed on this Angel and I know it will do a lot to boost her confidence even further.

Brenda also worked on her Fish Window this week and it's making quite a splash.  A lot of our students get disappointed when they cut out all their glass pisces and it doesn't fit together on the pattern.  Well, that's why we have grinders.  I don't care how perfect you think your glass cutting is, everything will need to be ground to get the window to fit together.  That said, there's no mistaking what this window is even though it isn't ground yet.  That's a testament to how good Brenda's become at cutting glass since the subject matter is plainly recognizable.

Donna came into class with a mission in mind: To cut out these two door inserts.  Not only did she pick out glass and then cut them, but she also got them both ground as well.  And all in the confines of a 3 hour class!  She did have some incentive though-- a deadline before the weekend!  All she needs to do now is foil and then solder these and I know she's more than capable of accomplishing that at home.  Isn't it amazing how the use of color can make a design look so different?

Shelley's Woman In a Bathtub will certainly be completed when she returns.  With everything tacked together and the front completely soldered she knows she's just about ready to come up with something for her next project.  I still like the look of this window with the double border and I can't wait to hang it up for it's official picture next week.  It's been a lot of work for Shelley but in the end every minute she spent on this shows up in the finished product.  Not a moment was wasted time. 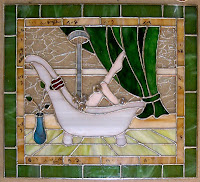 Terry also began working on her newest version of an LSU window.  I believe she's actually making 2 of these (remember, my mind isn't what it used to be...) and this one is already ground and primed for some foil and solder.  I'm half expecting to see both of these together when she returns for her next class. 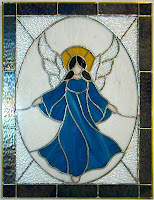 Next we have a look at the THREE(!) windows that Tim has been busy working on.  Two LSU windows to the left and the second rendition of his original Angel Panel on the right.  Tim has been working on these non-stop and the only work left is for them to be soldered.  And I'd like to point out that all of his work is going to benefit charity.  BTW, the 2 LSU windows are identical in colors-- one is sitting on a table and the other is on a white piece of paper which is changing the look of the glass between pictures.

Cindy has started making her Morning Glory Flower Mirror but this isn't a hand mirror.  It's a wall hanging mirror for her bathroom.  She has a number of the flowers cut, ground and tacked together but by the time I got to her section of the work table she's already packed them up for the return trip home.  So I snapped this partial picture of her pattern to at least let everyone see what it will look like. 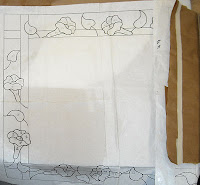 That about does it this time around.  Classes resume tomorrow and I'm expecting everyone to arrive so expect and update of epic proportions when you hear from us again.  Even I can't wait to see what our students bring in the door with them!