I Would Make Anything In Glass, But I Can't Make That

Lately I've been hearing some of our newer students exclaim that they can't do 'that'.  In each case I take great pride in proving them wrong!  I understand about having doubts-- it's something that seems to plague us all but I want to let everyone know that the worst thing you can do is doubt yourself.  Doubt only places an extra hurdle between you and your goal.  Luckily, my job is to help reassure our students and prove that they can do all of the wonderful things that you're about to look at in this post.  And I must say that I just love the look on a student's face when things actually work out well for them!

So with that said we'll take a look at the second of Lynn's Seahorse windows which is now officially completed.  Trust me when I say that the two mirror images make a beautiful pair indeed.  Designed completely by Lynn herself she even went so far as to point out the one part of the design that was somewhat problematic for her.  We discussed it and the options she had to change things and she now understands how to break apart thin sections in long runs without adding extra lead lines.  These two windows are wonderful examples of what our students can do on their own.

Tim's last Tiger Eye/LSU window is every bit as stunning as his first.  The only difference between the two windows he made are the color of the Tiger's eyes.  We have a lot of different tiger eye window patterns and this one is by far the most labor intensive of them all but it's also the most realistic.  Just look at that face!  And Tim's touching up of his soldering shows that he's come a long way since he first started just a few months ago. 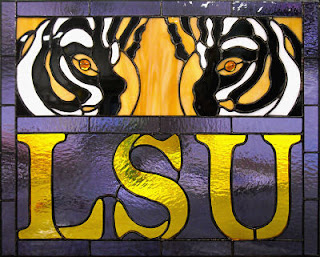 Betty finished her cross this week and after a quick look over I gave it an immediate seal of approval.  The heavy textured glass made it a bit tougher for Betty to get a straight lines in the arms of the cross but Betty did achieve it .  The use of the curved bevels also adds a lot to the overall elegance of this piece. 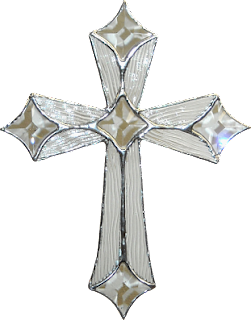 Betty also continued working on her Geometric/Victorian Stained Glass window and has it pretty much under control at this point.  With the center piece ground, wrapped and tacked together Betty was able to cut out all of her background glass without any problems at all.  I love the fact that she was so worried about this not fitting together and yet look at how this fits--.now she knows that there is room for a margin of error when it comes to stained glass.  Do you see any flaws in this window?  I don't!

Ann's Geometric design is so close to being completely ground that I can't wait to see her start on her background glass!  The background will consist of only 10 pieces and they'll all be extremely easy to cut so this is really nearing completion now.  And the best part of her background pieces is that none of them are tiny which means they'll go together quickly and easily.

And speaking of tiny pieces, Susan's got the majority of her her window wrapped now.  Some of these pieces are almost miniscule but every one of them fit together and aligned perfectly before they were foiled and then again after she'd foiled them.  Susan left the perfect amount of wiggle room to ensure that the pieces wouldn't grow and swing out of alignment once she added foil to everything.  When this comes back in she'll have her background glass cut and add her double borders.  I'd say that the light at the end of the tunnel is at most an arms length away. 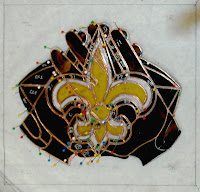 Talk about a blast from the past.  It's been a while since we've seen this window laid out on the work table but here it is.  Yvette had to drop her project when she went back to work and now that she has a baby (Miles!) it looked unlikely that this would get completed.  But Bonnie has decided that she would help Yvette finish off this window in between projects of her own.  There's a lot already done on this Peacock but there's also a lot that isn't.  It won't happen overnight but Bonnie is going to spend a little time each month on this until it sees the light of day.  This week Bonnie added the green feather pieces into the tail and then began grinding them.  There are only one more set of tail feathers to go and the rest should be fairly easy.

And speaking of babies, Brenda's Woman and Child window is officially ground and ready for foil.  Once it's tacked together she'll cut her 21 piece border and solder this up!  I love the painted face (I've said it before but I just have to say it again).  Brenda's use of pastel colors really make the woman stand out.

Cindy's not Monkeying around with this window.  It's only been two weeks and she's got this practically ready for solder.  The center has been tacked together and she was wrapping the border pieces as I was snapping this picture (which explains the missing border section on the upper left).  I'm pretty sure she had finished wrapping all of it before class ended so this will definitely be shown completed in our next update. 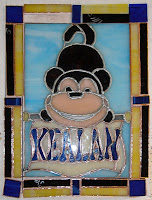 Donna came in with her Iris, leaves and flower pot not only ground but tacked together as well.  From there on out it was fairly simple to finish off the glass cutting so she could continue this while she's at home this week.  She picked a clear glass for the background and then a heavily textured clear for the border.  I have no doubt that this will be finished when I see it again so expect the final picture of this in our next post.

Jane also made some major progress on her Rose Window.  She came in with all of her flower petals tacked together so she began  cutting out the rounded background section.  Once she finished cutting and grinding them I thought that she might possibly get them wrapped and tacked together before class ended but then she surprised me and even got the second background that squares the window cut and ground.  The piece in the upper left is missing only because Jane was grinding it as I was snapping this picture. 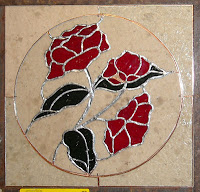 Martha's been bouncing around a bit from project to project but each of them are seeing progress.  She took her Frog window home with her to solder the back side this week and while she was in class she worked on cutting out the background of her latest Dragonfly Window.  It's a little smaller than the one she made before but that doesn't detract from the design at all as you can see here.  She's begun grinding it and will continue working on this while she's at home.  This is looking great and we'll see it finished soon! 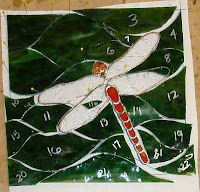 Myrt's also moving along quickly on her Pelican Window.  I'm pretty sure this is her second week of work on this multi-pieced project.  She's got it all cut out already and practically has it completely ground as well.  I love the way she took the initiative to redo the pattern to make it her own.  I think she's going to be real proud of this when she completes this project.

Wow, doesn't Terry's Faux-Beveled window looks incredible?  It's all cut, ground, wrapped and tacked together and ready for the border to be added at this point in time.  Her use of clear textured glass along with a bold textured red makes this window nothing if not visually striking.  This is essentially a one colored window since it's done in only red and clear and I can't wait to see it back lit! 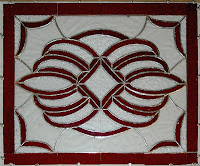 Well, with all of what you've just looked at being done in class and at home I find it hard to believe that we have students doubting their abilities.   I always say that if you pick up a piece of glass and expect to break it then it almost surely will.  Just a little confidence can carry you a very long way.  That said, we never let anyone start anything that we feel they can't accomplish so if you've started a project with us then you should always expect it to turn out wonderfully.  It's a class rule that we never break!