Fire In The Hole!


As promised we're going to start with a few basics about making stained glass at least until this flower suncatcher is completed.  Hopefully it will serve as a refresher to some and for others it will open their eyes to steps that they might have missed when they first started.  We're going to begin by looking at the pattern for our flower.  If your pattern is cut out irregularly then your glass pieces will have no hope but to be rough images of the shapes you are striving for.  I see a lot of beginners start with patterns that look like the one on the left. (Click on the image to see it enlarged so you can see the differences between the two cut out patterns.)  This isn't a good start and only makes the rest of the work harder.  Your pattern should be cut out smoothly like the one on the right.  All curves should be subtle and graceful, not choppy and pointed.  Starting off with pattern pieces that don't match your pattern leads to pieces that can't possibly fit together correctly.

Now lets get to our students work.  Here we see that Bonnie's 16" Baroque Lamp is officially completed.  She may have complained about how long the project took but you can't deny that it is beautiful.  She hasn't picked out a base yet so I have it on one of our new bases, but Bonnie is leaning towards an old re-wired base to give her lamp the proper finishing touch.  I don't care what it stands on-- no one will be able to take their eyes off of this lamp shade! 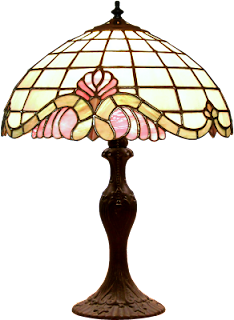 This week also brought us to the conclusion of Shelley's Dog in a Cemetery Window.  Her work is spot on and the colors are perfect-- a bright blue dog amidst the cold lifeless colors of the cemetery just worked out perfectly.  Shelley has come a long way in class and her newest window certainly shows it. 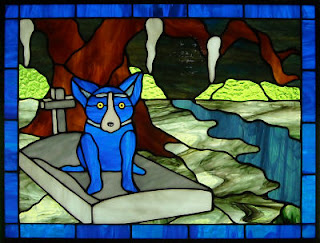 Tami is one of our newest students and the work she accomplished on her window was impressive indeed. She started off wanting to make a simple single flower but I pushed her to go a little farther with a more complex pattern.  In the end I'm certainly glad I did it because she handled every step with ease.  Sadly, Tami won't be able to remain with us.  We're going to miss having her in class but this window will always remind her of our brief time together and what she managed to accomplish in that short time span. 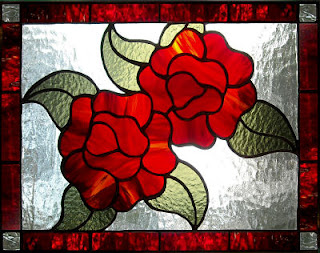 Betty started this Beveled Cross Window last week and when she left all it needed was a border.  This week she came into class with the window completed!  She'd made sure that it has nice right angle corners that all line up with one another and with 4 curves that all look identical.  And I'm going to give Betty extra credit for remembering to start and stop the foil on all of her border pieces where another piece of glass will butt up against it.  There's nothing worse than soldering  the edge of a window and having the foil pop apart because of the heat. 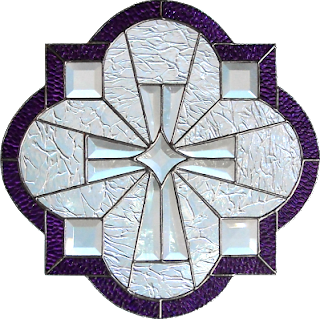 Our last completed project this week is this Ballerina Window that Terry started just last week.  She drew the pattern herself and obviously couldn't wait to get to work on it.  I especially like the way she didn't take the easy way out and split the clear glass to the right and left of the skirt into 2 pieces each.  It would have made an easier cut but it also would have made the only superfluous lead lines in the entire window.  Also, I love the way we can see this ballerina's legs through her sheer skirt.  It's little things like that which make a window really stand out. 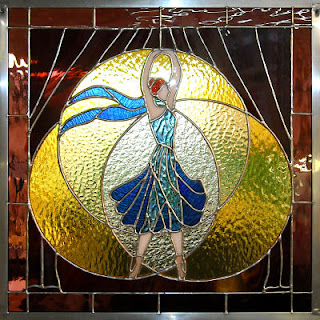 Well, Becky's Rose Window is all cut and tacked together which means that she'll be doing some heavy soldering next week.   It's so hard to believe that this is Becky's first window with us when you look at it.  Even though it's unfinished it looks great already!  She has numerous ideas for other projects and I can't wait to see them turn into completed works. 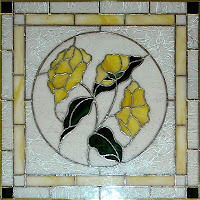 Betty also worked on this Abstract Nativity Scene window and plans on filling it out with either a double or a triple border.  She plans on making a second one in a larger size so don't be surprised when you see this done again in possibly slighy different colors next week.

Brenda got the pattern drawn for her Fancy Fleur De Lis and then started cutting out all of the paper pattern for it.  She'll be cutting glass next week on this and I have to say that it already looks like it's going to be a winner.  Other students are already talking about how great this border looks. 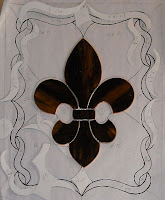 Cindy had to hold off working on her Star and Blue Bonnets Window due to some confusion about the finished size of the piece.  It turns out that there was, in fact,  a discrepancy but luckily we've managed to alter the pattern without the need to change anything that she's already cut out so she'll resume working on that project next week.  This week she completed her Indian Squaw Head but forgot the pattern at home so we couldn't finish off the wire work it needs.  Without missing a beat Cindy then started cutting out this Water Lilies Suncatcher as well.

Linda's Celtic Knot Window is already cut and ground and tacked together on only it's second week of life!  Talk about making fast work of a large window.  I love that she filled out the background with some extra cuts and bevels to fill in the empty sections that most people would have just left blank. Her final border color is a dark green and I'm thinking that this has a fairly good chance of being completed next week. 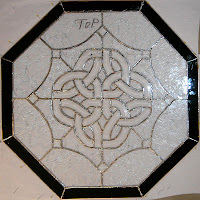 Martha's Crosses are moving right along.  With all but one of them wrapped and tacked together she began picking out background glass for each of these small windows.  The backgrounds are all cut to the proper size which means that next week she'll just trace the crosses onto the glass and then cut away the excess making a perfect fit.  Then it will be border-time!

Mary Grace has her window completely ground and is now in the process of wrapping it.  Her inner green border was a little small so we just adjusted all of the other green border pieces to be the same width and then pushed the outer blue bevel against it.  You can see that the outside line of the pattern is about an eighth of an inch off but everything is square and it all lines up so that eighth of an inch is nothing but an incidental. 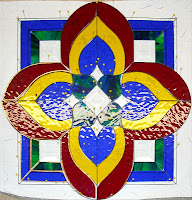 Susan's got 2 sections of her Panel Lamp wrapped and ready for solder and to be honest I'm unsure of this is her 3rd or 4th section that she's grinding now.  I do know that it's all cut out and that everything lines up perfectly which is pretty standard for Susan's work.  This is going to be seeing the light of a bulb any day now!

Terry made her Ballerina Window while she was at home so while she was in class she worked on this Deer Window (Which is turning out to be a very popular pattern).  She's made a lot of headway on it so I'd say that Terry's back to making (at least) one window a week!  The lamp she made was a nice diversion but Terry says she's going to be working on flat windows for a while. 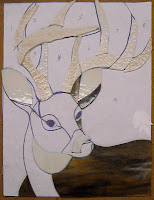 And that about wraps things up for this post.  Make sure to come back next week when we delve into the actual cutting of our suncatcher flower.  And, as always, we'll look at everything that our students have accomplished during the week as well as highlighting whatever projects are completed.  See you then!