She Picked Something Up

It's been a busy week here in the shop -- We're about to install more church windows and time is fleeting so we're going to skip our tutorial for making a suncatcher and resume it again in our next post. So, let's start off, as always, with our completed projects of the week.

Linda's Octagon Celtic Knot Window offered her no challenge at all!  I think she completed this within three weeks and I have to say that Linda made it look like child's play.  She found the back side (the bumpy side of the glass) to be a bit more of a challenge to solder but as you can see from the picture it all worked out in the end.  The beveled knot alone would have looked just fine in the center of the window but the extra curved ring of square bevel accents filled in the empty spaces perfectly. 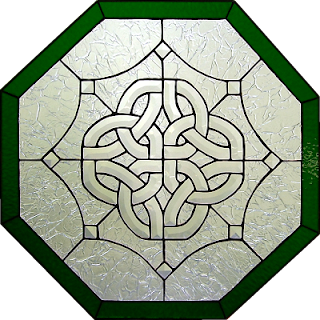 Cindy's Indian Squaw Suncatcher turned out wonderful.  It was more or less completed last week but she forgot the pattern at home so we were unsure of how the wire nose and the beads that form the necklace were placed.   Cindy actually used a wire instead of a chain for the necklace so it maintains its rounded shape while it's hanging rather than clumping together in a pile. 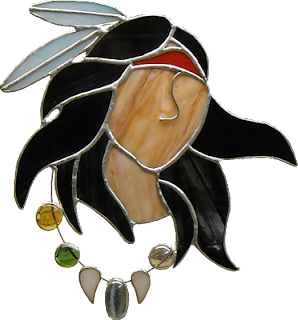 Ann had decided that she wanted to make an Angel Hand Mirror and came up with this design all on her own.  She had the Angel cut, ground and wrapped and tacked together so it was a simple matter of cutting out the rounded mirror and then soldering it all together.  I really like the size of the actual mirror that Ann's made here-- You can see an entire face in it with no problems at all. 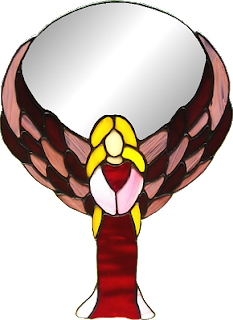 Anyone even the slightest bit familiar with this Blog knows that when you see a stained glass Butterfly we're about to introduce a new student.  The interesting part of this student is that she has the same name as another student who is currently taking classes.  So without further ado we are pleased to introduce to you Linda L and her wonderful green Butterfly.   She had no problems whatsoever making this so when she starts her LSU window next week I think we can safely expect great things.  (I just love putting the pressure on!) 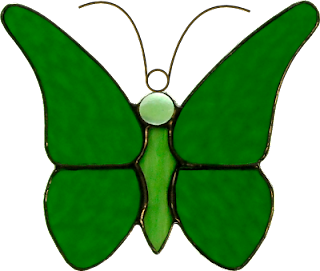 That wraps up the completed windows this week so now we'll take a look at projects that are currently in the works.  I do believe that this beautiful Yellow Rose Window will surely be completed next week.  Becky's first window is going to be a hard one to top because everything about this is perfection.  Her curves all flow perfectly, her straight lines are uniform and her inner circle is spot on.  She has her eye on some Fleur De Lis Windows and a nice Horse window but I'm unsure what she'll do first.  Come back next week and we'll show you just what she decides to do next! 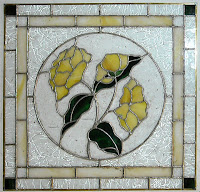 Betty has gone all out with the modern Nativity Window that she's making.  Feeling that one border would make the window somewhat nondescript she's opted to go with a classic, church-like triple border.  The corner sections aren't completed yet but they will be when she returns and you can already see just how much a fancy border adds to a window no matter how simple the design.  Betty also began working on an Iris Corner Piece while she was at home and she has it all cut and ground.  She was wrapping it while she was in class but the Nativity window kept her pretty busy so she only got two or three pieces of the Iris wrapped.  But I wouldn't be surprised to see this come in again all tacked together and ready for its closeup for it's feature on the blog next week.

Now tell me this isn't a gorgeous window.   Brenda added another straight border to frame out this Beveled Cross Window and I have to say the the end effect is nothing short of spectacular.  Just two colors alternating outwards make this a very elegant design.  She did a wonderful job lining everything up because it looks perfectly symmetrical to me so I'm giving it two thumbs up before it's even completely soldered!  Wait until you see this when it's completed. 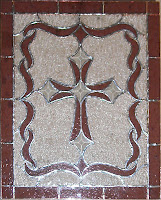 Cindy resumed work on her Star and Blue Bonnets window.  Her pattern has been adjusted to fit into the new size and she's about to begin cutting flowers.  Sadly, her Waterlilies suncatcher met with an untimely demise.  The pieces slid out of her hand and literally crashed onto the ground.  The flowers themselves are intact but there's nothing left of the water to speak of.  Therefore, when we see it again it will have new blue glass cut for the water.

Martha's making major headway on her own Beveled Cross windows.   She's got four of her backgrounds cut and ground with a fifth one just about completed. That means that she'll most likely be cutting borders when she returns.  To make things go nice and easy Martha has cut the backgrounds to the exact size of the crosses.  This will negate extra space in the window's background and make them actually seem fuller than larger windows made with the same sized cross.  In other words, these are going to make great gifts.

And speaking of crosses, Mary ended up selecting a new background glass for her Beveled Cross Window because it's been 2+ weeks and her background glass is still back ordered.  She's gone with clear Artique Glass surrounded with a clear granite backed glass which will certainly make the beveled cross sparkle.  With everything cut and fitting this well already I doubt that Mary will have much grinding to do before this gets wrapped and tacked together. 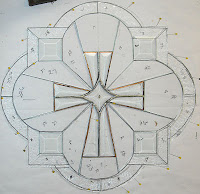 Mary Grace is all tacked together now.  Or should I say her window is!  Like Cindy she had a bit of a problem this week when her window took a header into the grass.  Luckily only one piece broke and all the King's horses and all the King's men managed to get Mary Grace's Window back together again.  She'll be soldering this when she comes back in for sure. 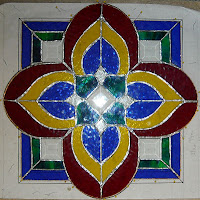 Shelley started her newest window and I have to say that her cutting has come a long way.  With all of the sand just about cut out she'll be moving on to the water, sun and sky next.  When this beach scene is completed Shelley will paint names onto the buckets along with footprints in the sand to represent her grandchildren.

Terry's lamp is completed so she has two irons back in the fire this week.  With her Deer Window almost completed (all it needs now is solder on the back side) she decided to do the lead work at home.  While she was in class she started working on a Cross Window of her own very similar to what Martha is making.  It a very nice shade of seafoam green that really adds to the crosses distinctiveness.  All it needs now is a border so I'm expecting both of these to be completed real soon now. 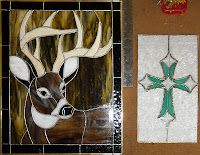 Wrapping things up we look at the same picture that we saw last week of Susan's Panel lamp.  The reason we're looking at an old picture is because Susan cut and run without saying that she was packing up which meant that I didn't get a picture of the fourth side of her lamp.  Punishment for running out on us involves listening to un-danceable elevator music all during class next week.  She's really gonna hate that.  :-)

I promise to have the second installment of our 'Return To Suncathers' lesson in the opening paragraph of the Blog next week.  Everything is coming to a head all at once here in the shop and the place has been nothing but hopping!