I Was Waiting For You To Shut Up

Betty made this Beveled Window while she was at home and brought it in to get some hooks attached and its photo taken.  There are 32 pieces in this window and only four of them aren't bevels.  If you look again you might notice that there isn't a single curve in the entire window-- it's all straight lines.  My hat goes off to Betty for keeping all of her lines straight without any waver whatsoever.  That's what makes this window look so good. 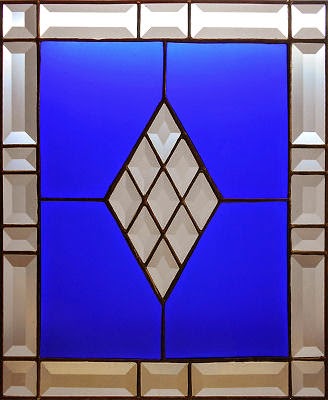 Paula's MLB baseball Suncatcher looks great!  To make sure the bat stays securely attached to the ball we ran a thin piece of wire around the outside edge of the suncatcher and then buried it in the lead edge.  The end result is a wonderfully stable suncatcher that without the wire would fall apart quickly.  Now it's strong enough to be hit out of a ball park! 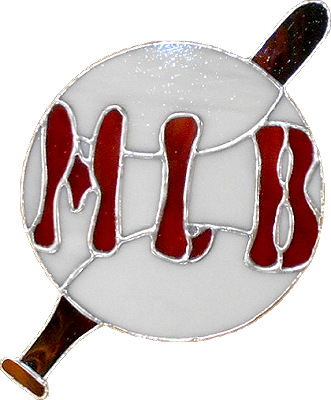 Ann's Crosses turned out beautiful.  She used one piece of iridised glass for each cross but positioned her pieces to get the maximum effect of the colors that each sheet had in them.  The top left Cross is made out of purple iridised glass which didn't have much color throughout so she flipped key pattern pieces over and used the back (un-iridised) side of the glass to give the cross some variety.  The Cross on the lower right is made out of black iridised glass which has many colors throughout the sheet.  By carefully positioning her pattern pieces it looks as though she used at least 4 different colors to make that cross.  But she didn't! 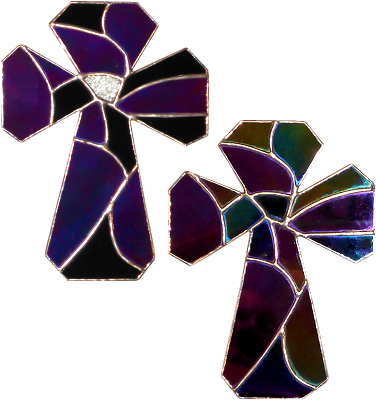 Bonnies work has been conspicuously missing from our Blog updates for the past few weeks because she had decided to make this Horse Window for her daughter and didn't want to take a chance that it would be spotted on the Blog so Bonnie asked me not to post any ongoing pictures of it.  I've been documenting it week by week and promise to show you the progress it's made  in a future post.  And the reason I'm unveiling this now is because the cat is out of the bag... Or is the horse out of the stall?  Let's just say that it's not a secret anymore.  And that came from the horse's mouth. :-) 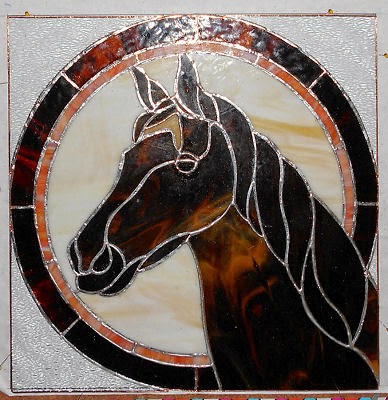 Baby the dog is moving right along.  There are only a few pieces left to grind in the name and then Brenda will tack this all together and add her border to it.  I can certainly see that border happening when she returns next week because this window is almost history now! 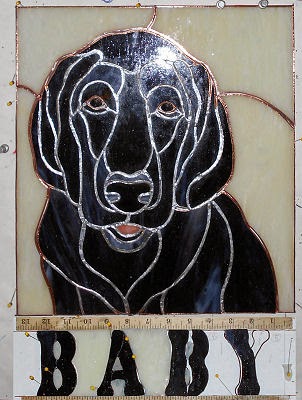 Carol's Tabasco Window is all ground, wrapped and tacked together.  The actual label for the bottom isn't painted yet so what you are seeing is just the pattern beneath the window but it will certainly be ready to be tacked into place when Carol comes back in.   In fact, Carol has taken this home with her so she can get a head start on the soldering process.  I loved this window when Patty made it and think that I'm going to love Carol's version of it as well. 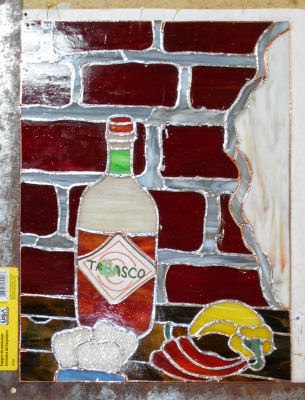 Janet's Rooster Window is almost all cut out and ground.  This is bigger than you might think by looking at the picture so I'll get some actual dimensions to pass along to you next week.  I may be wrong but I think that all Janet has left to do on this is to cut out 10 pieces of clear background glass.  It's really looking great and I can't wait to see her face when she sees it completed because it's going to be a looker!

Terry's latest Symmetrical design is just about out the door.  With the center section all ground Terry set upon wrapping all of her pieces during class.  Before she left she had the center tacked together and the pieces of her border all cut and ground.  This is yet another window that I think will be completed when Terry comes back for her next class.

Cindy started soldering her Magnolia Lamp after she got the cap attached to it and filled in a few pieces that overlap the three sections that make the lamp.  She's got all the upper grid work done and some of the flower band which means that this lamp is almost finished! 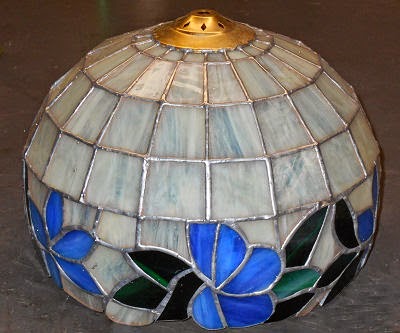 It looks like Linda L only has five pieces of glass left to cut out and grind into place before she can start working on the border for this window.  And we all know how quickly borders go.  She's taken it home with her to get a head start on wrapping her pieces so this is ANOTHER window that just about completed now. 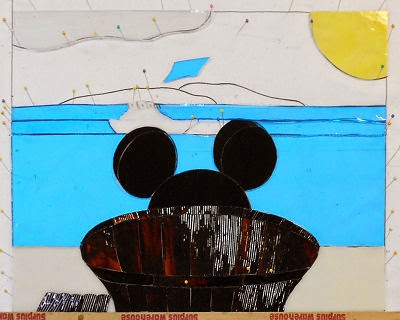 It's hard to see what's going on here but that's only because there's so much clear glass in this terrarium that Lynn has begun making.  She's got a huge portion of the project cut out and has already begun grinding all of her pieces and wrapping them.  This will be hard to see as she's working on it but the end result is going to be spectacular and will photograph perfectly. 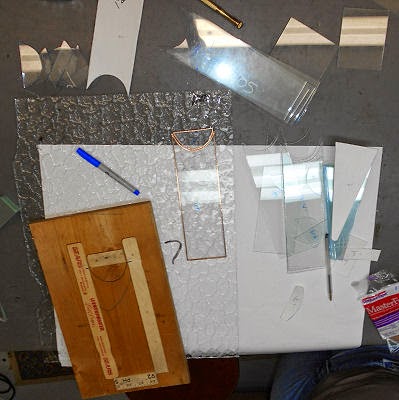 Moment of truth here.  Everything is filled in save for the bottles in Susan's Abita Window.  Well, technically there are three small holes but they've been filled in since this picture was taken.  We've devised a way to support the actual Abita bottles while Susan solders this but our next endeavor will be getting the bottles to fit into the window perfectly.  And that will be explained in detail when Susan returns and we fill in the last two pieces.

Myrt officially completed all of the grinding and wrapping on her Cross and Dove Window so she's going to be soldering these four sections when she comes back in next week.  It's going to be difficult to photograph these with light behind them but I think I may have an idea.  We'll probably see how that works out next week or the following week when Myrt completes these. 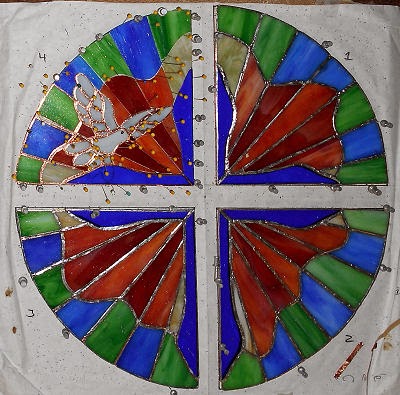 For some reason I was under the impression that Martha was making three or four of these Stylized Fleur De Lis Windows but she's making a pair of them.  They're for different people so she's not worried about them matching but now that the FDLs themselves have been tacked together Martha has begun cutting her background glass out.  She has one down and that leaves her with just one more to go.  Before you know it Martha will be working on the borders to these.

Rowena's first cluster is officially tacked together and I think she had a lot of  'fun' wrapping those tiny little pieces. (Read that with a tad bit of sarcasm.)  Making sure nothing got mixed up added an extra level of difficulty to the process but in the end it all worked out.  Once everything was tacked Rowena began cutting out her second cluster.  In fact, you can see all of the pieces arranged in numerical order traveling along the top and the right side of the pattern.  That means Rowena will be grinding when she returns.

Betty's Three Wise Men are all ready for solder.  In fact, the front side is already soldered and her brass channel is on the window so I can't wait to see what she comes in the door with next week.  I know this will be ready for its closeup but I have no clue what Betty plans on starting next. 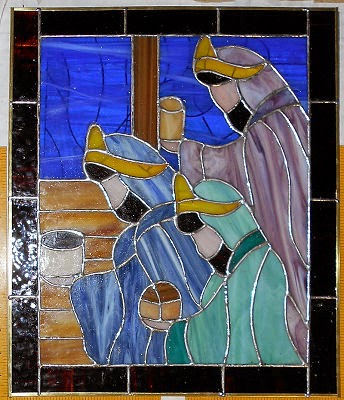 Check out Mary Grace's Iris.  With just the background left to cut I'd say that Mary Grace has this window completely under control now.   Once this is tacked together she'll cut out her background and then consider what she plans to do for a border(s).  It's going to be tough to screw this up at this point, all of her choices have been spot on so I expect nothing less than perfection from her finished piece! 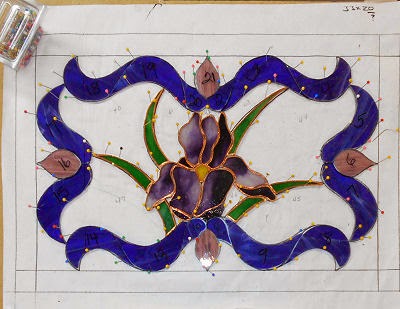 Becky S has her Monogrammed 'C' Window all cut out and ready to be soldered.  In fact, she had soldered the front side of it while she was at home but couldn't do the back side because she still didn't have the border attached.  While she was in class she got her border pieces completed and she's ready to wrap them (which I'm sure she'll do during the week).  I love her border glass which is a textured series of squares that line up perfectly with the bevels that she's using in the corners. 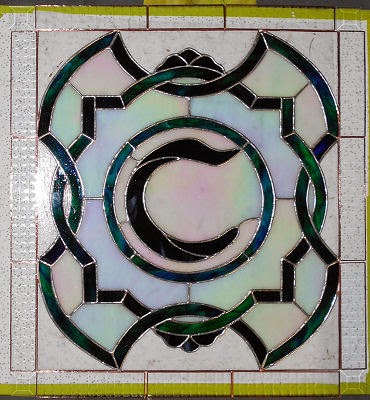 And last, but certainly not least, we take a look at Jeannette's Grape Window.   She's got all the hard parts completed since she has two clusters tacked together and her third cluster all cut out.  Once she gets that last one tacked she can move on to her background which consists of about 20 pieces of glass. There are a lot of pieces in this window but once this is hanging up Jeannette will be happy that she went the extra mile and didn't cut back on the grapes.  All that extra work will easily shine when this is completed.

Coming soon we're going to have a little test that you can take to learn just what needs to be ground to make your glass pieces fit specific shapes.  I could go into detail but I'll save that for the actual test.  Oh, and if you're a student and you don't get a passing grade you have to do sit ups for us!  ;-)