It's been one busy week here in the shop and we certainly have plenty to look at so let's jump right on into the thick of things by looking at Cindy's completed Magnolia Lamp.  You have to admit that it turned out wonderfully.  She was unsure about the soldering but in the end she did an incredible job working on this 3D project.  Soldering a lamp is never easy-- you have to adjust the lamp before you solder each line and then getting there's the part where you want the bead to look good as well.  The straight grid work sections weren't a challenge at all for Cindy and although the curved lines around the flowers proved to be considerably tougher I have to say that she tackled the job with a healthy amount of determination this week when it all paid off.  She has no clue how well she did only because it was covered in flux when she quit.  With a quick bath her lamp turned out perfect! 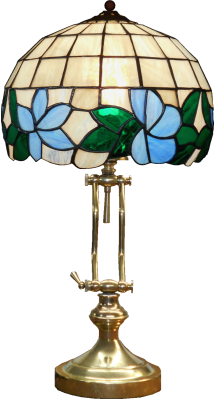 Betty completed her Three Wise Men Window and it's a perfect match to her Nativity Window in both size and glass.  She's really done a great job on this and her soldering ability has improved immensely.   I think I might have touched up three or four joints and that was it.  I can't find anything to fault in this window.  Will she make a second one?  She usually works in pairs so time alone will tell. 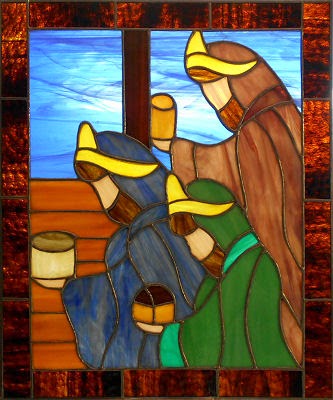 And Terry's latest window is another showcase of her excellent workmanship.  I always say that a symmetrical window is the toughest thing to do because any variation from the pattern is readily apparent to even the most untrained eye.  But Terry made this look easy.  And her choice of glass for the folds in the ribbons is nothing short of perfect!

Linda F managed to get all of the white lettering cut out for her Coke Window and has begun grinding her pieces.  Since the while glass matches the pattern paper underneath it you can't see much of a difference between this photo and the last picture I took but there has been a lot of work done here.  Next you'll see it all start fitting together and I can guarantee that this is going to look great when it's finished. I won't be surprised to see someone else make this later on down the line.

Ann got not one but two Fleur De Lis' cut, ground and tacked together while she was in class this week.  I have to commend her on her speed on these.  She's going to be cutting out background glass next week and I have no doubt that she'll get those backgrounds ground as well. Ann has really been on a roll lately.

Myrt has three of her four sections not only tacked together but completely soldered as well.  That just leaves this last quarter section to go which means that we'll be seeing these completed when she returns.  These are really going to make the plain little circle window they're going into come to life! 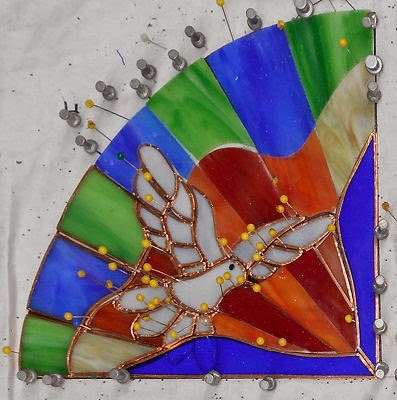 Becky has the front of her Monogrammed C Window completed and has taken it home with her so she can solder the back side.   Meanwhile, she's begun working on a Cross Suncatcher and a Sunflower design-- both of which she started cutting out while in class.  And by the time she left she had everything cut and ground.  It will be interesting to see what she walks in the door with next week.  I can't wait to get a picture of her C window and anything else she might have finished when we next see her.

While this pattern was hanging on the wall waiting for Paula to come in and start working on it everyone was asking me, 'Who's making the Scissors?'   And now they know.  At any rate, Paula is starting her Christmas gifts early this year and that means that she'll be avoiding the stress that occurs during classes in December.  A head start on gifts is ALWAYS a good thing.  And I think these scissors already look great!

Martha's two Stylized Fleur De Lis Windows are moving right along.  She has one of them completely cut and ground and the other just needs a border and a replacement piece of background.  Let me state for the record that Martha didn't break the background piece-- I did!  I was sure I could get one of the inside curves a little closer to the line and the next thing I knew it was dead on the floor.  I should have known better.  :-(   But we'll easily replace that when she comes back in to get a second border attached.

Mary Grace has all but the outside edges of her background cut out and ground which means that she's just 16 pieces away from adding her borders!  She's a little leery about those remaining background pieces but they won't be hard at all since none of them are small.  The only thing that she needs to be sure about is keeping a straight edge and, as always, there's a simple trick to that which we'll reveal when she starts cutting them.

Janet's Rooster Window is ready for tacking!  She wrapped most of her glass this week and has decided to add two more borders to make it fit the window it's going to hang in better.  I have some idea's for the double border that I'm going to run past her when she comes back in so brace yourself and possibly expect something slightly different when you see this again.

Rowena has one small cluster of grapes left to go on her window and then she'll be ready to work on her background glass.  Although her window looks similar to Jeannette's Grape Window I need to point out that Row's grapes are about half the size which makes grinding them a pain in the butt to say the least.  But she's handling it like a trooper and her determination is really paying off.  And I always say that once the grapes are done the rest is a piece of cake,.

Brenda had a slight issue with her Baby The Dog Window during the week when it slid off of the board she was working on.  She had to redo a lot of the glass that makes up the name but luck was with her since only one piece of glass broke on the actual dog itself.  She's got just about everything repaired and even has the majority of it wrapped now.  I suspect we'll be seeing a border go on this project when she returns.

This week Terry came in with a completed window and  another symmetrical  pattern all drawn out.  She's begun cutting out the glass for this stylized Cross design and it looks like she's got things moving along nicely already.  I'm not sure if this will hang as is or if it will be framed out with background glass and a border.  I guess we'll all find out when she returns on Tuesday. 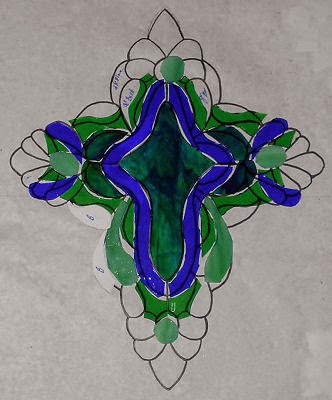 Jeannette's grapes are officially cut, ground and tacked together.   She's already got her background picked out and the pattern lines have been marked.  We'll definitely see some background glass fitted to this when Jeannette returns in two weeks.  Meanwhile, we all wish her daughter the best wedding that she can possibly have this week!

With her two borders now attached to her Tabasco window, Carol began the job of soldering.  The front was completed by the time she left class and her plans are to finish the back side of this window while she's at home.  I can't wait to see this hanging with the sun shining through it because it looks GREAT already!  All she's going to need to do next week is add the Tabasco label (which is done correctly now) and give this window a bath. 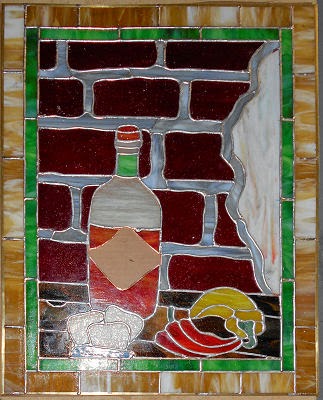 Linda L has all but the top 5 pieces of her Mickey Mouse Window all tacked together.  We changed the color of the bottom of her ship to a very light grey to give it some contrast against the top section of the ship.  And now that it's been replaced everyone agrees that the change was for the better.  Linda will be working on blue skies and mountains when she comes back in and she'll surely complete them during class.  Then comes the fun part-- picking border(s). 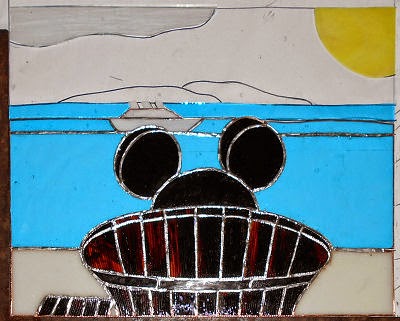 Bonnie ended up having to add a border to her window when we discovered that without one we didn't have anywhere to add the hooks.  But truth be told I think it looks much better now anyway.  So Bonnie got her border attached along with her brass channel and then completed soldering the front side of her Horse Window.  What you see below is the back side all ready to get soldered which she plans to do at home. 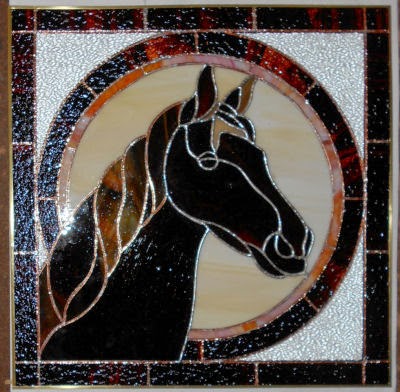 Again, there's not much to see when we look at the work Lynn accomplished in her last class.  Don't misunderstand me, it's not that she isn't doing anything-- it's just hard to see what she's done since it's all clear glass.  It's sort of like trying to take a picture of Wonder Woman's Invisible Plane!  But she's making great progress and on that you'll just have to trust me.. . 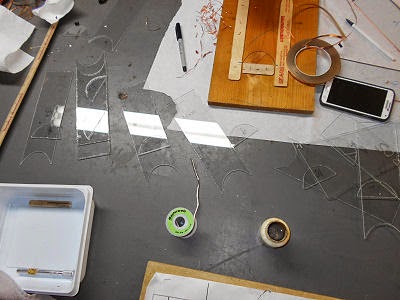 And now that we're at the end of our update we'll take a look at the latest Mermaid Window that Shelley will begin working on.  It's sort of a family portrait representing Shelley and her two sisters but we aren't going to say who's who.  At any rate, Shelley traced out her pattern and will most likely begin cutting glass when we see her again next week.

And that about wraps things up.  Be sure to check us out again next Tuesday because it looks like there's going to be plenty of completed projects!