I want to take a minute to remind everyone that any project you make will only ever look as good as the pattern you use to cut out your glass.  If your pattern has been traced with crooked lines, your circles look like irregular hexagons, and your curves have more points than a drunk driver's license then you're already headed towards a long hard struggle with your project.  Take your time while tracing out your patterns and you'll discover that your windows will start fitting together far quicker you could ever imagine.  You can't rush quality, only quantity.

Cindy's Cat Tails Window had a bit of an accident while it was traveling.  It seems that an old console TV was in the back of her car along with the window and (yep, you guessed it) they collided.  Can you guess who the loser was?  Yes again, it was Cindy's window that came out of the car worse for wear.  I believe there was 6 breaks altogether on the left hand side that Cindy repaired completely by herself during class.  And when it came time to  call it a night she was had the window whole again.  Nice work! 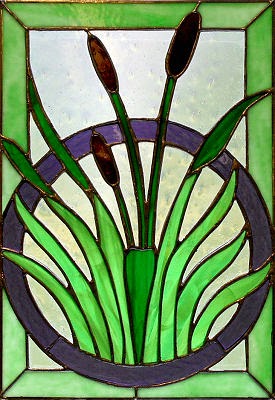 Ann's first of two Fleur De Lis Window is officially completed and she has the second one ready to be washed and colored (so I know we'll see that in our next update).  Hopefully I'll get some sunlight behind the second one because the florescent lights illuminating this window are throwing the colors off.  That said, it still looks like a wonderful to me. 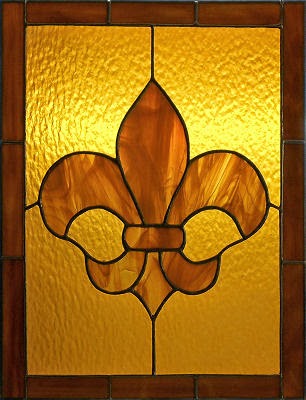 Terry's Geometric Cross has now been  completed and her choice of green and blue makes it the perfect addition to the room this will be hanging in.  I always love her attention to detail and the symmetry of this window is the thing that makes it so stand out to me. 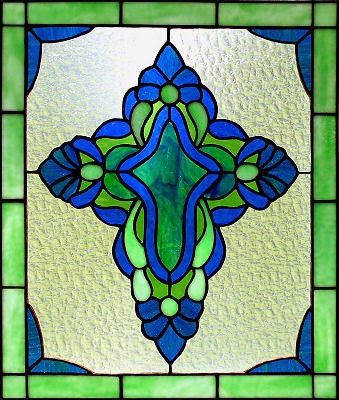 This window that Brenda made in tribute of Baby the Dog turned out great.  Careful use of shading prevented the dog from becoming one black mass of glass without any depth.  The glass is all cut from the same sheet, but properly utilizing the light and dark sections gave Brenda this  lifelike rendition of Baby. 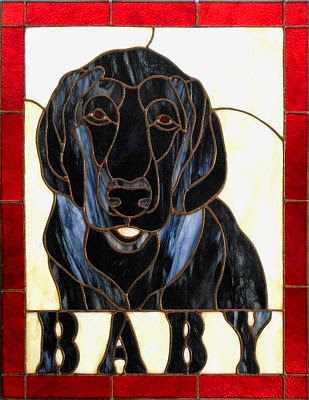 Paula now has a grinder at home and she's not wasting any time using it to its full potential.  She's a regular stained glass addict now and is making projects on her own at an impressive rate.  This angel was done completely outside the shop without any guidance from me whatsoeve.  And just look at her work which is amazing.  All I did was show her how to add a hook so she could hang it and then she washed it and I took this picture.  Paula is really a stained glass force to be reckoned with and has only been with us for three sets of classes! 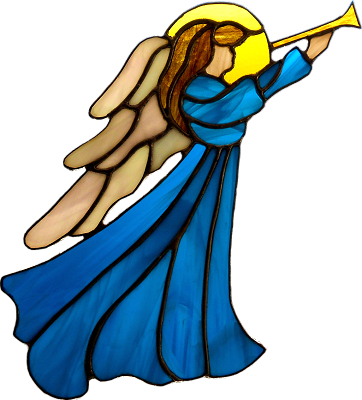 Coming to NBC this Fall, you won't want to miss "Shelley's Mermaids".  These three ladies may not have legs but they can certainly get down to the bottom of things!  But seriously, Shelley has a major portion of her Mermaid window cut out already and it's fitting together nicely already  With just two color of glass left to cut out and then some clear glass bubbles, this window is moving along quickly for her.  Before you know it Shelley will be grinding. 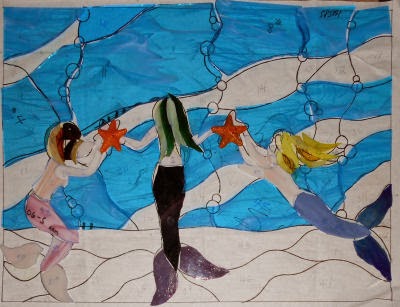 Ann not only worked on her Fleur De Lis Windows-- she also cut out the B section of her latest Initial Fleur De Lis Window as well.  We made sure that there weren't any incredi-cuts (yeah, that word only makes sense if you do stained glass yourself) in this initial like there were in her last one which required a lot of precision grinding.  That doesn't mean that this isn't going to look good however as the next two or three weeks will prove to you. 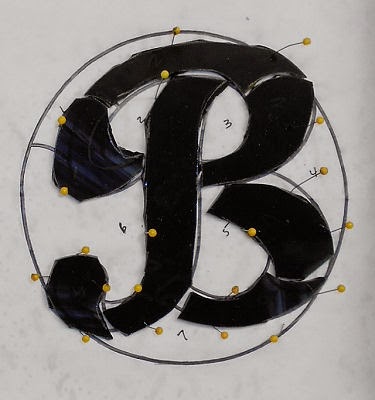 Bonnie's Magnolia Window already looks great even though it isn't completely cut yet.  There are only a few background pieces left to go and she's kind of on the fence trying to decide if she wants to add a border to this or just go around it as it is with a  zinc channel.  Either way will look great which means that it will all come down to her personal preference. 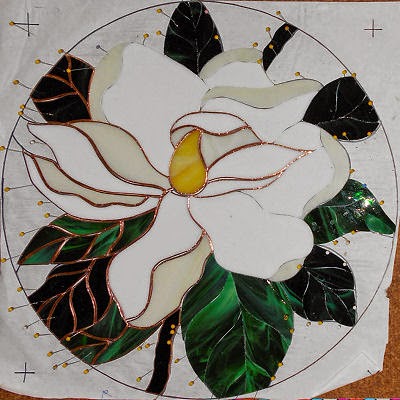 Becky's Autumn Leaves are just about complete.  She decided to go with a double border and went with autumn colors for them as well (hence the name 'Autumn Window').  With just the last border to attach she decided to cut out the leaves and flower pieces to a window that will end up surprising me because I don't believe I have any clue as to what it is.  I just love it when a student surprises me!

Carol has the first of her four Butterflies completed and the second one is ready to go.  She picked out glass for the remaining two butterflies which are a different design and slightly smaller.  These secondary butterflies will hang under the larger ones and actually attach to them by small chains.  I have a feeling we'll be seeing them completed soon enough.

When Brenda finished her Baby Window she moved on to cutting out the letters for two Initial Windows.  They'll be 12 x 12 when finished, one sporting a Z and the other a C.  She also has an M pattern ready to go but didn't have enough time in class to get to that one--yet!  What lovely penmanship she has, don't you agree?

Janet resumed work on her two Beveled Cross Suncatchers and now has them ground, wrapped and tacked together.  She'll be soldering these at home so I'm fairly sure we'll see these finished when she comes back in.  Once she got them tacked together in class she moved on to an Angel Window that she traced out and then cut the pattern for.

And Jeanne has a lot of her pieces cut ground and wrapped in her Stylized Cross Window.  She's begun cutting out the red accent pieces that sit on the end of each of the four limbs of the cross.  I have no clue what color she plans on putting in the center but I have no doubt that she'll make the correct decision.  Her choice of colors has always been a strong point in her work.

Mary Grace has the front side of her Iris window soldered and will be moving on to the second side when she comes back in next week.  With a little luck she'll have this completed and all of the other students that have been eying up this project will get to see it in all of its glory.  I think it already looks great even on the table!

Linda L's Mickey Mouse is all cut and ready for solder!  We sort of cheated and held the window up to take a look at it with some light behind it and I must say that Linda should be proud of her work.  The grain to the wooden chair that Mickey is sitting in has been cut perfectly and you completely buy the 3D wood effect that Linda  was striving for.  If you do stained glass never forget that grain matters. 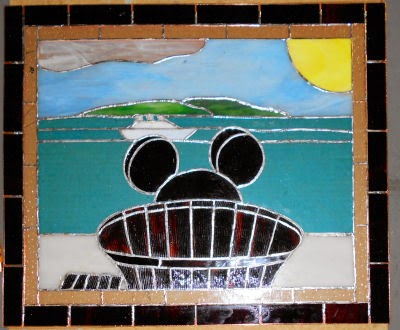 Rowena's got all of the glass cut and ground in her Grape Cluster Window so that leaves her with some soldering.  She's a little concerned about that aspect of the stained glass process but the majority of the window consists of small lines which are always easy to solder.  I'm sure she's going to do wonderfully and soon enough I'll have the pictures to prove that I know what I'm talking about.

Jeannette has her own version of the Grape Clusters Window and it's ready to have its final border attached.  I have no doubt that she'll also begin soldering this when she returns because a border takes no time at all to attach.  The hardest part of adding borders is wrapping them in copper foil and Jeannette has that down pat.

Myrt started working on this Outhouse Window which is more involved than you might think because the wheel of the wheel barrow is made out of nothing but lead lines.  This means that precision cutting is of the utmost importance.  I have no doubt that Myrt will handle it perfectly but we're going to have to wait a bit before we see that because the bevels she's been waiting for have finally arrived for the transom window that she'll start when she returns.  We'll have more details on that next week.

Lynn's Terrarium is together and she's begun the arduous task of soldering this beast!  It's only difficult because of the size of the terrarium and the fact that she has to readjust its position after every line is soldered.  There's still the top to add to it but that won't get tacked together until the bottom is 100% complete, this way we can assure a perfect fit.  A lot of people have been watching this project not understanding how it would look and I think it has completely taken shape now.  Maybe we'll see a few terrariums being made soon! 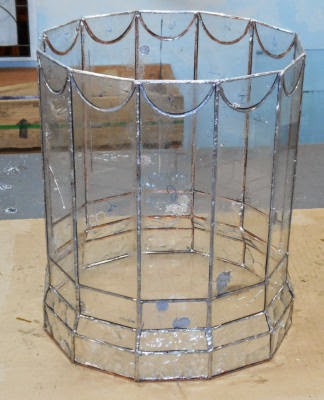 And that about wraps things up again.   Jeannette and Rowena attended class on Thursday and then came back in on Saturday and Sunday along with their friends Loretta and Angie to attend another of our Weekend Workshops.  They all did very well and I promise to show you exactly what happened during that particular Workshop when we return (sometime before Saturday).  So expect that extra post any day now!

Posted by Bayou Salé GlassWorks at 1:49 AM