I'm running very late with this update (our new week of classes begins in less than an hour) so we're just going to jump right into things this week.
Well, I must say that I've been impressed with every aspect of Linda F's work on this Coca-Cola Window that she completed this week.  Not only did she handle the deep inside curves but her soldering has hit a high point as well.  And when I say a high point I mean, "By Jove! I think she's got it!" Soldering is something that comes on its own to a student. It's all about understanding how to angle your iron, when to add solder and when not to, and when you should push the solder and when you should just let it flow off the iron. And then there's the whole speed limit thing. At any rate, Linda has it! What you see is below is Linda's soldering-- I only touched up a few joints. Color me IMPRESSED!

Janet wasn't exactly thrilled while she was making these crosses because as simple as they look (with just 8 pieces of glass) they can certainly cause a lot of stress and heartache when you're trying to get them to 'even out'.   Symmetry IS a beach!  But Janet never gave up and her finished crosses are very lovely indeed.  And I do want to stress to Janet that each one gets easier and easier.  The good news is that I never once had to tell her to adjust her curves which is the biggest problem that first time cross makers have with this pattern.  Way to go, Janet! 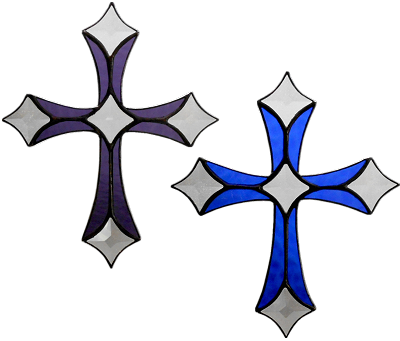 Ann completed her second Fleur De Lis Window and I even managed to get a picture of it with some sunlight behind it.  Last week we saw an identical window that Ann finished but the fluorescent lighting I used to light it up really threw off the colors no matter how hard I tried to adjust them.  That's always the case with amber colors and certain purples-- they don't light up correctly if there isn't sunlight behind them.  But this picture captures Ann's wonderful window perfectly. 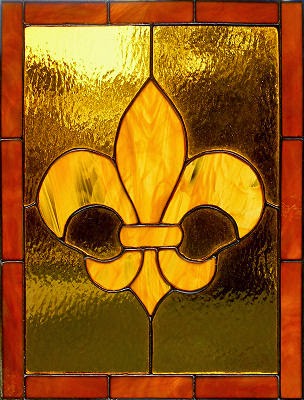 And just because Ann completed a window doesn't mean that she wasted any time in class.
Au contraire, she's begun cutting out this (somewhat familiar) Fleur De Lis Window. Or should I call it a Fleur De B? As you can see she's making excellent progress with it! And Betty now has her Octagonal Iris window completed save for the soldering.  She took great care to make sure that the flow of the glass lined up in all of the water pieces which is really going to pay off when you see this lit up.  Hopefully that will be in our next post!  And after agonizing over the color of the border I have to say that I don't think she could have found a more perfect glass for the job. 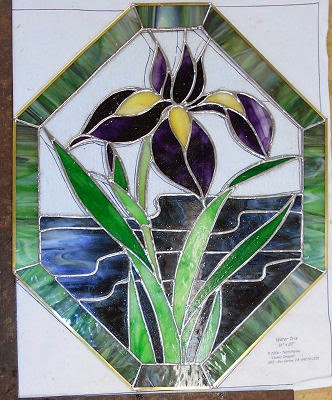 There are only 5 pieces of glass left to cut on Susan's Abita Beer Window and then she'll begin soldering!  The round beer bottles attached to the window perfectly and 4 of the missing 5 pieces will act as 'locks' (for lack of a better word) to keep the bottles from popping out later on down the road.  I love her inner border and then the return to her background glass for the larger outer border.

Becky S resumed working on her Autumn Leaf Window and now has the front side completed.  She also cut out three sunflower designs and got one of them ground and ready to be wrapped.  Becky doesn't sit still much!And her work is perfection itself.

Bonnie got her Magnolia Window all wrapped and tacked together now.  She's picked a frosted glass for the small background pieces and has decided to square this out instead of making it round.    I may try to talk her out of that though.  Come back next week for all the details on what is sure to be an interesting debate! 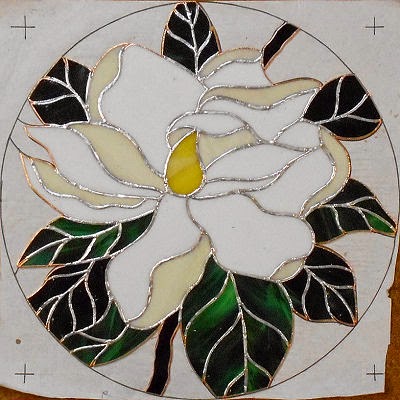 Carol has gone butterfly crazy!  She has four of them completed now and plans on making two more smaller butterflies while she's home during the week.  When she comes back these should be finished and hanging, some of them even from each other.  If that doesn't make any sense now it certainly will next week when you see these in their final stage.

I hope no one here embarrasses easily because what you're about to see is Mickey Mouse's backside!  Well, it's not nearly as bad as it sounds because Linda L has completely soldered the front of her Mickey Mouse Window and is now working on the back side.  And I think it's a fair assumption to say that this will be completed when she returns (tomorrow). 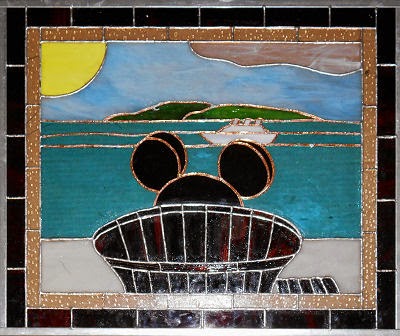 Paula's Parrot window is coming together beautifully.  She's decided to make this a window rather than a large suncatcher so she's going to  put this into a rectangle of glass and then add a border to finish it off.  I love the colors she's using on this and I don't see how this window can't look anything but great.

Brenda has two of her Monogrammed Windows just about completed.  They're all cut, ground, wrapped and tacked together so there's a good chance these will be completed when she comes back in for her next class.  Oh, and thanks for the Beats Brenda and Donald-- I don't care what Terry says about the two of you!  :-)

Shelley has almost all of her Underwater Mermaid Sisters cut out.   The only thing left to go are all the small bubbles, and a small mound of sand on the lower right side of the window.  It's safe to assume that she'll be grinding this when she comes back into class next week.  And FYI, the white diagonal stripes of white are a slightly different textured blue that still forms water which are all cut out but Shelley had forgotten them at home. 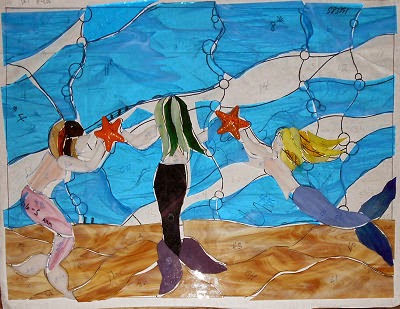 After completing the last crosses that she claims she'll ever make, Janet decided to make this Stained Glass Angel that I haven't seen completed in a while now.  It's about time someone made one of these because it's always been a favorite pattern of mine.  It's almost completely ground now so it's safe to say that Janet is making short work of this. 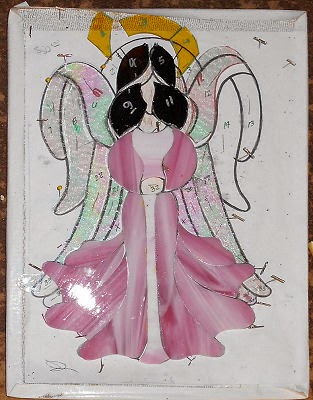 Jeanne has the red accent sections of her Stylized Cross Design cut out and she's even begun grinding them to fit.  She's really doing great work on this window and I know it's going to look great when it's completed.  I don't think it's going to be too long before she gets this tacked together and then starts cutting her background glass.

Jeannette's Grape window is all cut, ground and tacked together now.  This week saw her add her final border and once that was completed she began soldering her front side.  When she comes back in she'll resume her soldering and then move to the back.  Sadly, I don't think it will be completed next week (there's a lot of soldering in this project) but I have no doubt that it will be finished the following week.

Then we have Rowena's Grape Window which is somewhat smaller and has less pieces which means that she was able to get the front of her window completely soldered after she attached her double borders.  She'll be working on the second side when she comes back in and I have to confess that I picked it up, held it up to the light and was blown away by how great this window looks.  I can't wait until Rowena gets a look at this when it's all cleaned up and has some light behind it.  The purple border is perfect!

Terry, as always, has managed to put her own twist into a pattern that we've seen twice before.  She's replaced the Humming Bird with one that she drew out from a book making this window distinctly hers.  But that's something that Terry always does!  I also love the lightness of the leaves and border. 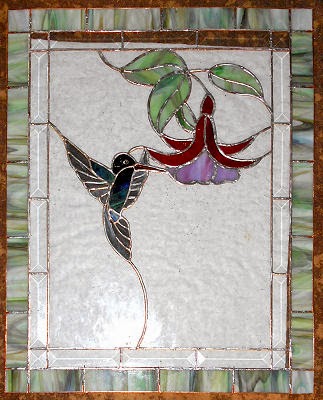 Cindy has begun working on her Calla Lily Window and has her colors all picked out.  She's a grind-as-you-go kinda person so no glass rests on the pattern until it's perfectly ground and fitted.   This is one of the reasons Cindy's windows seem to get completed overnight-- When she's completed her cutting the only thing left to do is foil and then solder!

And lastly we have a look at the window(s) that Myrt is working on.  It's one design but done in three separate sections.  She has almost all of her bevels wrapped which means that she'll most likely begin drawing her pieces out onto her glass when she returns.  She's missing a few small bevels but they arrived in the shop by UPS on Saturday so everything is full steam ahead!

And that's it.  In less than one hour our classes for this week will start again and I'll be there to document it all!