Get My Pickle Out Of The Back Seat

We had another one of our quarterly Weekend Workshops this past weekend and as you will see it was very productive.  We had four students join us on Saturday and Sunday and in the span of two (long) days they managed to create the four beautiful windows that you see below.  Read on to learn their story. 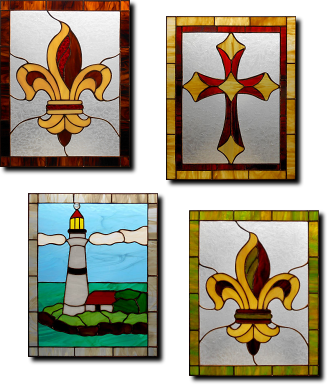 Angie, Megan, Natalie, and Roxane arrived at 9am and we immediately set to work starting with a lesson in cutting glass.  I have to say that it went very well because no one had any problems using their cutter or the pliers we use to break glass.  About an hour later after everyone had successfully cut their crescent moon shape we handed out the patterns that each of the students had picked and began working on actual windows.  We're going to start things off with Natalie's window which is a Fleur De Lis.  She started cutting the easiest pieces first and progressed to the hardest cuts at the very end. Here you can see the actual Fleur De Lis is all cut out and waiting for its background to be cut. 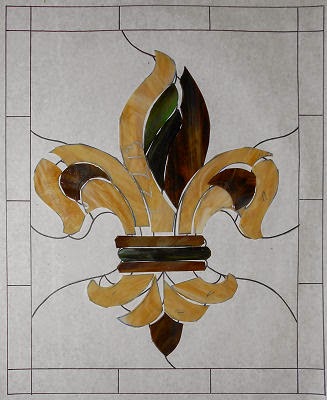 Once the background was all cut out Natalie used the glass grinder to go over all of her pieces to ensure a perfect fit.  When that was completed she needed to wrap all of her glass in copper foil which you can see surrounding the edges of most of her glass in this picture. We ended our first day at 6pm just as everyone finished wrapping all their glass pieces. 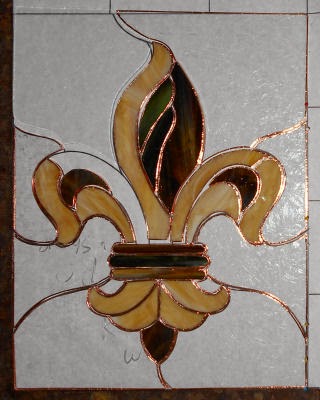 When we regrouped on Sunday, Natalie used a soldering iron to 'tack' together her window before she added the border pieces to it.  For the border she used the same green glass that she used as accent pieces in the actual Fleur De Lis itself.  Once the border was attached the rest of the day was less hectic as Natalie only had to put a finishing bead on both the front and back side of her window.  Doing this required her to sit down, relax, and take her time. 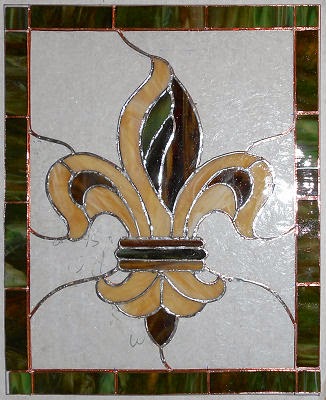 And here's Natalie's completed window with a little light behind it.  It's amazing what a bath and a some back lighting can do to change the appearance of these projects.  I've had students swear that they hated their window only to fall in love with it once it was cleaned up.  Natalie did a great job and she should be proud of what she accomplished in just 2 days. 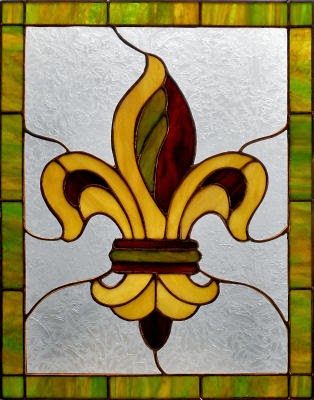 Next up we take a look at Megan's Lighthouse Window.  Here's her pattern with about a third of the pieces cut.  This pattern concerned me a little because it has more pieces than the other projects that were being working on, but Megan did a great job and never fell far behind the others even though she had many more pieces to deal with. 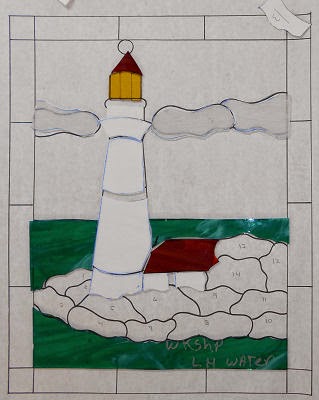 I believe that everyone had all of their glass cut and ground by about 4:30 on the first day (Saturday).  The rest of the day involved everyone sitting down and relaxing as they received a lesson in wrapping glass.  Once they had the hang of it they began wrapping all the pieces they just finished grinding.  The foil has to be put on evenly and smoothly or the lead will look spotty and amateurish.  As you may be able to see (if you know what you're looking for) Megan did a great job.

Megan tacked everything the next day and once that was done she worked on her border pieces which are wrapped but not yet attached the the center part of her window in the picture below.  Once everything was put together Megan began running her final solder bead on all of the copper foil she surrounded her glass with. 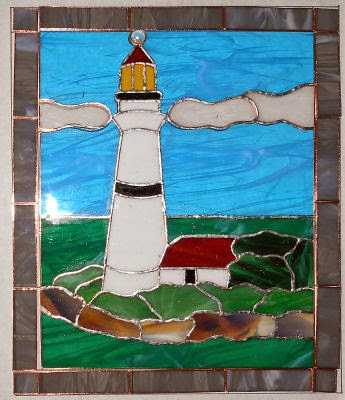 And here's Megan's finished Light House Window.  She loved the part where she magically turned the silver lead into copper with a chemical called Copper Sulphate.  Me, I loved how impressed she was at having created this window all by herself. 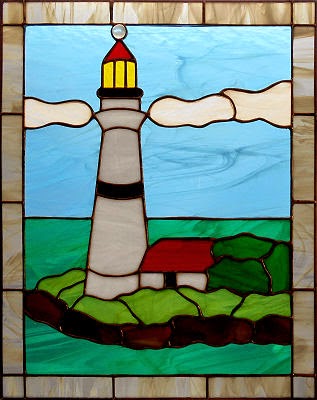 Next up is Roxane who made the same Fleur De Lis Window that Natalie made but with a very different color scheme.  Here's the majority of the actual Fleur De Lis cut out.  Even without its background being cut out it already looking great. 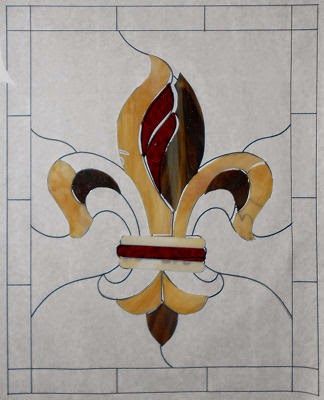 Here we see that Roxane has all of her pieces cut and that she is in the midst of grinding everything to fit.  The bottom portion of her window is fitting together perfectly and the round, red container holds the pins that we use to pin down the pieces she's ground so they don't shift while grinding the other pieces.  You can also see a little bit of the metal square running along the bottom and the left side of the window.  This ensure straight edges and a perfect 90 degree angles in the corner it is currently placed in. 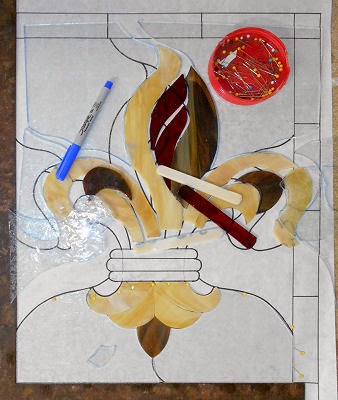 With all of Roxane's pieces ground and wrapped she's ready to begin tacking this together with her soldering iron.  Once that simple step is completed she'll move on to finishing this up by attaching some border pieces. 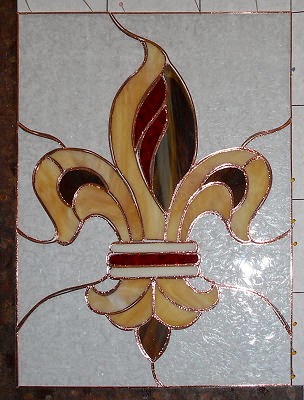 From start to finish Roxane made all the steps in making this stained glass window look easy.  I have to say she's a natural at this having caught on to the soldering process far faster that I did when I learned how to do this way back in the 70's.  How can you not look at this window without being impressed? 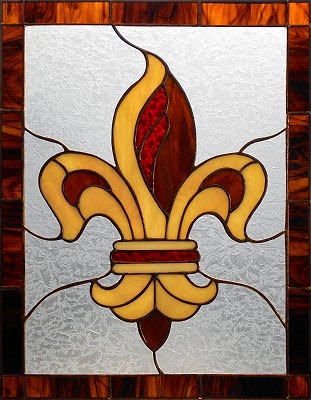 And lastly we have Angie who, if you read the post about out last Weekend Workshop 3 months ago, may be familiar to you.  Angie had so much fun last time that she decided to come back and make another window while bringing some friends along as well (which explains how all of our students found out about us this time around.)   Angie decided to make a double bordered Cross Window and this first picture shows all of the main section cut out and ready to be ground. 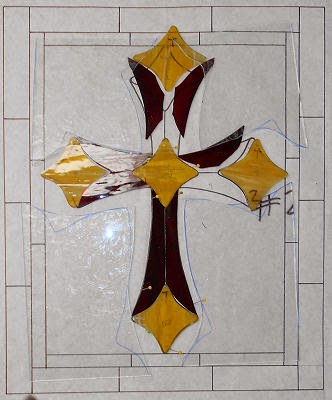 By the end of the first day Angie had her inside tacked and her first border cut and wrapped as well.  Angie retained a lot from her first class with us and she put her knowledge to good use in constructing this window with hardly any problems at all. 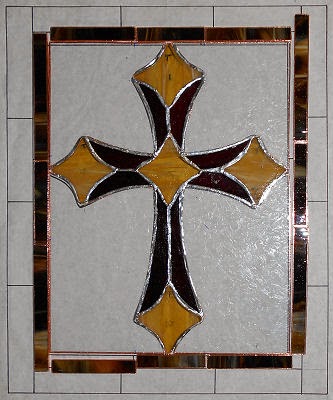 Next we see Angie's Cross Window on Sunday afternoon waiting to get it's final coat of solder.  Soldering scares everyone, but it's actually easy if you just take your time and not rush through it.  If you just give the lead time to melt before moving your soldering iron the lead will automatically form a bead.  And that's just what Angie did. 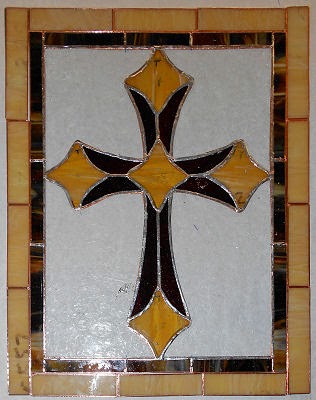 Here's the finished window that Angie made with us.  It certainly looks different that it did in that previous pictures, don't you think?  It always amazes people how different their windows look when they have a little light behind them.  Although the colors may have looked dark and lifeless in the first three pictures, you can now see how vibrant and attractive they actually are.  Angie herself said that she wasn't really feeling it for this window while it was on the table but she certainly has no regrets about it now that it's completed. 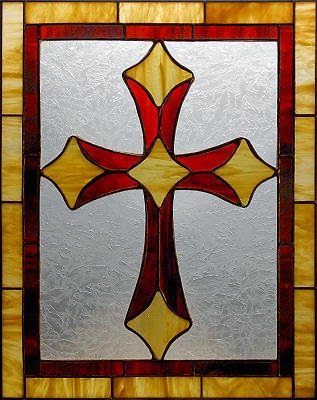 So in the end everyone had a great time even though there was a tremendous amount of work to be done in just two days.  How do I know for certain that they all had a good time?  Well, Roxane has signed on for two more workshops next year and Angie and Natalie have both signed up for another workshop each.   Russ and I had a great time with everyone and really look forward to seeing everyone again.  And I'll bet their next windows will be even better than these turned out to be.  Lastly I want to thank Angie, Megan, Natalie and Roxane for making my job so much fun.  I've found that it's more about the people than it is the glass-- when I focus on the students before me the glass always manages to work itself out.  Thanks again, girls!

I was excited and nervous about going to a Stain Glass class. I was excited because I love stain glass and I was going to get to make one for myself. I was nervous because I didn't know if I could do it or if I would hold the class back. Paul and Russ made the class comfortable and fun. They even had Russell Crow!! We seen him! LOL The food was awesome and the town is lovely! The best part is everyone finishes their work at the same time. Thank you for a wonderful weekend. I can't wait to go back!
Roxane Belanger