Every week someone asks me what direction the grain should run in the square corner pieces of their border.  Truthfully, there is no right or wrong way but you MUST be consistent-- they should all run either up and down or left to right.  No mixing allowed.  I almost always run the grain on my border so that it radiates outward from the window and as a rule of thumb I make my corners match the grain of the border pieces that rest along the shortest end of the window.  You can see this in the diagram below.  (Grain lines are shown as red arrows. )  Again, there is no 'correct' way to do this just as long as all four corners match.

We only had one class due to Thanksgiving keeping people busy at home but we still have plenty to look at so let's get started.

Cindy completed her pair of corner panels and she did a great job on them.  These will mount either in the corners of a doorway (a TALL doorway) or in the corners of a window.  We don't see many of these windows made in our classes but Cindy saw this design in a magazine and rather than saying, "I'm going to order these" she said, "I'll make me a pair!"  And then she did.  Nice work!

Brenda completed her wood duck and did a bang up job on it.   She modified the pattern that Carol had made by adding more leaves and changing the feather patterns to help her use the colors that she wanted to use.  She used black patina on her finished project so the lead doesn't have the standard copper finish.  To ensure a dark finish Brenda let her window sit for a half an hour before washing the patina off.  You can wash copper patina off immeadiately, but black patina should sit on the lead for a half hour to forty-five minutes.  As for Brenda's window, I like it.  In fact I like it a lot. 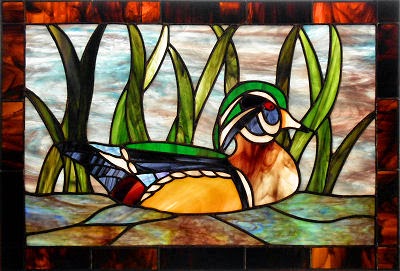 Brenda also made this  wonderful cross window while she was at home and brought it in for some brass channel around the edges and some hooks.  She finished this with black patina also and although I'm not generally a fan of the black I will admit that it works beautifully on both of Brenda's windows.  Especially on this one with the nice clear background. (I do believe that there are certain times when black patina should be used though.)   Brenda doesn't love making this window due to the deep sharp cuts that the background requires to wrap tightly around the pointed bevels but she did a great job on these. 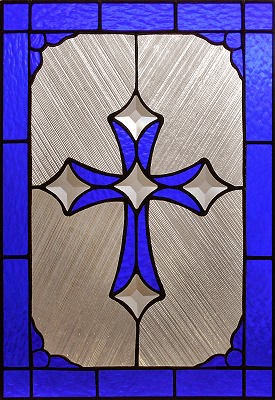 Martha continued working on her Beveled cross and she really impressed me this week.  Not only is she flying through this pattern (all her glass is cut) but she remembered a 'hack' that I showed her about grinding out the pointed sections on each arm of the cross.  Brenda, Terry, and Cindy were all amazed at the way Martha dealt with the most difficult cuts in this beautiful (but challenging) window.  It looks to me as though Martha will be back to work on her Iris and Dragonfly window very shortly. 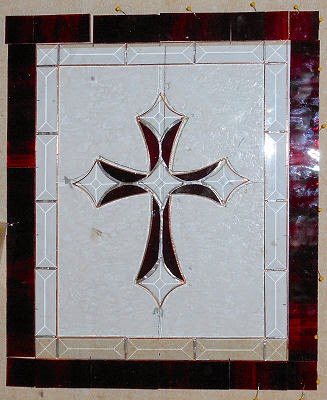 Terry resumed work on her Kaleidoscope Window this week and decided that the border she had cut out last week was far too pastel for the rest of the window.  The color she replaced her original choice with is, in my humble opinion, perfection.  She has the front side of this soldered and and the brass channel tacked into place.  I'm sure that she'll begin soldering the back side while she's at home so I suspect that we'll see this window completed when she comes back in. 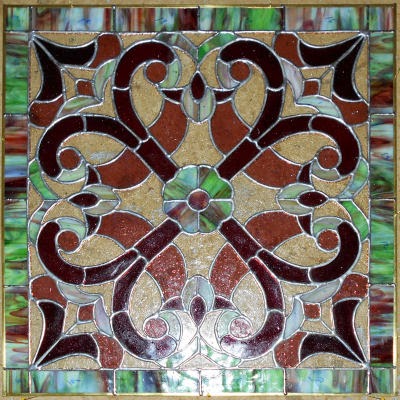 Myrt finished wrapping the left side of her center portion of the Transom windows that she's working on and then tacked it together.  One of the pieces is a little short so we're going to re-cut it next week. If you look closely you can see how the actual bevels are off when compared to the pattern drawing.  Never count on a bevel matching it's pattern.  Every bevel is off at least a little bit and some can be off by a quite lot.  That's why I always retrace my pattern with the actual bevels I'm going to use onto the window.  Myrt will start the right side when she returns next week.

Cindy has also begun working on her Perched Birds Window Hanging this week.  She's got the two smallest birds done (the tough ones) and will complete the rest after she makes a butterfly Window (that I forgot to draw up for her this week.  Ouch!)

So, like I said it was a short week but that made this post very easy to accomplish.  Since it's finished before the weekend we're going to have a special edition featuring some of Russ' glass fusing.  See you then!