An Evinrude in a Cesspool


I'm late!  It was a busy weekend and I didn't get a chance to write anything until about an hour ago.  Because of that our tip isn't going to be what I originally planned (because I never got the example images drawn up).  I mention this only because I had told two students to check out our tip on the blog this week and now that one's not here.  So look for the tip about straight lines next week.

This week I'll state something that really needs to be mentioned.  When you're grinding glass you should ALWAYS pay attention to the water level in the grinder.  If no water is coming up onto the grinding wheel you're not only decreasing the life of you wheel but also grinding longer than you have to.  Water helps carry away the ground glass and also acts as a lubricant which will stop the rough grinding surface from being scraped off of the wheel.  Also, if you're using a sponge behind your wheel (and I recommend it even if you have a spongeless grinder) don't forget to wash out the sponge when you see that it's filled with glass grindings.  Rinse it under running water and keep squeezing it out until it's soft again.  This will make your grinding go much quicker.


Okay, so with that out of the way let's look at Cindy's Geometric Suncatcher.  It's fairly large (about 10 inches around), has a ton of tiny pieces in it (a Cindy trademark if there ever was one) and has a really nice antique look about it.  I normally prefer to use copper patina on windows but I recommended that Cindy use black on this project and I know it was the right choice.  Beautiful. Betty's second Nativity scene (in this design variation) is another flawless window.  You can't even tell where I screwed up one of her pieces of glass because we positioned the new piece in endless positions until it matched perfectly and then cut it to fit my screw up. 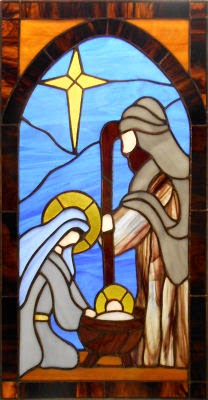 Linda F's Wise Men Window is officially completed and as I've come to expect from Linda, the work is wonderful. But I am just dying to see her get started on her next window.  The pattern will really knock your socks off when we reveal it next week. 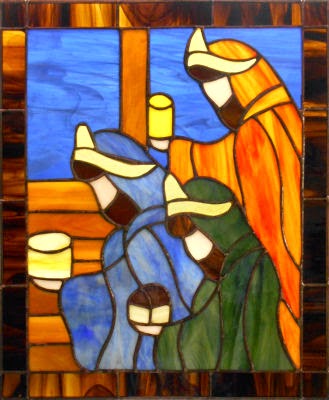 Wow, it seems like forever since we last saw Jeannette but that's only because she was out of state and then we had the two weeks of holidays.  Even though it's almost been a month she was here she made short work out of these two cabinet door inserts.  Started and completed in one class, Jeannette really went to town on this pair of windows.  The frames that these are in have only been coated with primer so the color of the wood will change before she installs them. 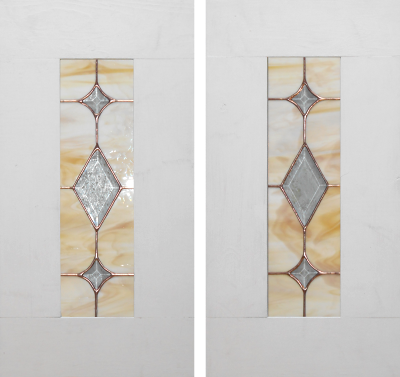 Sue is our newest student and this is her Butterfly. She's calling it a Mardi Gras Butterfly because it was done in Purple, Green and gold.  I'm calling it perfect because that's what her cutting and grinding was.   And even though she's done this before I think she walked away from her first class with us with at least a few good tips on how to do things a little easier. 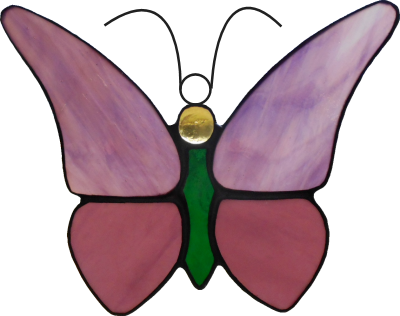 Jeanne's Fleur De Lis Suncatcher was also completed this past week and she did a wonderful job with her soldering.  She worries about her work but I'd say she's doing just fine. 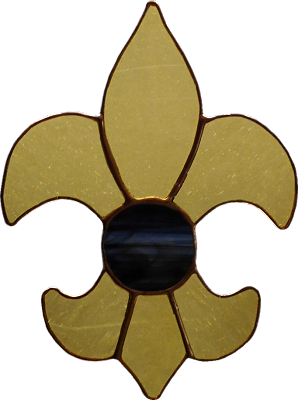 Paula's second Flower Hand Mirror is every bit as perfect as her first was.  I loved the vibrant red she used in her first one, but I really like the soft pink of this one.  Paul's attention to detail really paid off in this because her flowers flow nice an smoothly.  Paula will begin working on a much larger project when she comes back in and I can't wait to see it get started. 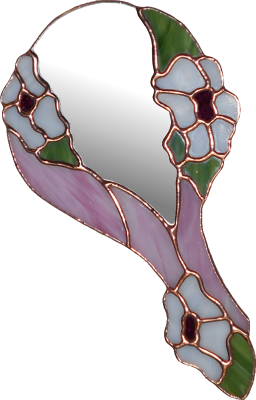 Terry's Flying Pig is, well, a flying pig.  I'm not sure what else I can say other than the fact that Terry is one of our best students who can even make a flying pig look wonderful.  I wonder what the wingspan is on that thing?  Oink, Oink! 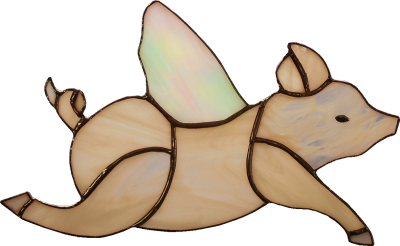 Ann has her latest Fleur De Lis Window well underway.  In fact, once she gets the border on this I can't imagine that she'll take long to solder it at all.  Although it's hard to see while it's resting on the table, it is a Mardi Gras Fleur De Lis colored in purple, gold and green. And don't you just love the background glass she picked?  It even photographs well while it's resting on the pattern (which NEVER happens!) 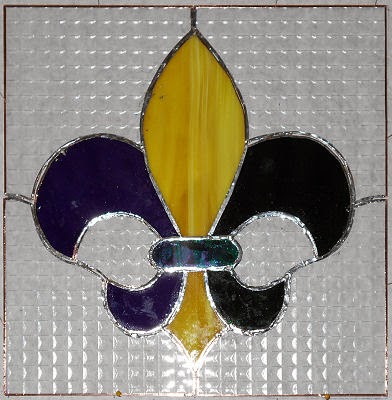 Becky S has her Fancy Fleur De Lis Window all completed save for it being washed and colored.  There's no doubt whatsoever that this will be showcased in our next update.  Becky also worked on a new Sunflower Window while she was at home and managed to get her background cut for it this week as well. 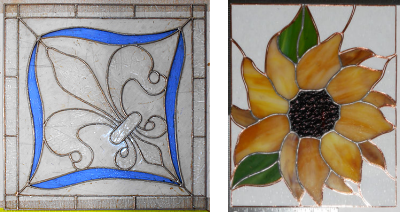 Bonnie's repair on her LSU Window is well under way.  She's decided to forge on ahead and continue working on this monotonous repair.  I'll bet she can't wait until it's finished so she can start working on her Owl. 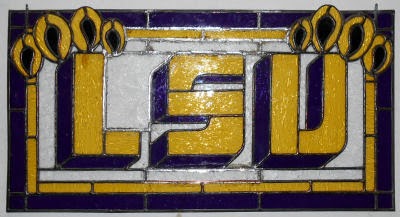 This is the second full size window of Brenda's four Transom Inserts.  When she brings this back in she'll get her border cut and then she'll can either solder it or move along to one of two remaining windows in the series.  I have to say that I like the look of these.  Her choice of frosted glass really makes the bevels stand out.

Cindy's latest window is an Anchor with Crabs.  When I drew up the pattern I made a small but somewhat obscure mistake when I was erasing lines and finalizing things with my black Sharpie marker.  Cindy looked at the pattern and instantly said that she was going to make one change.  When she showed me what it was I was thrilled that she saw the mistake so quickly which involved one of the crab's claws not wrapping around the anchor correctly.  It's safe to say that Cindy's got an eye for this work. 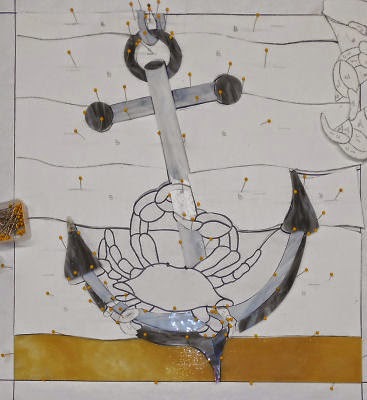 Next we take a look at Jane's Sunflower Lawn ornament.  Although we've seen this before there IS something different about this one when compared to all the others that have been made-- it's much smaller.  Jane accomplished this by simply putting the original pattern on a copying machine and then reducing it until it was the size she wanted. 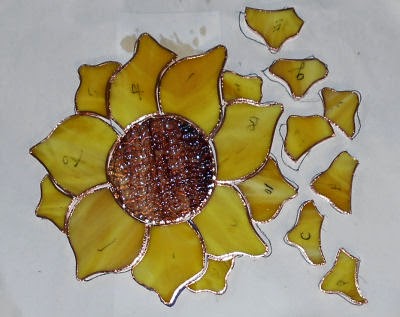 Linda L's Yellow Rose Window is really looking good.  She's using a unique process in making this which involves her doubling up two different glasses so that the water in the vase will show the same texture that the vase has also.  This process requires some extreme fitting because her doubled pieces of glass will need to be wrapped as a single piece.   Look at how quickly she's moving along on this window!  :-) 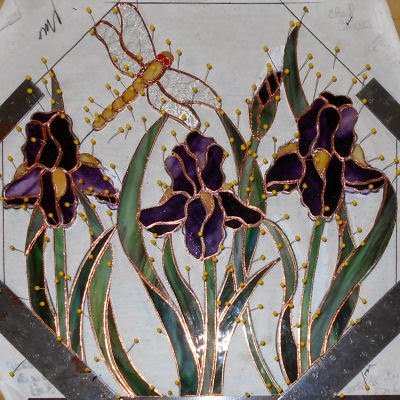 Mary Grace has all the glass cut for her Deer Window including the final outside border which you don't see in the picture below.  She's taken the last border home so she can wrap it, come in and start soldering when she returns.  She was unable to use an beveled inner border due to size limitations  so she cut the inner border out of waterglass which, as you'll soon see,  is going to look just fine. Take me out to the out house,
Take me far from the crowd,
I'll bring some paper and hold my breath,
You'll surely hope that I never come out!
Let me toot, toot, toot,
in the outhouse.
To just pee would be a shame,
Number One!
Two!
No less will do,
At the old out house!


(Sorry, but sometimes I do things like this to see if people are reading the blog) 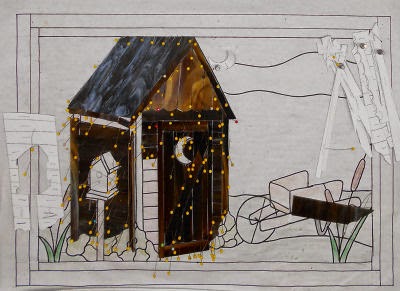 Natalie has her first window just about wrapped up.  That's a better choice of words than I initially thought when I typed it out because the fact is that she only has two more pieces of background to foil (wrap) before she can tack this and then start adding her borders.  And borders, as longtime readers know, always go quickly.  It's looking good and I can't wait to see it lit up. 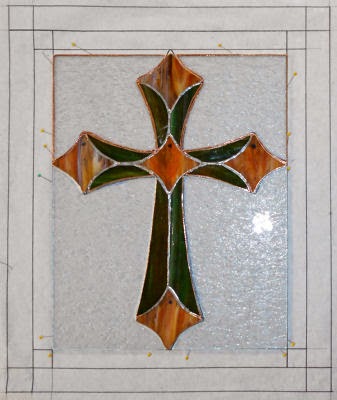 Here's our second Sunflower Lawn Ornament of the week and this one is the full sized version that is being made by Rowena.  You can see that she and Jane were running neck and neck in a race to see who could get theirs done first and they both ended up in a tie getting everything cut, ground, and wrapped.  Perhaps next week we'll have a picture of the two finished Sunflowers together so you can see the size difference. 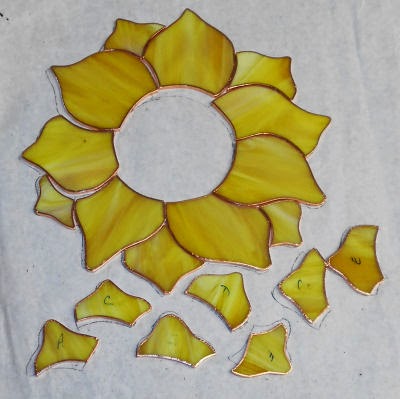 Shelley's Cat Window made HUGE progress this week but she is the first of two students who managed to escape without getting their work caught on camera.  Shelley got most of her cat ground which means that she'll be working on the incidentals of this design when she comes back in.  Sadly, this is  the same picture from last week. :-( 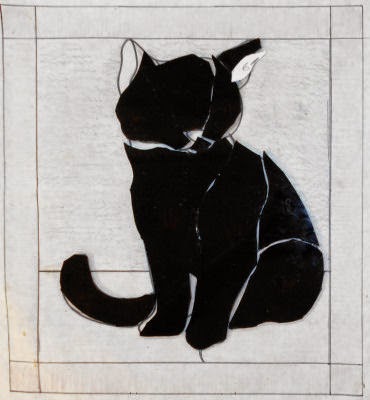 And Susan is making a cross window which she started this week, but which I also didn't get a picture of so I'm showing you her pattern instead.  In truth, I don't think she cut any glass out yet, but I could be wrong.  With a new student in the class I didn't get to spend any time at all with Susan or Shelley which made the class boring and incomplete to me.  :-) 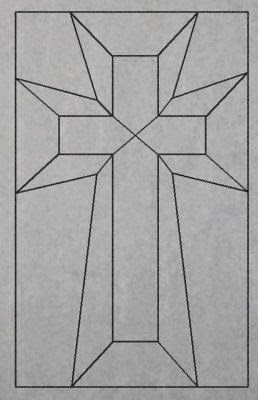 And there you have it. That's all the news that's fit to print. (Unless I forgot something... again) 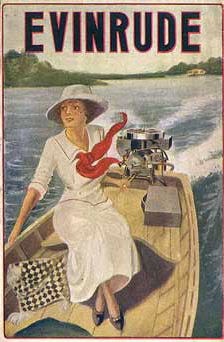