Ok, a lot of our students have difficulty telling the front of a piece of glass from the back (the trick is to catch the glare of a light on the glass and to also look for an abundance of straight lines).   When I tell students that the smooth flowing front side of the glass should be used on their projects I inevitably hear that they prefer the straight lines.  Sadly, whether you like it or not, this is just bad craftsmanship.  It's akin to filming a movie out of focus because you like it that way.  Let me show you why straight lines should be avoided. Below are two flowers colored with the exact same glass only one was colored with the front of the glass while the second used the back side.  Which is which?  Well, the one on the left was done with the back of the glass which is harsh and flat while the one on the right used the front of the glass.  Without all the straight lines the flower petals on the right appear to actually curve.  It's a softer more delicate look and it's far easier on the eyes.  Remember to try to avoid using sections of glass with straight lines whenever possible. 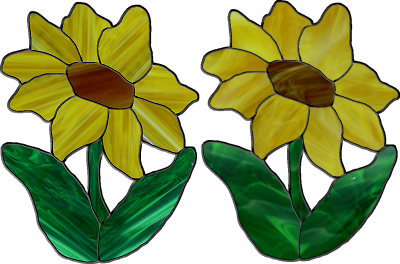 Well, it's official; Becky S's Elegant Fleur De Lis is completed and all her attention to detail comes through in spades.  The size of this window is actually quite shockingly large.  While it's just under 24 inches square, it measures about 33 inches both tall and wide once it's hung in it's proper diamond orientation.  It's a striking window for sure, with many thin pieces of glass and long runs. 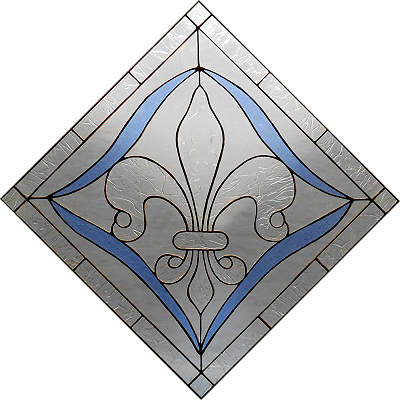 Betty has her latest sunflower window completed and, as always, this window turned out beautiful.  Yellow Spectrum glass makes the best sunflowers. 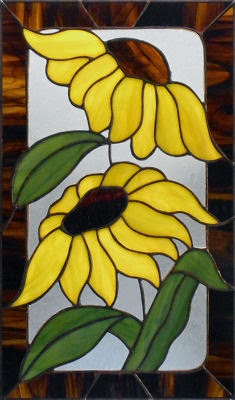 Carol's latest Butterfly Lawn ornament is ready to be staked into her garden.  That is unless someone she knows notices it and says that they like it at which point Carol will most likely give it away! 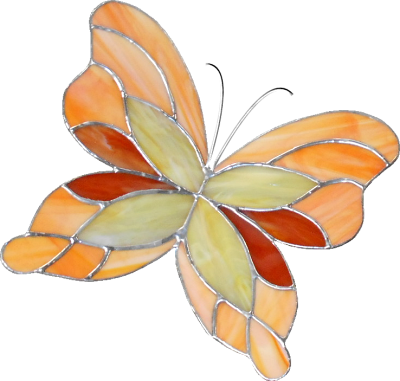 Jane completed two Bees Lawn Ornaments this week, one large and  one small.  The curved bodies and wings on these are really the bees knees.

In other Lawn Ornament news, we have a Sunflower and a Butterfly that Rowena started at home and then finished in class.  Looking at the two of these together gives me an idea for a smaller butterfly actually sitting on the sunflower.  I'll have to look into this. 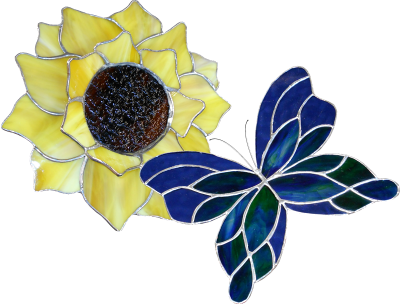 Betty has the faces, hair and halos cut for her Trio Of Angels and then started cutting out the glass for their dresses.  All I can say is that Betty is  moving at light speed on this one.  I think this is going to be an amazingly beautiful window and to see what she comes in with next week.| 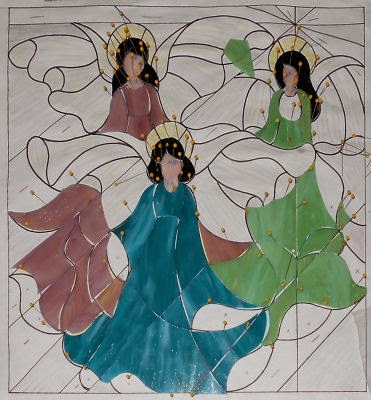 Linda L has the double glass stacked vase pieces for her Yellow Rose Window ground, stacked and wrapped which means that this window is ready for some background glass.   She's changing the size a bit so she can make an inner border out of bevels which she will then follow with a thicker, final border.  With the rest of this window being cut from clear glass it will be another example of how less can be more.

With the center of her crab window now ready to be tacked together Cindy cut the strips for her border so she could continue working on this while she's at home. The Blue waterglass that she's using for her water is the same blue that you'll see Carol using for her birdhouse border.  It's popular glass for a good reason. Note how Cindy put the deepest section of the blue at the bottom of the water.  We call that attention to detail. 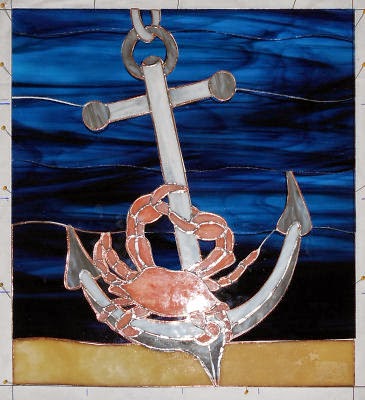 I dare you to tell me that Linda F's newest  window isn't going to be an attention getter.  Linda got her Wild Thing's hair cut but it's still a little unkempt if you ask me.  I guess that's what grinders are for!  When this is finished people are going to 'ooh and aah', mark my words.  Cartoon characters always turn out well when they are converted to stained glass. 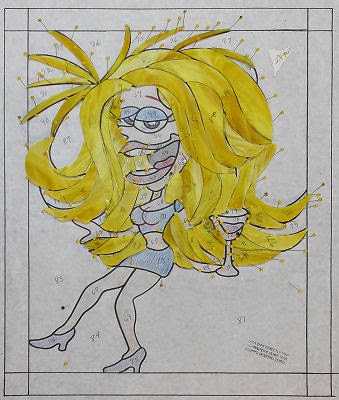 Susan started working on her Cross Window this week and it's all cut out and ready for grinding.  That's what I call fast work.  Once this is ground Susan will be able to start wrapping it.  And I'm suspecting that may happen during her next class.

Jeannette began working on this Flowing Geometric Design and has it very much underway with just three hours of work into it.  With her colors all picked out I think she'll be making great strides on her latest window.  And don't you just love the amberdescent glass that she's picked? 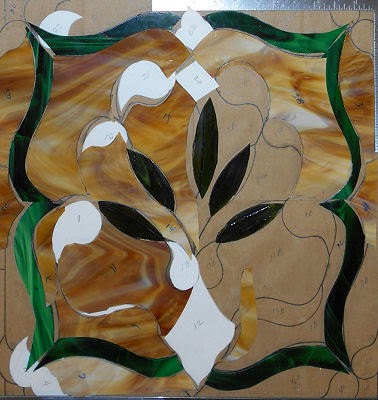 And Martha got all of her background glass cut for her Iris and Dragonfly Window this week.  She did it the best way possible-- by cutting out the complete octagon from her background glass, laying her finished pieces on top of it and then tracing out everything so everything fits perfectly while only needing a minor skim across the grinder.  It also makes the grain of the glass flow perfectly throughout the design. Nice work! 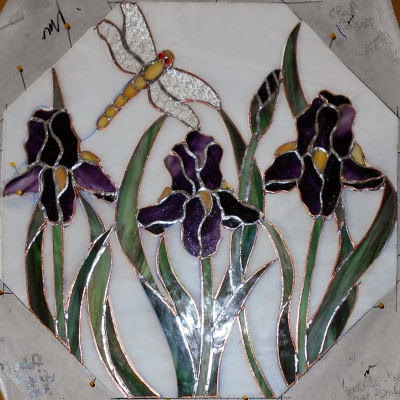 Terry started this Beveled Window in class and is headlong into it already.  Everything is cut out and ground with only her outer border left to attach.  Beveled windows are elegant and Terry has made this look simple as well.

Becky S not only finished her Fleur De Lis Window but also resumed work on her Sunflower by adding a border to it.  The light clear grey looks darker than it really is while it's sitting on top of the white pattern paper but when it's hanging it will just show a hint of color to separate it from the background without competing with the color of the sunflower itself. 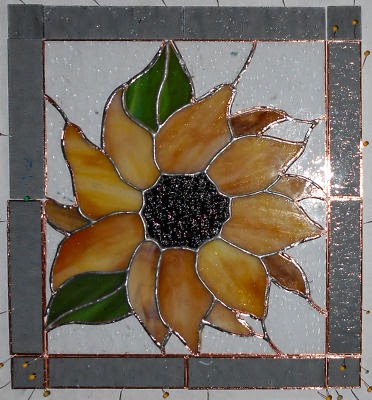 Then there's Carol who has her birdhouse window almost ready for solder.   All the glass has been cut and she's probably wrapping the remaining blue waterglass pieces of border pieces as I type this.  There are only five pieces left to grind before this window can get its brass channel put on it. and some hooks.

Our newest student, Sue, finished her butterfly last week and has her newest window all ready for borders already!  Well, the truth is that she had this started already but I wanted her to make a Butterfly last week so I could see where her strengths and weaknesses were.  She's going to add her borders to this next week and then she'll be soldering.

Myrt continued with the woodwork on her Outhouse, but in glass.  Once this is wrapped I think that she should tack it together which will make those sixty-six pieces turn into one which will prevent things from shifting out of place while she's cutting and grinding the background to this scene.

Natalie  is just about ready to begin soldering her cross window.  This week we saw her finish wrapping the background for her cross and then cut and wrap almost off of her double borders.  She's taken the unwrapped pieces home with her so I have no doubt as to what she'll be doing when she returns to class. 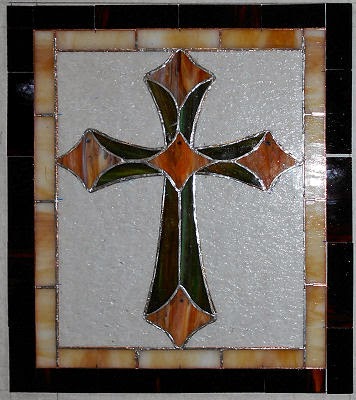 Mary Grace  has the front of her deer window completed and is ready to begin soldering the back side.  I took off all of the numbers she had on the glass with some steel wool which required me to wipe off the residue it left behind with a paper towel which actually cleaned up the window nicely.  Even though the flux is still there you can already see just how nice this panel is going to be. 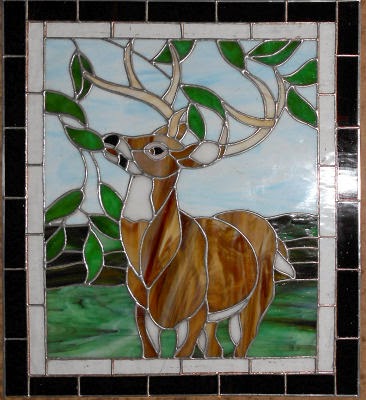 With her cat all ground and mostly wrapped, Shelley's Cat Window is almost ready for it's border.  There are only seven pieces left to go on this and three of them are already cut.  Look out becaise this window is just about ready for solder. 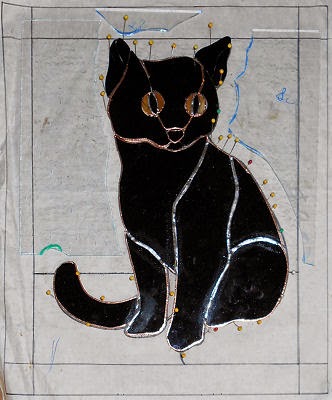 Bonnie  finished the repair work on her LSU window and I defy you to find what pieces she replaced.  I'll give you a hint-- there are 8(!) of them.  And she repaired this completely on her own after I showed her how to knock out the first piece.  That's impressive.

Jeanne fixed her FDL suncatcher which had one broken piece that we discovered at the last minute last week.  And as luck would have it she then dropped it as she was getting out of her car  while trying to maneuver around on her new crutches since she's hurt her leg.  I hope she mends soon so she can get back to normal.

And to wrap things up we have Paula who is about to begin making a stained glass mirror for her bathroom.  There's a Bayou scene tracing around the outside of this design leaving her with a large blank space in the center that Paula will cut out of mirror.  With her colors picked, and pattern all traced out she's ready for action. 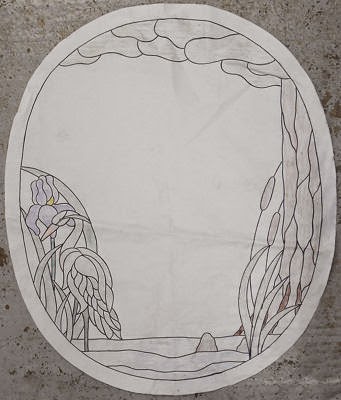 And that's it for this edition.  We hope you had as much fun reading about it as we did making it all!

Posted by Bayou Salé GlassWorks at 1:33 AM