Dean Has Them At The Convenience Store

Our tip this week is quick and simple.  Never wash the flux off of your project until you are completely (100%) finished soldering and touching up your window.  Once you take that flux off you're committed to the soldering job you see in front of you.  Refluxing won't make things any better, in fact, most times it makes things worse.  Just remember that when the flux is gone the patina goes on.  Learn it, live it.  :-)


So, as I had suspected, Jeannette completed her Crab Window this week.  She even went the extra mile and added a little wire work around the eyes to make this as authentic looking as it could be.  And it's exactly as I expected it to be-- gorgeous. 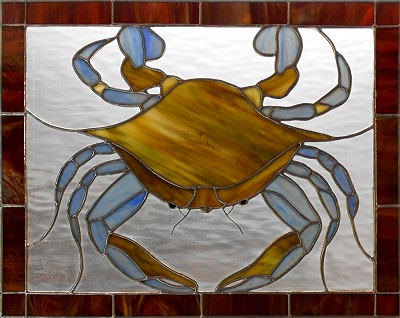 Gale completed her Louisiana Fleur De Lis Window and it looks so good.... (How good does it look?) It looks so good that the pattern has already been claimed by Carol where it may then go to one of the Wednesday students.   Gale did a great job with this window and I believe that a double border FDL would already be child's play for her to make. 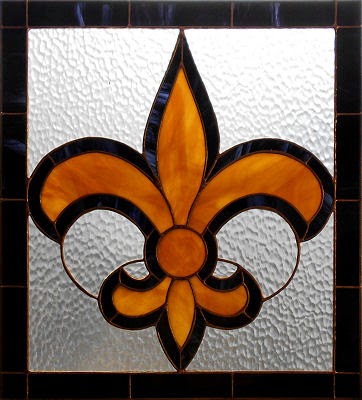 Linda F Completed her frog window and I'll bet this is going to look great in her yard.  It may be a small window but the attention to detail that Linda put into it pays off richly.  Everything lines up perfectly and this window is a great example of how far Linda has come since she first started. 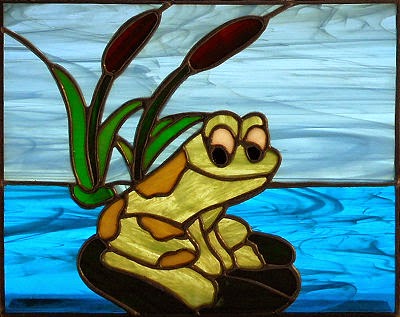 Betty also completed her clear stylized Fleur De Lis and for the first time ever a clear window has photographed beautifully.  Just look at all the textures she used to make this truly elegant window.  With colors replaced by textures, this window has a completely new look.  (And it's good!) 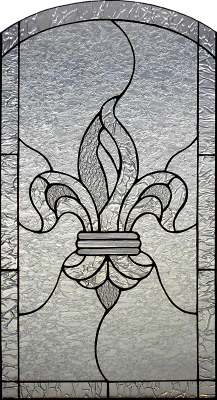 Shelley completed her Mermaid with a Pirate's Treasure Chest and she's the catch of the day.  Shelley says, "No more stained glass Mermaids!" but I think that will only last a little while because Mermaids certainly seem to be Shelley's muse.  Next up she'll be working on her flower window, after that maybe a Merman? 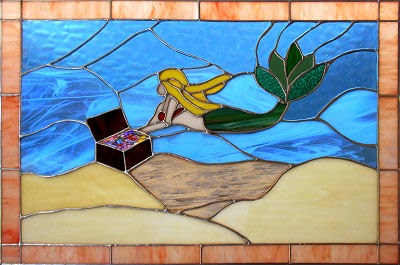 Jeannette  also finished her Anchor Suncatcher which is actually a mashup of three different anchors that I found on the internet that I liked different parts of.  There's nothing looking taking ideas from here and there and assembling them into one GREAT looking suncatcher.  But it wouldn't be great if the craftsmanship were weak and that's something that Jeannette has nothing to worry about.  Anchor's aweigh! 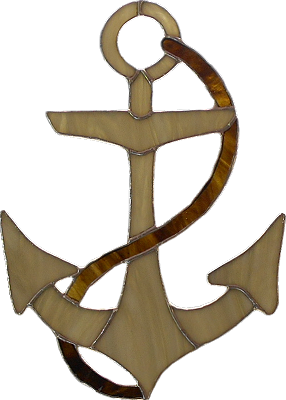 Betty completed her 3D Bumble Bee and was amazed at how just a few small curves can make such a big effect on this bee.  Seeing it all laid out on the pattern was one thing, but seeing the bee with all of its curves after it's assembled is another thing entirely.  I just wish they carried over the the pictures of these bees. 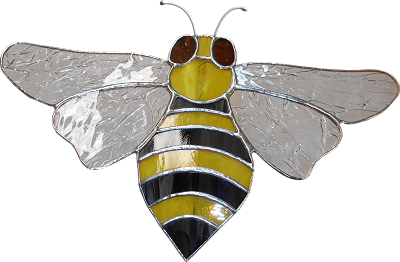 Janet now has all of the background glass for her Melon Window cut out.  And even better yet, most of it is ground.  I think there were only four pieces left to grind so there's a good chance we'll be cutting a nice yellow border for this when Janet comes back in. 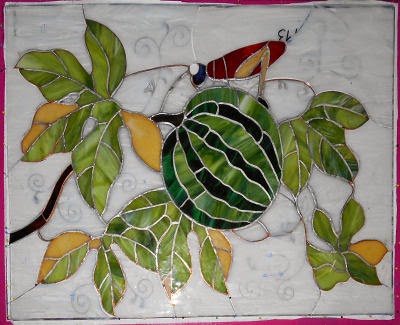 Ann has all of her flowers cut and ground and has begun wrapping them so she can tack them together and reduce the amount of pins holding things together (and also help minimize any piece slippage)  With the flowers all wrapped Ann will start grinding the stems and leaves when she comes back in.  She may have to tack these first but that shouldn't take more than 10 minutes. 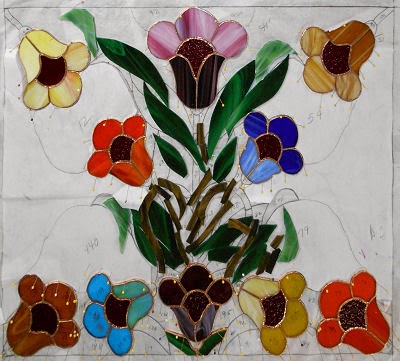 Betty started a new window this week and it's halfway cut out and looking great already.  She found this flowing geometric design online and although it's an easy window to cut out, the grinding and piece placement is crucial in making the design flow.  If just one piece is a hair more than a 1/6th of an inch the flow will break and the effect will be gone.  But I know Betty can easily handle this window (even with her eyes closed). 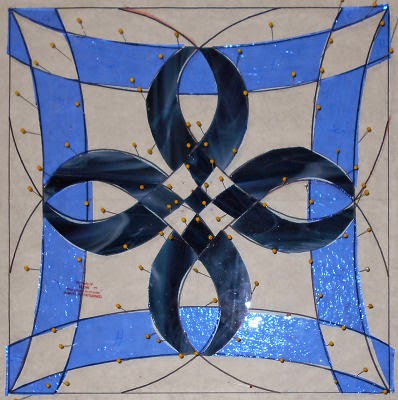 Carol came in with her new rose window all cut ground and wrapped.  In fact, the only thing left to do was to cut a border for it.  Once she picked a color it only took a simple 5 passes through the strip cutter and her border was ready to be ground, wrapped and then tacked into place.  I think that Carol turned this complex rose window into a not so complex two week project.  Nothing can stand in Carol's way now!

Becky S's steer is completely ground but there was one casualty.  One of the small upper corner pieces slipped and hit the grinding wheel scuffing it so much that it was readily apparent even in the small 1/4 inch piece.  So Becky will be replacing that when she tacks this together and adds her border.  Problem solved.

Gale not only completed her Fleur De Lis window but also began work on this Soldiers Window featuring and American flag background, a rifle, a helmet, and a Purple Heart.  I do believe that this is going to be another standout window in gale's stained glass crown. 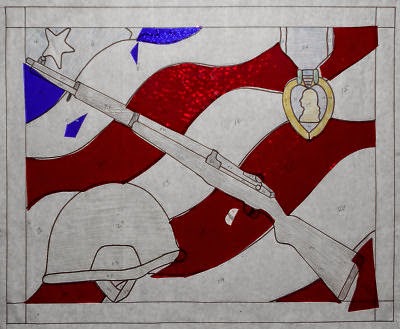 Jane loved this Octagon Iris Window and began cutting out purple water glass iris petals this week.  She ground them all to fit and then then took it home with her so she could resume working on it there.  I can't help but wonder how much will be completed when she returns to class next week. 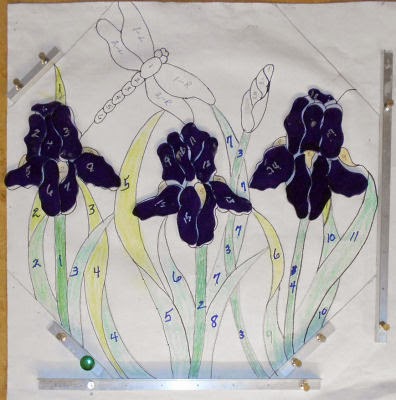 Natalie made some astounding progress on her Crab Window this week by not only cutting out the remaining crab pieces, but by also getting more than half of the crab ground as well.   I'm  amazed at how easy Natalie is making this project look.  Once the crab is completed she'll wrap the pieces and then tack it together to make fitting the background a lot easier.. 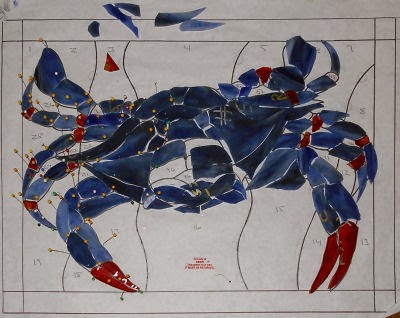 Rowena's baseball window is not really coming together... It IS together!  The only thing left to cut out is the bat and the background to the letters.  I think that Rowena is going to be very proud of this when it's completed and I doubt that will be long from now.  She can really focus on the task at hand. 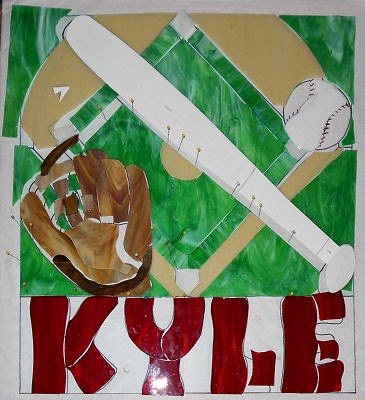 Linda F is making an interesting window which is, in all actuality, a CF Knives Logo.   But for all intents and purposes it's a Celtic Knot so that's what we're going to call it.   It's only nine inches in diameter so the pieces making this complex design are kind of small, but Linda has proven time and again that she's up to the task.  This sucker is almost completely cut out already. 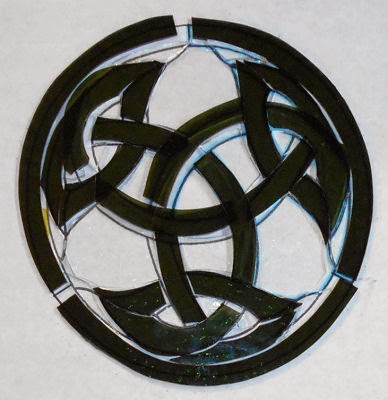 Sue's  first section of her Featherized Window is just about complete which puts her almost at the halfway point of this project.  I was impressed at how quickly she plowed through the background pieces and can't see how that will change when she starts cutting out the background to the second section of this project.  Before you know it Sue will be picking our a new design to work on.

And lastly we have Susan who worked on her second Sunflower Lawn Ornament.   As you can see, it's just about ready for wrapping,   The best part about a student making two of these 3D projects is when they assemble the second one on their own.  I'll be there to offer reassurance but I know that like so many other students who have made these, Susan will be very thrilled when she sees how easily this complex looking project goes together. 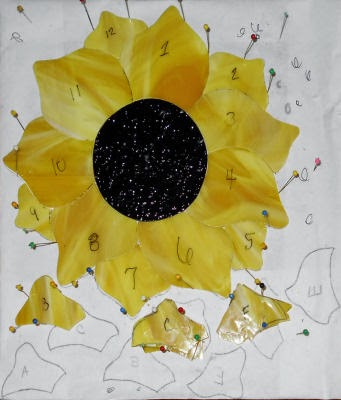 And that brings us completely up to date!