Easter closed down the shop for a few days while we headed out of state to visit family up in Pennsylvania.  It was a short trip but  it put the Blog behind a week so this post actually covers the events that occurred the week before Easter Sunday.  Since this is late, let's delve right into things.

First off we got to see Becky S complete her Bamboo and Panda Window and it's really striking.  The Panda is small enough to not steal the focus of the window which makes the bamboo the central theme and the window completely adult oriented.  Most times a bear in a window will make it scream "CHILD'S WINDOW" but in this case not at all.

Carol put the finishing touches on her Octagon Humming Bird Window while she was at home, right down to already having the lead patina'ed.  We just added two hooks when she brought it back in and then took its picture.  Carol's soldering is amazing and she's completing things at home regularly now. 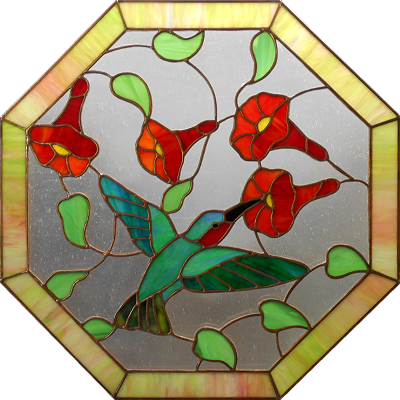 Cindy's back and she finished this Eye of the Tiger Suncatcher.  She needed one or two small touch ups on her soldering but they were very minor so at 8:50pm she washed it and took it home with her at 9:00. Along with her  great work it was also great to see Cindy back in class again.  We missed her. 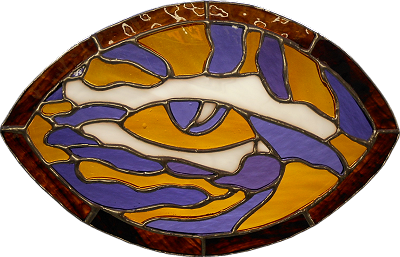 Jane completed her first 3D Rose Lawn Ornament but don't think this is something small for the end table-- it's as large as the sunflower you'll see below this.  Putting this together is a little perplexing at first but once it's done students find that it's impossible to screw up. 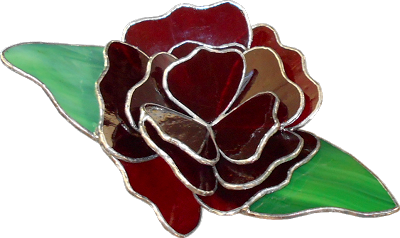 We've seen these Sunflowers before but this is Susan's first and it's a one of two project.   She'll be working on a second one next week and like the Rose Ornament, Susan has learned that there's no right or wrong here-- just a perfect Sunflower. 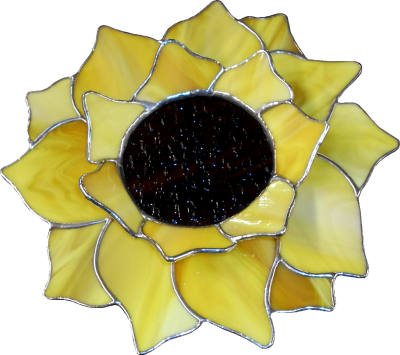 Our last completed project this week is another Lawn Ornament and it's a Bumble Bee that Rowena made.  During the assembly she got to see how to tack all of the body pieces and the wings into a slight curve.  Trust me when I say that when you see the completed project the curve makes a world of difference.  A little extra effort goes a long way in stained glass. 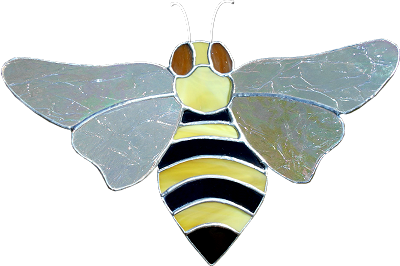 Becky B spent the day working on her Bird Of Paradise flowers and leaves and they are officially  cut out now.  There's no point in laying this on top of her background glass since the foreground is so busy.  That means that Becky will be cutting her background glass individually before she starts grinding this project. 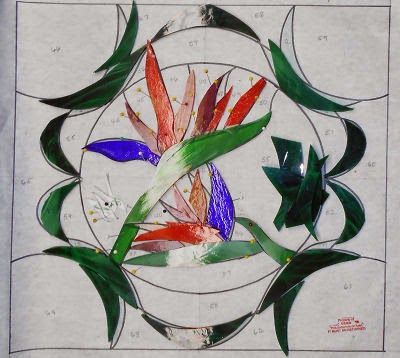 Terry's Egrets Window now has a border cut out and most of the center section is wrapped.  Soldering is just a step away for these birds.  And Terry's 'H' window features borders that are far more complex than other Letter Windows that she's made in the past.  I think she's feeling far less challenged by these and that she's doing what she can to make them more of a challenge!

Jeanne's Winnie the Pooh is almost all ground and tacked together.  The only thing left to do is cut the sky.  She's left the sky blank so she can cut it all out of one piece and get the grain to flow smoothly throughout the window.   She's also added extra leaves to fill the tree out more which I think looks great. 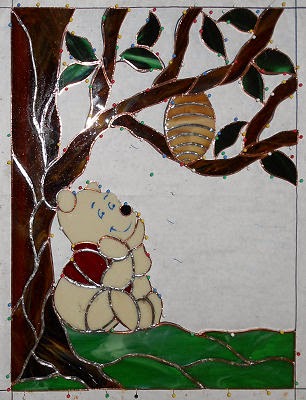 Betty continued working on her large clear Stylized Fleur De Lis Window by getting the top curved border and its matching corners cut.  Everything lines up beautifully and this window is ready to be soldered.  Betty also cut and ground a her first 3D Bee Lawn Ornament which moved along quickly for her and I suspect the assembly of it will go just as smoothly when she returns with it during her next class. 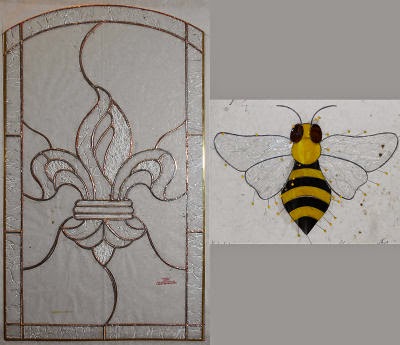 Gale worked up a storm while she was home and came in with her Louisiana FDL Window only needing a border.  After that was attached we added some brass channel and then she began the soldering process, leaving class with the front side almost completely soldered!  If this isn't finished when she comes back in I'll be shocked! 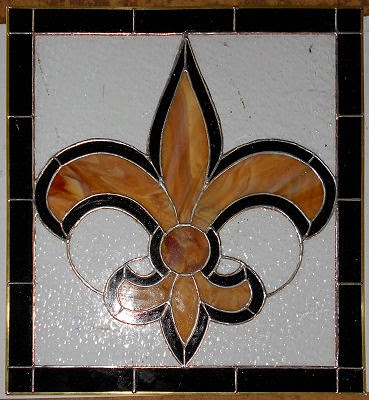 Brenda got all of her multi-million piece Magnolia Window ground and ready for foil.  Once this is tacked together we'll add the border and then get ready to do some soldering!  This is a beautiful design and I can't wait to see what it looks like when she comes back in. 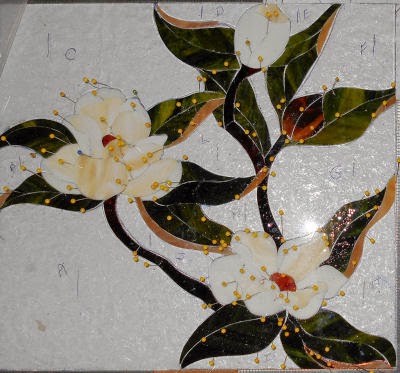 Once Becky S's Bamboo and Panda Window was completed she set upon cutting the glass for her Steer Head Window.  Before I even knew it all of her glass was cut and Becky was already grinding.   Sometimes you luck out and find the perfect glass for something that initially worries you when you see it as a black and white pattern.  And that was the case for the horns on this window--they're perfect.

Mary Grace has all of her Fruit Basket cut out and has even begun grinding some of it.  And to her credit, all I helped with were some of the grapes.  That's some pretty impressive work she's accomplished all on her own.  She'll resume grinding upon her return to class, but first she'll cruise. 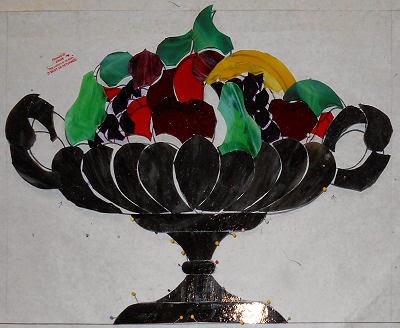 Linda F fell in love with this frog pattern and simply shortened it and then stretched it out slightly so it would fit into a metal frame which will display it prominently in her yard.  With all of the glass cut out already I know she'll have no problem grinding this while she's at home during the week between classes. 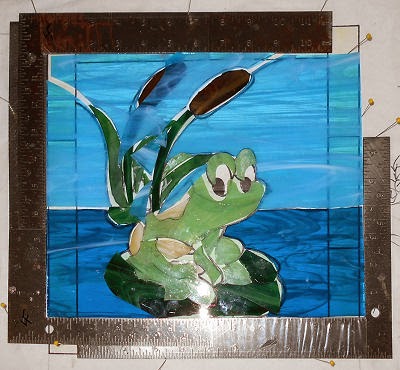 And Myrt's working away on her own multi-million piece project.  She's approaching it one section at a time (like I do to projects with a lot of pieces).   Her Outhouse Window's  wheel barrow is all cut out and ground now so I guess it's ready for hauling out the... well, never mind.

And Linda L's Wild Thing's eyes are cut and ground meaning that the woman itself is all cut and ground.  With that part completed Linda will take this home to possibly begin wrapping it.  But with a vacation coming up on board of a cruise ship I won't be surprised or or disappointed to find that she didn't get to it.  Either way Linda will be adding some text to the bottom of this when she comes back in. 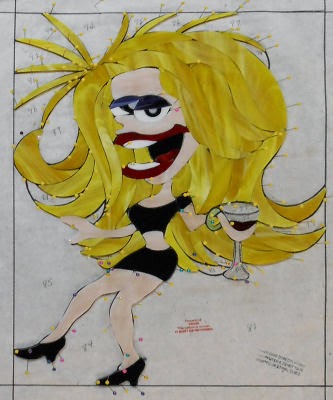 Martha has been making great progress on her own Magnolia Window.  In fact, she only has two sections of leaves to go and then she'll be ready to cut out her background glass.  Since there isn't much background to this window she'll cut and grind it before she starts tacking things together since she'd only be wasting glass doing it any other way.  I love the precision of her grinding. 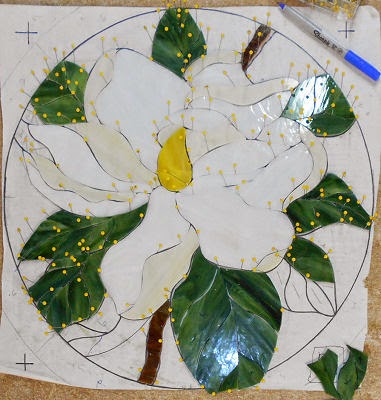 Rowena continued working on her Baseball Window and you can see that the colors are just perfect for this.  There's no doubt at all that this is a baseball field. She still needs to cut out the bat and the letters that spell out the name KYLE, and then this will be headed towards the home stretch. 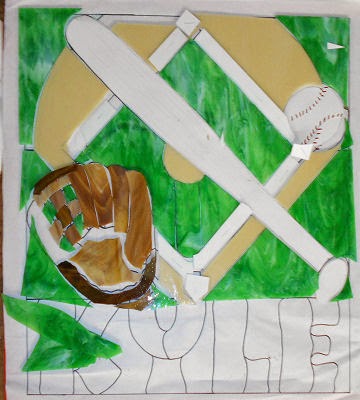 Sue's Featherized Window is all ready for background glass now.  Both sides are cut and ground but the window is extremely fragile at this point so Sue will be working on it solely in the shop rather than risking the transportation of such a delicate window.  Once the background is cut and tacked into place things will be far more solid.  And the reason that one of those 'feathers' is off color is because the other three are stacked two deep whereas the lighter one isn't. Trust me, it all matches.

Shelley's latest Mermaid Window has a border and just needs solder now We knocked out some glass in the stomach to give the mermaid a more natural look and when this is completed Shelley will be adding some glass jewels to the treasure chest.  This mermaid is going to be rich!

Jeannette's Crab Window is finished save for the soldering.  When lit up, the colors of this are spectacular.  Jeannette also worked on a large Anchor suncatcher which she got all cut out and ground before taking it home to wrap and maybe even solder.  If the Anchor comes back soldered I think Jeannette will leave with two completed projects next week. 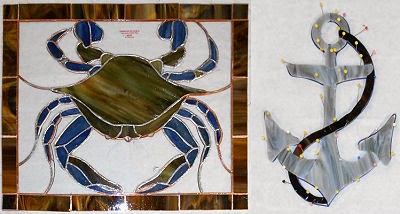 Carol got the Rose portion of her new Rose Window cut out but all I have to show you is her pattern.  Sometimes I'm a little slow when it comes to getting my camera out and that's exactly what happened during class last week.  But something tells me that there will be plenty more to see of this window when Carol comes back into class.

We have a second Blog Update almost ready to be posted so expect that within the next two days.  Once that's up we'll be back up to date after the Easter weekend took me out of state and away from my computer for a while.