With this post we are officially caught up and on time once again.  However, there's no tip this week because I lost my list of tip ideas and am currently in the process of reassemble (reinventing?) them.  Expect something next week because although I have an idea I just don't have the time to make the illustrations for it this week.


So Carol's Kaleidoscope Window is completed and as I expected, it all lines up perfectly.  The trick to making this window work is to maintain straight lines throughout their joints and to follow the curves in the pattern perfectly.  If you're off on one side the effect of a mirrored image is destroyed, simple as that.   Carol has this window made perfectly and does it ever look great with light behind it. 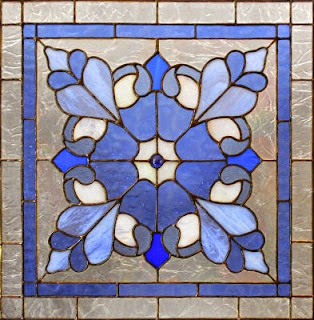 Sue's first Featherized Window is also complete and doesn't it light up wonderfully?  This is a perfect example of how matching textures can add so much to a design.  Sue did a great job on this and will finish up the second of the pair when she comes back in.  I love this and Sue should be proud of it.

Jeannette's Mickey Mouse is finished and as I expected it looks fantastic.  Like I always say, cartoon figures work out very well in glass.  I love the way Mickey looks as though he's walking out of the frame since is foremost foot is stepping out of the border. 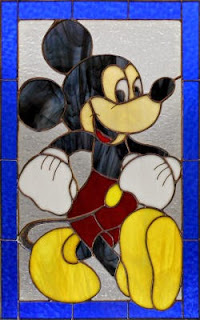 Brenda completed her stylized Cross Window in record time.  She opted to go with just two colors (and a clear background glass)  but was unsure of how it would look since she'd only ever seen it done with three or more colors in the past.  As you can see, it looks wonderful.  I hope this helps Brenda understand that changing up a pattern's color scheme isn't worth fretting over. 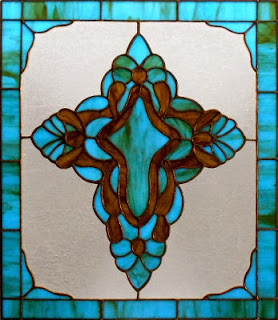 Betty made her first Bumble Bee Lawn Ornament and had no problem understanding how the pieces are tacked together to give the bee it's curve.  Janet also made her first Bee as did Jane!  Yes, we had three Bees this week but I'm only posting one picture since they all looked fairy similar.  I think everyone enjoyed making these and I really hope that Janet did because she has a second one ready to be assembled next week. 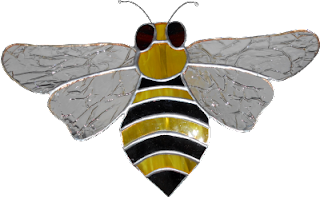 Becky B  got all of the pieces foiled for the round section of her Bird Of Paradise window and then decided to make a few design changes to fill out the petals on the top flower.  Once everything was squared away and looked the way she liked she re-foiled her altered pieces and then tacked the circle section together.  That means that she's ready for her corner sections. 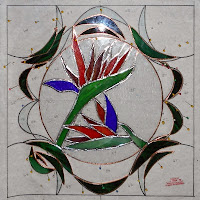 And Bonnie finished all of the cutting on her Elsa Window.  She's foiling this at home so she can begin soldering when she comes back in.  It looks like this princess is just about ready to
♪ ♫ Let It Go! ♫ ♪ 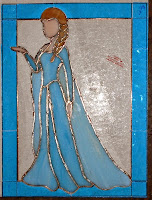 Ann has begun grinding and wrapping the bottom right corner of her window and has that section ready for solder.  Next week she'll resume another corner and keep doing so until this is all wrapped and ready for its border.

Charlie came in and worked out a pattern for some of the the inserts that he's making as his first project.  The design is simple enough but the corner clusters will stop it from being too easy.  Charlie will need to take his time shaping these small curves so they're all symmetrical and I have no doubt that he'll easily handle that.

Carol also worked on a hand mirror and now that the actual mirror has be cut and foiled she'll finish this one (and possibly a second one) when she comes back in.  You can even see that we didn't forget to trace out the mirror onto a piece of felt so it will be the perfect size to protect the mirror's back when it's finished.

Brenda  has started another of these Red and Black Fleur De Lis' at home and she's already soldering it.  Brenda is officially our Fleur De Lis Queen and I don't know what she'll do when she finds out that we're banning Fleur De Lis' in the very near future.  ;-)  Maybe she can turn her efforts over to Tiger Eyes... 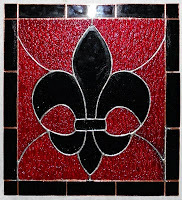 Becky S has all of her flowers, stems and leaves ground and mostly wrapped.  She's taken the whole thing home with her to resume foiling there and when she comes in (after her vacation) she hopes to have this all tacked so she can cut her background without using any pattern pieces.  I'm so jealous that she's on a cruise and I'm not! 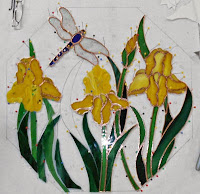 Cindy planned on working on her Tri De Lis Window but unfortunately forgot to bring in the glass for her border.  Luckily she did have the glass for her next project (an oval LSU Tiger eye) with her so she began working on that instead .  Again I was amazed at how much she accomplished in a single class because its already been cut and ground.

And Susan's  Shrimp De Lis Lawn Ornament is officially ground and ready for its foil.  I guess I'd best move on to drawing up her next pair of lawn ornaments (which will be bunnies!) 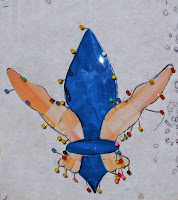 Jeanne's newest window is a Beveled  Fleur De Lis which she's finished cutting all the glass for (unless she decides to add another border).  As it stands it just needs the tiniest bit of grinding and then some foiling.  You've got to love working with bevels.  The add so much and really help pick up the pace. 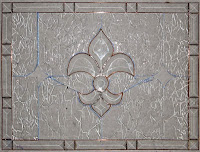 Terry has made some amazing progress on her Iris Window.  All of the leaves and the background cut, ground and tacked as well as both the double borders! Yep, she's already begun soldering it.  It's amazing how fast Terry moves on her projects. 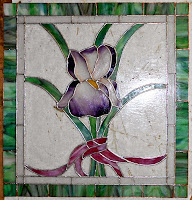 Martha got the round  border for her Magnolia Window cut and ground into place and then she resumed work on her Cardinal Window.   She had a white border cut and ground but when she started to wrap the pieces and saw them resting in place she decided that it sort of made the window look, well, blah.  So she put the white border off to the side and cut out an Orange/Yellow border that matches the flower centers and brightens it all up.  I think it's a BIG improvement and I know that Martha is happy with it now.

Gale, like Martha,  changed her mind about one of  the colors that she'd cut for a border so the first thing she did was pick out a new color and re-cut.  One she replaced the army green with a light blue she was back on schedule.  Before she left she had her window ready for soldering.  And if you ask me that's a nice relaxing way to spend a class evening. 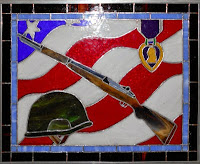 Myrt resumed work on her smaller than normal but bigger than small (Shall we call it 'medium sized'?) Stylized Fleur De Lis window.  She not only has her double border cut and attached but her channel as well  With the front side soldered she'll resume soldering the back when she comes back in.  She plans om finishing it so she can take it home, pack it, and ship it out in the mail sometime next week-- And I have no doubt that will happen. 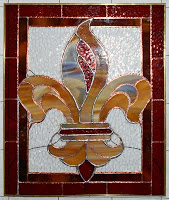 Shelley made excellent use of her time and got her the entire front side of her Flower and Bird Window soldered.  I was even able to pry her away from it so I could put a brass channel around it for her.  I have no doubt that she'll finish this in her next class and then be ready to start her next project.

This week we saw Linda L begin to solder her Wild Things Window in a very official manor.  She's done tacking this window and has moved on to the official soldering process.  With everything in place and the zinc channel attached this Wild Woman is hoping that she'll soon be ready to knock back another drink and party down!

And in the end we take a look at Sue's second Featherized Window which is actually a mirror image of the first one you saw way up there in the start of this post.  All it needs are a few minor touch ups and then a bath.  Look to see it completed when we come back.

And there you have it.  Everything that happened last week in our fun but busy classes.  I can't wait to see what our next set of classes brings us.