What's the most important rule of glass cutting?  Always cut 'Point To Point'.  If you want your curves to come out intact you MUST cut a straight line from the curves starting point to its ending point.  This is is NOT an option (especially on deep cuts). The odds for you making a successful cut go up from 50% to 90% if you simply make a straight cut across your curve first.  Before you attempt to cut out the shape below you NEED to cut along the red dotted line first.  Success is easy if you follow this rule at all times. 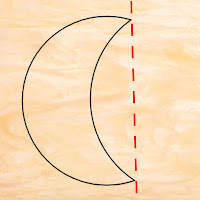 Terry's new Iris Window is her pièce de résistance -- at least for this week!  Everything from the design to the colors and even the soldering make this one window that she can certainly be proud of.  But it's the shading of the Iris that won me completely over on this window.  The grain of your glass can make or break a window and in this case it's made it in a big way. 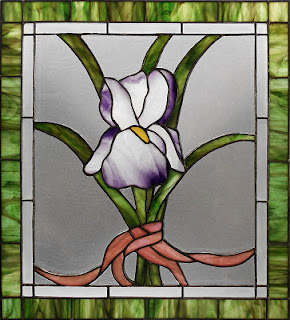 Mary Grace finished her Fruit Bowl Window and you can bet that it looks great before you even look at the picture.  That thin red border was the perfect way to bring red into the window without having it overpower every other color that Mary Grace used.  And for the record,  Mary Grace has gotten the hang of soldering down pat because the lead lines on this window are 'Slow Good'. 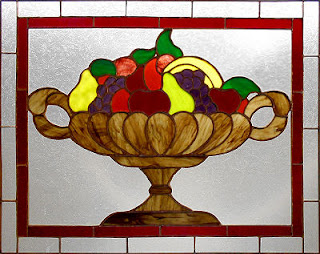 Bonnie's  Elsa window is *almost* officially  completed.  I say 'almost' because although all of the stained glass work is finished, Bonnie still needs to find the perfect snowflake for Elsa which Bonnie plans to attach on her opened hand.   If Bonnie can't find anything I have an idea or two which may work. 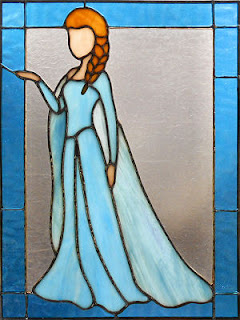 And Cindy has already completed the large Tiger Eye Suncatcher that she began working on last week.  Talk about a fast turn around.  The joy of a Tiger Eye Pattern is that you needn't worry about following the stripes perfectly. Just make sure the outside shape is symmetrical and smooth and you're fine. But that's not to say that just anyone could make something like this as quickly and efficiently-- That praise goes to Cindy. 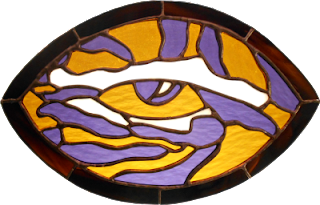 Carol has completed her first two Hand Mirrors.  Having never worked with mirror before she, like so many others, thought that there would be some secret to working with it but there isn't.  The only thing you have to be careful about is scratching the back (painted) side of the mirror and that's about it.  I even find that mirror cuts easier than most glass.  Do you want to know why Carol's pair of mirrors look so exceptional?  It's because she's always striving for perfection and never settles for second best. 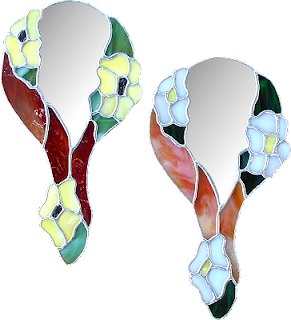 Myrt's got her Medium Sized Double Bordered Fleur De Lis Window completed and ready to be mailed out.  She'll be double boxing this beauty and then she'll resume working on the sky of her Outhouse Window when she returns next week.  Myrt knew that the only way she could reduce the size of this design and get a second border on it was to have the Fleur De Lis cut into one of the borders.  And that's exactly what she did.  For the record, I've always liked that effect anyway. 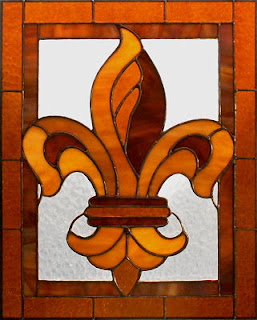 Susan finished up work on her Shrimp De Lis Lawn Ornament by wrapping, soldering, and then adding the all of the wires that form the shrimp's legs and antennas.  The wire work went quite easily for Susan which isn't generally the case for most students.  Many find it difficult to bend wire smoothly while straightening out any sharp bends but Susan achieved perfection without even batting an eye. 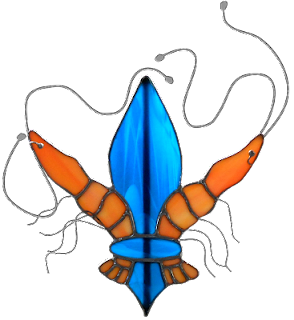 And Brenda completed her latest red and black Fleur De Lis.  I'm sort of losing track of these so I may be wrong but I think that this is the third time she's made this window in these colors.  Or I could be mixing these up with her red and white 'CC' Windows.  At any rate, she left this at the shop and everyone who sees it says the same thing, "It's so rich looking!"  And it is. 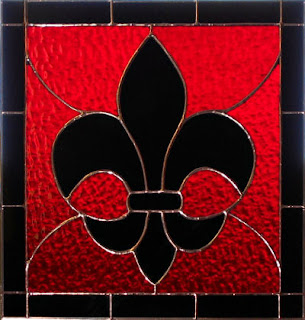 Sue finished her second (and last) Featherized Window which officially completes her Transom Window project.  She did a great job on both of these and I must say that they make a perfect pair.  I can't wait to see what's up next for Sue although a little Bee told me what I might expect when we see Sue again.

Martha began soldering on her round Magnolia Window after getting its green border all wrapped and  tacked into place. But before she started her Magnolia she was working on her Orange-Yellow border for her Cardinal window which will also be ready for solder shortly.  It's official-- Martha is a 'Two Projects At A Time' student now!

Brenda also began work on an elaborate flower window this week and trust me when I say that this picture doesn't even show half of its complexity.  There's a complex border system running around and through this window that will really add a lot to the look of this piece.  And if anyone can handle it, it's Brenda.

Charlie skimmed and wrapped all of his yellow 2x2 squares while he was at home and then worked on grinding his eight 3 piece corner accents for two of his windows (that's a total of 24 pieces altogether).  He used a square to make sure that his corners are a perfect 90 degrees and I won't be surprised to see him cutting out his white background glass when he comes back in.

Not content with just accomplishing a Tiger Eye, Cindy also brought in her purple and green iridized glass and got the border cut and attached for her Tri De Lis Window.  She went with alternating colors in her border along with gold corners which fits perfectly with this design.  This window is officially ready for solder now. 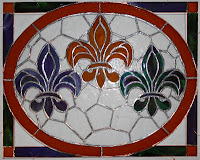 Wow, Ann is flying through her Flower Window.  Last week she had about a quarter of  the background glass ground and wrapped while this week she completed the remaining three quarters of her background.  There are a few tiny fill-ins left along the edges (the pieces can be seen resting on top of the bottom center red flower) but they're barely worth mentioning.  Ann's just about ready for her final border! 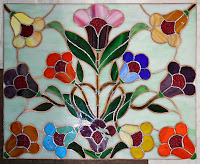 Gale  came in and immediately set to work on soldering her Tribute  Window.  She started that by learning how to attach a zinc channel and then moved on to making an actual bead on all of her lines.  By the end of the night the first side was completely soldered.  Next week she'll resume soldering on the back side of this project. 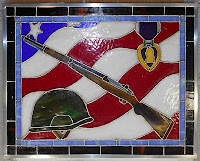 Jeanne made great strides this week as she got all of her background glass ground, wrapped and tacked into place.  Then she added a second border which she also ground wrapped and tacked.  And for good measure she even added the final brass channel to it which means that Jeanne's Beveled Fleur De Lis is ready to be soldered. 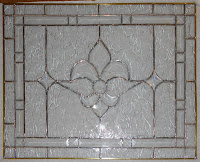 And last but not least there's Jane who is working on a rather large oval window filled with flowers.  Each week she manages to put away all of her pieces before I get a picture taken and this week was no exception.  Even though you only see one flower cut and ground I can vouch for the fact that most of the leaves and flowers have been cut out and most of it has been ground.  Jane still has a way to go on this but don't let the picture fool you-- she's much further along than you would believe. 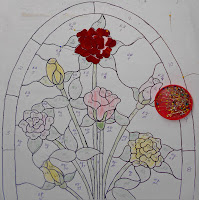 And that's about it.  Classes begin again Tuesday and I'm ready for another round!