We always seem to have confusion surrounding the terminology of the foil the surrounds the outside pieces of our glass.  When you have a foiled piece on the table in front of you the top edge (or the top perimeter) is the foil on top of the piece.  The side edge is on the narrow 1/8th section of the glass.  The bottom edge is under the piece resting on the table and therefore isn't able to be seen.  The diagram below should make things more clear for you. 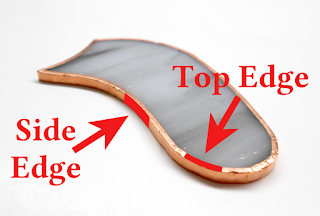 Well, Susan's Zen garden is officially complete now that she's attached that astounding tree to it.  It's an incredible effect and Susan did it all on her own.  From start to finish Susan took this project and ran with it needing no help at all from me save for advice here and there. Color me impressed! 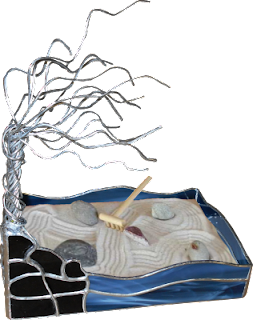 Beckie B completed her Bird of Paradise window and what a window it is.  Rumor has it that this will be a gift but I can't imagine who it would be for... 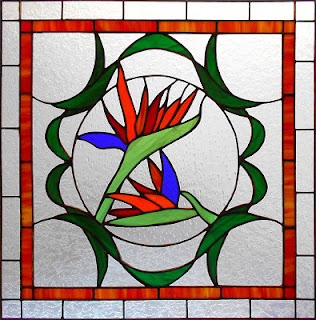 Bonnie's  finished her beveled Fleur De Lis Window and used just the barest hint of color in it.  The inner border has a very light pink champagne tint to  it which adds some color without detracting from the bevels at all.  But then again, a strong dose of color in a thin  inner border really looks great as well.  No matter, this window is perfect. 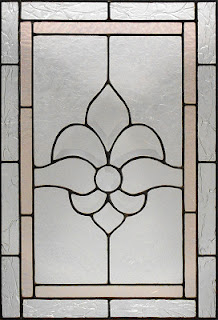 I don't think anyone in class (here in Louisiana) has ever made a nightlight before.  They were quite popular when I was up in Pennsylvania and now Betty may make them popular again.  Here's a look at one of Betty's twenty-four Angel Nightlights all lit up.  These are perfect gifts.  And note the beautiful twisted wire that forms the halo. 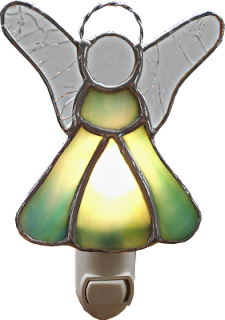 Brenda put the finishing touches on her Tiger De Lis and it's scary.  Scary good, that is!  All of her fears were unfounded because this looks great.  She's eying up a HUGE Fleur De Lis pattern but she also said that she may have to make another one of these Tiger De Lis.  I'll have to show her the easier on with just a single eye in it.  When you just give these things away you have to be practical about the amount of time it takes to make one. 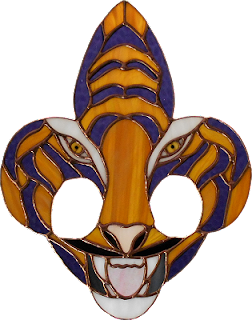 Sue has completed her ladybug  and decided to make the  solder two toned by coloring the solder around  the lady bug  black but leaving the rest silver.  You can even see the effect in the picture of you click on it to make it larger. 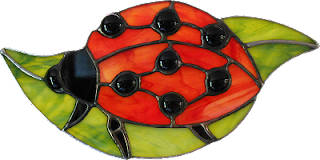 Jeannette's Butterfly Lawn Ornament is completed and I think that Jeannette was amazed at how easy it was to finish this.  There's really nothing to these if you just treat each wing as one suncatcher.  Once the two wings are completed it's really a simple process to join them and then add the antennas. 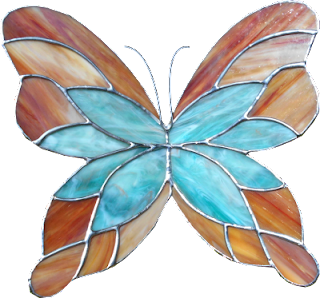 Cindy completed two Fleur De Lis and a flying pig suncatcher while she was in class.  One of the FDL's was nothing but a pattern when she came in so you know Cindy is easily able to fly (like a pig?) through suncatchers at this point in her stained glass career. 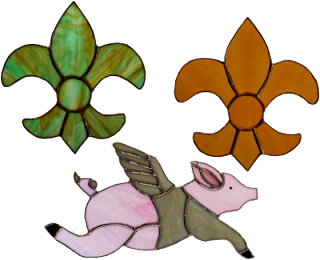 Our other Becky(Beckie S) is also working on a Bird of Paradise window which she now has somewhat tacked together.   She'll do the background for this section of her window when she returns and will then start working on the initial side of this window. Once both sides are complete she'll just join them together.

Myrt has made tremendous progress on her 3 butterflies and Tulip window while she was at home.  The red flower will stand out nicely against the yellow butterfly that it's resting beside.   Myrt has really made some serious progress on this window already. 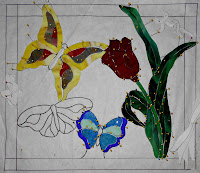 Carol's latest lamp is certainly another winner.  In fact, we both like this one better than her Magnolia Lamp.  I have to say that I was amazed when she walked in the door with all eight of her panels tacked together ready for solder since she had just begun cutting these out in class just last week.  By the end of this weeks class it was together and just needed a little more soldering to go before it's completed.  The next time you see this it will certainly be lit up.. 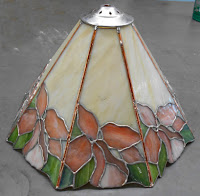 Gale has only one border to go on her window but before she gets that gets attached she needs to get her four corners together as much as possible.  In this border scheme sizes are dependent on pieces that haven't been attached yet.  And even though two of the borders appear to be the same size, they aren't.  We'll explain that one when we see Gale's final border attached next week. 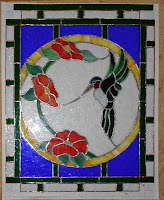 Here comes another window that I'm going to love.  Jeannette is turning the Minion named Kevin into a piece of stained glass art.  She needs to paint the mouth on but that's easy enough.  Doesn't he look great?  (I've photoshopped a mouth into place so you get the full effect.)

Ann started working on a new Fleur De Lis Window and got all of the central FDL and it's surrounding amber tracing all cut out.  She's begun grinding her pieces and things are already looking great. 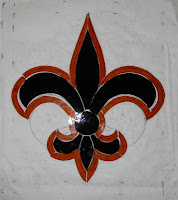 Linda F has got hearts on her mind.  With her Flart ready to be foiled she began working on two other hearts  including two hearts within a heart. The straight lines in the multicolored heart mean that we'll need to add some wire bracing around that particular suncatcher because straight lines just love to fold in half in stained glass.  But there are ways to fix that which we'll surely do with this design. 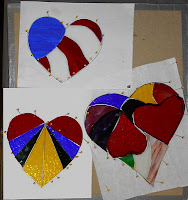 Vickie's Fruit Bowl has completely taken shape with just one week of  cutting.  In fact, most of this is cut already.  She's hasn't cut the grapes and might use glass globs for them to help eliminate some of the more tedious grinding.  There's a border system around this which turns this circle into a rectangle and fills out some of the space to make it more 'standard window' friendly.  Come back and see how Vickie does that in the weeks to come. 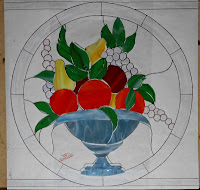 Terry came in with the corners to her horse window attached but she was slightly out of square.  All it took was a simple adjustment and then Terry got her border cut and attached.  She's soldering it now so I believe that we may only see this one final time before she moves on to her next project, a Cross De Lis. 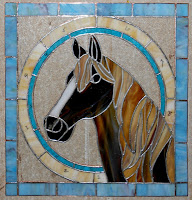 Linda L got the border attached to one of her three transom window inserts.  She's taken it home to solder and will work on the second one when she comes back next week.  These are really going to change the look of her house in a big way.

Susan spent a lot of the day at the grinder and has her two Scarecrows almost ready to be foiled.  As you can see in the picture they have two different bottom 'aprons'-- the one on the left has only three pieces while the one on the right has 14.  That sounds like it would take a lot of extra work to accomplish but as Susan found out it was very easy to do and best yet, she has to only skim the pieces to get get everything to fit perfectly.  If only every step were that easy.

Shelley has all of her Aquatic Window cut out and has begun grinding  it now.  As I've said before, I like this way this looks while it's on the table so I can't help but think that I'll love it when it has some light behind it.

Here's a look at the rest of the completed Angels that Betty accomplished this week.  What you see below are a Choir of Eighteen Heavenly Angels that just need to be attached to their nightlight bases before they can be gifted.  That  means that Betty only has about five or six more to go before she gets to move on to something different.

Mary Grace  got all of her large bee ground and wrapped and could have even gotten it tacked together, but since she wouldn't be able to solder it we decided that it would be best to wait until next week.  If you're dealing with a small project (like this one) it's best not to tack it together unless you can start soldering it.  The longer that flux sits idle on a project, the harder it is to form a bead later on.

And that's about it for this week.  We have a busy two weekends coming up.  Not only do we have our regular 5 sets of classes but this weekend we'll have a Weekend Workshop and on the following weekend we'll have a Fusing Workshop.  All of this means that there will be plenty to read about in the upcoming weeks so be sure to come back.