She Read A Book

Foiling.  Most students don't enjoy foiling their pieces but it's one of my favorite parts of the process.  Beginners to stained glass always assume incorrectly that the lead will cover their foiling mistakes but nothing could be further from the truth.  In fact, once lead is applied any foiling mistakes are exaggerated.   Lead will only adhere to foil, it cannot stick to glass.  If your foiling is haphazard, irregular and spotty then your lead will be that way also.  If you take your time foiling your pieces your soldering experience will go much smoother.   Well look into to this in more depth in the next few weeks.


Well, in just three short weeks Carol was able to outdo herself by making this incredible panel lamp.  Her attention to detail was amazing from start to finish and her soldering was magnificent.  I don't want to embarrass her but when someone does something this wonderful well I have to make sure that she gets her fair share of credit.  Let me tell you about the soldering on this:  I touched up two lines, that's it.  And they were fine as they were but Carol just wasn't happy with them. I'm just amazed at her work.  Carol is now our official Lamp Queen and I'm not saying that for brownie points, Richard! 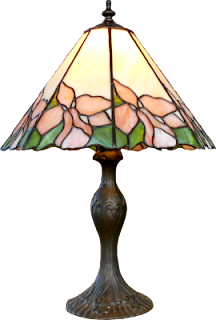 This is Terry's Horse, her horse is amazing.  In fact, I've already had one student from another class ask about the availability of this pattern.  You can't lose with this design because it always looks great but when you put Terry into the mix well, you know you're going to have something extraordinary when it's completed. 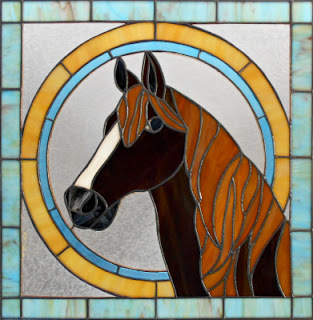 Hip Hip Hooray!  Betty has completed her twenty-four(!) Angel Nightlights.  It may have been a bit overwhelming (twenty-four of ANYTHING is a bit much) but she got them all completed in record time and the craftsmanship just kept getting better and better with each one she turned out.  In fact, Betty is now my resident expert when it comes to putting a bead around the edges of suncatchers. 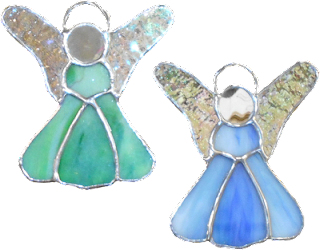 Cindy actually completed 5 of these Fleur De Lis Suncatchers but the camera's memory card filled up before I got a chance to snap the last one.  But this certainly shows you what Cindy accomplished this week.  And although these are suncatchers they are no small feat.  They're all nice and symmetrical which says a lot. 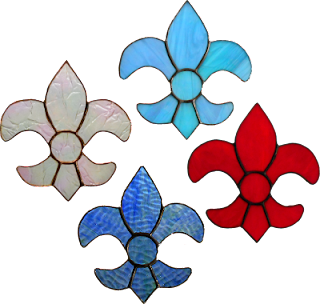 Then there's Ann who has all of the grinding completed on her latest Fleur De Lis Window.  She may not have noticed how closely I was watching her grind but I have to give her extra credit for placing previously ground pieces on top of other pieces and tracing around them to make perfect fits.  Why students insist on guessing how much glass to grind away rather than marking exactly what should be ground away will always confuse me.  Great job, Ann.  As you can see all of her pieces make a perfect fit all throughout the Fleur De Lis and her thin border never wavers in size. This is ready for foil. 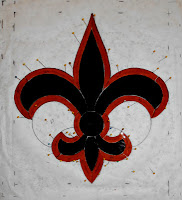 Bonnie began cutting glass for her two Iris Inserts.  This is the bottom panel that will flow upward into the second pane of her frame and connect to it through the flowing leaves that trail up and out the top of this panel.  careful eyes may spot a stem leading upward as well which means that Bonnie will have a second Iris in the top panel as well.  I love the glass she used and have no doubt that this will be gorgeous when it is lit up.

Brenda is all set to begin a few more clear beveled windows and has started wrapping the bevels that she'll be using.  Here's one of them (though I'm not sure how many she plans to make I'm sure I saw at least a pair of these bevels sitting beside her). 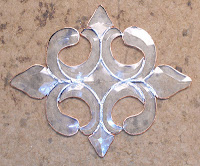 Carol not only completed her Panel Lamp but got all but the yellow border for this LSU Window that she'd been working on at home.  She came in, added the border, started soldering and was working on the back side when she finally called it a day.  I have no doubt that this will be a completed window when Carol returns.

Charlie is just about ready to add the final border to the first of his pair of Beveled Window Inserts.  Before that final border is cut he's going to learn how to cut a stock, rectangle bevel.  It's very simple until you get to the wrapping part but then there's a trick to make it easy.

Becky S got the left half of her Bird Of Paradise Initial Window all tacked together (save for the background) and resumed work by starting on the right hand side of her window.  Her C has been cut from wispy black while the oval border has been cut from a solid black.  The border itself is a good 20 inches tall and it's only cut from two pieces of glass which means that the points where the two pieces meet mustn't be off by even a 1/16th of an inch, and as you can see Becky accomplished that easily.

Jeannette's Kevin The Minion Window looks great and is only a border away from being ready for solder.  She's done a great job on this and I'm sure the recipient of this window is going to love it because I already do.

Gale has her border all attached and her channel in place so she's taken her Humming Bird Window home to solder during the week.  The border took most of the night to complete but now that it's attached you can see the fruits of Gale's labor.  No extra work goes unnoticed when you are doing stained glass. 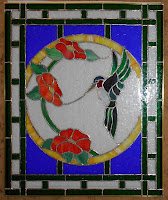 As of this week Linda F has all three of her hearts ground and will begin wrapping and soldering them when she returns.  These should go fairly quickly for her because, let's face it, Linda's got a unique set of skills when it comes to stained glass.  :-) 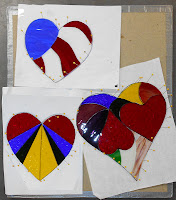 Linda L has her first of three Beveled Transom just about ready.  The final border and brass channel was added during class this week and then she started soldering.  She's taken it home with her along with the other two so she could possibly solder the front sides during the week.  What a difference these are going to make to her house when they are installed.

Susan has her two Halloween Scarecrow Lawn Ornaments almost completed.  When she returns to class she'll start foiling these and then adding the final solder to finish this fun looking pair.  We'll hang these two smiley faces on stakes and see if they keep the birds away.

Mary Grace cut out the orange pieces of this Pumpkin Lawn Ornament while she was at home, came in and got the leaves and stem cut and then wrapped everything.  She's got her pumpkin tacked and ready for solder now.  Then when it's all soldered she'll tack on the leaf overlays and call it a day! 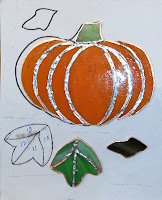 Myrt's Just got a few pieces of wing left to grind before she can start wrapping this.  In fact, she can start wrapping her pieces now if she wants because the easiest way to cut this background will be to trace around all of the butterflies and the flower on a piece of glass cut to the size of her window.  This will give her a perfect fit and a much quicker experience in cutting the background since things will fit almost perfectly from the start. 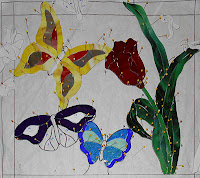 Natalie started soldering the front side of her Crab Window  after she got her border attached and her brass channel on.  It's been a while since Natalie has soldered but I feel great in saying that she hasn't forgotten a thing.  She's soldering at a slow but steady pace and the need for touch ups is almost completely non-existent because of this.  Slow and steady always wins the race. 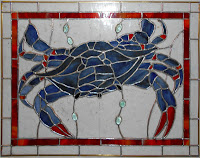 Martha began grinding her angels now that they're both completely cut out.  She even has a great deal done on the first one but I turned my head for just a moment and Martha was outa here!  Before I even got a picture.  So enjoy this picture from last week again. 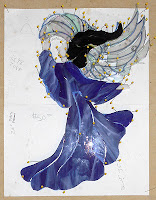 This is the back side of Paula's Mirror and since it has solder on it you know that the front is complete now.  That means that Paula will be moving along to another project when she returns because this just needs a few final touch ups and then a good cleaning.  I know that Paula will be exciting to get this mounted on the wall in her bathroom.  How will she do that?  Mirror clips! 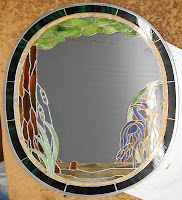 With the bottom ocean floor all ground on Shelley's Aquatic Window you can see how this will be falling into place.  Yes, the top is in a bit of disarray, but that's the way it goes when you grind-- things get messier before they get better.  But you can surely see the progress that Shelley is making here as she works from the bottom up.

Sue is working on a larger version of the Scarecrow Head and she's changed the fringe around the neck so that it looks like suspenders  going over an orange shirt.  I love the ingenuity here.  It's always great to see students take a pattern and run with it. 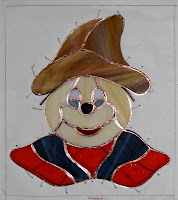 Rowena has five of her six panels completed and the sixth one is already soldered on the front side.  That means that we'll be seeing these completed next week without a doubt.  All she needs to do is spend a few minutes soldering and then wash and color each window.  Next week I'll even have them arranged in the proper order so you can get the full effect of the finished window that these will drop into.

And lastly I have a 'sort of' picture of the Cross De Lis that Terry is working on.  Actually this was the first version of the design that was done but the cross looked like it was hanging a bit low so we re-drew it with the cross centered and the entire pattern looked so much better.  And that's the version that Terry is actually making.  But I forgot to snap a picture of that one so you'll have to get an idea of what she's working on from this picture. 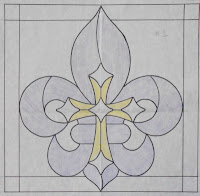 And that's it.  We had four students join us this past weekend for another of our quarterly Weekend Workshops and we had two new patterns drawn up for this one.  That will be covered in our next post which will happen quicker than you might think.  Where is this year going anyway?

Posted by Bayou Salé GlassWorks at 8:35 AM