We've had another Weekend Workshop and as you can see from the pictures below, everything went wonderfully.  Our students included two familiar faces; Roxane and Angie, as well as two new faces, Natalia and Jacob.  Natalia is the wife of one of our weekly students (Charlie) and Jacob is Angie's son so it was a very familiar and friendly atmosphere.  But that's always been the case in any of our past workshops as well.  From left to right we have Jacob's Heron, Natalia's Daffodil, Angie's Crab, and Roxane's Heron.  Let's get into this and see exactly what they did while they shared their weekend with us. 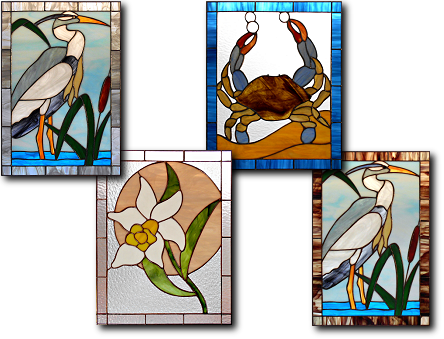 We'll start with Jacob who began by cutting out his paper heron pattern and then traced those onto glass with a permanent marker (which isn't so permanent on glass).  Once his pieces were all traced out he set to work on separating them with a glass cutter.  As you can see, he decided to get his feet wet by cutting out his heron's beak and leg pieces first. 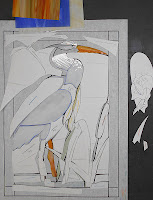 Jacob had no problem when it came to cutting glass.  Here is his window all cut out BEFORE being ground.  When things start out fitting this well you know that your grinding experience will go smoothly (no pun intended) and quickly.  In fact, I think Jacob may have finished all of his grinding first. 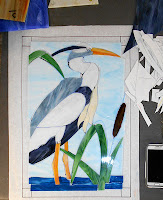 After he ground everything to ensure  a perfect fit Jacob spend the remainder of his first class  day wrapping his pieces with copper foil.  Its a tedious process but once you get the hang of it things get easier.  You can see things fit together beautifully and you can also see that Jacob is deciding between two pieces of glass for his border.  They are sitting on the right and on the top of his newly foiled pieces.

And here is Jacob's finished Heron.  As you can see he went with the glass on the right (gray) for his border and then he chose to leave his lead silver since it went so nicely with all of the grays in his window.  Jacob took to the copper foil method effortlessly (he's worked with Lead Came in the past) and really enjoyed himself.  In fact, he's already planning on things to do later on down the line which I'm sure he'll have no trouble with. 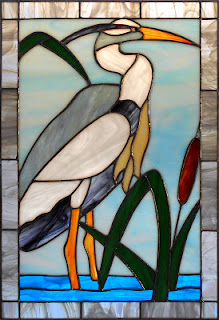 Up next we have Natalia who had her husband Charlie beside her every step of the way (for reassurance).  Using the cutter was a bit trying at first for her but after a few cuts she realized that you don't need to put an extreme amount of pressure on the cutter to make a nice score line.   Once she 'reeled in' all of that extra energy she was able to relax and enjoy the cutting process a little better. You can that she's about to begin working on some of her yellow flower pieces because she has her pattern pieces on top of the glass ready to be traced out and then cut. 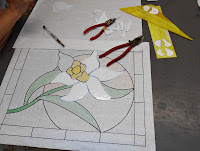 Once her window was ground and everything fit into place perfectly she began foiling her glass pieces.  Natalia didn't have any problems with any part of making her window but if I recall correctly this was one area where she truly excelled.  I think Charlie may have a glass foiler for all of his projects from here on out! In the picture below you can see one of the border choices that Natalia decided not to use sitting atop her window. 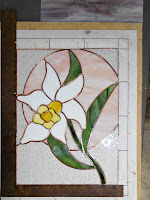 When it came time to solder her window Natalia was full of doubt.  She was positive she wouldn't be able to do it correctly but when I handed her the soldering iron her first line wasn't bad at all.  I told her to take a deep breath, to relax, and to just move slower while doing the second line and then it happened-- She made a perfect lead line on her second pass!  Once she experienced how easy it was her confidence was over the top and she had no problem finishing off her first stained glass window. 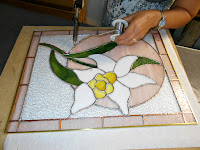 And here's Natalia's finished piece. She changed the border from the color we usually recommend and it worked out so well that we've decided to use this glass for this window from here on out. I think this weekend really helped Natalia gain confidence with her artistic abilities because she was absolutely radiant with joy when she saw her completed window hanging in the light. And she SHOULD be proud of her work. 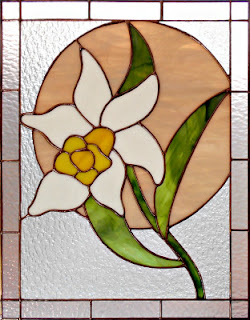 Now, our next two students should be familiar to anyone who regularly reads our Weekend Workshop Blog Posts.  Roxane and Angie have been here three times before so we upped the ante for them a bit by allowing them to pick out a subject for whatever they wanted to make and then I drew something that was a little more complex than the standard patterns.  Jacob also did one of these advanced patterns and I was impressed (extremely) that he had no trouble at all with it.

Angie had decided to make a Crab Window and although you can't see the pattern below you can see the glass that she's using for the ocean floor bottom.  She has her paper pattern on the glass and is utilizing the straight edge of the glass by aligning it to the straight edges of the pieces.  By positioning her pattern on the glass this way she avoids having to make the hardest cuts of all, a perfectly straight line.  Nonetheless, these were easy cuts to make and Angie picked them as her first cuts so she could get back into the grove of things since she skipped the glass cutting lesson that Jacob and Natalia had at the start of the first day. 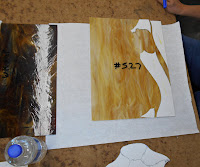 Here's is a look at her window at the end of the first day of class.  Angie ground, wrapped and tacked her crab and ocean floor together and then traced it onto the glass she picked for her background.  Doing it this way made a perfect fit with just a minimal amount of grinding.  Here's you can see that the background has been cut and ground but not yet wrapped. 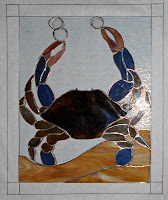 With everything cut into place, ground, wrapped, and tacked we began Sunday by cutting her border and applying a brass channel to the outside edge of her window.  Below we see Angie intently soldering the front side of her Crab.  When it comes to soldering, slow and steady wins the race. 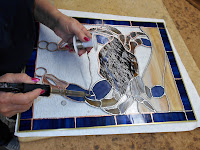 Angie's blue border choice is the perfect fit for this window.  Note the little bead eyes that she's attached to the lead for a truly authentic look.  I was initially worried about the number of leg segments that Angie would have to cut to make this pattern look good.  The more pieces we add, the more time it takes to make and we only have two days in our workshop.  In the end we were able to come up with a pattern that featured nice detailed legs and claws without having to resort to extraneous lead lines that add extra pieces and take away from the flow of things.  It's really a beautiful window.  Angie is always blast to work with but next time I hope to be able to spend more time with her during our two days together. 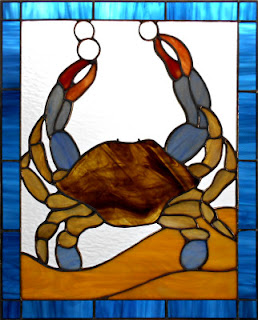 And last but not least we have Roxane.  She wanted to do a Heron and her pattern came out a little taller than normal to make the pieces easier to work with.  But it's also a little smaller in width than our standard 16x20 windows so I guess it all works out in the end.  Here's Roxane laying out her paper pattern onto the white glass for her first cuts.

Roxane remembered how to do it all and before I knew it her window was ready to be tacked together.  She ended up picking a darker border than the one  that Jacob chose for his heron which looks more like a frame rather than an extension of the window like Jabob's does.  I'm equally pleased with either choice but I will admit that I was happy that Roxane went with a different border because it made sorting through all of the pictures I took that much easier for me!  There was one other difference between the two heron windows that helped me sort out which one belonged to Roxane and which belonged to Jacob.  Can you spot it? 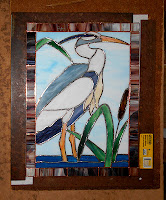 It's amazing how different glass can look from one side to the other.  Here's Roxane soldering the back side of her window and notice how light the border looks on the other side.  When it lights up it will certainly be dark again which is the magic that having light behind a window will do to stained glass.  It's also something you should always pay attention to because glass can light up very differently from what it looks like when it's sitting on the table.

And here's Roxane's completed Heron. The dark border really sets this off nicely and made Roxane's choice of copper colored lead the best choice.  Have you eyed the other small detail that was different between the two heron windows?  The eye on Roxane's heron is all black unlike Jacob's which is white with a black dot in it.  It's a subtle difference but it does change the look more than a bit.  This is lovely work from the most danceyist woman that I've ever had the pleasure to meet-- and we will dance again! 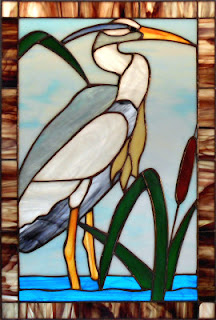 It was a very fun weekend spent with four wonderful people who all had a great time together.  The fact that Angie and Roxane are well known to us makes things even more fun because there's no 'getting to know each other' period.  We just start laughing and having fun from the minute they walk into the door.  And as luck would have it they are both signed up to rejoin us again in next year (twice!)

Posted by Bayou Salé GlassWorks at 9:58 AM